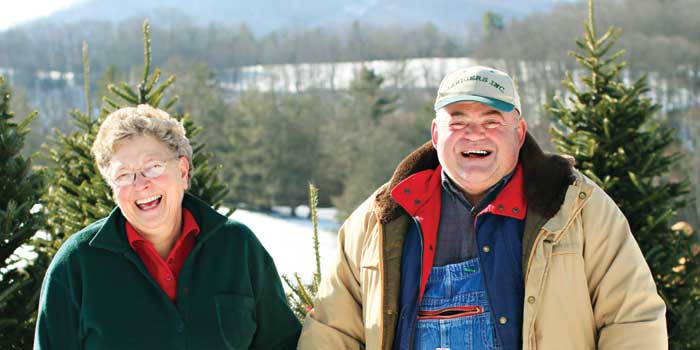 Editor’s note: This story originally appeared in the December 2011 issue of Our State.

The phone rang around 9 o’clock on Christmas Eve. Gary Brown lounged in his recliner, another hectic, holiday sales season in the books. His family filled his home — four daughters, their husbands, and a tangle of grandchildren — all raring to get on with the Christmas Eve tradition of opening presents. They had already gobbled down another Christmas Eve tradition: Lynda Brown’s homemade chili.

But just then, a policeman in the nearby town of Boone called about a woman who’d been in a wreck earlier in the day. She had two children. And she needed a Christmas tree. Could he help?

Send her out, Brown told the officer.

The woman came and used a flashlight to find a tree. Brown asked if she needed a stand. She told him she would stop at Wal-Mart and buy one. “Ma’am, you won’t go to Wal-Mart,” he said politely. “Wal-Mart closed at 6.”

He fashioned a stand from a piece of plywood, nailed it to the bottom of the tree, and sent her on her way.

“It’s a feeling of satisfaction when they find what they want and they get the experience they want,” says Brown, co-proprietor of Brown’s Choose & Cut.

Brown and his wife, Lynda, planted three rows of Christmas trees in the front yard and a few in a field beside their home about three miles north of Boone in the late 1970s or the early 1980s, after hearing about a fellow over on Winkler’s Creek who sold white pines for holiday decorating.

They wanted another way to scratch money from the fertile land where Brown’s father moved with his mother and grandparents in 1919, and where Gary and Lynda have lived for all 41 years of their married life. They already produced other crops to eat and sell — tomatoes, potatoes, broccoli, and cabbage. Their friends and neighbors used to joke: What will the Browns sell next?

“We enjoy the people that come, and we want each person to be happy and pleased with what they take home with them,” Lynda says. “We just enjoy the families. Over the years, we have seen their children grow up, and some bring their grandchildren now.

“It’s a lot of work. But I think we have fun, and I think all the people that come have fun, and most of the time, they find what they need. If they don’t, we’ll send them down the road.”

The Watauga County Christmas Tree Association lists 28 choose-and-cut farms in its 2011 brochure, which notes that Watauga is known as the choose-and-cut capital of North Carolina.

Each year, the Browns also plant a pumpkin patch and welcome groups of children — as many as 600 in a season — to visit and take pumpkins home. Their huge vegetable gardens (they grew 200 tomato plants this year) produce enough for themselves and plenty for family, friends, and neighbors.

Latched to the land

Brown never strayed far from the farm. He hadn’t even seen the ocean until he and Lynda visited friends in Florida last fall. He wore his overalls to the beach, got down on his knees, and scooped up a handful of sand from the water. He’s not itching to go back.

A state champion wrestler in high school, Brown took his wrestling skills to Appalachian State Teachers College in Boone, which was renamed Appalachian State University by the time he finished in 1968 with a degree in health and physical education. He taught school for two years in Lincoln County, but he drove home every weekend. He ended up moving back home, getting married, and teaching for eight more years at Blowing Rock Elementary.

He then worked at a farm and garden-supply store; on the grounds crew at Appalachian State; and with the soil conservation service, where he stayed for nearly 20 years until his retirement in 2004.

Lynda, who grew up about seven miles away, gave up her job at Appalachian State about nine months after the couple married. She devoted all of her energy to tending to the children and the farm. Lynda recalls selling several Christmas trees in the early days when no one else was there to help. She didn’t know how to use a chain saw, so she used a handsaw.

Big, strapping sons make good farmhands, but the Browns do fine with their four girls.

“I’ve got two girls that can work a horse just as good as I can,” Brown says.

He remembers one time when he and his young daughters were out plowing and a fancy car passed on the highway. The car stopped, turned around, and came back. The driver pulled that fine car right out into the field. He apologized.

“I had to come back and prove to my wife that was a girl working that plow,” the man said.
Brown still uses horses to cultivate his fields. He calls the antiquated practice his therapy. He uses horses for his Christmas tree business, too. Buck and Roscoe pull wooden sleds, carrying the trees and children (and the occasional adult who insists on riding).

Christmas-tree growing is year-round: spraying for pests in the early months of the year; fertilizing and planting seedlings in April; mowing and spraying in May, June, and July; trimming branches for a fuller tree and a desirable shape in August and September. Lynda and one of the girls start making wreaths in mid-November; then for almost two months, with the help of their daughters and sons-in-law, the Browns cut and sell trees seven days a week.

Occasionally, they get away. Every fall and spring, they go to horse sales. Twice a year, they head to the Hillsville Flea Market in Virginia.

He built a barn to store his old stuff — wash tubs, hinges, pitchforks, plow points, tobacco knives, chamber pots, enamel dishpans, walking canes, saw blades, a horse-drawn fertilizer spreader, an old corded bed, and dozens of other objects stacked on the floor, or arranged on shelves, or hanging from the ceiling.

When Brown was a boy, his father brought home white pines he’d cut in the woods at Christmastime.

“You can’t hardly give a white pine away now,” Brown says. The branches are too spindly. The first Christmas trees Brown planted on his farm were a mix of Fraser firs and blue spruce. He later cut down all the spruce and burned them. The beautiful trees are unpleasant to handle: “You sell somebody one, you won’t sell them another,” he says. “They’re so sticky you can’t hardly decorate them.”

A wooden sign on a hillside about 100 yards south of Gary and Lynda’s gravel drive announces Brown’s Choose & Cut. Behind the sign, on a taller hill, is a postcard backdrop: thousands of triangle-shaped evergreens standing in neat rows.

It’s there on that hill — with a view of Elk Knob State Park to the west and bottomland to the east where Howard’s Creek makes a horseshoe turn — that Christmas tree shoppers walk up and down the rows each fall, searching for the perfect tree to haul home and decorate.

People come from as far away as Florida and New York to buy their trees. Some people take an hour to make a selection, others five minutes. A few want to cut their own trees. Most do not. Some want a tall, skinny tree, others a short, fat one. Still others want trees left untrimmed.

There’s no accounting for taste. Gary remembers walking through the field with a shopper who stopped beside a tree that was “dead brown” about a third of the way up its trunk. The woman told Brown that was the tree she wanted to buy.

Chip Womick writes for The Courier-Tribune in Asheboro and is the author of Remembering Randolph County: Tales from the Center of the Tar Heel State. View his archived stories here.