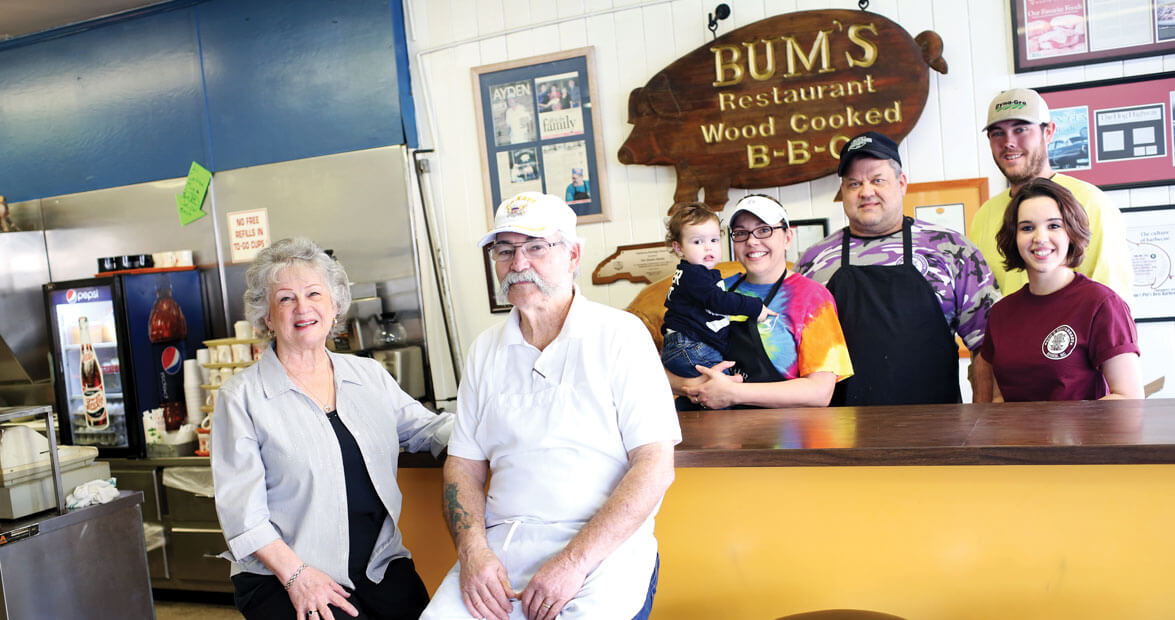 Purveyors of barbecue aren’t shy people. They can’t be shy. They live in a world where even being great isn’t good enough, and that’s a tough row to hoe. For a business that’s mainly about killing pigs and putting them on a grate above a lot of hot coals, the barbecue business is lousy with superlatives. Rare is the joint that doesn’t claim to serve the best barbecue in the world! I know, because I’ve had supposedly the best barbecue in the world at any number of different places. It’s the culture of meat, for the most part, I think. Not a few steakhouses boast the best steaks, hamburger stands the best hamburgers. But no vegetarian restaurants go that far out on a limb: As good as a salad can be, claiming to be the best salad in the world! simply doesn’t confer much swagger.

One of the things I love about Bum’s Restaurant in Ayden, though, is that they do what they do so well they don’t need a big sign recklessly proclaiming their excellence. The restaurant is about as unpretentious as a middle school cafeteria. It’s a brag-free zone. Even on the window, where a well-placed brag is the expectation, all you get is a painting of a pig, who looks a little despondent as it considers its fate; the modest name, Bum’s; and this, the single most important fact of all: WOOD-COOKED BAR-B-CUE. That’s what Latham “Bum” Dennis and his son Larry do: They make wood-cooked eastern-style barbecue. That’s it, these fellows are saying. This is who we are. Take it or leave it. My advice: Take it.

Ayden is a cozy town. All the houses seem to have wrap-around porches and vestibules, and they’re just this side of stately. Most, I’d guess, are just a year or two away from being on the historic register. The city of Greenville is just 20 minutes away, but Ayden is teeny: About 5,000 people live here. Downtown appears to have just one main street (two, if you count the traffic going the other direction). I’m a little embarrassed to admit that I got lost, even with my GPS chattering directions at me. I couldn’t find Bum’s to save my life, and though what I’m about to write sounds like something I would make up for this article, it’s not: I smelled my way to the restaurant. I followed my olfactory GPS. There were no fireworks, no red, white, and blue flashing arrows pointing the way. All the advertising Bum’s needs is the aroma of a pig in the smokehouse.

The restaurant’s name is derived from something that happened during the first few weeks of Latham Dennis’s life. Latham, who now sports a silvery handlebar mustache, founded Bum’s back in 1963. When he was born, his mother couldn’t think of what to name him; she just couldn’t come up with something that really worked for her. Weeks went by. People said, “He needs a name. A man without a name will grow up to be a bum.” Eventually she named him Latham, but he did indeed grow up to be a Bum, if in name only.

Larry Dennis, Bum’s affable son, pretty much runs the place now, but Bum himself is still here if you want to say hello, coming around to serve breakfast about 5 in the morning. Larry gets in around 4 a.m. and does everything there is to do to make the barbecue except kill the pig. He cuts the wood — oak and pecan, every stick of it — and burns the coals that fire the pig — everything.

Shirley has her own parking space in the little lot outside. There’s a placard there with her name on it and, beneath that, another smaller sign that says, “Don’t even think of parking here.” But people still do think about it, and some actually do it. When the restaurant expanded — there’s an overflow room to the left as you enter — Shirley decorated, and it’s here she indulged her passion for Gone With the Wind. On the walls are portraits of Rhett Butler and Scarlett  O’Hara — Clark Gable and Vivien Leigh — sporting their antebellum duds. Even in the men’s restroom — the only restroom this not-so-intrepid reporter allowed himself access to — photos of Gable as Rhett line the walls. I’d bet the farm that Vivien Leigh is in the room next door, but I never asked.

There’s another barbecue restaurant in town, The Skylight Inn, owned by a cousin, and I ask Larry if he could tell the difference between Skylight’s barbecue and his own if he tasted them wearing a blindfold. He says he could tell, for sure, because his own chunks are chopped bigger. It’s that simple to him, that small a difference between the two: chunk size. I’m not sure I believe him. I think he just doesn’t want to brag.

But it’s in further conversation with Larry that I discover a deeper truth: There’s always a superlative in this business, even when — maybe especially when — there doesn’t appear to be. Larry tells me he’s the last in a barbecue-making line that goes back almost too many generations to count. The Dennis touch began with his great-great-great-great …

I ask him to stop so I can write this down. “Six greats,” he says. Furthermore: “People have been cooking with wood for 500,000 years. We just never stopped.”

He doesn’t make a big deal of it, but basically what he’s saying is that Bum’s barbecue has been around since way before the beginning of civilization — which is something to brag about. At the same time, I can see why they wouldn’t put it on the window.