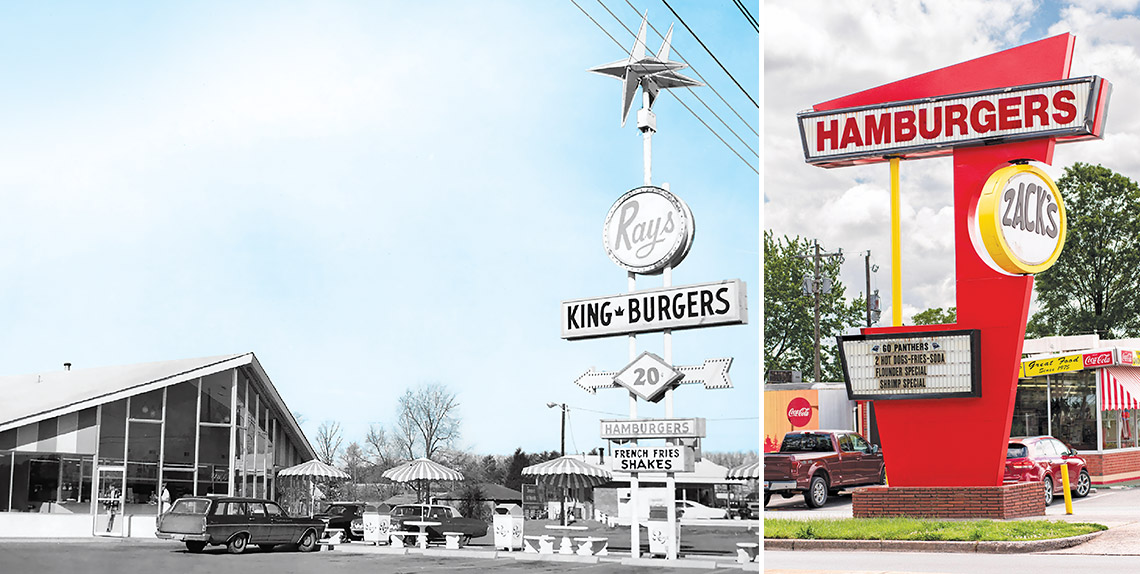 Buck’s Restaurant, Asheville’s first drive-in, changed the way locals ate burgers. Opened just after World War II, John “Buck” Buchanan’s convenient fast-food spot on what’s now Tunnel Road quickly became a hit, and two new drive-ins, Babe Malloy’s and Wink’s, soon followed. Teenagers often drove between the “Big Three” to see where their friends were hanging out. Although the Big Three are gone, Buck’s, in particular, is still remembered for its popularity — and its sightings of celebrities, like Mary Pickford and Grace Kelly.

Dewey Skeen put Morning Glory restaurant on the map with the creation of what came to be known as the “Skeen Burger.” Customers could order it nine different ways, but the ingredients of the patty itself remain a mystery (speculations include applesauce, Ritz crackers, and onion salt). Skeen was known to make customers wait as he scraped the grill between each order with a razor blade held by a pair of pliers. Today, the building is home to S&S Grill, and the Skeen Burger lives on only in memory.

E.L. Bost and C.W. Bost (no relation) founded their popular chain in Kannapolis before opening more than a dozen locations across central North Carolina. Six original restaurants remain, most of them just north of Charlotte near Concord, Kannapolis, and Mooresville. (Four of those locations are run by E.L.’s son, Mike Bost.) Although the menu doesn’t say it, real What-A-Burger fans know to ask for their burger “all the way”: a four-ounce patty topped with chili, coleslaw, and diced onion.

Bruce Garner opened the first Char-Grill restaurant in 1959, modeling it after the city’s first fast-food hamburger grill, The Charcoal Grill. Raleigh residents would pull off Hillsborough Street at the sign declaring “Char-Grill: Home of the Hamburger Steak Sandwich.” The small, cinderblock structure only offered takeout, made to order. Current owners Ryon Wilder and Mahlon Aycock have since expanded to nine locations across the Triangle area, including one at the Raleigh-Durham International Airport to welcome travelers with a taste of our capital’s history. 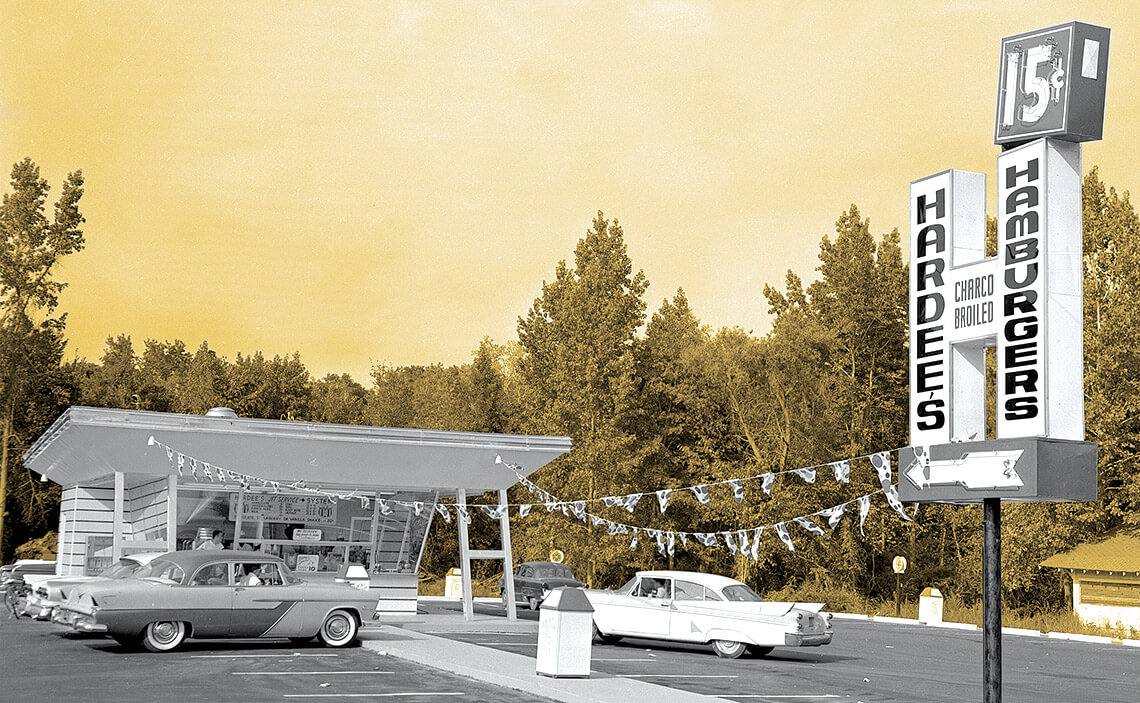 On September 3, Greenville welcomed a simple drive-in with 15-cent charcoal-broiled burgers, 10-cent fries, and 20-cent shakes. Martin County native Wilbur Hardee, who’d been a Navy cook during World War II, opened the burger joint close to East Carolina University’s campus. He later opened a second location in Rocky Mount before signing away his ownership of the franchise in a bad business deal. Today, Hardee’s is a nationwide success and one of the largest fast-food chains in the country. 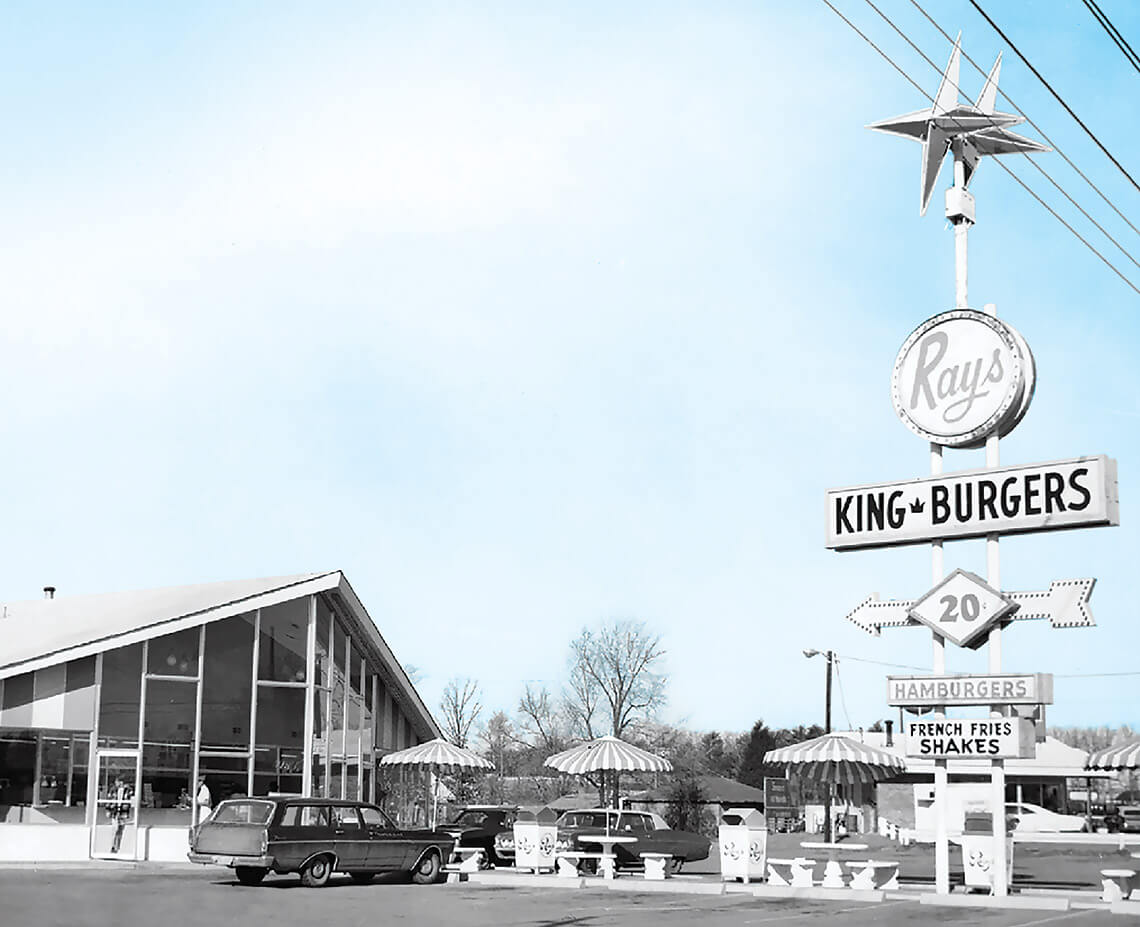 With the rising popularity of fast-food chains across the country, Mount Airy restaurateur Ray Goad Sr. decided to jump on the trend. He opened Ray’s Kingburger on the U.S. Highway 52 bypass with a high-quality burger that rivaled that of the up-and-coming McDonald’s. He also revolutionized the industry by becoming the first burger chain to serve breakfast, including a country ham biscuit made using his mother’s from-scratch biscuit recipe. Within just five years, Goad had 15 locations across the Piedmont and even as far away as Boone. That number eventually grew to around 40 restaurants.

Two married couples, Chris and Kathy Zoumbos and Constantine “Gus” and Margaret Koutris, started Burgerland in western North Carolina in 1971, when they opened their first location in Candler. Gus and Chris went on to open a walk-up Burgerland in downtown Asheville in 1980, transforming a nearby parking lot into an outdoor garden so that downtown workers could enjoy eating outside. Gus also co-owned the Asheville Motor Speedway and, on one occasion, made more than 5,000 burgers for Grand National night when Richard Petty was in attendance. 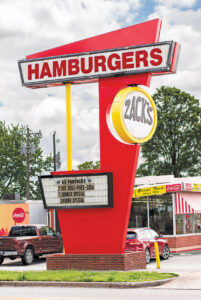 Zack’s Hamburgers was a Charlotte icon. photograph by BRUCE VANLOON/ALAMY

James and Anna Demopoulos opened this 1960s-style restaurant on the corner of South Boulevard and Scaleybark Road, cooking up flat-top burgers, milkshakes, hot dogs, and onion rings with their sons, Zack (the restaurant’s namesake) and George, and their daughter, Bessie. In 1990, George and his wife, Elaine, took over the restaurant and continued to satisfy customers with the Zack’s Special: two ground-beef patties with two slices of American cheese, lettuce, tomato, pickles, onions, mayonnaise, and special sauce sandwiched between toasted sesame buns. The restaurant closed in July 2021 after 46 years of serving the community. 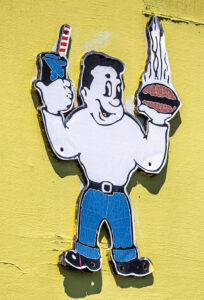 The bright exterior of Greensboro’s Beef Burger made it hard to miss. photograph by WOODY MARSHALL

This restaurant was the last remnant of the Biff-Burger franchise. The company dissolved before Greensboro franchisee Ralph Havis could renew his contract, leading him to rename his popular restaurant Beef Burger. Although no longer legally associated with the original, Havis kept the same broiling method, the famous sauce, and even the Biff Boy mascot. He operated the brightly colored landmark until his death in 2021, when it closed permanently.

Morris Reaves started this fast-food burger chain with a single drive-through-only restaurant on Randleman Road in Greensboro. Cook Out soon became popular for its fresh chargrilled burgers, affordable combos, and more than 40 milkshake flavors. Today, Morris’s son Jeremy runs the business, which has more than 250 locations throughout the Southeast, most of them in North Carolina. 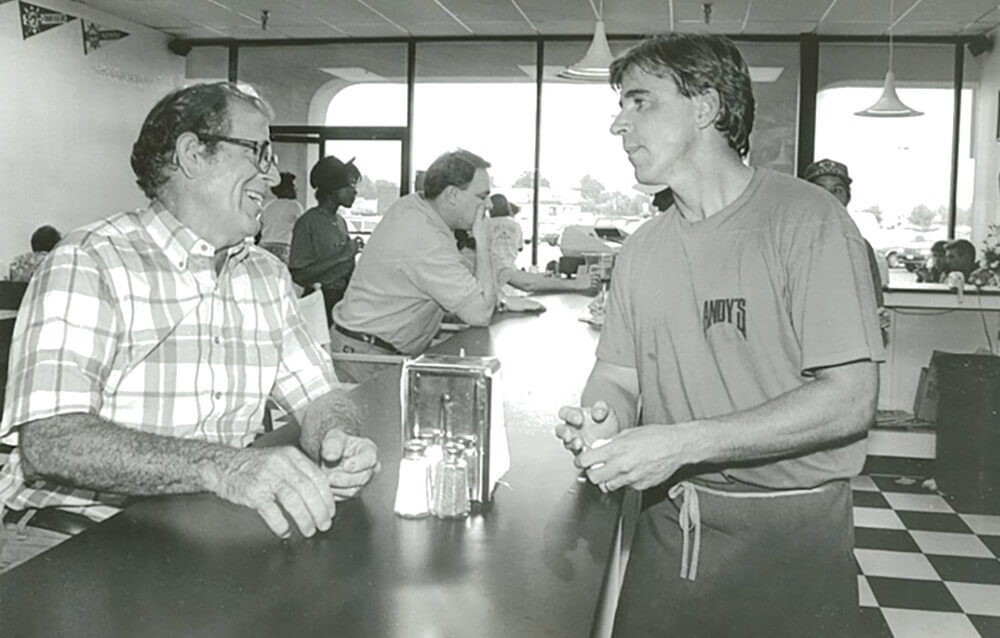 Before it was renamed Hwy 55 in 2012, this franchise was known as Andy’s. Photography courtesy of HWY 55 BURGERS

Kenney Moore started this restaurant franchise in a shopping mall under the name Andy’s Cheesesteaks & Cheeseburgers. In the beginning, Moore cooked every burger himself and enjoyed chatting with customers who sat at the counter while he grilled. In 2012, Moore gave the business its current name and had maps of its namesake highway painted on the walls of its more than 130 open-grill locations.

Dan Watts, Smith Gaddy, and Tom Gaddy opened what was originally called Burgermeister New Orleans Grill in Pack Square, serving traditional burgers and Cajun-style dishes like seafood gumbo and catfish po’boys. The downtown location eventually closed, and the owners sold their VeggieMeister burgers wholesale to grocery stores and restaurants. In 2003, Tom and his then-wife, Chantal Saunders, opened Burgermeister’s Kitchen and Tap in West Asheville, specializing in big, hearty burgers with gourmet toppings — like the Meister, half a pound of smoked beef marinated in Guinness stout — for the next 10 years.

This inventive restaurant chain was started by Dennis Thompson and Frank Scibelli in Charlotte’s Dilworth neighborhood in the middle of the Great Recession. Despite the economic crisis, Bad Daddy’s gained popularity for its creatively named, gourmet-style burgers. Customers can sink their teeth into the Sam I Am (American cheese, fried egg, rosemary ham, and pesto) and Magic Mushroom (sautéed mushrooms, Swiss cheese, creamy truffle aioli, and arugula), among other burgers, sandwiches, and salads. Thompson and Scibelli sold the chain in 2015, but Bad Daddy’s continues to serve North Carolinians at locations across the state. 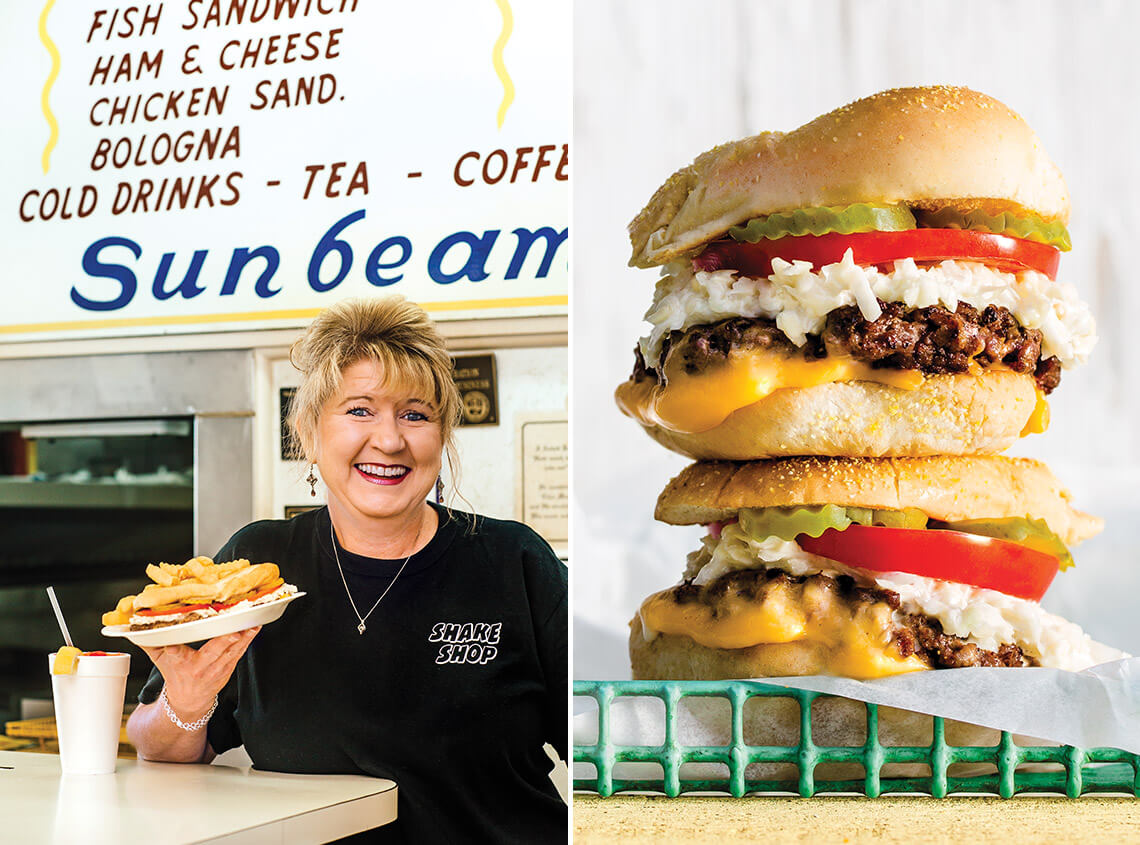 The Shake Shop’s signature meal, a Lottaburger, is stacked with slaw, tomato, and pickle. photographs by Tim Robison

For 40 years or more, old-fashioned burger restaurants have been feeding us the same simple, satisfying meals in an ever-changing world. John’s Drive-In in Kitty Hawk; Johnson’s Drive-In and Chris’s Drive-In in Siler City; Shake Shop in Cherryville; King’s Sandwich Shop in Durham; Central Café in Rocky Mount; Merritt’s Burger House and Pender’s Café in Wilmington; Brooks’ Sandwich House in Charlotte; and plenty of others continue to serve burgers the same way they have for decades. Whether cooked on the flat-top or an open-flame grill, wrapped in paper or served on a plate, a North Carolina burger is timeless.