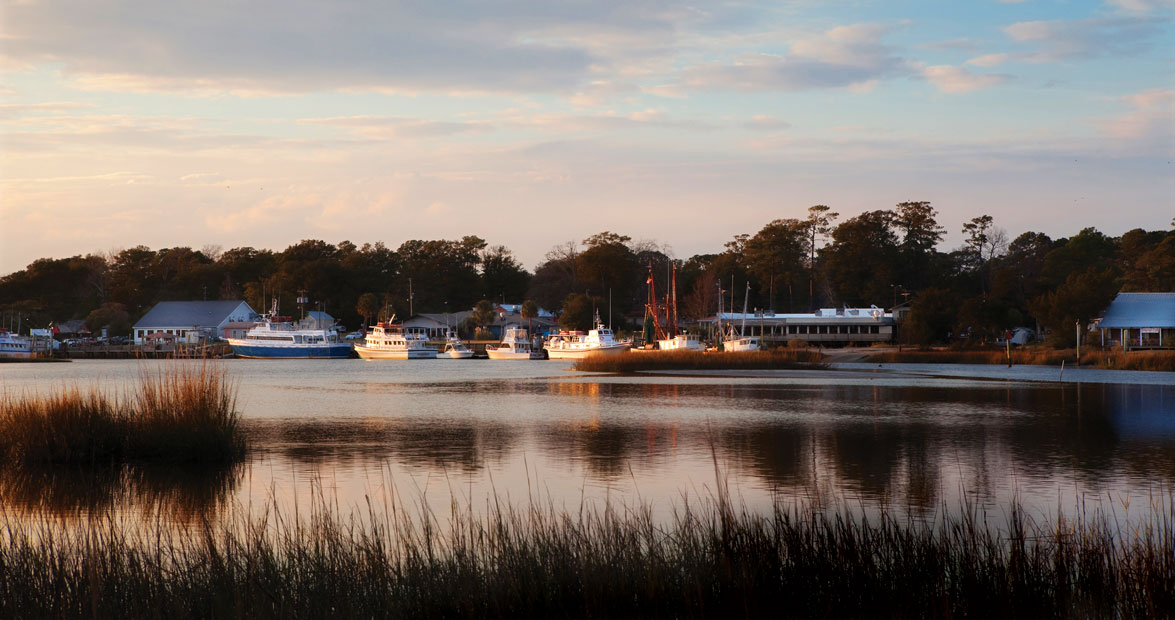 EDITOR’S NOTE: This story was originally published in March 2012.

The Calabash fleet is out fishing.

Right now, down the Calabash River five miles and out into the Atlantic Ocean, the trawlers are hauling nets full of shrimp, and the fishing boats are bringing in lines of fish.

Back at the docks, a half-dozen old-timers nurse coffee while leaning on the railing outside of Captain Nance’s Seafood, waiting for the fleet. Soon, a few hours before supper, the boats will come home.

The sound of the first boat coming up the river starts the parade. Another comes, and then another. Each one ties off at the dock. The smell of shrimp rises as the men unload their hauls.

In an hour, the decks will be clean, and the fishermen’s work will be done for the day.

But Calabash is just opening. The waterfront here works day and night. Every evening, Calabash’s population swells with people from all over who come for seafood, fried golden brown with a family recipe more than 60 years in the making. They come down to a row of restaurants near the water that helped give this tiny little town in far southeastern North Carolina the distinction of Seafood Capital of the World — where deep fryers created a style, and a radio host took it worldwide with six little words. 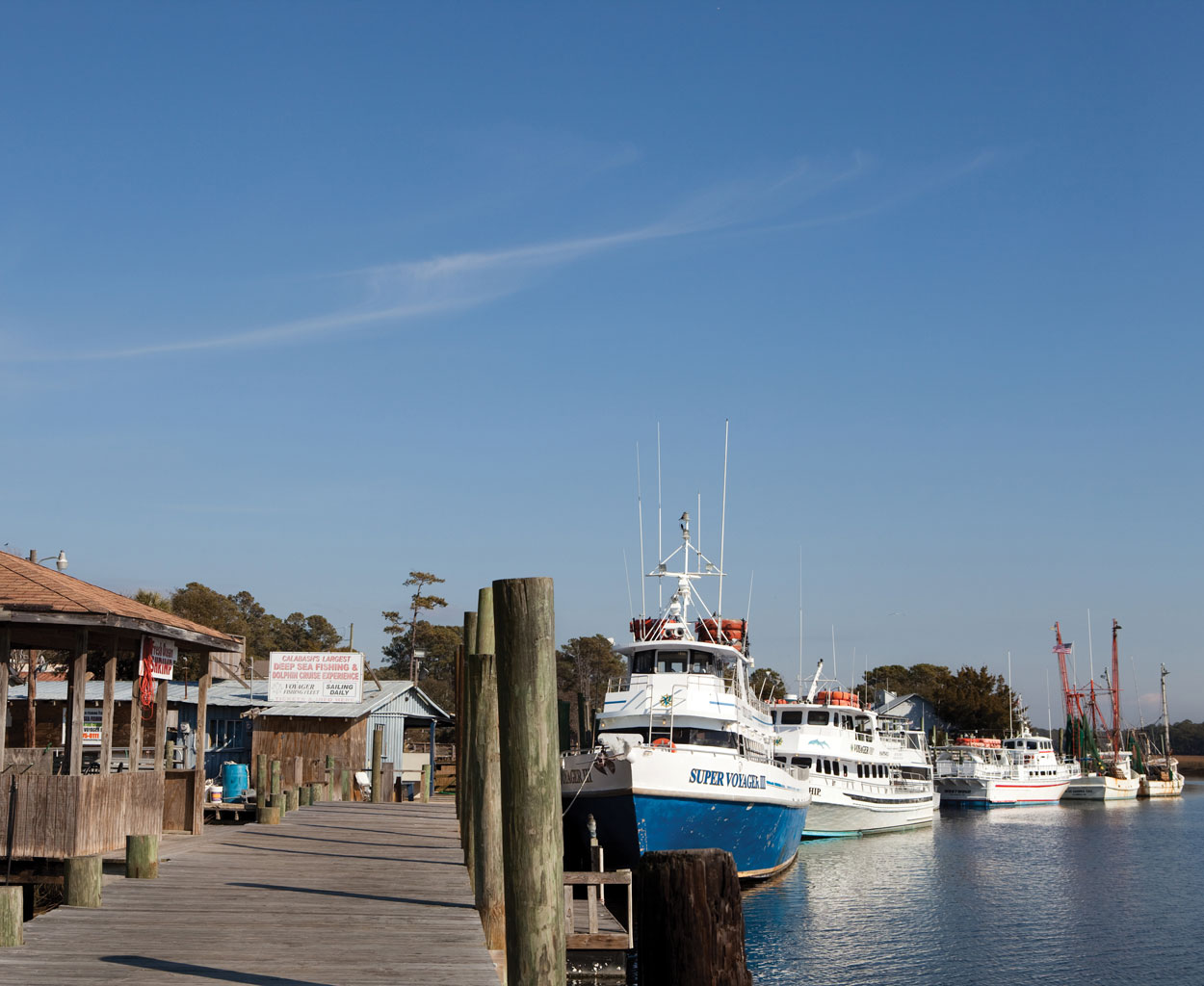 The Calabash fleet of working boats heads out early and comes home in the mid-afternoon, just before the dinner crowd fills the town’s seafood restaurants. photograph by Leslie Koehn

It was the 1940s, and Calabash was nothing more than a spot along the Calabash River where people lived off the water. At some point, Jimmy Durante, the national radio and television comedian and actor, came across the town. Soon after, he left a mystery at the end of every broadcast.

“Goodnight, Mrs. Calabash, wherever you are,” Durante said.

The sign-off became his signature, and the questions tantalized listeners for years. Was there really a Mrs. Calabash? If so, who was she? And was she, in fact, from Calabash?

“Oh, there’s no mystery to it,” says Clarice Holden, Calabash native and owner of Island Breeze in nearby Sunset Beach. “My mother, Lucy Coleman, is Jimmy’s Mrs. Calabash.”

Holden says that Durante came traveling through town and ate at The Original, the first Calabash seafood restaurant. He liked the food so much he asked for the owner. The owner turned out to be the lovely Lucy Coleman, and Durante told her, “I’m going to make you famous one day.”

Calabash first appeared on maps in the late 1600s as Pea Landing. The river and nearby ocean supplied much of the food, and the surrounding fields were thick with indigo and peanuts. The peanut fields remain today, but housing developments replaced the indigo. Fishermen take to the Calabash River to pull in their catches and sell them at market; they make their own suppers from the rest, just like their fathers and grandfathers before them.

Through the 1700s and early 1800s, Pea Landing grew slowly, one plantation then another showing up on maps. Over time, the riverfront near the dock began to formalize, and a commercial center of homes and businesses appeared. By 1883, Pea Landing’s people petitioned for a post office. Their request was denied because another Pea Landing already existed, so they named themselves after the most prominent feature in the area — the Calabash River.

This crooked river took its name from the crook-necked calabash gourd, a gourd that, when dried and hollowed, has been used as a dipper, ladle, bottle, and bowl by cultures around the world. The Calabash River, like its namesake, holds the livelihood and spirit of the town.

Calabash seafood can only originate from one place — here. Everything else is imitation. No matter how fresh the fish, how browned the batter, how seasoned the meal, anything else falls flat. It lacks the soul of Calabash.

Jane Schultz was from Calabash and made a career out of singing, and she might have been Mrs. Calabash.

Schultz joined Durante’s band for a few years, but left at the start of World War II. At the time, people of German and Japanese descent faced prejudice here in the United States, and some stories say Schultz left the band to be with her family in Calabash.

Back home, Schultz found her treatment wasn’t much better. Military intelligence officers and local police searched the area around her home for hidden telegraph wires and signal devices used to communicate with U-boats hiding off the coast.

Some say that Durante came through Calabash to speak to Schultz to convince her to rejoin the band. She refused, but the sentiment from Durante and his band was strong enough to cause him to sign off every episode with a nod to her.

“Goodnight, Mrs. Calabash, wherever you are,” was his way of letting her know she was missed.

Kurt Hardee’s kitchen is thick with the smell of frying shrimp.

Hardee stands close to the fryers, tossing oysters in evaporated milk, then flour, then cornmeal, before putting them aside. He repeats the process with flounder fillets, then scallops. It’s lunchtime at his restaurant, Ella’s of Calabash, and the popular platters fly out of the kitchen.

“I grew up here,” he says, shaking shrimp from the fryer basket. “I don’t just mean Calabash; I mean Ella’s. And I wouldn’t trade it for nothin’.”

Hardee’s great aunt was Lucy Coleman, who may or may not have been Mrs. Calabash but who certainly opened the first official Calabash seafood restaurant. She opened Coleman’s Original in 1940. Her sister Ruth Beck opened Beck’s Restaurant shortly thereafter, and their brother, Lawrence High, started Ella’s of Calabash in 1950.

The people of Calabash, particularly folks in this family, insist that to be called Calabash seafood, seafood must be made in Calabash. Their influence spreads across North and South Carolina, into Virginia and West Virginia, and even as far away as Michigan. In all of those places, restaurants claim to serve Calabash-style seafood. And although they aren’t the real thing, they do serve as a tribute to a food, a place, and a way of living.

In the 1930s, oyster roasts were regular occurrences on Calabash’s docks. Sometimes roasts happened after a visiting minister delivered a sermon from the back of his boat and rid sinners of their crooked ways with a river baptism. Sometimes those roasts were just any other celebration.

By 1940, Lucy Coleman formalized these roasts by building a shelter complete with picnic tables and dirt floors. Only steps away from the docks, The Original became the place to be in Calabash. Soon she went from roasting oysters to breading and frying fish the way her family had done it for years: putting fresh fish in evaporated milk, then in flour seasoned with salt and pepper, then in cornmeal, and then into a deep fryer for two minutes. To her surprise, she sold plate after plate of it.

In 1966, Jimmy Durante was invited to the National Press Club where he took questions from the media. Overwhelmingly the most popular was, “Who is Mrs. Calabash?”

“Years ago, the Mrs. and I used to drive cross-country, and we came across a beautiful little town,” Durante said. “We stopped there overnight, and she loved it, really loved it. I was playing piano then and said as soon as I’m rich, I’ll buy that town. So, gentlemen, Mrs. Calabash that I refer to all the time on our radio show and television program was Mrs. Jeanne Durante.”

Jeanne was his first wife, and she died in 1943, making it possible that their layover in Calabash and dinner at Coleman’s Original actually happened.

For a few years, the question was settled. His fans had their Mrs. Calabash, and the town went back to being a seafood haven.

After Durante admitted to the National Press Club that his wife, Jeanne, inspired his famed sign-off, the mystery seemed solved.

But then a young girl from Calabash, Cathleen Moore, wrote Durante a letter asking him if Mrs. Calabash was Lucy Coleman.

He replied with an autographed photo that offered no commitment, only the line, “A pleasure believe me.”

“The trouble with the Mrs. Calabash stories is that every one is just unbelievable enough to be believable,” says Anthony Clemmons, who was born in Calabash and served as the mayor for 21 years and now acts as the town’s unofficial historian.

Whether the real Mrs. Calabash is Lucy Coleman, Jane Schultz, or Jeanne Durante doesn’t matter much; the story stuck, and the legend grew. Have dinner in Coleman’s Original, Beck’s Restaurant, and Ella’s of Calabash, and you’ll find that each restaurant has its own version of the tale. Ask a resident, and you’ll hear yet another.

Cathy Altman grew up in Calabash and heard every story. She has a different take on it.