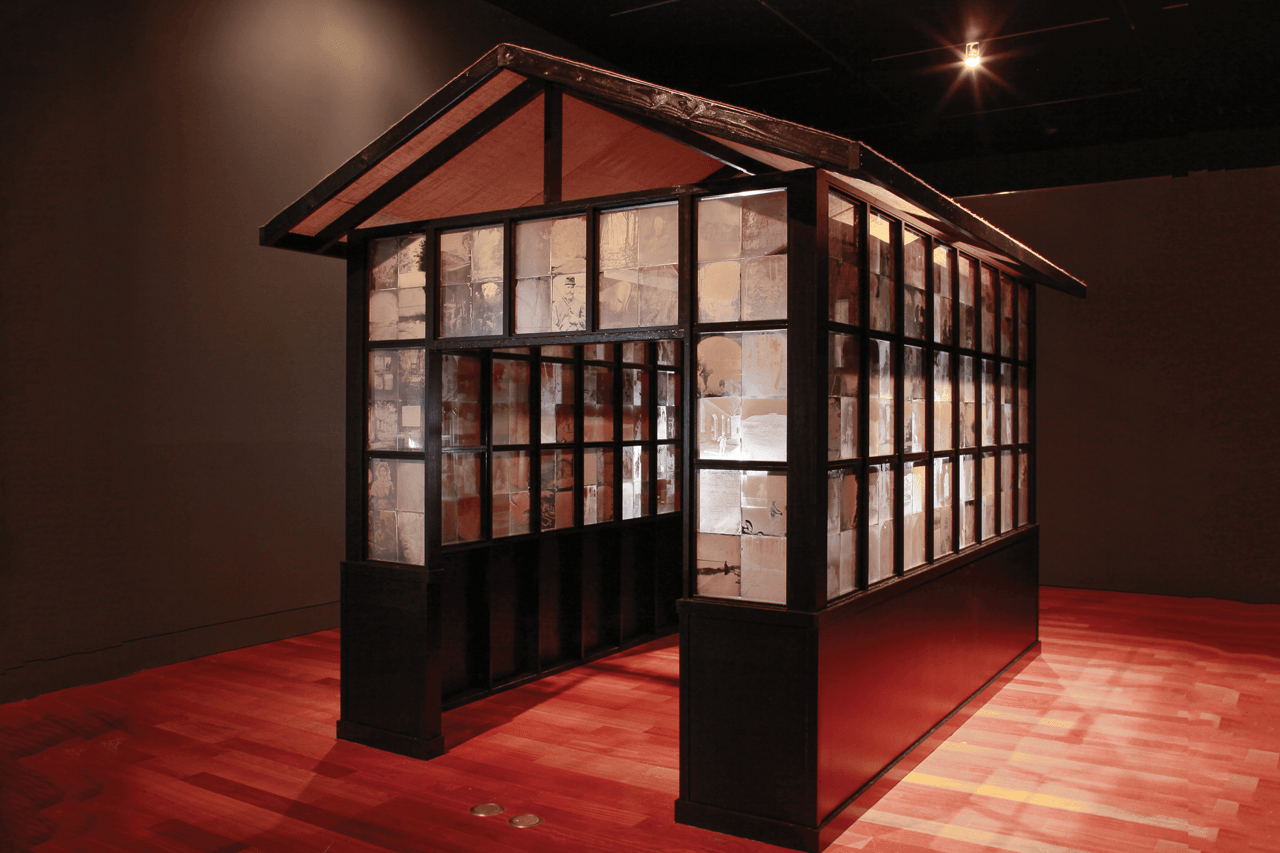 Ghosts are everywhere at Fort Fisher: in blue uniforms and gray, wandering the fields and dunes. They patrol and pace the earthworks, turn watchful eyes to the river and sea. Later, they’ll clash in battle, then dissipate in the salt air. But they’ll be back.

If Harry Taylor has his way, some of them will live forever.

Huddled in a dim room, using formulas and methods from the 19th century, he captures the visages of these ghosts on glass plates. Some will make their way to Wilmington’s Cameron Art Museum as part of Requiem Glasshouse, an exhibit of Taylor’s ambrotypes and other collodion-process glass-plate negatives of landscapes, historic sites, models, and  reenactors around Wilmington.

The exhibit is no simple gallery hanging of prints and image-imbued glass plates. Rather, Taylor calls Requiem Glasshouse a “greenhouse of glass negatives,” and that’s what it is: 280 wet-plate negatives installed in a greenhouse-like structure.

“[It] plays on the myth that Ken Burns perpetuates, that Mathew Brady’s images ended up as greenhouse glass,” Taylor says.

Taylor is referring to Burns’s 1990 PBS miniseries, The Civil War, in which he makes the greenhouse claim. In a 1993 commencement speech, Burns said, “Glass-plate negatives were often sold to gardeners for the glass itself. In the years immediately following Appomattox, the sun slowly burned the filmy image of the war from countless greenhouse gardens all across the country, as if the memories might be erased.”

“We can’t find any definitive evidence of that,” Taylor says. “In fact, when Requiem Glasshouse went up, Bob Zeller, the president of the Center for Civil War Photography, told me that Brady’s negatives were all accounted for.”

But Taylor’s Requiem Glasshouse does more than correct the myth. Burns says, “as if the memories might be erased,” and that seems to be the psychic center of Requiem Glasshouse: in memory and the preservation of it.

“We remember in fragments,” says Taylor. “That idea is something that’s always appealed to me.” 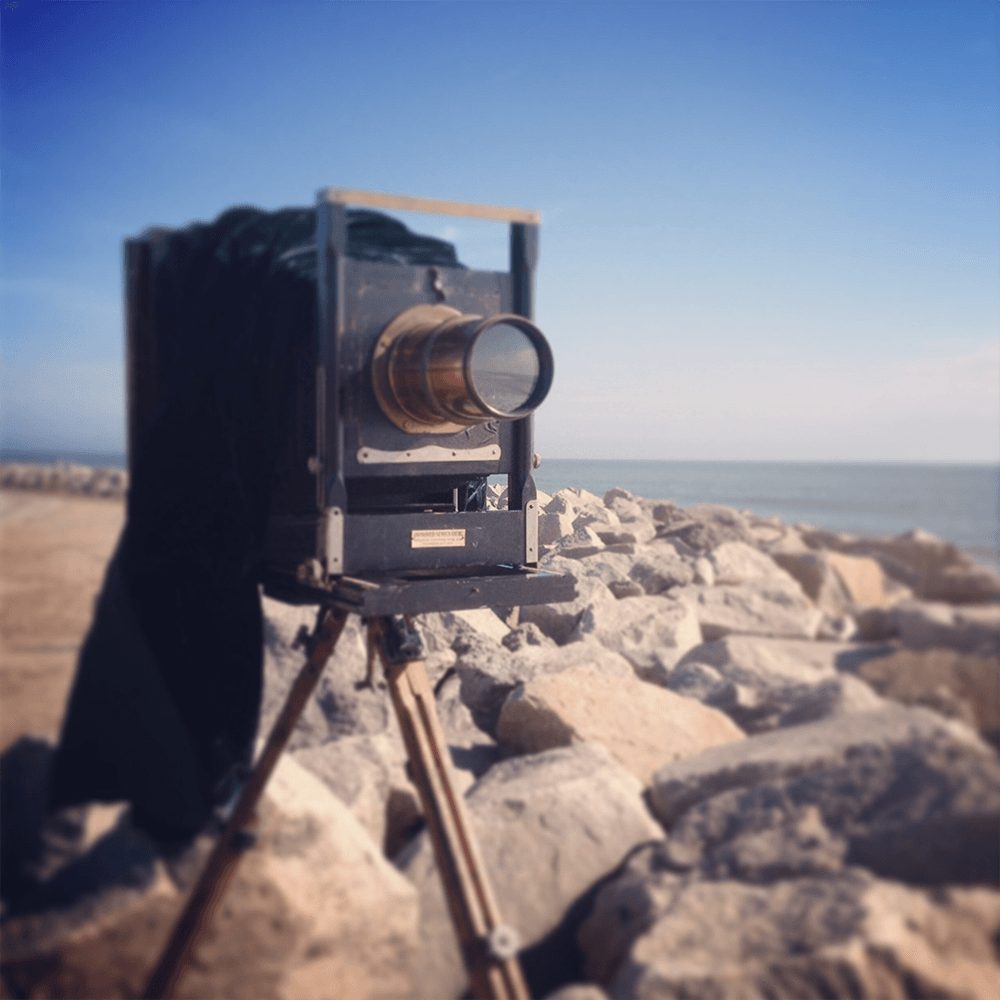 As the son of antiques traders, Taylor has been surrounded by fragments of the past his whole life. A house full of artifacts and an attic filled with trunks meant ample opportunities to look through boxes. Somewhere along the line, he fell in love with the tintypes, daguerreotypes, and ambrotypes of solemn-faced men and women.

His parents did what any antiques-loving parent would do: bought him antique cameras. Taylor learned how they worked, built his own camera from parts, and began shooting.

“By the time I was in my 20s, I was into digital,” Taylor says. “With digital, you can mimic just about anything, but it’s not the same as shooting with an old film camera, especially a large-format one,” he says.

But it wasn’t just the process or aesthetic Taylor was thinking of as he reintroduced antique cameras into his shooting; it was how the subjects treated being photographed.

“There was a solemnity to early photography,” he says. “In the 19th century, people were very aware of their personal dignity, so they come across as stern in their photographs, but I like to think they’re solemn. After all, it is a solemn moment — this may be the only photograph they ever have taken.” 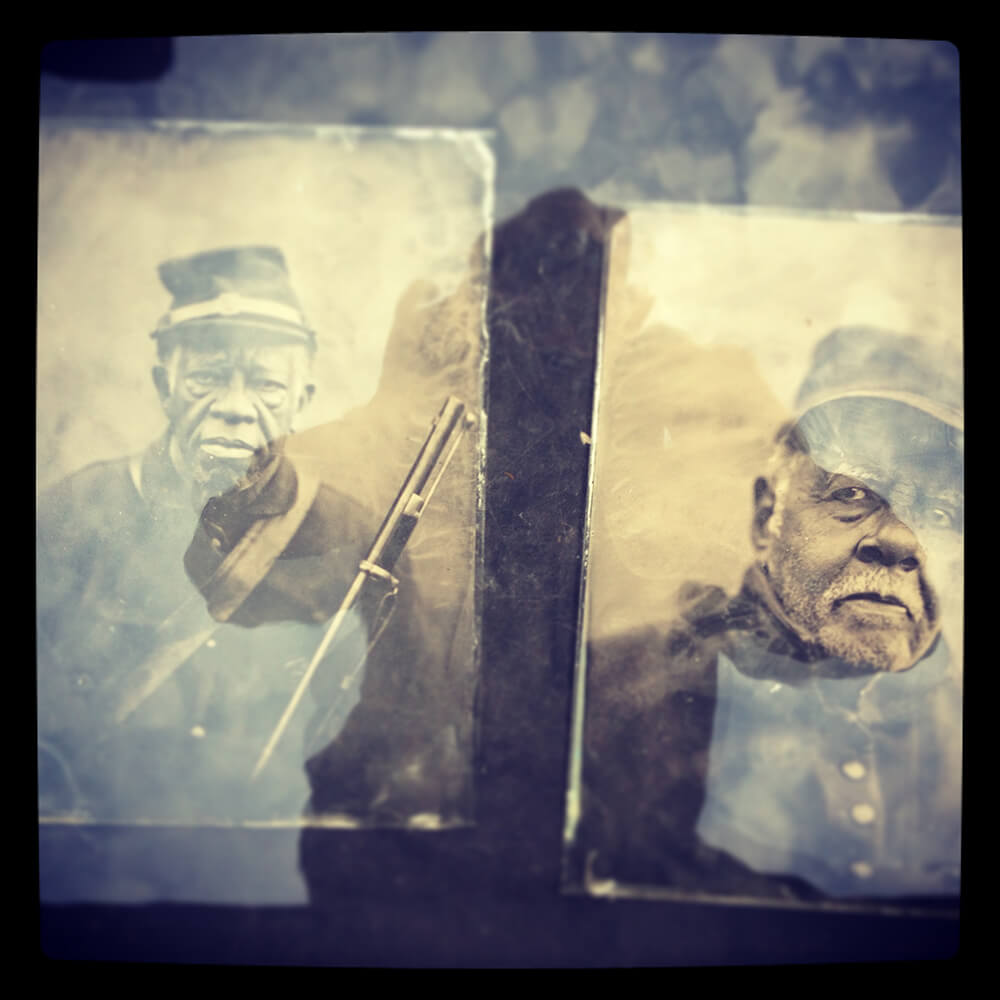 Those early photos were laborious. A photographer had to create emulsions and solutions to expose and then develop images, then apply the emulsions to glass plates. He would then look through his camera — at an image both reversed and upside down — and pull focus on his subjects. Then, he’d cover himself with his shroud, load a plate, remove the lens cap, and expose the image. After anywhere from two to 10 seconds for portraits, longer for landscapes, he’d transport the exposed plate to a darkroom, where he’d then develop it.

“A lot of my models are Civil War reenactors,” Taylor says. “In a way, that makes them ghosts. They inhabit the form and spirit of these people and actions and emotions from the past.”

In one of these reenactor portraits, an African-American man stares directly into the lens. A scar snakes across his nose. Smaller scars pock his face. He’s in the uniform of one of the USCT — United States Colored Troops.

“He is one of the USCT,” Taylor says. “Look at the scars. Look at his eyes. This is a man who’s seen combat. He’s a veteran, was wounded in Vietnam, and now has reached back into his past to grab hold of some fragment of his history.”