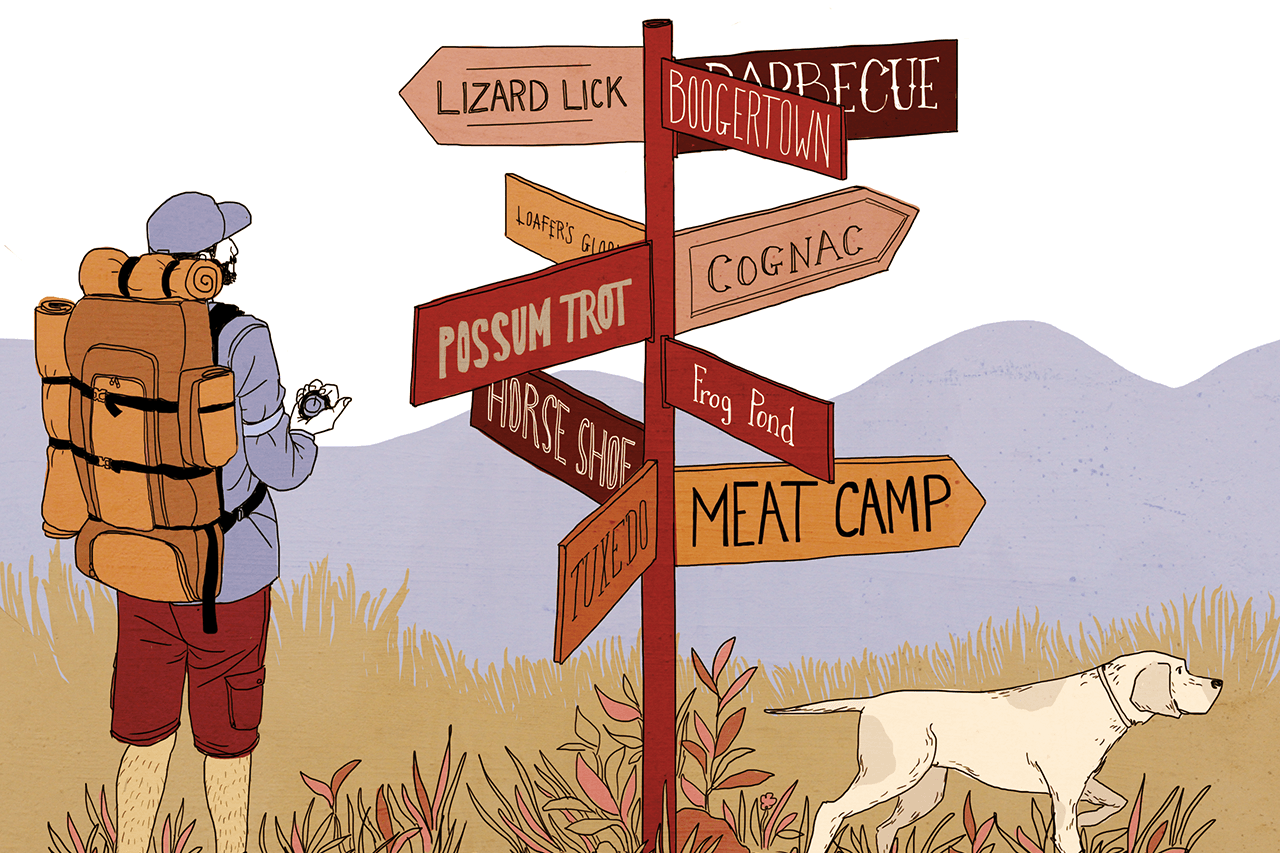 Loafers Glory
Do you wish getting something named in your honor were as easy as doing a whole lot of nothing? Well then, you should look to the men who spent their days kicking back on the porch of the general store of this Mitchell County town as an example. How glorious it is to loaf, indeed.

Welcome
The renaming process for this Davidson County town with a friendly moniker was fueled by a disagreement — imagine that. No one could agree on a name for the new railroad depot. There are two possibilities as to how exactly the town became Welcome: Either decision makers were impressed by the welcome sign above the community store’s door, or one man declared, “Everybody’s welcome here,” during the debate.

Meat Camp
Early hunters established a camp in this Watauga County town, where they would salt — surprise! — meat and keep hides.

Sunshine
Who wouldn’t want to live in a town called Sunshine? The Rutherford County community is shaded by nearby Cherry Mountain in the morning, but residents can easily see the sunshine at the top of the mountain.

Bath
This Beaufort County town was likely named after the now defunct Bath County, which honored John Granville, Earl of Bath. He was one of King Charles II’s eight Lords Proprietors for the Province of Carolina.

Hanging Dog
As one Cherokee story goes, a brave was hunting with his dog when a flash flood separated the pair. The man later found his dog, safe and sound, hanging high up in a tree.

Chocowinity
Named after Chocowinity Creek, the word “chocowinity” is said to mean “fish from many waters” in Skarure, the language used by the Tuscarora Native American tribe.

Pinetops
When passing through town, Henry Clark Bridgers, founder of the East Carolina Railway, noticed he could only see the tops of pine trees from the train.

Marshall
Though the name Marshall is not all that unusual, it is interesting that this Madison County town was named after John Marshall, former chief justice of the U.S. Supreme Court. One of the most influential chief justices of all time, he also served on the circuit court in Raleigh.

Mars Hill
Given the similar spellings of Mars Hill and Marshall as well as their geographical proximity to one another, you might think these town’s distinct existences are a map error. But Mars Hill was actually the Roman name for a hill in Athens, Greece, which holds Biblical significance.