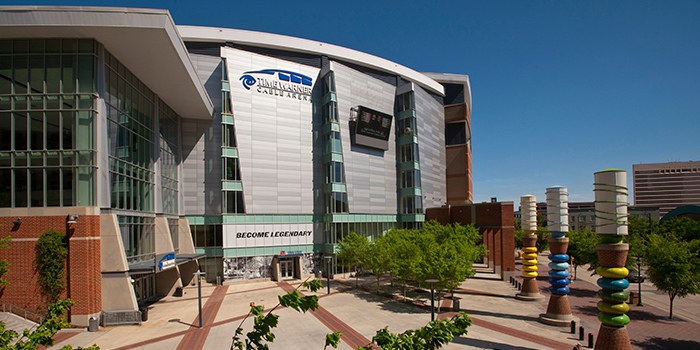 The Charlotte Bobcats – soon to be Hornets – have made a crafty move that sets their arena apart from other NBA venues across the nation and you can sum it up in two words: craft beer.

At the Craft Beer Garden on the second level concourse of Time Warner Cable Arena, friendly barkeeps serve up 18 taps worth of North Carolina brews from across the state, including several breweries from Charlotte. In the past TWC Arena has served craft beer, but never to this scale and never in a way that calls so much attention to our state’s booming brewing industry.

While I was taking in a late-season Bobcats game with a friend (the Bobcats won), we enjoyed N.C. beer along with a sizeable crowd of fellow fans. I’d heard about the Craft Beer Garden before we arrived, but I thought it would be less impressive and more of a kiosk than a proper bar. I was pleasantly surprised. The Craft Beer Garden’s long bar and array of tall tables draws you in, and the bartenders there know their brews and can guide you to one you’ll like (if the line’s not too long, that is).

Judging from the reaction of the other fans in attendance that day this is a welcome change from the typical arena beer. For a state that has 100 craft breweries and at least 20 more opening in 2014, I’m a little surprised it’s taken a major venue like this so long to showcase North Carolina beer.

The Time Warner Cable Arena Beer Garden can’t highlight all 100 breweries – that would be way too many taps and way too many choices – so instead they focus on nine breweries, each of which has two beers on the menu. Currently Mother Earth, Duck-Rabbit, Highland, Natty Greene’s and Foothills round out the statewide offerings; and NoDa Brewing, Triple C, Olde Mecklenburg and Heist Breweries represent Charlotte.

I thought the price was on point for these beers as well. With typical domestic arena-beers going for $6.50-7.50 for 16- and 10-ounce pours, the $8 and $10 (respectively) charged for beer born and brewed right here in North Carolina is a no-brainer. It’s fresher and more flavorful, and you’re spending money to support businesses in this state that in turn support other businesses in this state.

In 2013, craft beer brought in an estimated $791 million in North Carolina. My $20 contribution was only a drop in the bucket, but it will be interesting to look at the impact TWC Arena’s decision to put N.C. brews front and center has on the industry. With large numbers of sports fans and concertgoers from out of town paying a visit to the arena, the exposure these breweries, and North Carolina’s whole brewing industry, will receive is enormous. So, let’s raise a glass to TWC Arena and salute them for doing a service to our thriving craft beer industry. Cheers.

Jason Frye lives in Wilmington and is a regular contributor to the Our State Eats food blog. He has written for Our State Magazine, Haven, North Brunswick Magazine, and Wrightsville Beach Magazine.