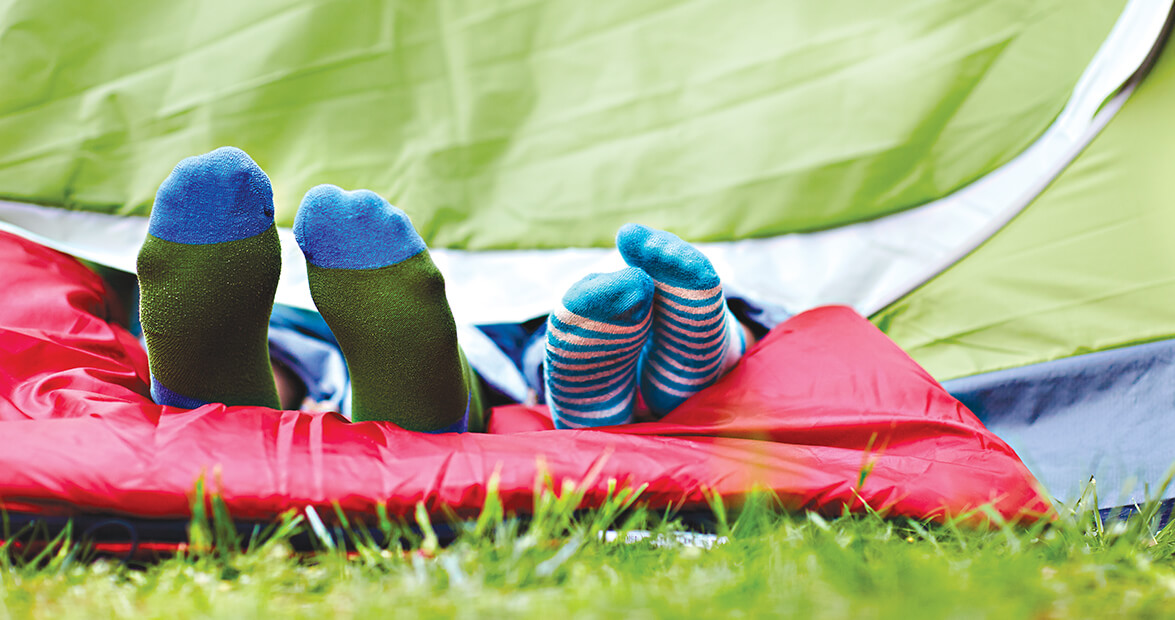 The original plan was to rent a tent from Campus Rec (I work at a university; said university has recreational facilities and equipment, both). We were never going to rent sleeping bags, though. The rental of coed sleeping bags seems a dubious prospect, even when considered in the very best light. Plus, we reasoned, the kids would love having their own sleeping bags. We’d use them for movie nights. Room-to-room sleepovers when the little one gets less little. But then I blew up half a stick of butter inside the microwave. We were making waffles. From scratch. The recipe wanted melted butter. In the aftermath of that incident, my whole belief system seemed to waver a little. If the inside of the microwave can look like this, I thought, who could say what else might befall us? We might need a tent someday.

So we bought a tent, too.

And let’s save ourselves the trouble of the tent poles-and-rain fly montage, some jolly song playing in the background while I nearly put my eye out trying to make a four-person dome from something that comes in a sack the size of two lunchboxes. Let’s slide past the moment when I’m still holding way too many stakes and haven’t yet discovered that there are more directions on the back of the directions. Let’s move directly to our 4-year-old, The Toad, tunneling headfirst into his sleeping bag, yelling out, “Where am I? Where am I?” Or to his little brother, The Wee, bedding down in his own bag, holding an open children’s umbrella in one hand, and in the other, a bear named Puppy who speaks in meows. Probably we’ll just use whatever college fund remains, when the time comes, for therapy for that bear.

The bulk of this exercise — the kids-on-purpose exercise — has been, for me, about learning to love the noise. My wife achieves this brand of Zen a little more readily than I do. Which was the look she kept giving me from the other side of the tent: Breathe. Take it in. So I did. I lay down on the ground, our ground, our own however-many square feet of North Carolina, and listened to the noise of our backyard. The boys, sure. But also: trains. From this yard, this little Greensboro hill, there are almost always trains. And birds, signaling the season. And dogs all up and down the street. Traffic out on the bigger road that’s a block behind the church. The bell tower in that church. Wind, high up in the huge sweet gums next door.

(Later, when it got dark, The Wee turned on his flashlight, held the business end of the thing against his open eye, and said, “Eyes. Eyes.” I’m noting that here just to keep from getting too sentimental. Too sweet-gummed.)

I don’t know what patch of land I know better than this fraction of an acre. The hydrangeas and black-eyed Susans and cornflowers. The poison ivy I poison a couple of times a year. The daffodils we planted; the ones that were already here. The green-blooming gladiolas that I love so much. The Kousa dogwood. The volunteer cherry tomatoes. Remember, kids, when Daddy used to garden? No, you do not. And although the neighbors may resent you, the crabgrass does not, nor the dollarweed, if that is indeed what’s replaced the fescue. What should we do about the hole over there, in front of the cherry trees, where the basement sump drains? You guys just want to keep riding your bikes through it? Good enough. And speaking of bikes: There are bikes, a plastic police car, a formerly battery-powered ATV, most of a basketball goal, the remains of a baseball tee, some kind of oversize nylon Frisbee — hey, please stop throwing mulch in the yard. Watch out for that flower bed. Careful of the azaleas. Please, just —

I hadn’t been in a tent in 20 years. Not since Boy Scouts. I was once on a campout so rainy that the tent next to ours cut loose from its moorings, and the kids inside floated by singing “Yellow Submarine.” But there was none of that on this backyard night. We didn’t even sleep out there. I have to tell the truth. We just wanted them to know what a tent was. The Wee would never have gone to sleep, and, by the looks of things, The Toad might not have crashed until sunrise. We did, though, let them stay up well past their bedtimes, and we lay on either edge of the tent while the boys went bonkers between us, laughing and bashing each other with their flashlights and making plans to fly us to the moon.

I loved it, OK? I loved being in that small square. I loved all of us in there. At one point, The Toad pulled on his brother’s leg, hard, and The Wee kicked him in the head. The Toad complained. You deserved that, I told him, but then apologized, pulled him to me, and then somehow each of us grown-ups ended up with one boy in a grown-up sleeping bag. That didn’t last for more than about 10 minutes, but nothing ever does these days. I had The Toad. My wife had The Wee. Breathe it in, she was telling me. I am, I was telling her. I am.