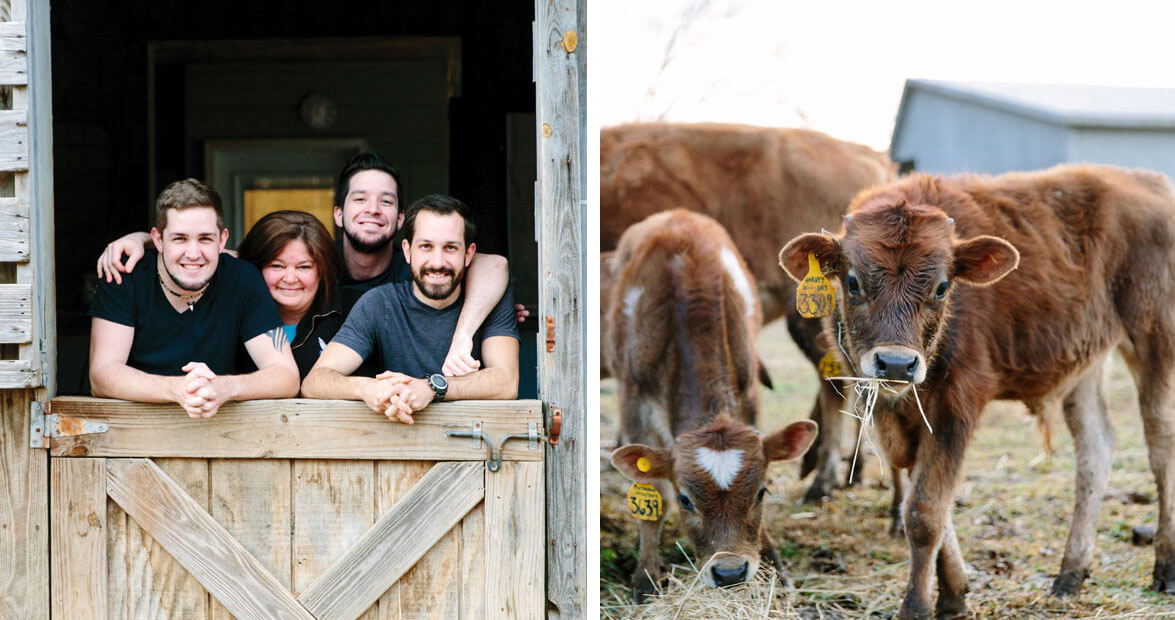 Cindy Hamrick looks out at her Jersey cows, clustered around a hay bale that her son Brandon has just offloaded from a trailer, and she can’t help but smile. “We love Jerseys because they’re so stinkin’ sweet,” she says.

Jersey cows are known for their big brown eyes, their gentle nature, and their rich, high-quality milk. But Cindy just knows them by name: Emily (“She’s a sweet girl,” Cindy says), Videri (after the state motto), Peanut and Pistachio (you can guess the theme).

Cindy and her three sons, Brandon, Adam, and Chase, started Carolina Farmhouse Dairy in the northern Durham County community of Bahama in 2016. Their signature product: yogurt.

Nearly 10 years ago, the Hamricks began growing fruits and vegetables at their home in Lancaster County, South Carolina. After holding down a career in engineering and corporate technology, traveling across the country and not getting to see her boys as often as she would have liked, Cindy yearned to connect with the land — and to reconnect with her sons.

Inspired by the writings of Michael Pollan, an author of best-selling books on food and agriculture, she decided to become a farmer. Cindy believes we all have a craving — even if it’s subtle or dormant — to know exactly where our food comes from and how it arrives at our table. She laments the disconnect between modern Americans and the source of our sustenance. “Once you get a glimpse of it, it draws you in so hard,” she says. “If you’re really crazy like us, you just have to go and grow it yourself.”

Having had success with farming, the Hamricks soon set their sights on an even bigger dream, born largely of their love for cows: a farmstead yogurt business. Cindy began searching for the perfect piece of land for a dairy farm, and found herself drawn to the Triangle area because of its large number of family farms and the community’s enthusiasm for local agriculture. Today, Carolina Farmhouse Dairy sprawls across 15 acres — including pastures, woodlands, and a pond — along Johnson Mill Road. And it’s North Carolina’s first-ever yogurt dairy farm. 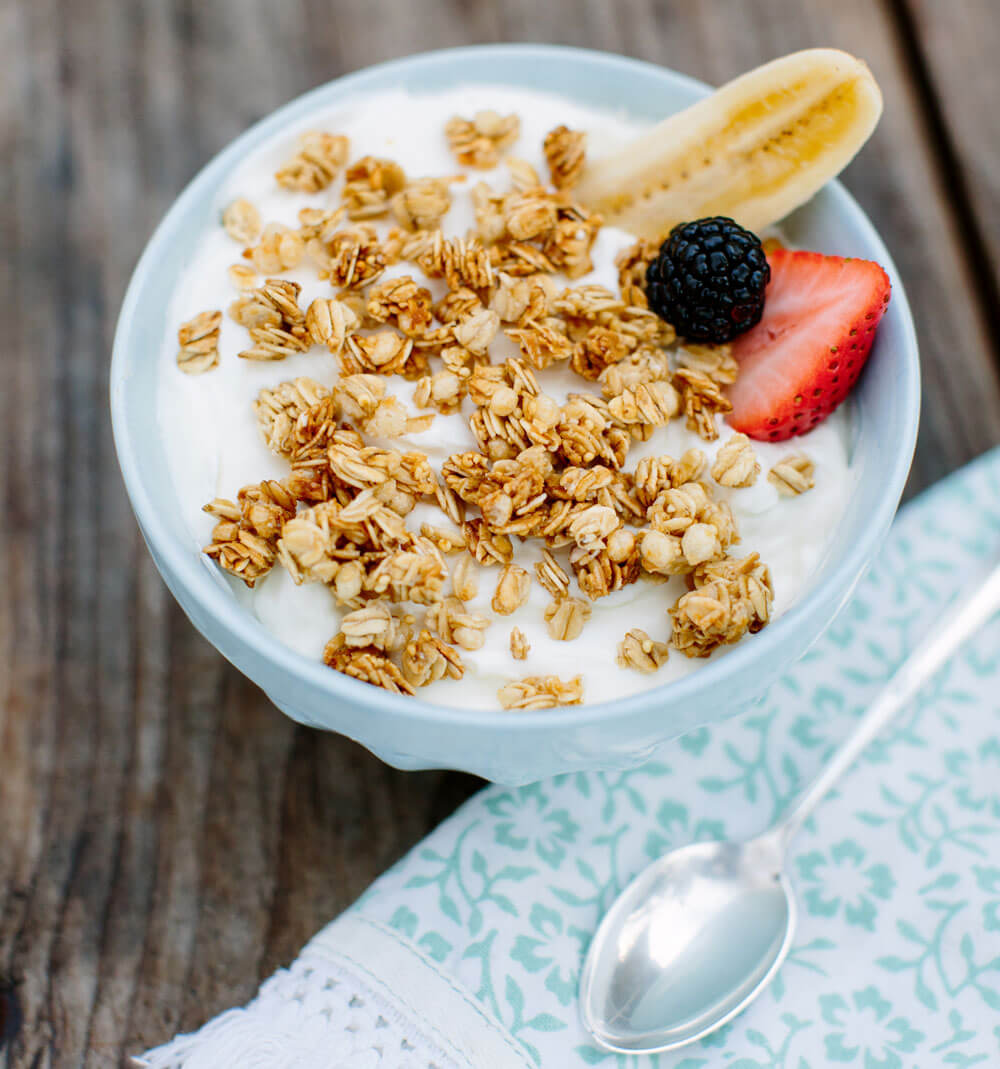 From Bessie to bowl: Fruit and granola are the perfect additions to Carolina Farmhouse Dairy’s freshly made vanilla yogurt. photograph by Anagram Photo

“You have to find a niche,” Cindy says. Sure, there are plenty of dairy farms in the region producing milk, cheese, and ice cream. But nobody else, she says, is churning out yogurt. Filling that niche in the market has enabled her farm to grow faster than she ever could have imagined. In its first 21 months, Carolina Farmhouse Dairy jumped from two cows to 30. Just before the holidays, in late 2017, the farm doubled production.

Out in the old barn that’s been converted into milking stalls and a creamery, you’re likely to find Operations Manager Emily Ingram, one of the farm’s two full-time employees. After college, she set out for Chicago to pursue a different career, only to feel that craving Cindy knows so well.

“I sort of realized along the way that I wanted to work with food,” Emily says. “I want to make food using local ingredients.” Summing up the mission of Carolina Farmhouse Dairy, she says, “We’re making really good stuff, and we’re doing really good stuff for the land.”

And about that good stuff? The dairy makes traditional yogurt in flavors like lemon, strawberry, blueberry, coconut, and vanilla, which can be bought in pints or quarts. They also make smoothies and kefir, a fermented milk drink that comes in flavors like strawberry, blueberry, and lemon. One of their top products, the immune-boosting “golden milk” kefir, is made with ginger, turmeric root, cinnamon, black pepper, and coconut milk. You can find the products at the farm itself or at Weaver Street Market, a community-owned grocery with stores in Chapel Hill, Carrboro, and Hillsborough.

“Mom, what are you doing?” Brandon asks as Cindy walks past a gate and into the cow pasture. “I’ll help you finish the hay off,” she offers. “I can get it,” he says, a little exasperated. “I know,” she replies, then murmurs, “Mr. Independent.”

These days, as the farm and the herd continue to grow, Cindy mostly works alongside her oldest son, 28-year-old Brandon. They push and pull at each other, complete each other’s sentences, and agree to disagree — and they wouldn’t have it any other way.

Sitting for a spell on the trailer railing, watching the cows munching in the pasture, Brandon takes stock of the life he’s chosen. “It’s the hardest thing I’ve ever done,” he says. “But it’s definitely satisfying on a deeper level.”

It touches something deep in Cindy, too: “The boys’ growing dedication and respect for what we do is probably the single biggest and most lasting reward I have ever gotten from this journey.”

Despite the challenges, the cows are happy and the harvest is sweet, and at the end of the day, the Hamricks are in this together. For the love of each other, and of the land.