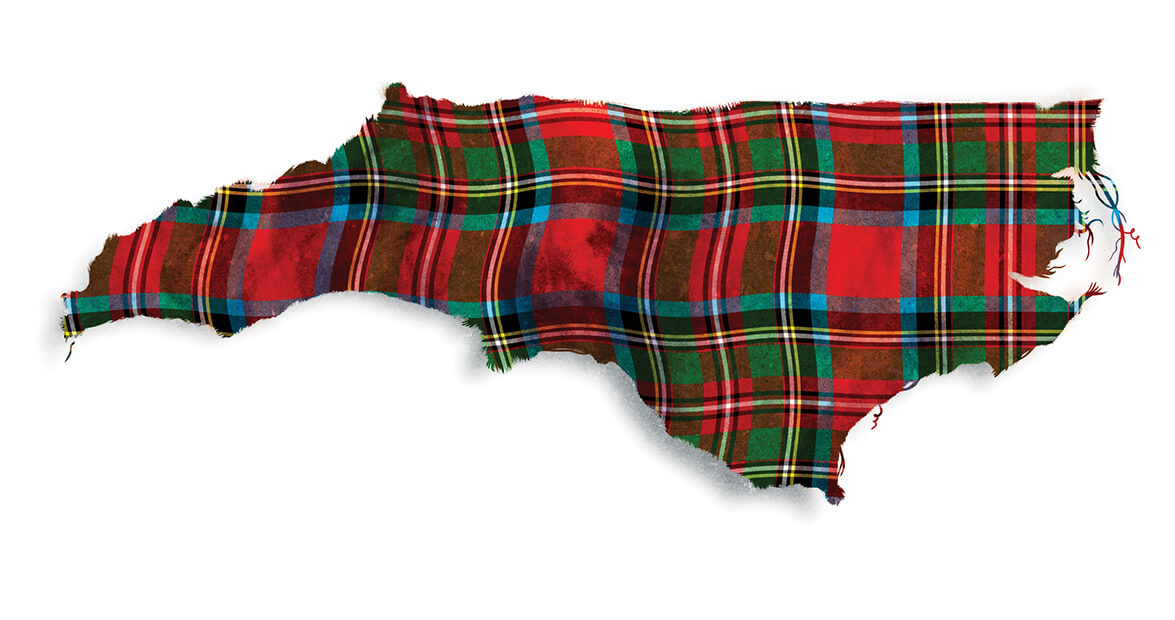 In the third century A.D., a native of Scotland stashed 2,000 silver coins in an earthenware pot, burying it deep in a pit near the ancient burgh of Falkirk. Knowledge of its existence apparently died with the owner. We can only imagine what kind of crisis would have driven that Iron Age dweller to hide such wealth. When the treasure trove was uncovered in 1933, it was the largest hoard of Roman coins found in Scotland. Instead of a stopper, a wad of woven woolen cloth had been stuffed into the neck of the pot to keep the coins safely stowed. The fabric’s pattern was a simple two-toned check, an early form of tartan, dyed in the colors of local plants. This ancient fragment, buried in the very soil of Scotland, reinforces what we already recognize: The warp and weft of tartan cloth has been woven for centuries through the fabric of Scotland’s national story.

By medieval times in Scotland, the term “tartan” was being used to describe woven, rather than knitted, fabrics and garments. (“Plaid,” now used as an interchangeable term with tartan in the U.S., was originally the Scots Gaelic word for a blanket.) By the late 16th century, as weaving techniques developed and plant dye extracts were refined, weavers began to produce their own unique tartan patterns, known as “setts.” Designs then began to take on a regional distinctiveness, determined by the availability of local plant dyes and wool. It was some time, however, before they were associated with any clear-cut clan identity. By the 19th century, as local preferences were refined, different tartans became linked to particular clans and families. Since then, whether or not it parades a connection to Scotland, each tartan is a time-honored badge of belonging to family, locality, teams, events, and even ideas.

Tartan attire was threatened in 1746 under the “Dress Act,” which made the wearing of any “Highland Dress,” including kilts and tartans, illegal in Scotland. Those suspected of supporting the Jacobites were required to swear by oath that they would “never use any tartan, plaid or any part of the Highland garb, and if I do so, may I be cursed in my undertakings, family, and property.”

During these troubled times, many Highlanders relocated to the Cape Fear River Valley, where a large settlement of Gaelic-speaking Scots graced the land of the longleaf pine in the kilts and plaids of their family tartans. From the Lowlands, Ulster Scots settled throughout the Piedmont and Southern Appalachians, and as the “Scots-Irish,” they wove a tartan sett of ballads and fiddle tunes in and among the mountain laurel of their new homeland.

The creation of a special tartan was a natural consequence of the deep and abiding connections shared by Scotland and the Carolinas. For the Carolina tartan sett, designer and weaver Peter MacDonald of Crieff, Scotland, was keen to draw upon history. The Province of Carolina was established in 1663 by a grant from King Charles II. When Charles was crowned King of Scotland at Scone Palace, he is said to have worn a jacket of the Royal Stewart tartan. A pre-1800 fragment of Royal Stewart design thus provided the foundation for MacDonald’s Carolina sett, with added distinctive features in the bands of color. In 1991, the North Carolina Legislature adopted the Carolina tartan, officially shared by South Carolina in legislation passed there in 2002.

All well and good, but beauty is, of course, in the eye of the beholder. For me, in the threads and hues of the Carolina tartan, I see the white of dogwood and trillium, yellow poplar, red maple. In the shades and tones of the warp and weft are green, rolling Piedmont hills, Smoky Mountain ridges, and the crowning blue of a coastal Carolina summer sky. Just like the tartan, it is the braiding and weaving of landscapes, along with European, African, and indigenous American cultural influences, that create the tapestry of the Carolinas. Extract any one of the essential threads, and the pattern and associations will quickly fade. As surely as a glimpse of tartan anywhere in the world connects me instantly to Scotland, the colors of the Carolina tartan transport me to the other place where I feel most at home, and where my heartstrings and your history are interwoven for all time.