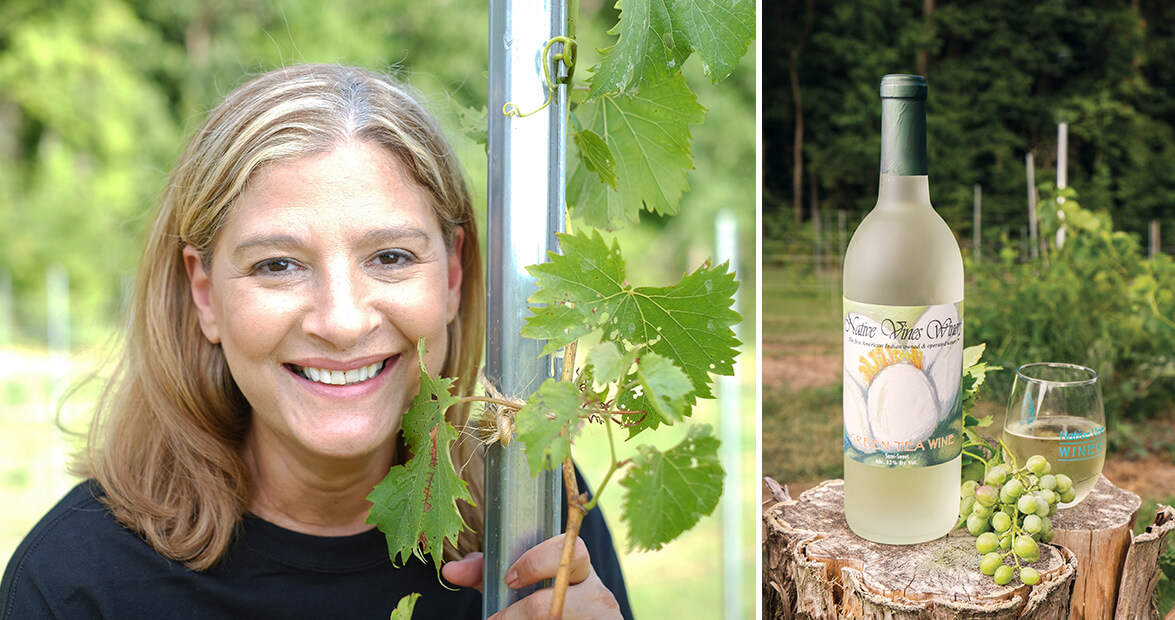 When visitors turn at the arrowhead sign off of NC Highway 150 to visit Native Vines Winery in Lexington, they follow the gravel drive, a dog trailing their car. At the end of the driveway is a house on the right, grapevines ahead, and a tasting room and winery on the left. Visitors might wonder if they’ve arrived at Aunt Ethel’s house rather than the first American Indian-owned and -operated winery in the U.S.

As the dog follows them into the tasting room, converted from a barn, with horses in back, they realize that this is both — it’s a winery, and it’s home.

Owner Darlene Gabbard says that people have wandered onto the 36-acre farm in the middle of a family picnic. It is what it is: a family business that sprouted from Gabbard’s winemaking hobby — and a dream.

Gabbard, a member of the Lumbee Tribe of North Carolina, is understatedly proud of her heritage. Her granddaughter, Madison Tinker, recently danced in her grandmother’s tribal princess regalia in front of her classmates — something Gabbard says she would have never done. But the symbols and the tradition are present at Native Vines.

“People think ‘natural’ and ‘good’ when they think Native American products,” Gabbard says. “It’s just synonymous with the heritage. People automatically know our agricultural history — that we do give back to the earth and only take what we need.”

The philosophy is practiced every day at the winery, where pesticides are never used. “My dogs, my kids, my grandchildren all play in those vineyards,” Gabbard says. “We’re out there picking those blackberries.”

Everyone in Gabbard’s family contributes to the finished product, and helps keep that Native American heritage alive. The wine labels, designed by her daughter, Victoria, feature buffalo, warhorses, hawks, and the Lumbee tribe’s own symbol, modeled after the bottom of a longleaf pine cone. Joining the usual sauvignon blancs and merlots on the winery’s list are Warhorse Red, White Buffalo, and Redhawk.

Gabbard grew up in Greensboro, and her people, the Lumbee, have made a home in Robeson County for centuries.

Yet the winery’s best seller is a meshing of cultures — Japanese and Native American — and it isn’t a blend of grapes, but of tea leaves.

The idea to make a green tea wine came to Gabbard in a dream. “The dream told me what to do,” she says. “When I made it, I looked for what I made in the dream until I finally found what I was looking for. We [Native Americans] believe in our dreams. We do what our dreams tell us to do.”

Gabbard found the perfect blend of leaves for her tea in Japan, where, she says, it’s “so clean — there are no cigarette butts on the sidewalk. The markets get their produce at 6 a.m., and at noon they start marking it down. The food is that fresh. There’s nothing left on the shelf.

“With the Japanese, their culture is so respectful, honest, and dignified. It’s everything [people] think of when they think, ‘Native American.’”

Newcomers may be skeptical about a wine with no grapes, but once they try it, they’re converted. The slightly sweet, almost clear wine pairs perfectly with Lexington barbecue, bringing together native North Carolina flavor with that from Japan. For Gabbard, the idea was intuitive: “The Lumbee tribe is made up of a lot of tribes — there’s Iroquois, there’s a lot of different people,” she says. “We were at the forefront of settlers coming in, so we banded together … There’s a lot of heritage blended to create the Lumbee tribe.”