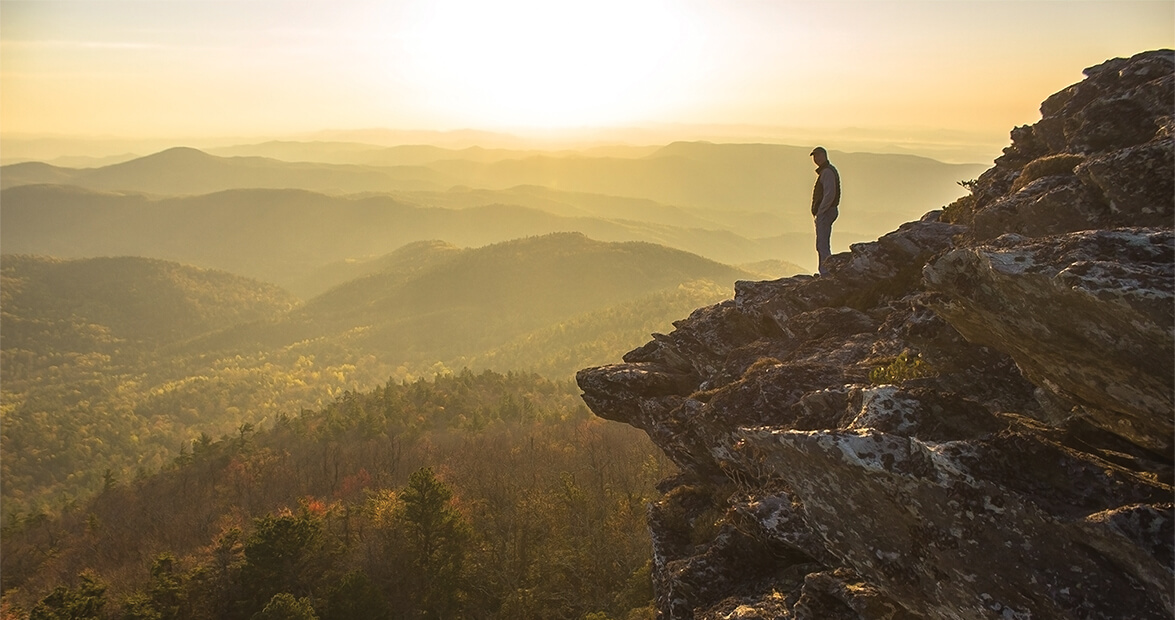 A great vernal curtain draws across the rolling hills, a green horizon that cordons off the Piedmont from the higher wonders farther west. The Foothills unfurl through Wilkes, Caldwell, Burke, and McDowell counties, plunging westward south of Interstate 40, through Cleveland and Rutherford and Polk. The land rises and rises — 1,000 feet, 2,000, 3,000 — a soaring rampart of oak and hickory and beech. A wall of granite and gneiss.

These are the Foothills, a foretaste of the Southern Appalachian chain just beyond. Don’t think that they’re lesser mountains, however, hosting lesser adventures. Climb Buzzard Roost in the South Mountains of Burke County — rugged ridges that once separated Cherokee tribes from Catawba villages — and tell your pounding heart that the Foothills don’t measure up. Stand atop Chimney Rock, the great rock monolith 535 million years old, and tell your soaring spirit that you’re not on top of the world. 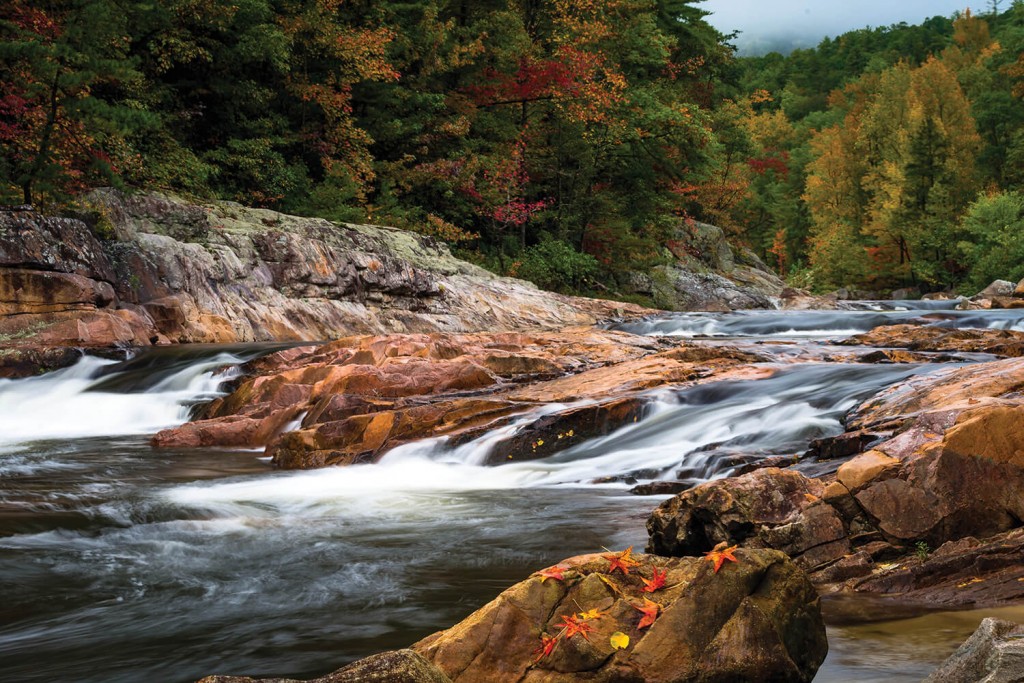 This is Wilson Creek in Morganton. photograph by Tommy White

At Stone Mountain State Park, you can cast a fly along 17 miles of streams — the most easterly cold-water fishing in the state. Along the Yadkin River, a designated canoe trail winds through mountain headwater valleys and pastoral wine country. More than 35 miles of mountain bike trail edge the shoreline of Kerr Scott Reservoir. At Lake James, almost 7,000 acres of water hold some of the largest smallmouth bass in the state.

For solitude seekers, there’s South Mountains State Park. Virtually unknown outside the region, this 19,384-acre park contains miles of hiking, biking, and horse trails. Climb through chestnut oak forests to find 50-mile views of the Piedmont. Hike to the 80-foot-high High Shoals Falls, where the Jacob’s Fork River pours over cracked and folded boulders. You’ll feel it in the rush of falling water: The Foothills of North Carolina aren’t second-class mountains because they’re close at hand. And their adventures aren’t to be overlooked. 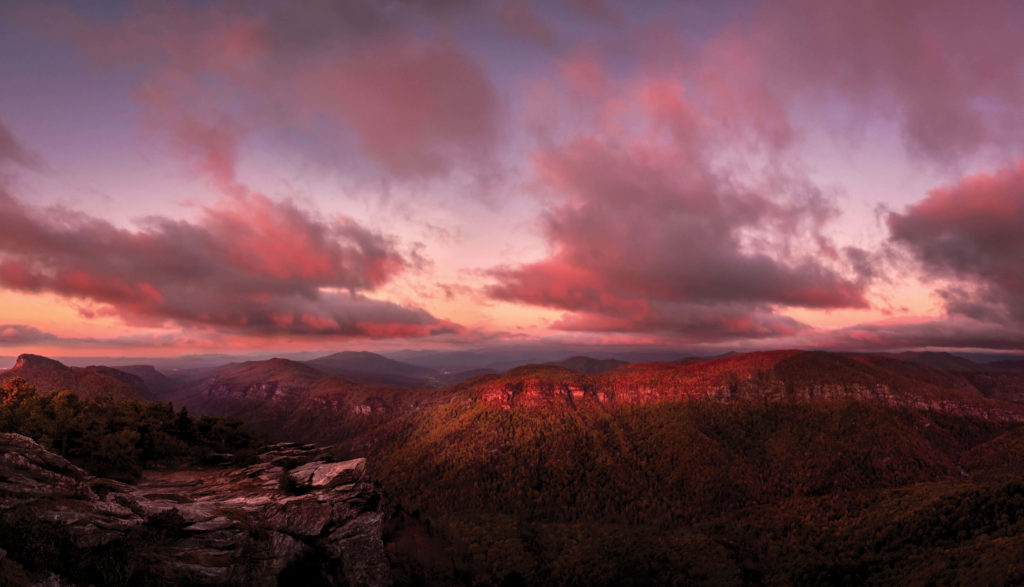 Sometimes called “the Grand Canyon of North Carolina,” Linville Gorge — here, with Hawksbill Mountain — spans more than 10,000 acres of virgin forests; no industrial logging ever took place here. Of the four major gorges in the state, Linville Gorge is the only one without a road in the bottom. photograph by Tommy White

This is where forever lives, where the views never end. In the High Country, you can plant your feet on the highest peaks of eastern America, and plant a paddle in the oldest waters on the continent. You can watch the world turn to flame as the oaks and hickories go gold, orange, fire-cherry red. Or watch a campfire flicker from a valley as dark as it was when these mountains were born. The counties of the High Country — Alleghany, Ashe, Watauga, Avery, Mitchell, Wilkes, and Yancey — are home to many of the most familiar landmarks of the Southern Appalachians, but you could spend a lifetime there and never unravel its secrets. 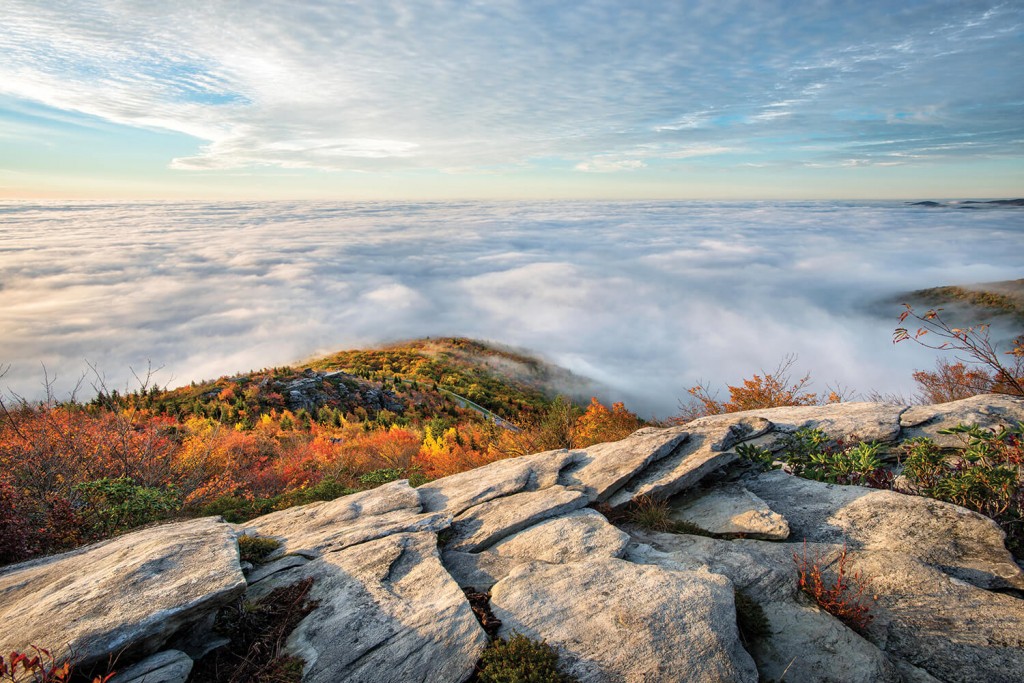 From this vantage point, the Blue Ridge Parkway is a mere thread. photograph by Tommy White

These mountains are unmatched for the ways they can get your heart racing. The peaks of Mitchell and Grandfather host some of the most storied backpacking routes in the country, but you can still walk across the rocky, cliff-edged spine of the Southern Appalachians in just a short stroll from the car. You can paddle the clear, ancient waters of the New River, or cast a line in quiet alpine lake waters, where the only adrenaline rush is when a smallmouth bass slurps in your lure.

That’s the beauty of the High Country: You can choose your adrenaline level. Drop 1,200 feet in a single ski run down Sugar Mountain. Or drop into a rocker. Stroll a wide, historic carriage path at Moses H. Cone Memorial Park, breathing in the sharp tang of the white pines. Or climb Rough Ridge hand over hand, up and across slabs of rock like the bones of an ancient beast, until the world opens up in a sweeping panorama of the Black Mountains.

It’s a great spot to sit and ponder your next day’s adventure. Stalk a native brook trout, the gem of the High Country’s tiny headwater streams? Bag a 6,000-foot peak? Have a picnic lunch under a red oak tree, still hanging on to its scarlet leaves as the last of autumn fades away?

Better get started. After all, you don’t have forever. 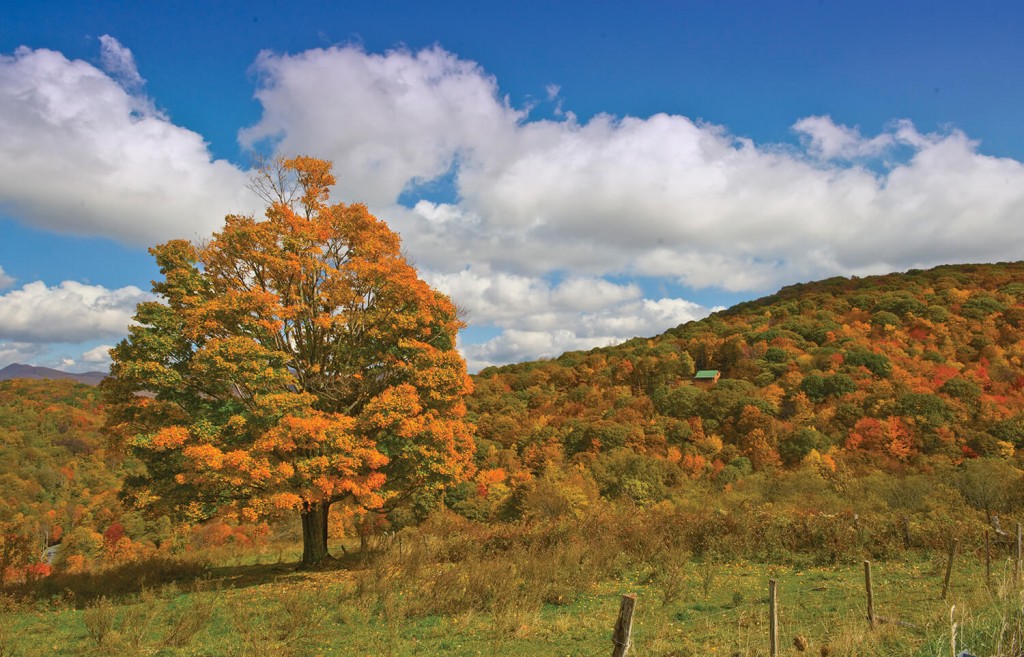 Opened in 2003, Elk Knob State Park is one of North Carolina’s newest state parks, and was created to preserve both Elk Knob, Watauga County’s third-highest peak, and the headwaters of the North Fork of the New River — one of the oldest rivers in the world. photograph by VisitNC.com/Bill Russ

Land of the Sky

Up there, the Great Craggy Mountains soar a mile high, the crenellated, rocky ridgeline of Craggy Dome, Craggy Flats, Craggy Pinnacle, and Bullhead Mountain a roller coaster across the crest of the Swannanoa Rim. This is the Land of the Sky, the great swath of Madison, Buncombe, Henderson, and Transylvania counties. Up there, you can take a big bite of multiday wilderness or nibble on an unforgettable day-hike across the Pisgah National Forest. Up there, Craggy Gardens is a gnome’s wonderland, where foot trails tunnel through rhododendron and mountain laurel. Get there by foot, by bike, or by car along some of the most stunning vistas of the Blue Ridge Parkway. 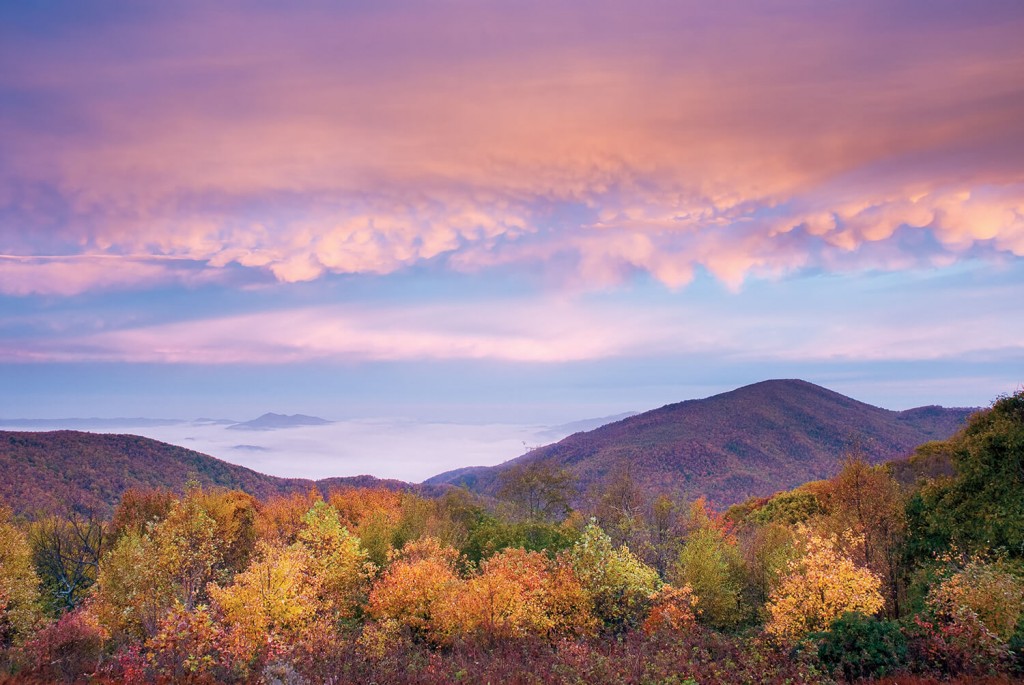 This is Pisgah National Forest in Madison County. photograph by Lori Kincaid

But look down, too, for there’s more to the Land of the Sky than what you find up there. This is also a land of famed waters and historic valleys. Through it all flows one of the storied rivers of the Southern Appalachians. Springing from the Eastern Continental Divide, the French Broad River was here before the mountains were here, before the Appalachians rose, its ancient ancestral stream flowing northwest toward Tennessee. Cast into the Davidson River, perhaps North Carolina’s best-known trout stream. It’s deservedly famous: eight-pound brown trout sip flies smaller than a field pea, so bring your A game. Or bring a camera and tripod to Looking Glass Falls, a 60-foot cascade that just might be the best-known waterfall in the waterfall-rich region. At the Cradle of Forestry, interpretive trails wind through woods filled with the old cabins, schoolhouse, store, and blacksmith shop of the first forestry school in America. 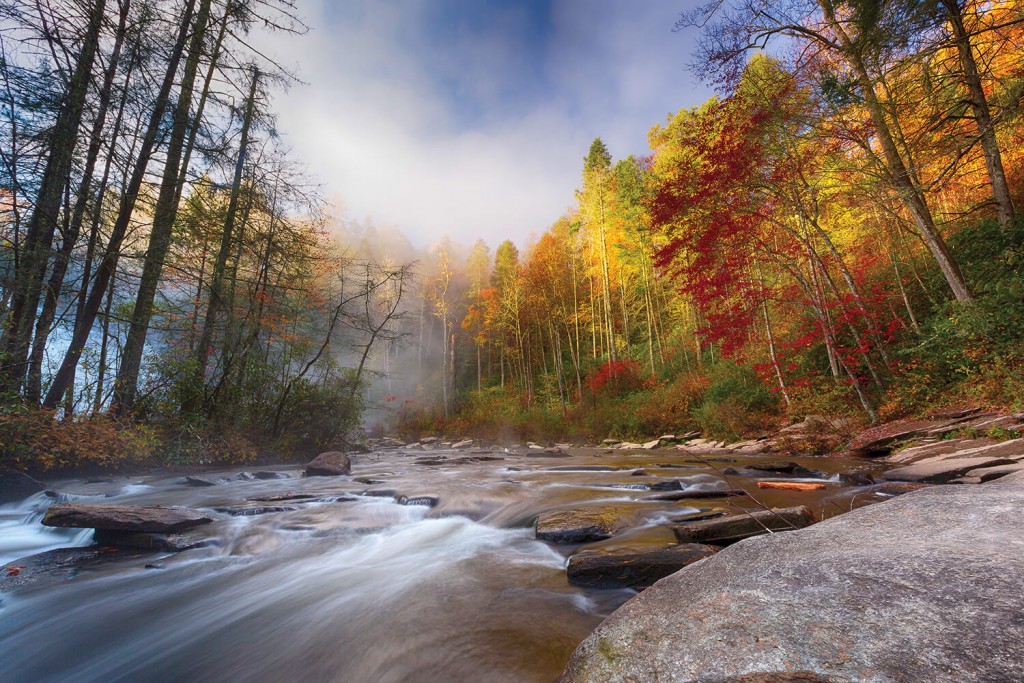 A misty autumn morning at High Falls in Transylvania County, where the Little River nears a 125-foot drop. photograph by dezignhorizon.com/Brendan Arcuri

The Land of the Sky is the land of the Pisgah, national forest land where you can roam between the Blue Ridge and the Great Smoky Mountains. Just watch your head. Up there, it’s all too easy to bump into heaven. 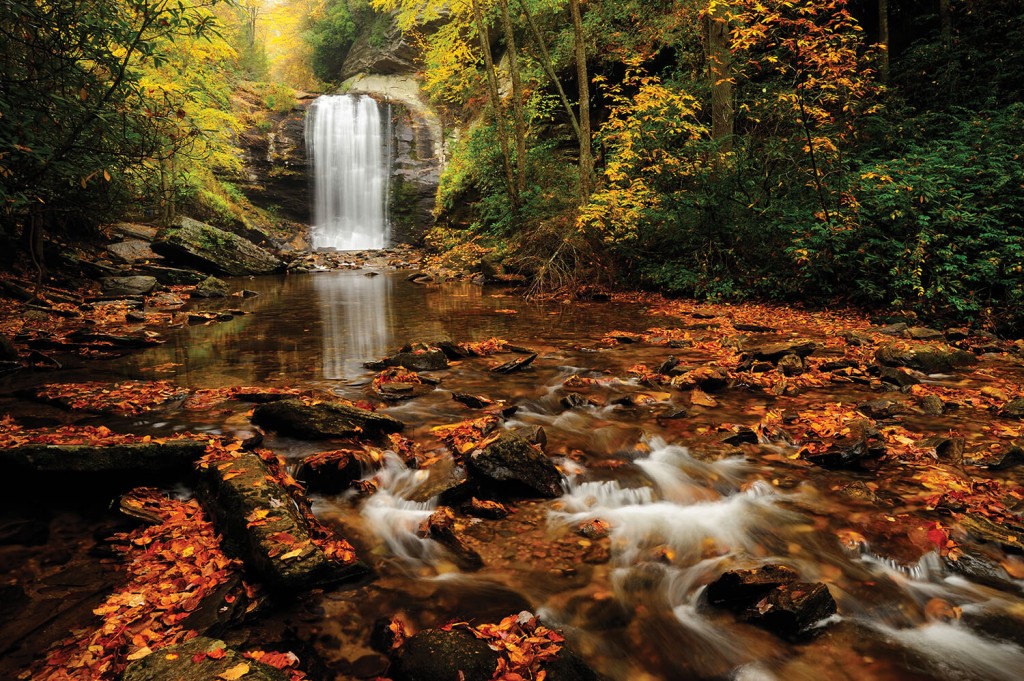 The easily accessible falls are named for Looking Glass Rock, where water freezes in the winter, and then glistens like a mirror in the sunlight. photograph by David Blevins

Long before there was an Appalachian Trail, before mountain bikers and fast-packers climbed these westernmost North Carolina mountains, William Bartram sweated out the big elevations. In 1775, the pioneering naturalist — think Daniel Boone meets a blossom-loving Bear Grylls — rested on a peak near Wayah Bald west of Franklin. He looked over “a sublimely awful scene of power and magnificence, a world of mountains piled upon mountains.” This is the crown of the Appalachian chain, some of the loftiest peaks from Labrador to Georgia.

Bartram plumbed the wilderness along the Little Tennessee River, and the country left a permanent mark on his soul. Plenty of modern-day adventurers would say the same.

There’s seemingly no end to the adrenaline-fueled activities of this most rugged, most removed mountain stretch. Bartram had no choice but to hump it up and over every hill and dale. Today, you can choose your adrenaline level. Redline your adventure, or dial it down. 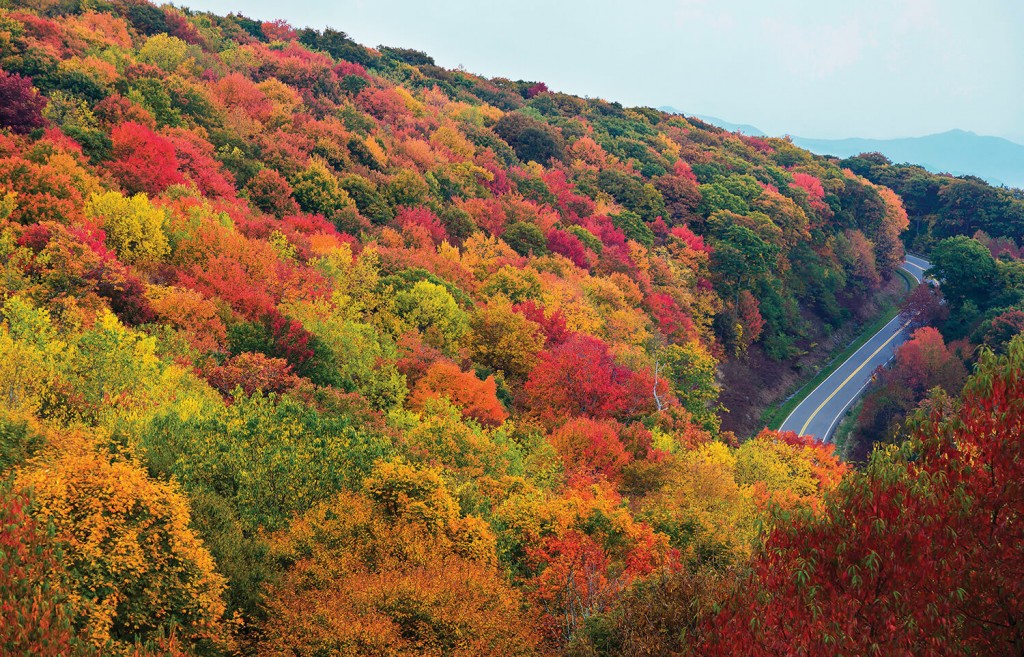 Cherohala (a hybrid of “Cherokee” and “Nantahala”) Skyway covers some 40 miles between North Carolina and Tennessee, and cost more than $100 million to build. The views, some at 5,400 feet above sea level, confirm the maxim that “you get what you pay for.” photograph by Jill Lang

You can hoist a backpack for one of the great cross-country treks of eastern America, the 70-mile backcountry traverse of the great spine of the Great Smoky Mountains National Park. Some 200 miles of the Appalachian Trail pass through this corner of the North Carolina mountains. Or drive some of the most scenic byways on the planet: the Cherohala Skyway. The road to Joyce Kilmer Memorial Forest. Deals Gap.

Sleep under the stars in a tent, under a cabin roof, or in a Mongolian-style yurt. Or you can hook your RV up to water and electricity, and rough it with the nightly news playing softly on the picnic table.

Paddle a kayak on Lake Santeetlah. Or let your captain sweat the details on a Fontana Lake cruise.

It’s hard to say which route Billy Bartram would take, given today’s choices in his beloved Little Tennessee Valley. One thing’s for sure: He’d plan to stay longer than a week.