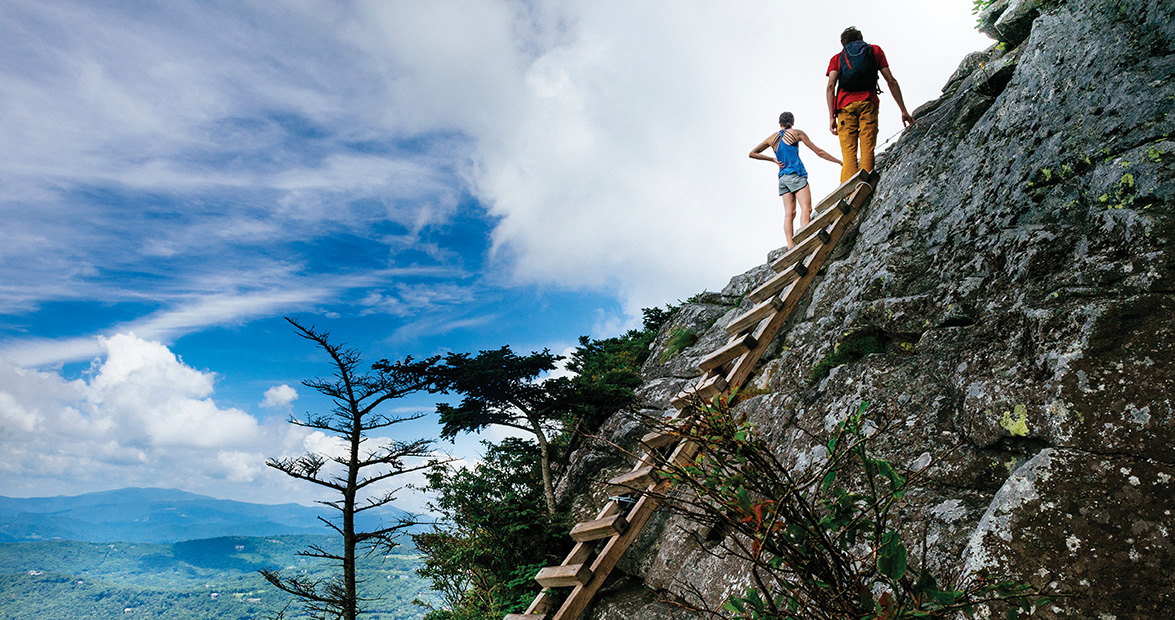 The first indication is the tall, wooden, tricolored warning sign:

THIS TRAIL IS VERY DIFFICULT. (In red.)
BE PREPARED FOR STEEP INCLINES WITH CABLES AND LADDERS SCALING ROCKY CLIFFS.
WEATHER CAN CHANGE WITH LITTLE WARNING CREATING HAZARDOUS CONDITIONS.
THIS TRAIL IS FOR EXPERIENCED HIKERS. (In yellow.)
HIKERS NEED BOOTS WITH GOOD TRACTION. (In white.)

I’m a pretty good hiker. I’ve hiked in the Canadian Rockies and the Swiss Alps and the Tongariro Alpine Crossing in New Zealand. Closer to home, I’ve hiked in Big Sur and Yosemite and Yellowstone and the Tetons, through Acadia in Maine and New Hampshire’s White Mountains — which, by the way, have nothing on North Carolina. Even closer to home, I’ve hiked Mount Rogers in Virginia and Mount Le Conte in Tennessee, and eaten that same meal that hikers who reach the top have eaten for more than 75 years. I’ve hiked North Carolina in ice and snow, and in weather so hot, climbing slopes so steep, that my friends and I took off our clothes, piece by piece, until we were down to our undies.

So that sign. Please. I know all the words to “The Happy Wanderer.”

Still. Why do I feel like Dorothy entering that forest with the evil monkeys and the I’D TURN BACK IF I WERE YOU signs? 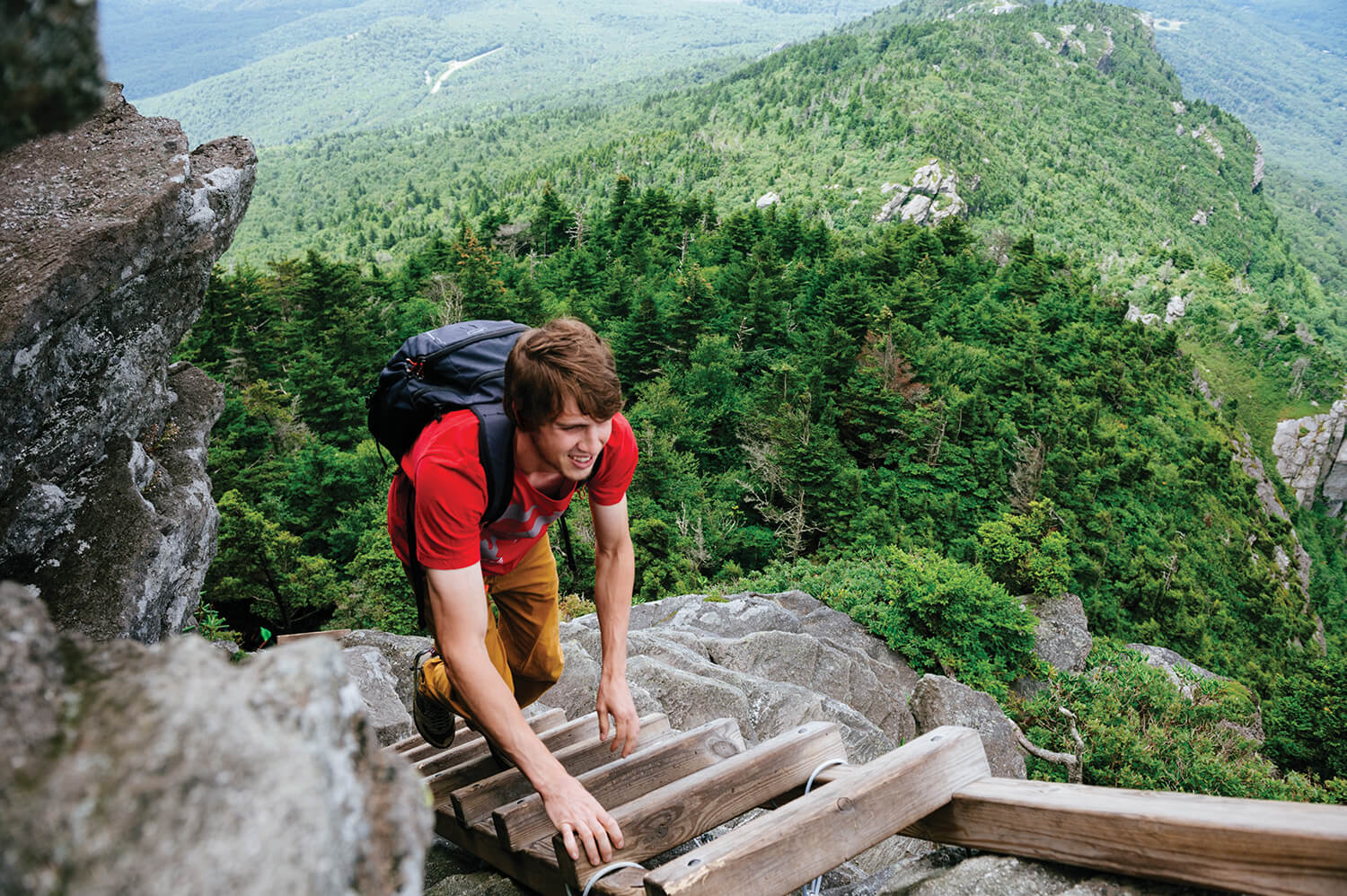 Taylor McNeill of Boone climbs one of 16 ladders on the Grandfather Trail on his way up to MacRae Peak. photograph by Andrew Kornylak

You can reach the Grandfather Trail, a 2.4-mile ridgetop stretch better known as “that one with the ladders and cables” from several trailheads. The easiest, shortest, and most expensive way is to purchase a ticket for Grandfather Mountain and leave from the Top Shop or Hiker’s Parking lots. You can also reach the trail on the east side, from the Boone Fork parking lot and the Daniel Boone Scout Trail, or on the west side via the Profile Trail, just off Route 105 at Banner Elk. (Caveat: the Profile Trail is, in itself, three miles long before you get to the Grandfather Trail, but hey, free means free, not easy.)

The Grandfather Trail, referred to as one of the Crest Trails on the park maps, is among the oldest trails on the mountain. Your goal is Calloway Peak — 5,946 feet in elevation — one of the highest points in the Blue Ridge Mountains. But nobody remembers those stats. What they remember are the 16 ladders, some with only three rungs, and some with 15-and-upward rungs, constructed of thick, four-by-four posts, that you climb to navigate sheer rock faces. Some of the ladders have a nice, normal slant to them. Others are just plain perpendicular. One hiking blog describes the pace as “deliberate.” If deliberate means watching your feet, or someone’s fanny on the rung above you, that’s an accurate adjective.

Like the little girl with the curl in the middle of her forehead, when the trail is good, it’s very, very good. The variety of terrain is astonishing. You travel through a spruce-fir forest, dwarfed and stunted by the wind, around rock walls and outcroppings so massive that imagination fails when you try to envision how they came to rest here several millennia ago. You ease through open meadows with incredible views of mountains unspooling like bolts of faded denim.

But also like the girl with the curl, when the trail is bad, it’s horrid. The trail is marked with blue blazes, which plausibly stand for “hard as blue blazes.” When portions of a trail have their own names, you probably ought to investigate. So it is with “the Chute,” a steep tumble of boulders that requires hand-over-hand and skinned-knee scrambling. “The Chute” might just as well apply to a skinny-minny section between parallel rock faces that you negotiate with the help of steel cables bolted into the boulders. Best not to spend too much time examining those bolts, or the fact that one misstep will send you into the atmosphere. Remember that kindergarten song “We’re Going on a Bear Hunt,” slapping your knees as you mimed swimming and digging? “We can’t go over it. We can’t go under it. We’ve got to go through it!” Yes, that song. Move along. 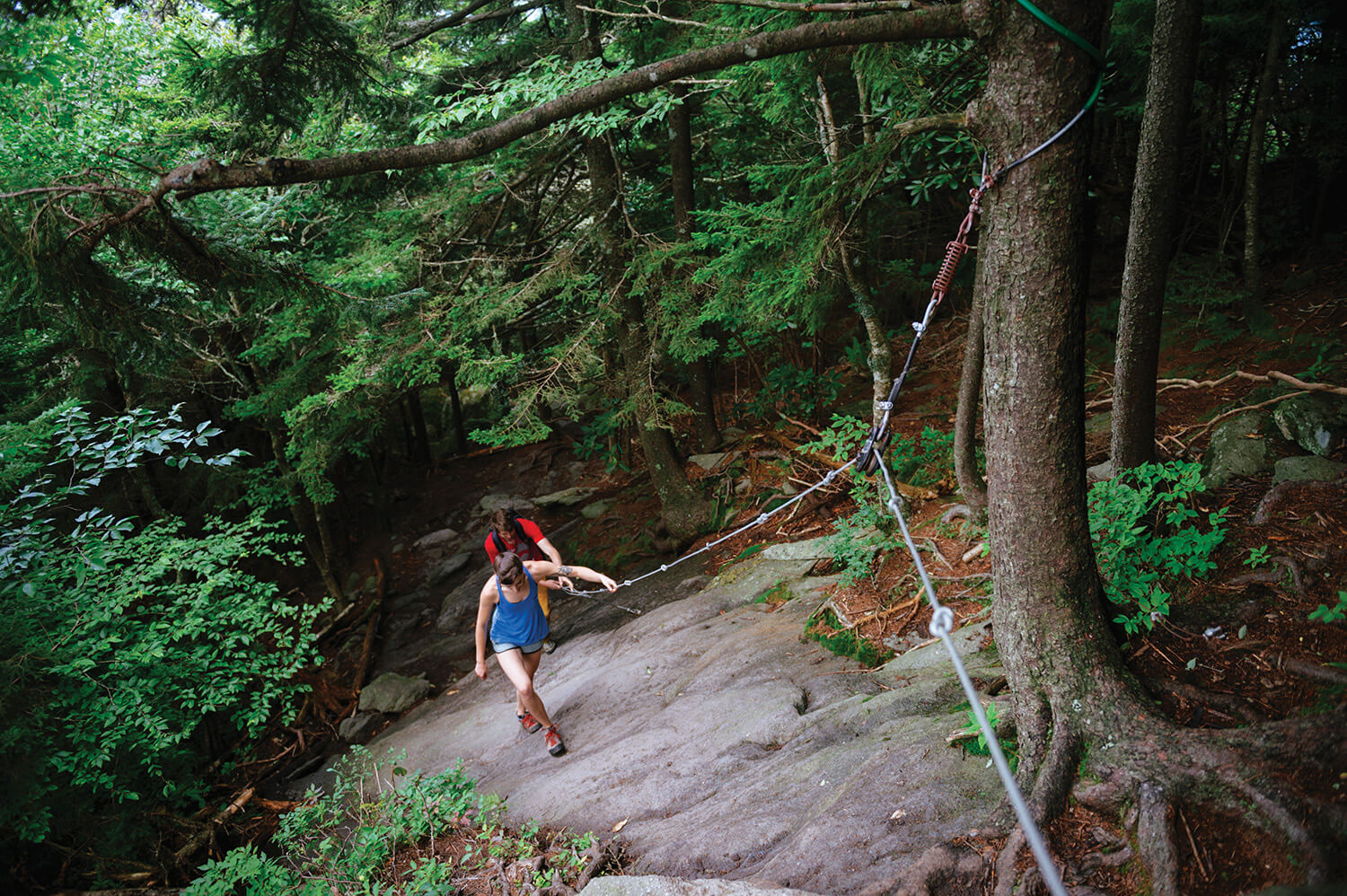 When you look at the slope and think “nope,” time to grab a rope along the lower section of the trail. photograph by Andrew Kornylak

I’ve hiked above the Middle Fork of the Salmon River in Idaho, where a black bear chased me into the 52-degree water, and the person who finally rescued me from the boulder in the middle of the river, with rapids just below, said that the air above my head had turned even bluer than the frigid, rushing water, what with my bear-terror language and all.

But that’s another story, in another state. I’m not worried about bears on the Grandfather Trail.

Instead, I’m worried because as I sit on top of an enormous boulder, which is round, very round, not remotely level or flat, and which I reached by a very tall, 90-degree ladder, nobody’s flying a helicopter overhead to make sure that I’m ok. Nobody’s worried that I’m going to slip off, or sue someone. Isn’t someone supposed to be? I want someone to be my helicopter parent. I’ve always scorned helicopter parents, but I want my mommy. In a helicopter.

The first time I inched over this boulder, I was with a friend who froze with fear. It’s the realization that there’s only one way off, or down: to drop to your belly, inch back along the boulder’s curve, and feel along gingerly with your feet until you find that uppermost ladder rung. If you’re lucky, a friend who’s already on the ground will climb the ladder again and guide your blind feet toward the rung. Let me tell you: Sturdy boots and traction mean nothing on this boulder. It’s not val-dera-ha-ha-ha-ha-ha funny.

And there, finally, is Calloway Peak, the reward for this scant 2.4 miles of sure-footed challenges, never mind risks. If someone hasn’t written an axiom about the grander beauty of something attained by perilous journey, they need to. Because beyond and beyond, in every direction, are mountains and wilderness, forests and crags and ridges, and that incomparable horizon, whose curves and peaks you don’t need to be able to call by name to marvel at and imprint upon your memory. No wonder that, 221 years ago, French explorer and botanist André Michaux is said to have broken into song, believing that he’d arrived at the highest point in North America. More than 100 years ago, naturalist John Muir described the sight as “the face of all Heaven come to earth.”

Except that, excuse me, the wind is whipping. There’s a reason all those spruces and firs are stooped and crouched. You’d best stoop and crouch, too, or be blown off the rocks, because along with vistas come voids.

There’s a kind of smug self-congratulation in rereading the signs at the end of the trail, the descriptions in guidebooks: “Very strenuous”; “Very rough”; “Most difficult.” You parked your dicey balance and acrophobia along with the car; you were courageous, nimble, undaunted. You did it.

I’ve now tackled and conquered the ropes-and-ladders trail, or the chutes-and-ladders trail, or the Grandfather Trail, twice. The experiences were about 20 years apart. This time, the rocks seemed to loom larger, the slopes seemed steeper, the ladders longer, the heights higher. I think twice in a lifetime on this challenging, taunting, sometimes treacherous trail will suffice. Between bears and bad habits and boulders, I’ve shaved enough years off of my life.