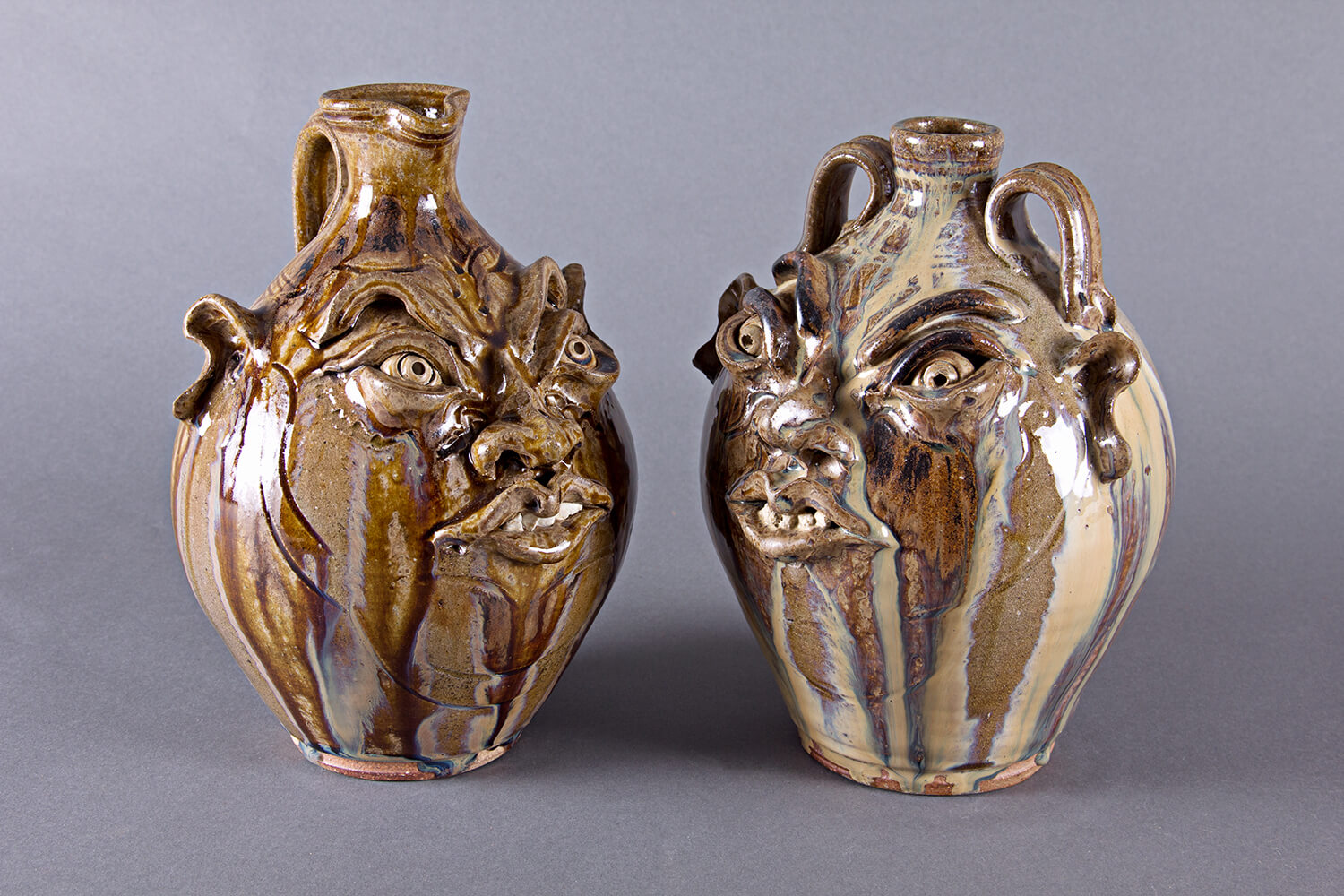 Kim Ellington drinks his coffee from a stoneware pottery mug. It’s greenish-brown and mottled with darker drips and lines.

Despite the mug’s darkness, it catches the light and shines dully, as if through thick glass.

The mug is one of thousands made by Ellington and other prominent Catawba Valley potters, who craft them with variations of that earthy color, smooth feel, and slight shine. The distinctive visual style and the potter’s initials on the base mark these mugs as something more than what they appear — they’re a remembrance of a tradition, a sign of the rebirth, growth, and spread of something once nearly lost.

In the late 18th century, when German settlers from Pennsylvania arrived in the Catawba River Valley — centering themselves in the areas that are today Catawba and Lincoln counties — they found red clay well-suited to the potting tradition of their homeland. For a time, they made earthenware pots covered with a lead-based glaze, but by the 1820s they had advanced their craft, creating more durable wood-fired stoneware from gray Catawba River clay with alkaline glaze. In the kiln, the local materials and the famous glaze combined to form Catawba Valley pottery.

“The clay, the kiln, and the glaze we still use make us one of only three continuously surviving pottery traditions in the whole country,” Ellington says. “There’s us, Seagrove in the Piedmont, and then the Native Americans in Arizona.”

Early Catawba Valley stoneware was mostly utilitarian jars and churns, but potters like Daniel Seagle proved it could be more. They created huge, gracefully curving pots spotted with dark explosions of ash, streaks of oxidized metal, and pale drips of melted glass. But even this beauty could not save the tradition from the changes brought by electric refrigeration and inexpensive glass containers.

Many utilitarian potters left the business, and the number of Catawba Valley potters dwindled. After World War II, demand disappeared. There were no potters left. Then, Burlon Craig, who had been a potter’s assistant in the 1930s and 1940s, bought an old kiln. “And if it hadn’t been for him,” Ellington says, “it’d all be history.” 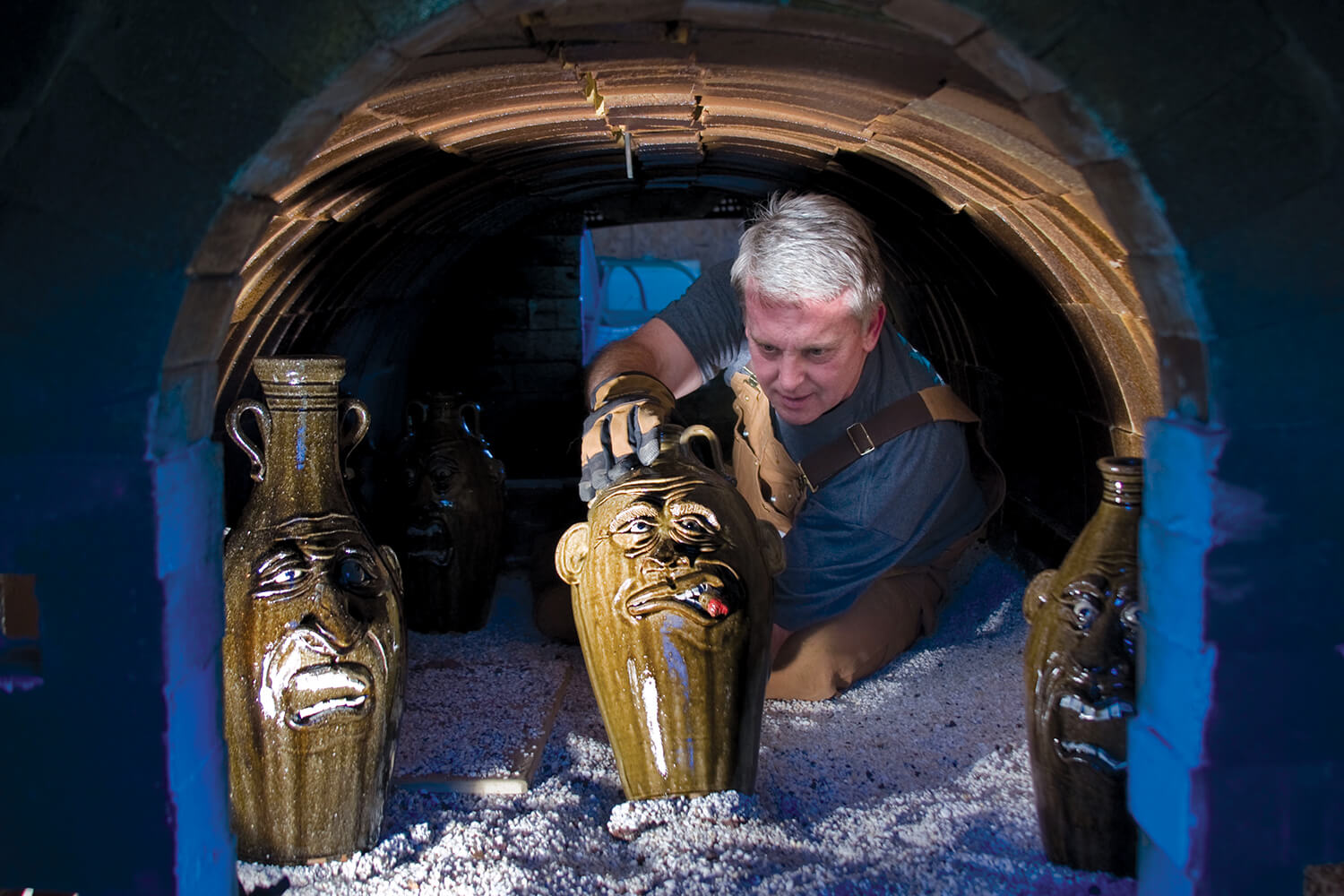 Potter Jeff Young retrieves finished pieces from his kiln in Vale, where he crafts jug faces. photograph by Dawn Crouse

For more than 20 years, Craig was the only working potter in the Catawba Valley, the sole representative of the tradition, crafting utilitarian pieces and experimenting with artistic work like face jugs and pots with snakes around the handles. As word of his art spread in the early 1980s, other potters sought him out. Kim Ellington was one of the first.

Ellington had heard of Craig, so he went to see him. Craig didn’t mind Ellington watching him turn pots, and he didn’t mind having help loading the kiln. He taught Ellington the essentials of Catawba Valley pottery, especially the glaze. Without him, rediscovering the style would have been much more difficult. “But Craig always said, ‘I’ll help you whatever way I can,’ ” Ellington says.

A shed behind Ellington’s house is filled with pots of various glaze colors, imprinted patterns, streaks of dark iron, and shades of blue from stained glass. He’s taken the Catawba style and made it his own. “It’s not just about preserving a tradition,” he says. “For one to survive, it has to be updated to stay relevant.” His pieces are recognizable as Catawba Valley pottery, but they’re Kim Ellington pots, too, all part of a tradition that continues not only to endure but to prosper.

And if Ellington has his way, it always will. “I just want people here to know they have something to be proud of. People the world over know Catawba Valley pottery. It’s something that’s uniquely ours, and it’s the one thing we have that we can put up against anything else, anywhere on the planet.”