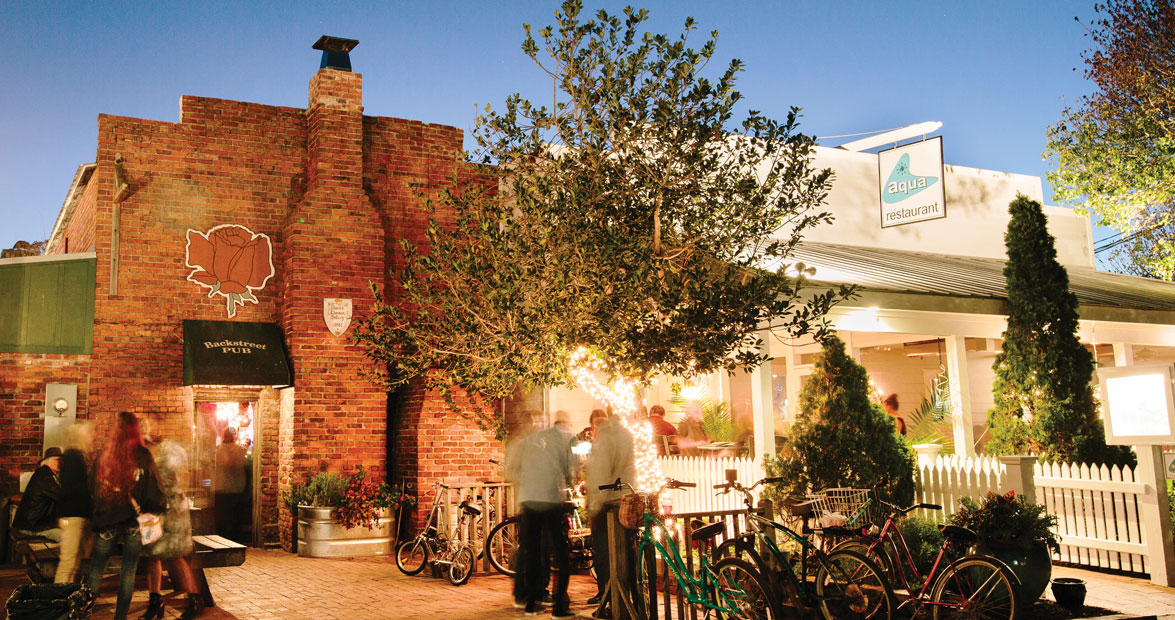 “What’s it like here in Beaufort in the dead of winter?” I asked Jimm Prest, the late innkeeper of the Langdon House Bed & Breakfast, the week of Thanksgiving long ago. At that moment, I had spent but one night in the town that has now, for more than 30 years, been a second home to my family and me. “I can tell you in a few words,” Jimm replied. “Friends and the wind, just friends and the wind.”

How often since then have I felt winter’s power here, felt winds shift big and fast, heard the very cedars of this place shake and shiver, and thought of Jimm and his clear, prescient words.

Beaufort’s streets, lined with cedar, sycamore, and live oak, receive a range of weather so forceful and changeable that the elements can seem almost spiteful on a winter’s day. A sidewise nor’easter’s howling rains and mists will send townsfolk and visitors alike streaming inside for protection of an evening, seeking an atmosphere of congeniality as vividly warm as the outside is nasty and raw.

Middle Lane is one of the shortest streets in Beaufort, some 100 yards long and even less than that from the Front Street docks on Taylor’s Creek. Yet, in darkest winter, no place in this old port town is as lively and important a refuge and source of social sustenance as this brief street. Here sits a pair of cheek-by-jowl public houses — the funky, dimly lit Backstreet and the bright and airy Aqua — both presenting with little fanfare a rare and easy conviviality. When the stalwart Beaufortian year-rounders — and those who visit them in the midst of undead winter — gather in either of these symbiotic watering holes, they, like the places themselves, are sharing a common wall of warmth.

Backstreet’s home is a small, two-story brick building that, decades ago, served as a bakery for Clawson’s Grocery. The oven on an exterior wall and the fireplace in a corner just inside, where flames are aflicker all winter, attest to this place’s long-running theme. “Your mind would be blown by the amount of firewood I use in a winter!” laughs Liz Kopf, genial owner of The Backstreet Pub for 18 years and counting. She left academia and a career of lobbying and political consulting to turn this small, venerable bar into something more, a warm and embracing de facto community center. Entranced by an Inishmore pub in Ireland’s Aran Islands, where a child spun a top on the floor while his parents had a pint and a peat fire burned, Liz transported its essence to Beaufort.

Beneath a ceiling hung with flags from faraway nations, a pair of long, blond sculls, and faded orange life rings from boats named Kon-Tiki II and Bill of Rights, Liz speaks of the daytime folks who come to play dominoes or Scrabble over a pint or two, then go home. And of those who find their way to Backstreet at night, some staying on rather late: “I made a sticker for them, saying, ‘I Closed The Backstreet Pub.’ But my daytime crowd didn’t take to that, so I made another set for them, saying, ‘I Opened The Backstreet Pub.’”

On Friday evenings during the wintertime (which Liz defines as September through May), a pot simmers near the fire, a free offering for all comers. “I’ve gotten very good at making soup over the years,” she says. Could be Italian black-bean chili or vegetable soup. Regulars Mark and Kathy Schurdevin often make and bring in a chicken and artichoke soup. And on the last Friday of each chilly month, Liz even has a few bushels of oysters roasting, too.

Music has always been a big draw. All manner of bands appear in the beer garden in summer, and during cold weather, upstairs in the long-gone bakery’s flour loft. I recall getting behind the keyboard there one winter’s night, joining the band Unknown Tongues on the song “13 Miles to Merrimon” — written by prized Carteret County singer-songwriter Connie Mason. The Down East band and its audience totally merged that night. Those singing along were no more than three feet away from fiddler-accordionist Bryan Blake and frottoir-bass-playing author Barbara Garrity-Blake. Bands on the way to national recognition test their work and mettle at Backstreet, ensembles such as Bombadil from Durham and Yarn from Brooklyn. 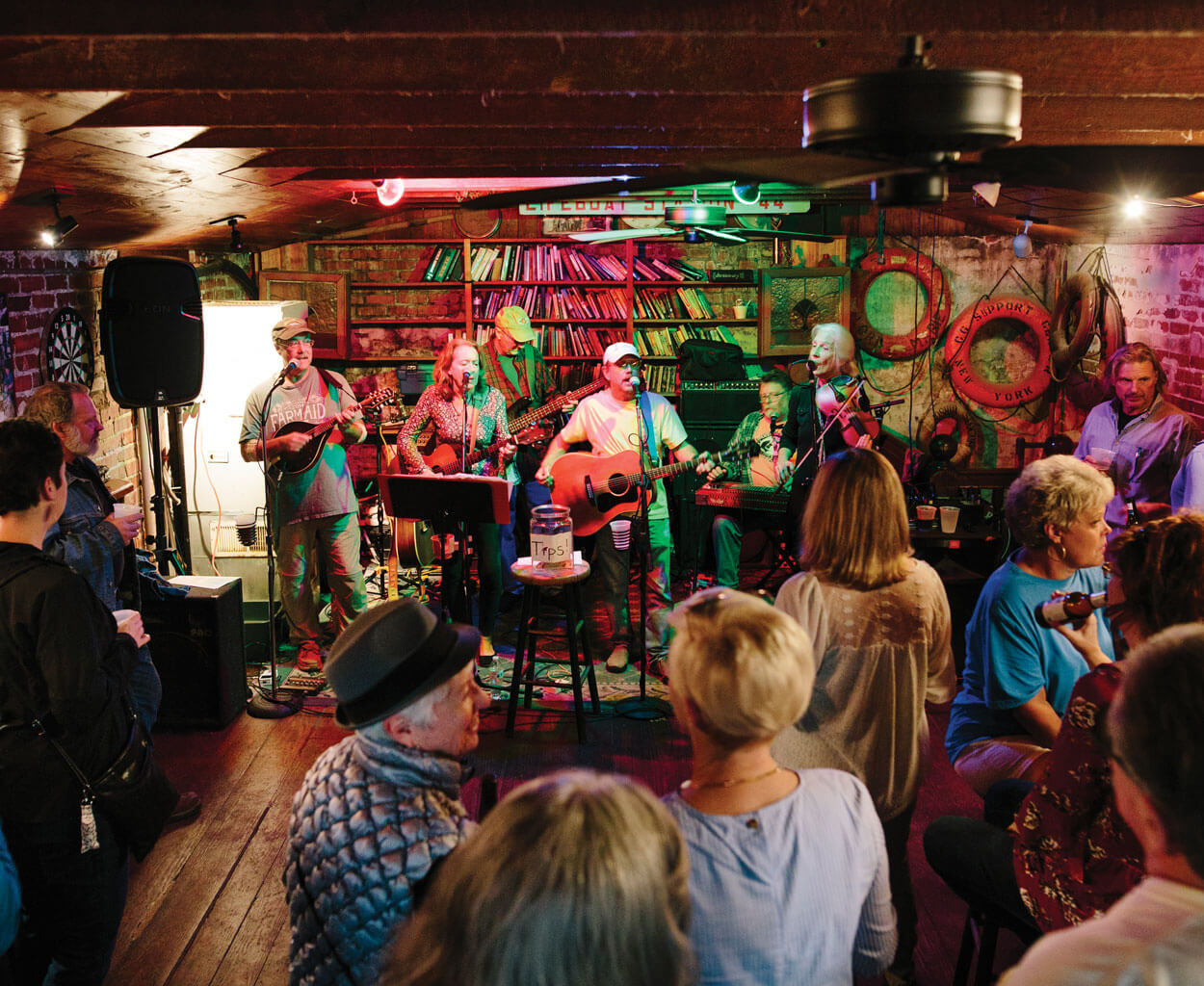 “And did I tell you the place is haunted?” Liz asks, adding yet another point of pride.

“Mister Clawson comes to visit us sometimes,” she says. “The large dial on the stereo moves, the volume goes up. Unusual noises come from upstairs — old boards creaking along the floor of the flour loft …” She raises her gaze mysteriously toward the upper room and lets me imagine the spirit world on the move.

Next door, with its blue-bottle tree, rose bushes out front, and cool-blue vases aglow in every window, Aqua restaurant declares itself to be as idiosyncratically dressy as The Backstreet Pub is casual and funky. Inside, Aqua’s mirrored world is a mélange of blackberry-herb martinis and crème brûlées. There’s catch-of-the-day fish, tomato tarts, shrimp and grits, and craft brews from Kinston, Greensboro, and Asheville. One of Aqua’s founding owners, Fred McCune, has called the spirit of this spot “Dean Martin meets George Jetson.”

The big room’s center section has the feel of a theater-in-the-round, bespeaking its ’90s past when, before Aqua brought tapas and small plates to the Beaufort scene, this was a music venue: Fishtown Alley Performance Hall. Nowadays, a translucent aquamarine painting mounted on the ceiling shines above diners. Dazzling, backlit, and at least eight feet in diameter, the hypnotic work creates an underwater effect. Guests look up, as though gazing toward the water’s surface, as an abstract suggestion of fish swirling in a circle above, wrought upon plexiglass by local artist John Masterson.

Fondly known as Mother Aqua, the stylish and hardly matronly Kim Kromka has managed the bistro for 11 of its 15 years, greeting guests as old friends while instructing her youthful staff like a choreographer. “I’m happy to have that moniker,” Kim says, “because it’s about all the wonderful, invigorating young people who come here to work and who pass through. It’s just a terrific neighborhood that gathers here.”

Most nights, Aqua is socially aswirl, with folks drifting from the short bar and table-hopping, the whole place as informal, spirited, and alive as a New York theater-district bistro. Beaufort shopkeepers gather with teachers and artists, one of whom is among the top photographers in the South. Another is a fine modernist composer, another a celebrated marine-science teacher who was chosen a few years ago to join a National Geographic expedition to Antarctica. Designers and boatbuilders wander in from the Jarrett Bay boatyards, just up the Intracoastal Waterway, to meet up with some of the most widely traveled sailors in the American East. One of them walks through the off-season crowd, asking folks to come see him in St. Thomas and sail the Sir Francis Drake Channel with him and his wife. 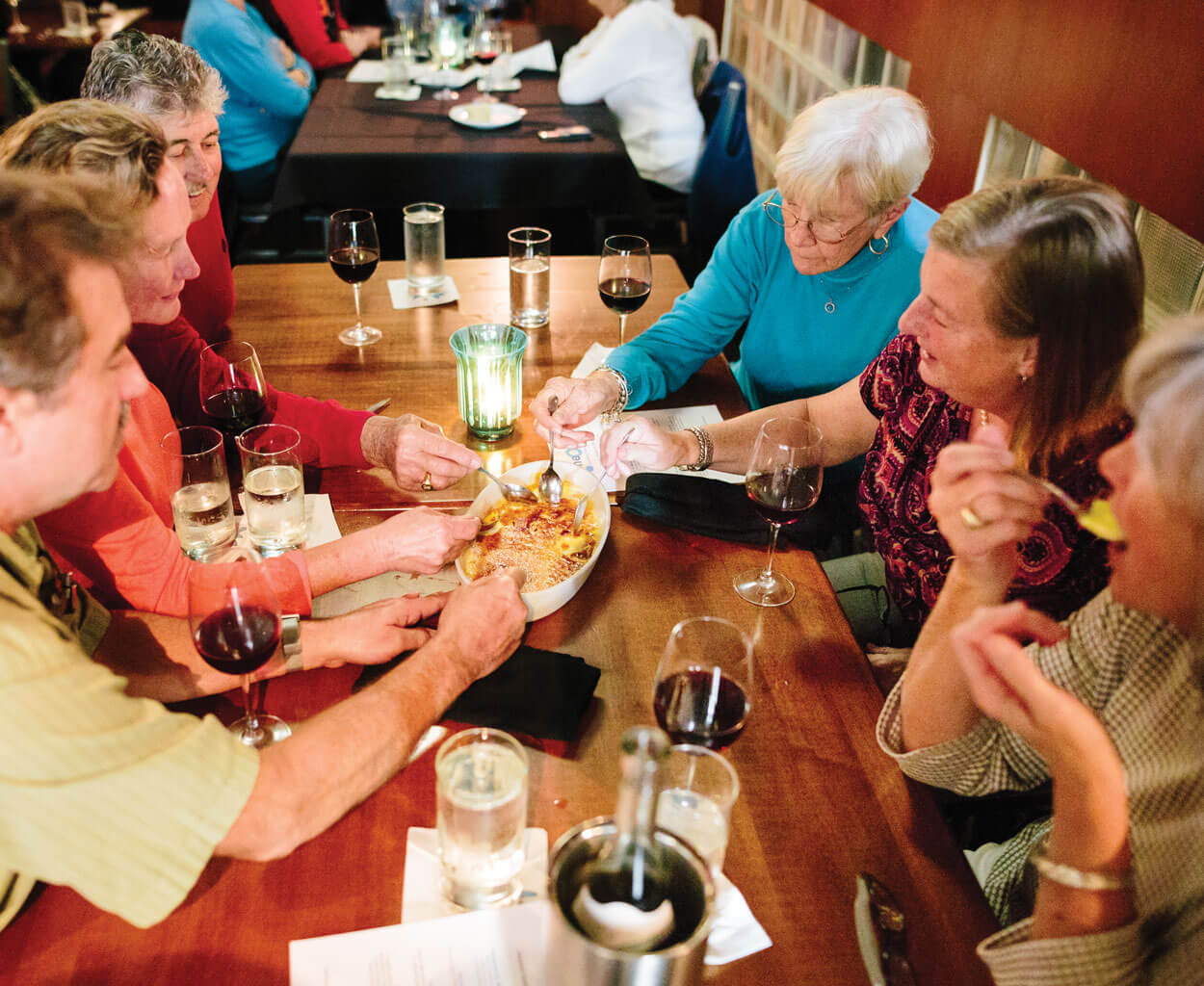 A deep-red wall frames the mirror behind the bar, flanked by Miró and Calder prints. Blue art-glass is all around. Kim stands amid all of this color, watching the creations of veteran chef Jayson Foster go by. “Our fresh catch — grouper, trigger, mahi — is our most popular dish,” she says. “People love our lamb small plate, people love our filet small plate.” And they adore “the bento box, which comes back in the winter.” Aqua’s twice-monthly four-pour wine tastings stay on the restaurant’s calendar through the cold months as well.

Next door, Liz smiles at the notion of folks stopping in at Backstreet for a beer and a few salty oysters before drifting over to Aqua for a meal. Kim feels the same way. “I’ll go fetch people from over at Backstreet when their dinner reservations at Aqua come up,” she says. The cross-pollination between this pair of hangouts has clearly long bemused the two women who keep the heart of Beaufort beating.

The great aviator Beryl Markham once wrote of our deep human need for such gathering places: “A Claridge’s in London or a pub, a Cirro’s in Paris or a bistro — alehouse, coffee-house, bodega, caravansary — by any name each is a sanctuary, a temple for talk, and for the observance of the warming rites of comradeship.”

Aqua and Backstreet, unmatched twins sharing this common wall along Beaufort’s Middle Lane, lean on each other and together bank their coals against the cold of January. Together, they bring friends in from the bitter winter winds that blow off the many waters here, and remind us, one and all, through a kind word, a hearty laugh, a raised glass to better days and absent friends, that yes, indeed, spring will come soon.