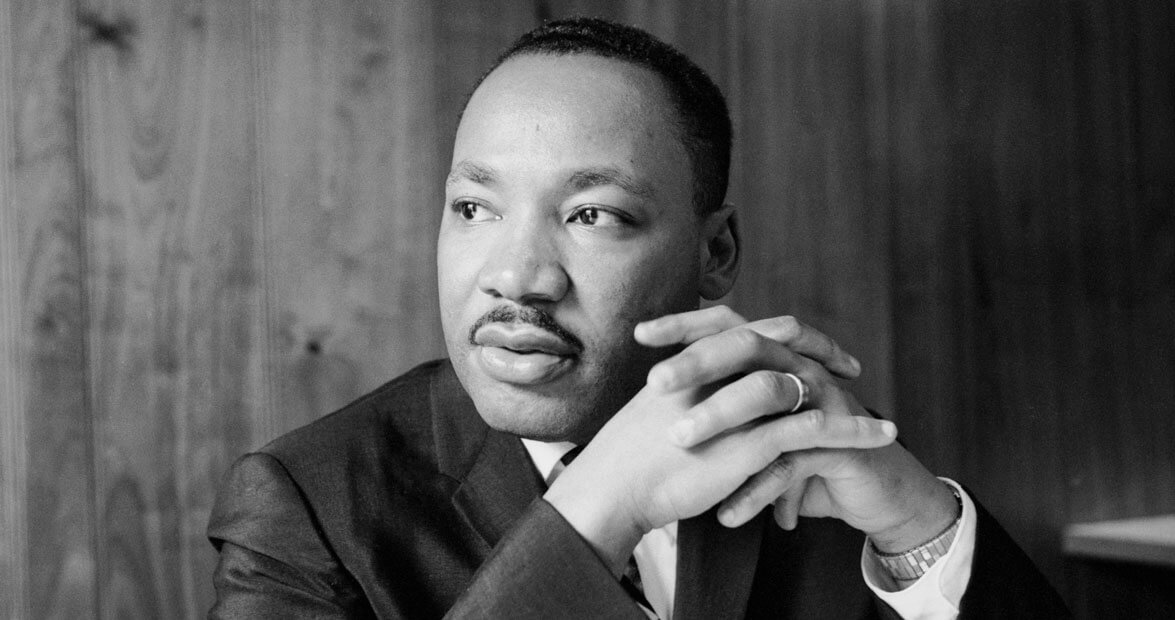 If you wanted to know whether the Rev. Dr. Martin Luther King Jr. said “I have a dream” in a speech well before those words rang out from the steps of the Lincoln Memorial, there has long been a way to find out. The evidence is inside a thin, orange, hardcover book in the stacks of Braswell Memorial Library in Rocky Mount. Few people know about it. Even fewer have ever pulled it off the shelf. It’s more of a scrapbook, really. Inside: Some Rocky Mount Telegram articles. A local pastor’s letter inviting King to town (“Dear Mike,” it begins). A black-and-white picture of King speaking in the gym at the all-black Booker T. Washington High School. A transcript of everything he said to some 1,800 people gathered there on a clear, crisp night in November 1962. That last item, a typewritten readout with handwritten notes, is actually a clue that something else exists. Something bigger.

W. Jason Miller, a professor of English at North Carolina State University, had been researching the influence of the poet Langston Hughes on King. In the fall of 2013, he’d been collecting recordings and transcripts of addresses from across the country when he heard about a transcript of the speech in Rocky Mount. If there was a transcript, he surmised, there had to be audio. He emailed Traci Thompson, a research librarian in Rocky Mount. Yeah, she told him, we have a transcript. And somebody just dropped off a tape, too.

The next day, Miller went to the library.

It took six more weeks of research for Miller to figure out what to do with the 1.5-millimeter acetate that had been sitting in storage for more than 50 years. The plastic on the reel was cracked. The end of the tape was frayed. The thing that saved it, initially, was the inscription penciled on the cardboard box that housed it: “Dr. King’s Speech. Nov 27, 1962. Please do not erase.” The tape had been made by someone sitting in the front row and then stashed away in an attic for 38 years, which helped it survive floods. In 2001, the tape was found, brought into the open, and played. But the audio quality was poor and staticky. Local leaders, with some chagrin, felt that it had lost its value, and they didn’t know who could restore it. So the reel was tucked in a closet at the offices of the local school district, where it remained until someone dropped it off at the library.

Listen to excerpts from the Rocky Mount speech and hear people describe how the address changed their city in this episode of Our State’s podcast, Away Message:

Miller’s research led him to George Blood, one of the nation’s foremost audio restoration experts. Blood said to drop the tape in the mail — but then Miller told him what was on it. Blood asked him to drive it up from North Carolina instead. When Miller arrived in Philadelphia two days later, Blood fed the tape into a machine, adjusted the levels, and pushed play. The audio was still scratchy, but the cadence was familiar, the voice was unmistakable, and the words were almost all discernible. About 51 minutes into the 55-minute speech, King pauses. “And so, my friends of Rocky Mount,” he says, “I have a dream tonight.” 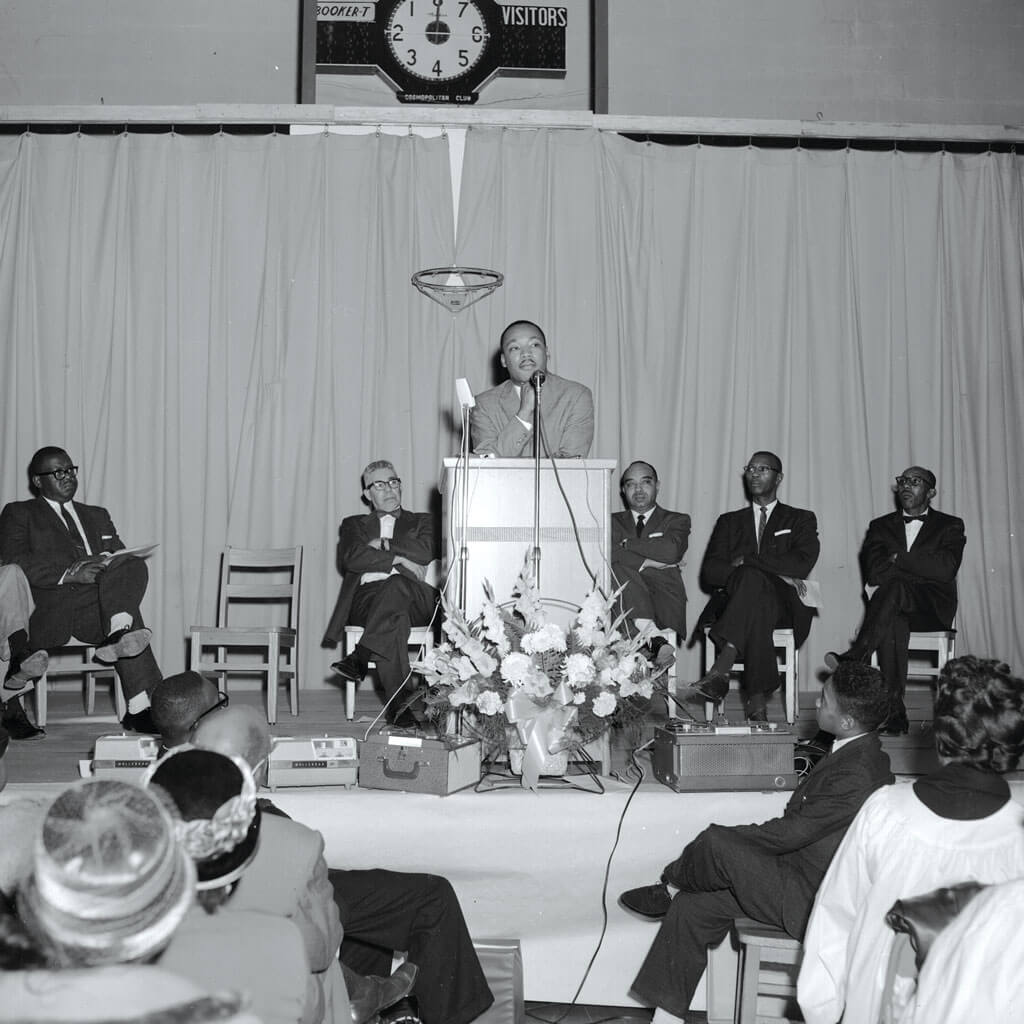 With dignitaries behind him and a crowd of 1,800 before him, King spoke in Rocky Mount in 1962. A recorder preserved his now-legendary words. photograph by J.B. Harren, Courtesy of Andre Knight

In 1962, nobody seemed to remember the part about the dream. “King Presents Case for Nonviolence,” read the headline in the Rocky Mount Telegram. The story didn’t mention the dream. The speech was part sermon, part civil rights address, part pep rally. It was invigorating, but the individual words didn’t linger. “It’s like anything else, you know,” says Herbert Tillman, who saw the speech in person at age 17. “It just kind of fades away.”

The city didn’t change overnight, but the impact was felt. When Booker T. Washington High, home of the Lions, merged with the local white school, home of the Blackbirds, the new, integrated school made its mascot the Gryphon, a mythical creature with a bird’s head and a lion’s body. But that integration didn’t happen until 1969, 15 years after Brown v. Board of Education ordered it. Tillman’s uncle, Rocky Mount’s first black police officer, was once barred from arresting white men. He later earned the rank of captain. Tillman himself was denied a promotion at Burlington Mills in 1966 — it’d cause a race riot, his boss told him. “Well, let’s have the riot,” he remembers thinking. “Don’t hold me back for something I’m not guilty of.” But rather than agree to small, conciliatory gestures, Tillman held out for a bigger change. When a better job opened up at Abbott Laboratories across town, Tillman demanded to be treated equally. Managers agreed. He got the job.

After Rocky Mount, King kept traveling. He went to Edenton, and continued packing venues around the South. And then, in the August 1963 March on Washington, during the final speech from the Lincoln Memorial, King looked up from his prepared notes. “I have a dream,” he began. Tillman was listening on the radio. You know, he thought, I believe we heard some of that. 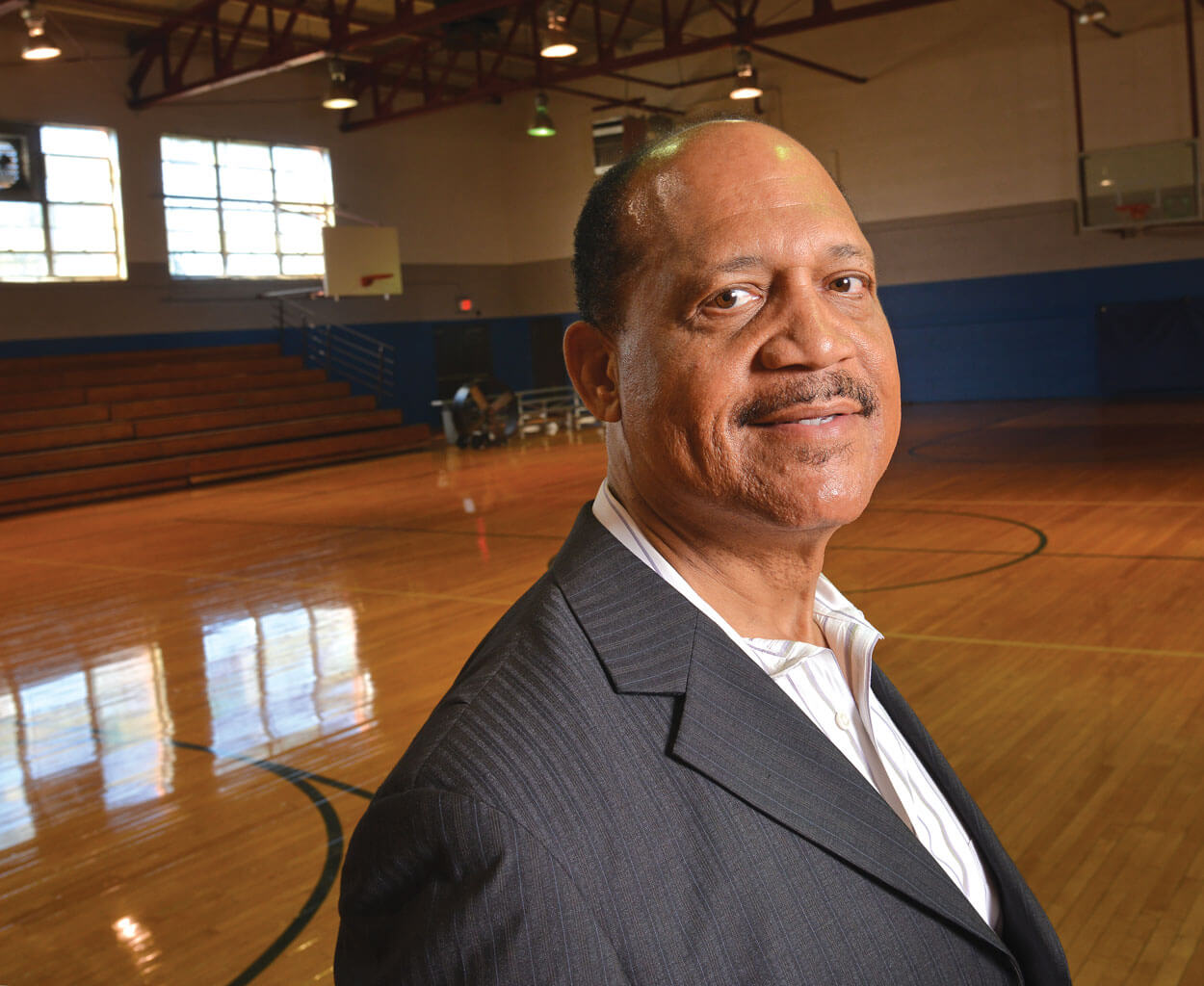 Herbert Tillman remembers the crowd’s reaction when King spoke at the gym: “Everybody just burst out in joy and jubilation.” photograph by roger winstead/nc state university

People in Rocky Mount had been moved by King’s speech, but the rediscovery of the tape allowed for a closer examination of his words, how he said them, and why he chose them. Audio makes that kind of analysis possible, whereas a transcript can only take you so far. “If you’re a sports fan,” Miller says, “it’s the difference between the box score and the game.” Listening to the speech over and over — Miller did so at least 75 times — can connect dots in a way that reading the words cannot.

There’s anecdotal evidence that King first said “I have a dream” in a speech in Albany, Georgia — a week and a half before Rocky Mount. But in Albany, the audience was reportedly tired and didn’t react to the phrase. In Rocky Mount, they did: There’s uproarious applause on the tape as King declares, “I have a dream that one day, we will be free.” The next year, during a speech in Detroit, “I have a dream” connected with the audience again. The phrase became such a strong set piece in King’s speeches that, as he came to the end of his prepared remarks during the March on Washington, the singer Mahalia Jackson cried out, “Tell them about the dream, Martin!”

It’s unclear if King heard her, but, moments later, he put his notes down, looked out at the 250,000 people in front of him, and delivered from memory the most famous portion of his most famous speech.

The words are not exactly the same ones he spoke nine months earlier in Rocky Mount. In that gym, they had more emphasis. More energy. The crowd was closer. On the tape, you can hear King pounding on the podium, his papers rustling. The speech was not a rehearsal for the March on Washington — which wasn’t even being planned yet — but rather a testing ground for what worked. What connected. What called people to action. For that, King turned to poetry. The words “I have a dream” were adapted from Langston Hughes’s poem “I Dream a World,” rearranged for maximum impact, in a way that’s part metaphor, part prophecy, and part poetry.

“Poetry is where memory breathes,” Miller says. “So the unforgettability of that phrase goes back to what he’s taking from Langston Hughes. Without that, we just have words that come to us and leave as soon as they appear. But with metaphor and with poetry, we have something that remains.”

The Phrase remains because, eventually, it became a refrain. When King said “I have a dream” in D.C., it was popular, but it was quickly folded into the larger story of the civil rights struggle and King’s successes (Selma) and failures (Chicago). Before his death, King wondered aloud in speeches whether his dream would ever be realized. It wasn’t until after his assassination in 1968 that people started to reconnect with the phrase, which represented what might have been King’s most idealistic, hopeful, and public moment. After a federal holiday was named for him in 1986, portions of the “I Have a Dream” speech were rebroadcast on television every January, a sort of ritual. The sound, the spirit, and the repetition moved the words from the brain to the heart.

In Rocky Mount, the dream was always there, hidden away on a plastic reel. After the audio was extracted from the magnetic acetate tape, the significance of the tape itself faded into the background. (Miller has preserved it in an undisclosed location.) It’s the message that matters, not the medium. Now, anyone can listen to excerpts of the speech online. But Miller’s students at NC State find it, honestly, a little depressing. Many of the issues that King spoke about, including voting rights and racism, have become the struggles of a new era and another generation.

But in Rocky Mount, the tape has turned “I have a dream” into words that can be felt, connected to, and reckoned with. And so, on a cold February night in 2018, people gathered once again in the gymnasium where King had spoken 56 years earlier. The place has barely changed. A riser stood up front, a black curtain hanging behind it. People shuffled in. Rosa Andrews Brodie took her seat. She, like a handful of others, had been in the gym for the first speech. “The Lord just put me at this place at that time,” she said. 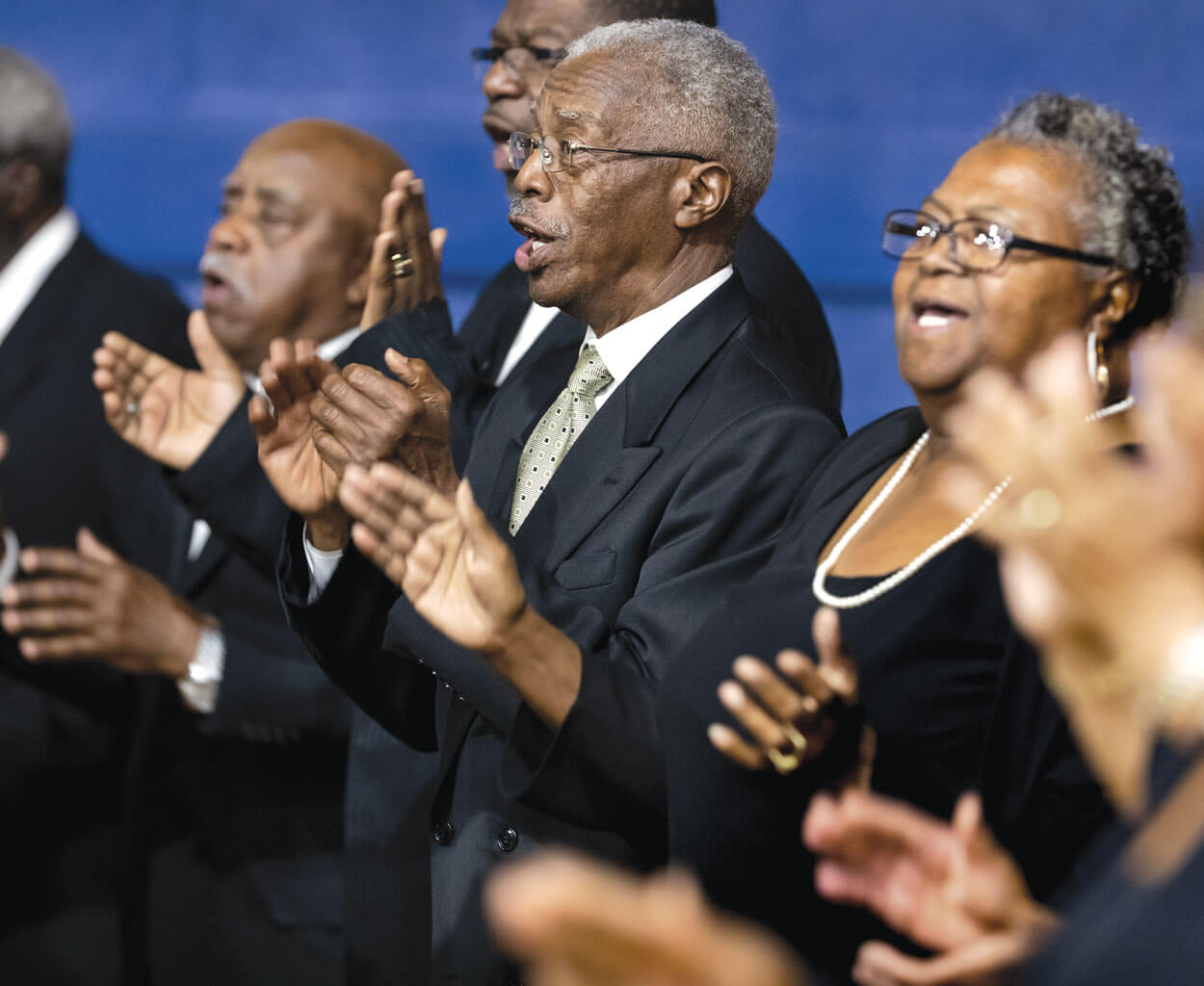 At a reenactment in February 2018, a choir performed some of the songs that were sung during King’s visit 56 years before. photograph by Charles Harris

Several local officials talked about the legacy of King’s visit and the remarkable resurfacing of the tape. Miller gave a hearty thank-you to the people of Rocky Mount and to the film crew that was present to record what happened next: The lights lowered. Someone pushed play. And for the second time, King’s words filled the gymnasium. The audience reacted with joy and laughter, “yeahs,” and applause, just like the first time. And the crowd was brought to its feet by King’s conclusion: “Thank God Almighty, we are free at last.”

That left Herbert Tillman — despite the years, the hindsight, the bad and the good — feeling the same way he had as a teenager in this place decades before. “I love it, I love it, I love it,” he said. “If that doesn’t inspire you, I don’t know what to say.”