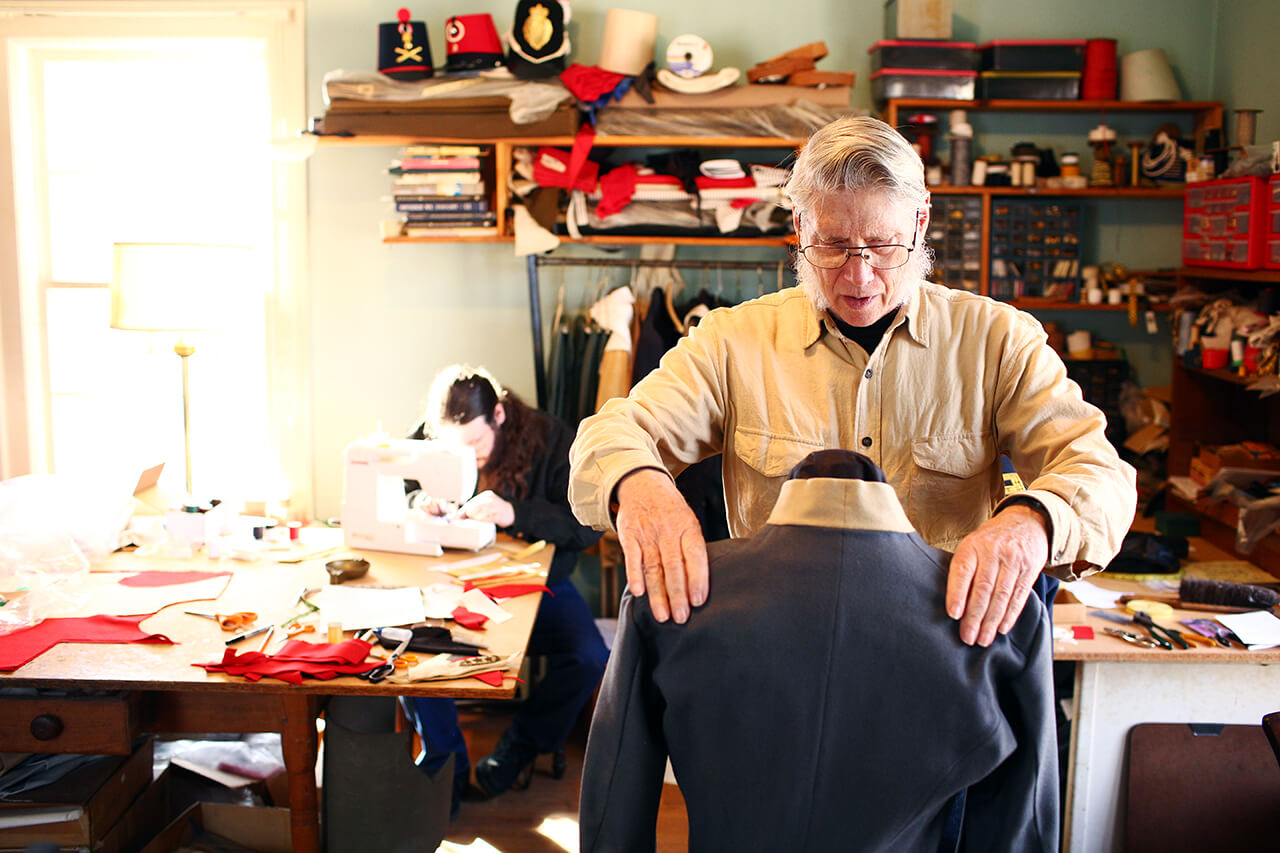 “Here are our Southern boys,” Luther Sowers says, standing inside a cavernous storage room on his property in the rolling hills of Rowan County.

On a rack above him hangs a line of Confederate uniforms that look as if they’ve just time-traveled straight out of the 1860s, though they’re actually the work of his own hands. Every stitch and stripe, every gold-trimmed collar and cuff, every brass button and strip of piping are perfect — and perfectly, historically, accurate.

He moves past Civil War cartridge boxes, caps, and haversacks to another rack filled with the dark blue wool of the Union Army.

“Here we have the Yankee uniforms,” he says, with a wry smile. “We try to keep them separate so they don’t fight at night and keep me awake.”

At 74, Sowers is trim and spry, with an intensity behind his piercing green eyes and graying, lamb-chop beard. He speaks methodically, professorially. Ask a question and you’ll get a story brimming with history. History, after all, is his life’s work.

Few artisans anywhere are still sculpting suits of traditional armor, right down to the handmade rivets. Or forging gleaming replica swords and daggers by hand, right down to the intricate etching. Or reconstructing every detail of military uniforms from the American Revolution, the War of 1812, the French Revolution, World War II, and other conflicts. But Sowers, who is largely self-taught, is surely the only craftsman still doing all those things in this age of mass production.

His work over the decades includes making uniforms and costumes for museums, Hollywood movies, TV miniseries, opera performances, stage plays, and National Park Service productions. His clients have included Colonial Williamsburg and the New York City Opera. He once made a one-of-a-kind Revolutionary War-era sword for President Gerald Ford, and even presented it to the commander in chief when he passed through Greensboro in 1976. His art has been in exhibitions and personal collections all over the United States, Canada, Sweden, Germany, England, France, South Korea, and Australia.

Spend any time with him, and it quickly becomes clear that what matters most to Sowers is his dedication to historical accuracy, even details most people never notice, such as the fabric lining inside a coat, or the leather trim inside a helmet. “I don’t want to tell lies,” he says. “I believe in telling it the way it was, the way it is.”

This obsessive attention to detail, praised by prop makers and museum directors, makes him a unique artist, but a tortured movie watcher. Whether it’s The Patriot, Pearl Harbor, Gettysburg, or countless other war films, Sowers is quick to point out the historical details that the costumers and prop people forgot, overlooked, or simply botched. “The computer now can create anything, but the people guiding the computer don’t really know anything about the period they’re creating,” he says.

For his own projects, Sowers relies mostly on the encyclopedic knowledge he’s accumulated about the accoutrements of war. He also relies on contemporaneous documents and detailed histories to shed light on what life was like in any given era. “The hardest thing for people today is to go back and understand the concept of life in an earlier period without placing it in the terms of their current experience,” he says. “I’ve been able to kind of make that transition backward by reading letters and diaries.”

Yet Sowers is a pacifist at heart, enchanted by the intricacies of weaponry and military uniforms, and has an uncanny ability to recreate them. “What’s my fascination with old wars? They’re over,” he says. “It’s something that’s locked in time.” 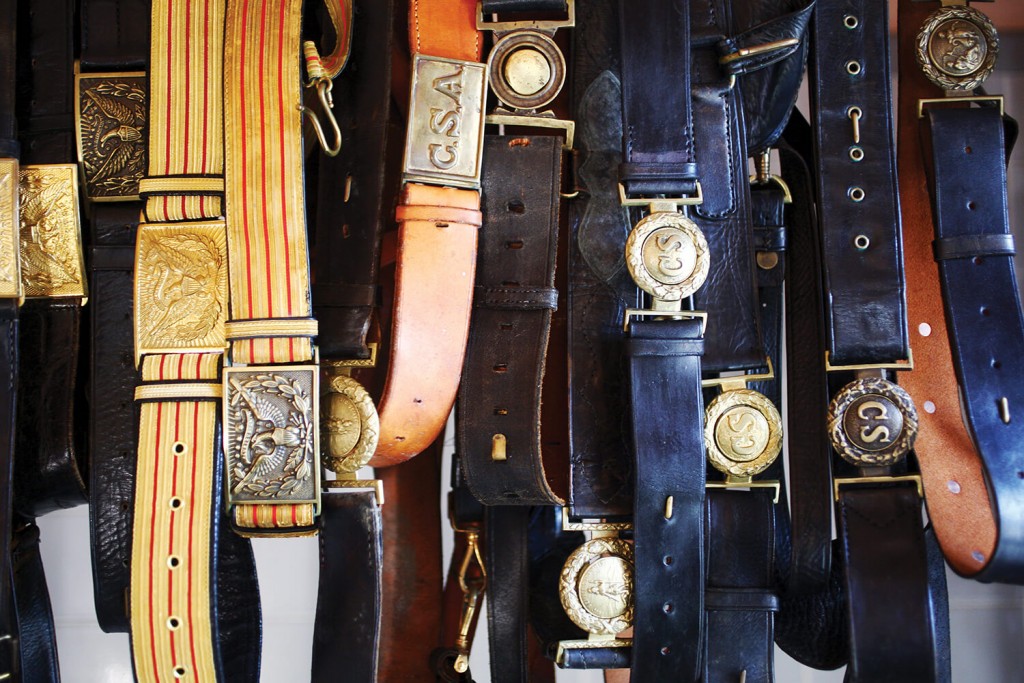 The sprawling farm where Sowers lives and works is virtually the only home he’s ever known. His grandparents lived there. His own parents, a superintendent of mails and a schoolteacher, moved there in 1940, the year Sowers was born. He can still recall the imaginary battles he fought in the nearby woods and fields, and the time he used tin from a chicken house roof to make Roman armor for a high school Latin Club event.

Sowers left to study sculpture at the Tyler School of Art in Philadelphia, where he also worked two days a week at Stokes Kirk, a well-known military surplus store founded not long after the Civil War. “I rarely took any money home; I took bayonets and badges instead,” he recalls.

After college, he spent 11 years teaching art to public school students in Wilson. But he eventually found his way back to Salisbury, where he turned his passion for making historically accurate uniforms, armor, and other weaponry into a business.

Mickey Black has known Sowers since 1961, when various reenactments were being staged to commemorate the Civil War’s centennial. The pair bonded over their love of military history, as well as their frustration over the inaccuracy of many of the uniforms worn by reenactors.

They soon created their own unit — 23rd Regiment North Carolina Troops, known as the Hog Hill Guard — dedicated to making sure every detail was on the mark, down to the socks and shoes.

“We started looking at what [soldiers] really wore and carried,” says Black, himself a prolific collector of Civil War memorabilia who, along with his wife, owns the Salisbury Emporium. “If it wasn’t right, we didn’t do it.”

Kaye Brown Hirst, executive director of the Rowan Museum, marvels at that attention to detail. Over the years, she has relied on Sowers as a “consultant, resource, and dear friend” in putting together war-related exhibits at the museum.

“He’s a Renaissance man; he knows a lot about everything. Luther is a source of endless information for us,” Hirst says.

Dr. Gary Freeze, an author and history professor at Catawba College, says Sowers has “an implicit support group” among a collection of people in the area who share a reverence for local heritage and preservation. “All of us, whether we articulate it or not, we’re trying to keep the past alive,” Freeze says. But Sowers, he adds, “is Zeus, and we’re the lesser mortals.”

“When you look at these costumes and uniforms he makes,” Freeze says, “his craftsmanship is just astonishing. He has this ability to focus on the smallest of details — sometimes to the exasperation of everyone — but the results are always stellar. I’ve never seen Luther do anything that was shabby.”

That extends even to his artwork that has nothing to do with war, Freeze says, such as the massive bronze doors on St. John’s Lutheran Church in Salisbury, which Sowers cast in 1977.

“Luther’s handiwork shows up in more places than most Salisbury folks know. He enriches the community in a way most people do not appreciate,” Freeze says. “He seems like one of the town eccentrics. But you learn — he’s one of the town geniuses.”

On a rainy weekday afternoon, the line stretches out the front door of Hap’s Grill in downtown Salisbury. Inside, amid the sound of shouted lunch orders, Sowers scans the crowd.

“I could pull two columned soldiers out of this room,” he says, nodding toward a pair of men in their 20s. “I’m always casting characters.”

Over hot dogs and Cheerwine, Sowers launches into a monologue about the average size of a Civil War soldier — about 5 feet 8 inches, many of them scrawny, undernourished, and scarcely 130 pounds — and why most authentic uniforms seem so small by today’s standards.

That’s how most conversations with Sowers go. Even in the present, his mind is usually swimming somewhere in the past. Except every so often, when he ponders the future: “Time has always been my worst enemy,” he says, and he means this statement in several different ways.

The first is that he’s a hopeless perfectionist, a patient man in an impatient world. He cares more about getting every detail right than about getting finished, which is terrific for his art, but doesn’t always bode well for his bottom line.

“If one button isn’t perfectly straight on a uniform, I don’t want to send it out. I just don’t believe in adequate,” Sowers says, joking that this habit has led to the unofficial motto for his business: We make everything but profit.

Time also keeps creating new hurdles for his work. Few companies still make the type of woolen goods he needs. Leather makers that once supplied domestic shoe companies have scaled back the types of leather they produce as more and more manufacturing has migrated overseas. The cost of everything — from pewter to clay to copper — has skyrocketed. Sowers lives in perpetual fear that the local welding company will stop carrying the acetylene he relies on for his armor work. In the meantime, he scans army surplus magazines, stockpiling wool, buttons, insignias and other materials whenever he can.

“Creating a dream world is getting harder to do,” he says. “Everything is designed for mass production, mass consumption, and quick turnaround time. Sometimes when you want a leather helmet, the leather is still eating grass out in the pasture.”

And time has begun to encroach on his body in ways it has never threatened his soul. “I have the disadvantage of being a 22-year-old creative mind in a 74-year-old body,” he says. His joints won’t allow him to sew for hours on end, the way they once did. The cold weather slows him down, even when the old woodstove in his workshop is pulsing. The physically demanding work of shaping metal with a hammer and flame is harder than it used to be. He’s made 289 swords and hopes he has at least 300 in him.

And so he’s begun to think about what work matters the most these days.

“In the past, I’ve usually done what other people want me to make,” Sowers says. “I’m beginning to run out of time, and I’m beginning to make things that I want to make.” That includes finishing a handful of Colonial-era and Civil War swords, and building a suit of armor to match a replica of a helmet from the 1550s. He has historical films he wants to produce, including one on the Revolutionary War in Rowan County, and another set during World War II.

So he plods along, steady as always. Sewing the next uniform. Hammering the next piece of armor. Polishing the next blade. Working on the stories he hopes to tell, the art he wants to create, the slices of history he wants to resurrect for as long as time will let him.