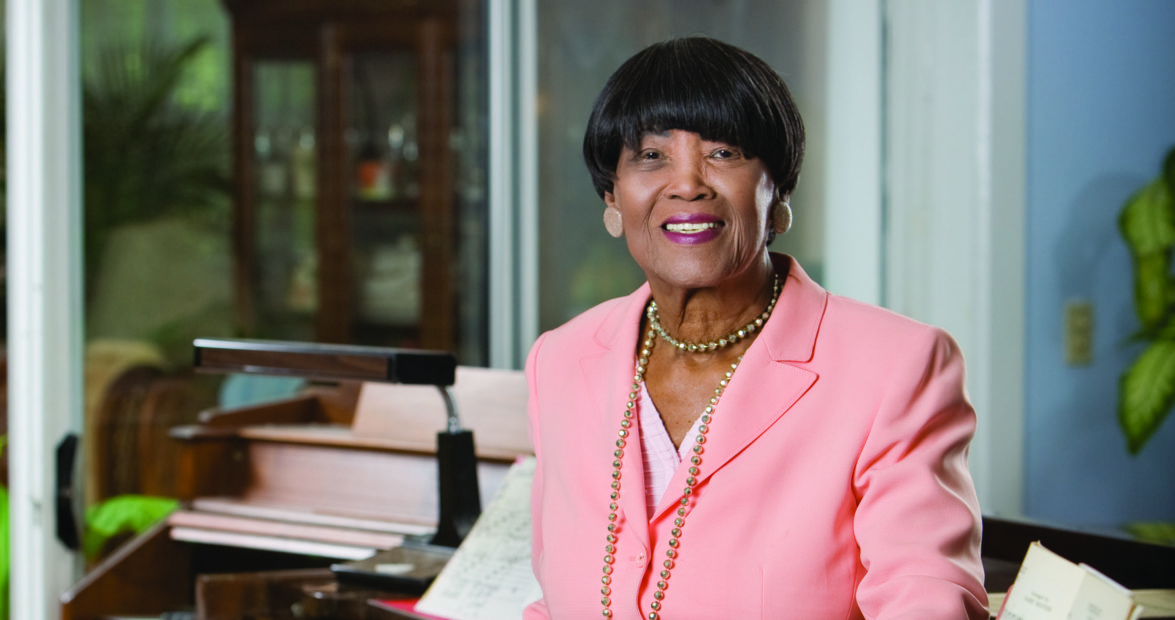 The teacher slides effortlessly onto the bench of her favorite concert grand piano and begins to play. Her students gather around, their ears hooked to the sounds, their eyes glued to the teacher.

Clara Jones has more than seven decades of keystrokes worn into her fingers, but she still glides seamlessly up and down a keyboard.

For today’s demonstration, Jones has chosen Robert Schumann’s “Soaring.” The song is 173 years old; the teacher is 81.

A sight to behold

There is a saying about most jobs, but teaching in particular: You either have it, or you don’t. Some of those who have it, they have it burrowed so deep, it constantly fills their minds, their lives, and their homes.

In order to accommodate her love of teaching piano, Jones and her late husband, Cedric, had to expand their home in west Charlotte six times. That’s because the piano collection kept swelling. They are everywhere: vertical and horizontal, console and studio, baby grand and ballroom grand — 26 in all. On a teaching day, the house is a show of activity, with multiple students honing their skills in different rooms, and their 81-year-old teacher bouncing from one place to the next, carrying on two lifetime passions: teaching and music.

“I like having a lot of rooms because if I’m teaching one child something and if that child has to master it, then I can go to another child and teach that child a skill,” she says. “Then he has time to master that skill. You can practice by yourself. You stay an hour if you know your music. If you don’t know your music, you stay until you learn.”

Patrice Johnson, who studied under Jones in the 1980s, remembers when there were a handful of pianos, and the home was still just a modest ranch in Charlotte’s Lincoln Heights community — before the pianos and the home grew.

“She had three — a grand or baby grand in her living area and two regular pianos right in the middle of the house,” Johnson says. “It was just three. When she got to be Clara, she was well on her way, and everybody started referring their kids, she was doing additions.”

Jones still has the Baldwin piano she took her first lesson on as a 10-year-old, its brown pigment aged and worn by years of play but finely tuned for practice sessions, nonetheless. Two grand pianos — her favorites — dominate the recital hall, along with an electric and a pair of large organs.

Jones was exposed to music early. Her mom was a church pianist. “My mother played piano beautifully; she sang beautifully, too,” Jones says. “Her father was a minister, so she had no choice. She played for church every Sunday. I came up with a lot of music in my home.”

Still, it was her neighbor — a local principal — who convinced her to play, passing down both a foundation for music and educating.

Jones first started teaching in the 1950s with the Charlotte-Mecklenburg Schools. Anyone who wanted to show up for chorus and piano lessons was welcome.

It wasn’t until after retiring from public school teaching that things started to really grow. She began a second career as a private instructor, and word of her abilities spread throughout Charlotte. With every new student, and every new piano, the need for expansion became more pronounced, and the home grew to what it is today — a super-size classroom and studio.

But no matter how big she’s gotten, she’s always managed to handle it with grace and ease.

“If you say children, she lights up,” says Dee Dolby, a retired school administrator who has known Jones nearly 30 years. “When you’re doing what you like as your life’s work, you do what she does, which is reach many youths who’ve needed her guidance and direction. She’s just a dynamic person with a heart of gold who is motivated to do something to help people.”

Nobody mistakes Jones for the easygoing sort, however.

Johnson remembers being afraid of playing before an audience. But Jones would have none of it, and she forced the timid youngster to break out of her shell.

“She pushed when I wasn’t confident in my ability to get in front of people or my musical ability,” Johnson, 38, says. “She would push me into competitions that I thought were far out of my league, but I couldn’t quite see [my ability] at the time. I think that gave me a little more motivation, drive, and push.”

Lechetze Lewis, 18, is currently one of Jones’s best students. Lewis graduated from Myers Park High School in June and earned academic and music scholarships at Converse College in Spartanburg, South Carolina. She credits Jones’s insistence on discipline with helping her in academics and music. No matter how talented the student, Jones is a stickler for detail.

“Her favorite saying is, ‘No excuses,’” Lewis says. “I started here when I was 6, and the first thing I learned was, Miss Jones takes no excuses. I learned to always bring my books from home and always practice, and it helped in my classes at Myers Park. I have to thank Miss Jones for that because I wouldn’t have been able to get my academics straight in order to gain an academic scholarship.

“She has such a reverence for music itself. You’re kind of scared of her a little bit, but you respect her because she adores music.”

After she finishes showcasing her abilities by cruising through Schumann’s “Soaring,” Jones stops and contemplates what still drives her to teach.

She doesn’t need too long to come up with an answer. It’s the satisfaction, she says, of building old-school talent in a world consumed by technology. Kids who can balance video games with Bach are eager for challenges. Jones provides a vehicle to measure their growth through performance.

“Teaching piano today is wonderful because children have everything,” she says. “Children learn a great deal from each other. We don’t even have to tell them.”

Potential students go through a demanding application process to get into Jones’s studio. Academics come first, followed by musical aptitude. Three teachers help with lessons. Each year, 100 or more students apply, and she has to turn many away. She takes as many as she can, she says.

Jones’s influence spreads beyond her studio. First Baptist Church-West sponsors the Clara H. Jones Summer Institute, a six-week program to develop fine arts, math, reading, and science skills for children in grades 1 through 9. She also teaches kids whose parents are struggling financially, adding to her legacy.

How much longer will Jones continue? Frankly, she doesn’t give it much thought. Jones teaches up to four days a week, but she has cut back on her schedule in recent years. She’s also given up one of her favorite jobs, playing at First Baptist Church-West.

“I was our church organist for many years until I decided I didn’t need to work that hard,” she says.

Those close to her say she has many years left.

“Nothing has changed over the years,” Dolby says. “She has the energy of a 35-year-old woman, the way she moves about from piano to piano, teaching styles and lessons and discipline.”

And that’s what keeps her coming back. It’s in her. When it comes to teaching music, Jones is one of those who just has it.

“I’ve never, ever needed a job in my entire life,” she says. “I’ve always had offers. I wouldn’t teach one day if I didn’t really love it.”