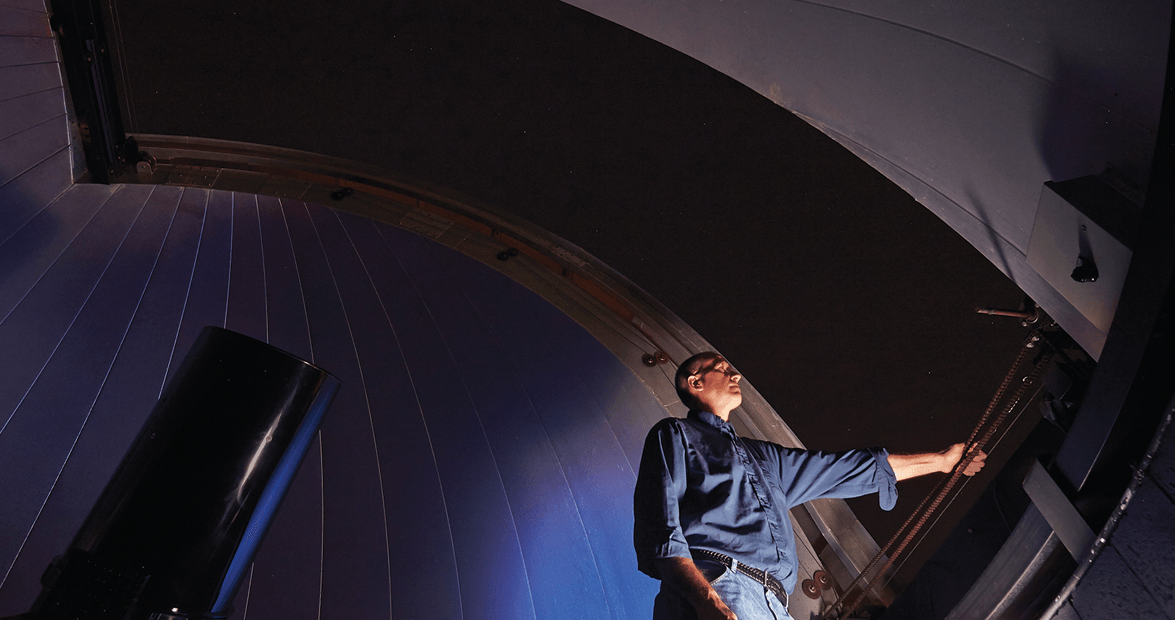 You’ve seen the moon before, but you’ve never seen it quite like this.

When you look through the eyepiece of the telescope at the Cline Observatory at Guilford Technical Community College (GTCC) in Jamestown, you can see the moon’s surface in stunning detail. It doesn’t look like cheese so much as like marble, scarred by craters carved out by errant asteroids and comets. Some of the craters are more than 1,000 miles across.

Everyone who takes a turn at the telescope is in agreement: “Wow.”

It’s a word Tom English, director of the observatory and professor of astronomy at GTCC, hears a lot. “It never gets old, showing people things like Saturn for the first time,” he says. “They just gasp, like — ” He imitates one of the uninitiated, his face lighting up, eyes wide with wonder.

Since opening in 1997, the Cline Observatory has held public observing nights every clear Friday night, drawing about 2,000 visitors a year. Every session is free, and that’s exactly how English thinks it should be. “There should never be an impediment for people to enjoy the universe.”

In May, the observatory upgraded from a 16-inch to a 24-inch reflecting telescope, which makes the Cline tied for the title of the state’s third largest permanently mounted telescope at an educational institution. Once visitors have had their fill of the moon, English leads a tour of the skyscape, showing visitors Sirius, Mars, the Orion Nebula. Through the telescope, you can actually see Jupiter’s rust-colored bands. The four Galilean moons are also visible, prick-points of light that Galileo, their discoverer, first mistook for stars.

“Hey, you can see the stripes!”

“When can you see the red spot?”

With each person to peer through the telescope, English’s grin gets a little wider.

A father has come with his daughter. She tugs on his sleeve. “Dad, can we get a telescope? Please?”

A single moment of discovery at a place much like the Cline was all it took to spark Stan Rosenberg’s lifelong love of astronomy. It happened when he was 8, when his sister took him to an observatory for the first time. “I got my first look at Saturn, and that was it — I was hooked,” he says. “They had to literally peel me from that telescope.”

Now, Rosenberg is the president of the Greensboro Astronomy Club (GAC); founded in 1948, it’s one of North Carolina’s oldest astronomy clubs. The club meets once a month at the Greensboro Science Center to swap stories and photos of what they’ve seen while gazing at the stars. Like other astronomy clubs across the state, it’s a place for people who can’t get enough of the cosmos, who grab their telescopes and congregate in state parks, in observatories, or in their own backyards to marvel at the Carolina night sky.

None of these people, these DIY discoverers, would ever be accused of being what Rosenberg and his fellow GAC members call “armchair astronomers.”

“With the Internet, people can access high-quality satellite feeds and images of objects on their computers. They don’t even need to leave their couch,” he says. “But nothing beats using your own eyes.” The satisfaction that comes with doing your own research, of finding a star or a planet or a nebula and seeing it for yourself, he says, is like nothing else.

Every other month, the GAC holds an “Observe the Moon” session. Earlier this year, in April, the GAC’s session coincided with the Statewide Star Party, an annual N.C. Science Festival event. A star party is exactly what it sounds like: People from the mountains to the coast coming together to celebrate the stars. Unfortunately, this year, a thin veil of clouds hid from view most of the sky’s offerings. (Stargazing, more than most outdoor activities, depends so much on the weather.) Still, Jupiter and the moon shone through the haze, which was enough to keep curious kids happy.

In Rosenberg’s experience, if you set up a telescope and invite others to take a look, they will. “You ask people, ‘Hey, do you want to look at Mars?’ and more often than not, people respond positively, because they’re curious,” he says. “Curiosity is part of being human — we want to explore our universe.”

Like the Cline Observatory, a major part of the GAC’s mission is educational outreach, and like Tom English, Rosenberg loves to “pull back the curtain” for people who may not know what’s out there, helping them to explore the Carolina skies.

Back at the Science Center, star partiers quickly lined up behind the telescopes on the lawn. When the kids peered into the eyepiece, their eyes widened: “Wow.”