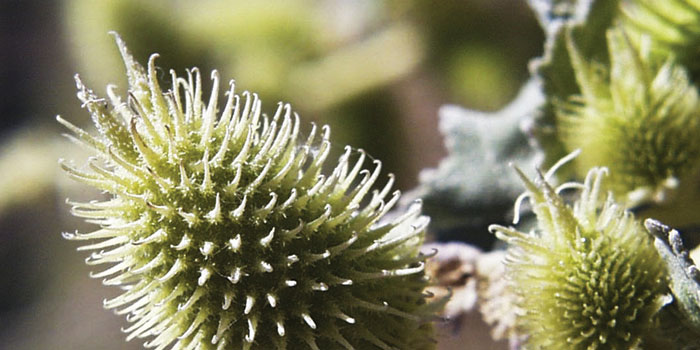 The burs hang on to whatever brushes by. They don’t care where you’re going. They just want you to take them somewhere.
And you do. Every time you pick those prickly burs off your socks, or your jeans, or your pets, you spread the seeds of this native weed.

The common cocklebur, Xanthium strumarium, grows in fields and along rivers across the state. Farmers despise it. Hikers hate running into it.

But it was here before them. And with two seeds distributed in every inch-long bur, it isn’t going away. The seeds rely on the hooked prickles that cover the casing for distribution. After the bur finds a spot, the seeds can germinate right away or lie dormant for more than 10 years.

Although most people consider cocklebur a nuisance — it reduces the crop yield of cotton, corn, and soybeans; it contaminates sheep’s wool; and it’s poisonous to livestock — the plant once had a purpose.

But it’s determined to stick around, spreading its seeds with every bur.

When European settlers arrived on our shores, they saw flocks of multicolored birds throughout the Carolinas and Virginia. After they chartered the Carolina colony in 1663, they named the bird after the area. But those colonists put the native bird in danger. Farmers saw them as pests. Milliners wanted their feathers for accessories. By the 1800s, the Carolina parakeet no longer lived in North Carolina, and by 1918, the species was extinct.