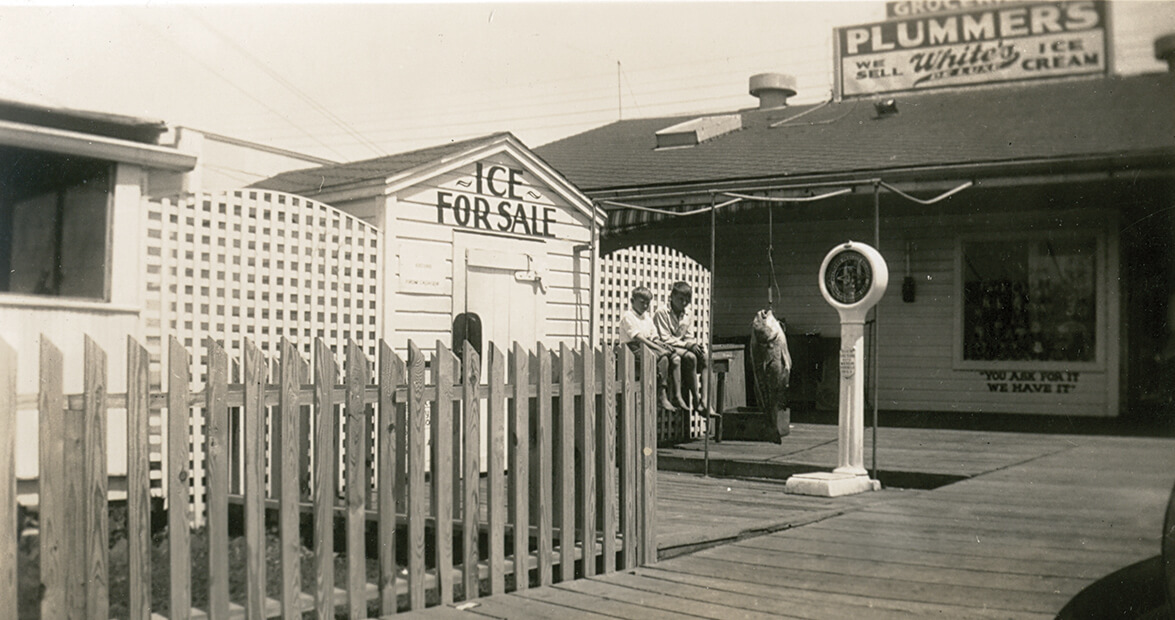 Take a look at the glass of tea you’re drinking. It’s sweet, sure. It may have a wedge of lemon floating around. It may be contained inside a plastic cup or a Mason jar or a proper tea glass. But one of the most important qualities of this signature drink of the South is its temperature. Our tea is ice cold.

We take cold tea for granted. We store it in pitchers in our refrigerators to keep it chilled. We reach inside our freezers, grab a handful of frozen cubes, and plunk them in our glasses. We never expect to be served lukewarm tea.

But the quality of our tea that suits the hot, humid South, that quenches our thirst during the dog days of summer, that gives it the name “iced tea,” wasn’t always easy to come by. This is the history of ice in Wilmington, NC.

“The ice crop prospects, under the present mild weather circumstances, are a matter of some concern,” reported Wilmington’s Daily Star on January 11, 1874.

Four years later, the paper warned readers: “Capt. Foss reports that there was no more ice in the Massachusetts streams when he left there than there is in the Cape Fear river.”

These were the days of the natural-ice trade. Back then, an iceless winter meant an iceless summer. North Carolina and other states relied on shipments of ice harvested in New England to keep them supplied throughout the warmest months.

In the early 1800s Frederic Tudor, a Boston merchant, began shipping ice to the West Indies. Tudor is credited with turning the natural-ice trade into a booming business. By 1830, ice was common in many American homes.

With its port on the Cape Fear River and the opening of the Wilmington and Raleigh Railroad in 1840, Wilmington became important to the natural-ice trade. During the winter, men in the North cut ice from ponds and lakes. The men were only able to harvest ice 20 to 30 days a year. The process was arduous and required hard labor with picks and chisels and horse-drawn equipment. Once the ice cakes were cut, they were stored in icehouses and shipped south on schooners.

Around 1845, a local pharmacist and a Baptist minister built an icehouse in Wilmington between Water and Front streets that could store 130 tons of ice. Like other icehouses of the time, it was insulated with straw and sawdust.

Families purchased ice from local icehouses to keep perishable goods from spoiling. The ability to keep fruits and vegetables cool became an economic advantage for produce companies. In 1900, the Fruit Growers Express Company started construction on a “large icing station” in Teachey, about 45 miles north of Wilmington. The best news was that the station would be completed in time for the strawberry crop’s arrival.

Hospitals also relied on ice for treating people with fever and other ailments. Ice took on cure-all qualities. “Pounded ice applied to the spine is said to cure sea sickness,” proclaimed an article in August 1871. “A bit of ice will help diptheria and all other throat complaints.”

By the 1850s, Americans had acquired the “ice habit,” Tetterton says. “Once people who endured sweltering summers became accustomed to cold drinks, they were hooked for life.”

In 1879, an article appeared in Wilmington’s Daily Star that heralded the change of the ice industry.

“Yesterday, by invitation, we witnessed a test of the new ice machine invented by Dr. J. E. Winants. … it seems that there can be no room for doubt that ice can be successfully manufactured by this process.”

Wm. E. Worth & Company opened North Carolina’s first artificial ice factory in 1885. By 1887, Tetterton says, the plant produced 24,000 pounds of ice a day. An 1889 advertisement for Wm. E. Worth shouted: “ICE! We are now making THIRTY FIVE tons of flint Ice daily … Our facilities for making Ice are such that we Solicit Your Orders With confidence, believing that we will always have the ICE to fill them.” By 1900, Wm. E. Worth & Co. claimed to be the largest ice manufacturer in the state.

As early as 1890, machine-made ice began to drive out the natural-ice trade. In 1905, the South produced more than 18,000 tons of ice daily, compared to only 500 tons in 1885. By 1904, the Wilmington Dispatch reported that Maine’s ice harvest for the season had dropped by 200,000 tons in the last year. It went on to say that “present systems of artificial refrigeration are crowding nature out of the field of competition.”

Customers questioned if this man-made ice was as good as the natural product. And ice companies answered by touting their ice as clear and pure.

In 1911, Plate Ice Company, located on Orange Street in Wilmington, declared that, “Plate Ice Stands for Purity.” That same year, The Independent Ice Company, also of Wilmington, detailed its ice-making process. “To begin with we use water from deep wells, cold and pure, made into steam, then condensed to distilled water.” The company then boiled and reboiled the water, filtered it twice through willow charcoal, and froze it in galvanized iron cans.

The companies promised their manufactured product would last longer than natural ice. And they delivered it door to door in ice wagons. Red ice wagons traveling Wilmington’s streets became the icon of The Independent Ice Company.

The men who drove the ice wagons became familiar fixtures about town. They visited houses daily, leaving however much ice the woman of the house desired. Household ice delivery also created a market for iceboxes. In 1935, a Polar Air refrigerator, capable of holding 47 pounds of ice, cost $17.95. The ice was stored in one compartment, and the chilled air circulated throughout the box to the food-storage compartment.

By the 1930s, manufactured ice was big business.

On a recent Tuesday, Archie Harris sits at his desk in the back of Rose Ice Company. He pulls out a card with four numbers on it: 25 and 50 on one side, 75 and 100 on the other.

It’s an order card that Wilmington residents hung in their windows to let the iceman know how many pounds of ice to leave at their houses.

Harris brings out an ice pick with Rose Ice & Coal Co. written on one side. The address and “Phone 40” is written on the other. That was the phone number years ago for this Wilmington company that started here in 1933. At the time, Wilmington had at least five ice companies. Today, Rose is the only one left. The white, block building that houses the business still has “Rose Ice & Coal Co.” painted in capital letters across the front.

“Almost every ice business also had coal,” Harris says. “If you sold ice in the summertime, you’d starve to death in the wintertime.”

When Harris bought the business from the Rose family in 1973, he still sold coal, and he still delivered ice to some houses on a regular basis. Today he no longer sells coal, and his primary ice customers are restaurants, chemical companies, grocery stores, and convenience stores.

Harris might not be as well known around town as the icemen of the early 1900s, but he knows this industry. Last year he was the chairman of the International Packaged Ice Association. He’s a member of the Southern Ice Association Hall of Fame. His ice has even been in the movies.

When directors of the TV show “Dawson’s Creek,” which was filmed in Wilmington for six years, needed an ice rink, Harris provided it. When the props man on the set of Firestarter, also filmed in Wilmington, couldn’t figure out how to make a wall of ice melt in an instant, Harris came through with a plan.

“I told the director, ‘If you’ll get your people out of here, my people will have the ice in here in 10 minutes,’ ” he says.

Leave it to a Wilmington native to know how to handle the ice business.

Harris and Rose Ice Company now service much of southeastern North Carolina. His business is seasonal, and he still about starves in the wintertime, he says. But he’s carrying on a business in this town that’s lasted almost two centuries. The memorabilia he keeps shows it means something to him.

And you can guarantee Harris doesn’t take it for granted when he plunks a few pieces of ice into his glass of tea.

This article appeared in the print edition under the headline “Cold Gold.”