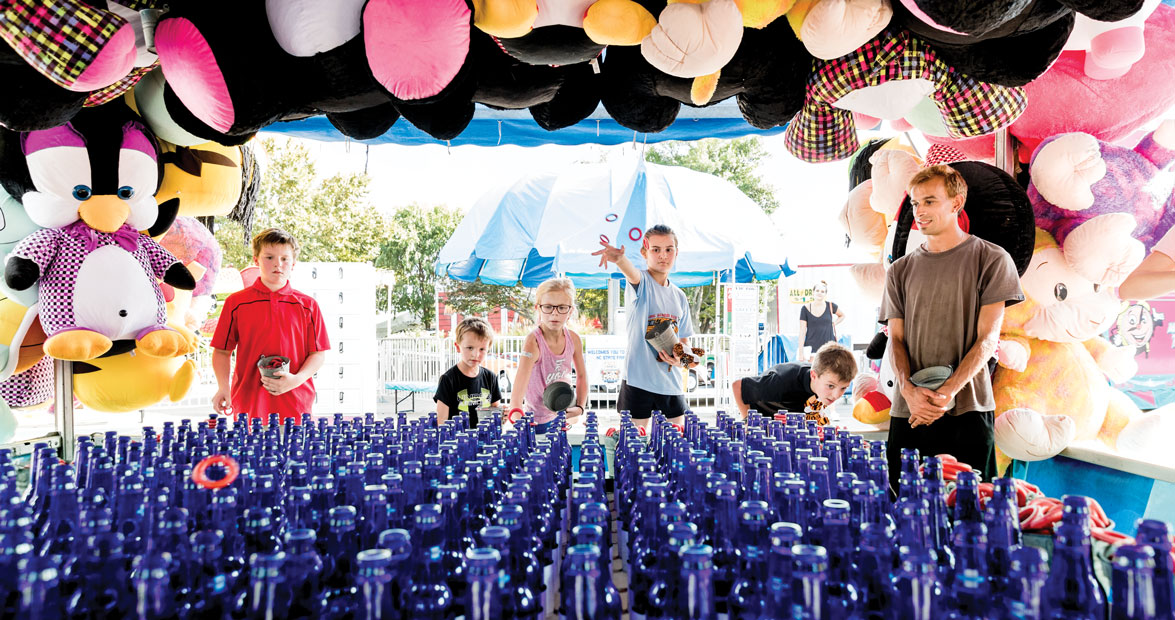 On its surface, the State Fair in Raleigh — held this year from October 17 to 27 — is all about fun, but deep down, everything is about competition. This is one of three stories about the North Carolina State Fair. Read Ambition Blooms or Pickle It. Jam It. Win It. for more.

The North Carolina State Fair hasn’t even started yet, but the midway is already swarming with police. Sgt. Dave Bradford lifts up his dark sunglasses, squinting against the sun, to scrutinize the hoop toss. So many distractions to block out: Neon signs flashing everywhere. Busy workers riding by on bikes, with bulging plastic bags full of fuzzy stuffed animals, bananas, and Minions swung over their shoulders. ONE IN WINS, the sign promises. Bradford shifts his weight from foot to foot, his badge and gun holster peeking out from under his shirt. Stuffed Winnie-the-Poohs and Rastafarian monkeys silently stare him down. The barker, a big, sweaty guy in a bright green T-shirt, holds out a basketball.

Bradford grabs it and squares up to take the shot. “Loser!” his 13-year-old daughter, Allyse, calls out behind him as the ball bounces off the rim and rolls down the rainbow netting beneath it. “Bradford’s lost his touch,” hollers the sheriff’s chief of staff, Larry Wood.

Allyse sidles up next to her dad, high ponytail bouncing. “Let me try.” The barker hands her a ball as Bradford steps back, his thumbs in his belt loops. She evaluates the basket with fierce concentration, her tongue sticking out. Then, she lets her shot fly. And … misses.

“Oh, no!” she yells in defeat. The barker quickly scoops the ball out of the net and hands it back to Bradford. This time, the sergeant makes it, and he raises both arms high in victory.

The barker finally cracks a smile. For the rest of the week, he’ll be silently hoping that players lose, but today he’s cheering them on. Because, before he’s allowed to work this booth on opening day, which is tomorrow, he needs permission, and to get permission he has to prove that the game is winnable — to the sheriff’s deputies. And their kids. 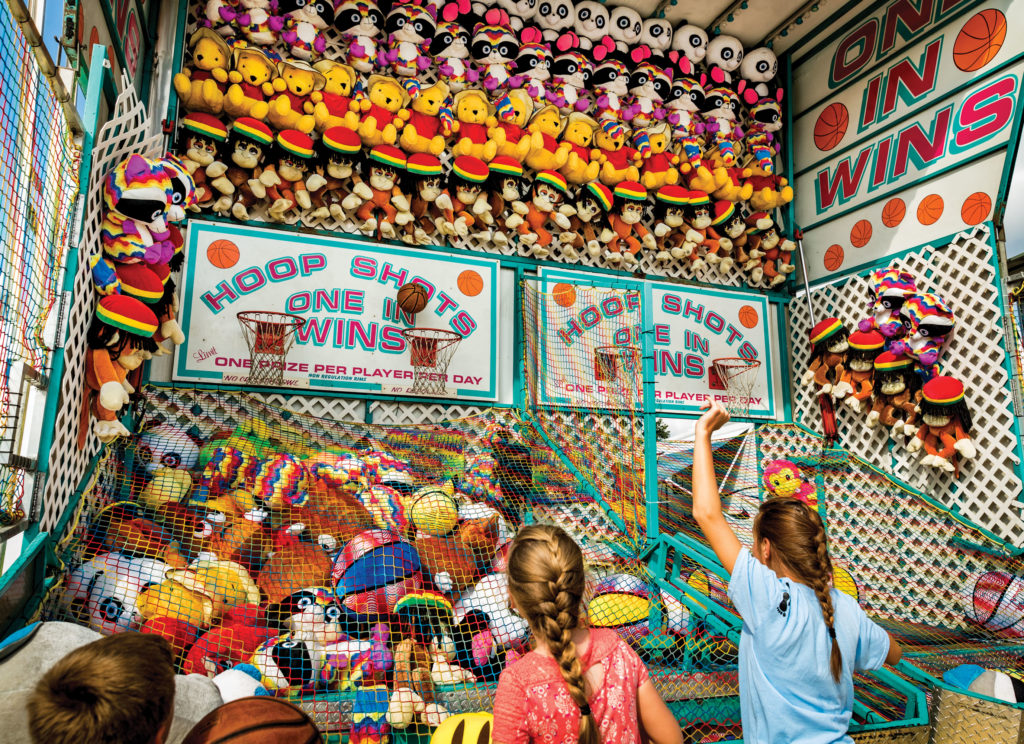 Kiara McCormack (left) and Laney Vullo, both 11, show the adults how it’s done at the hoop toss. Every year, Raleigh police and a select team of kids ensure that all of the games at the State Fair are winnable. photograph by Charles Harris

Since 1991, the Wake County Sheriff’s Office has been charged with inspecting the midway games at the North Carolina State Fair. The largest mobile midway of any state fair in the country, it features close to 100 games and takes a full two days to inspect. It requires an official inspection because, while most games are designed to be challenging, there’s a limit to what’s allowed. At the hoop toss, the rim looks regulation size from afar, but is bent into an oblong shape. At the rope ladder, both ends are suspended over pivoting pulleys. At the milk-bottle toss, the bottles are heavier than they appear and weighted toward the bottom.

But the sheriffs aren’t concerned with how hard it is to win; they just want to know whether you can. They want to make sure that the signs are clear and that fairgoers won’t be misled. An officer makes sure, for instance, that he can pass a basketball through the hoop by hand — plus, read the fine print on the sign: Baskets are not regulation size. He will check to make sure that, with some minor adjustments to his center of gravity and limb placement, a ladder can be climbed. And that the bottles can be picked up and tipped over — which Maj. Terry Putman demonstrates easily. “Just because you can’t win doesn’t mean a game is impossible,” he says, grinning. 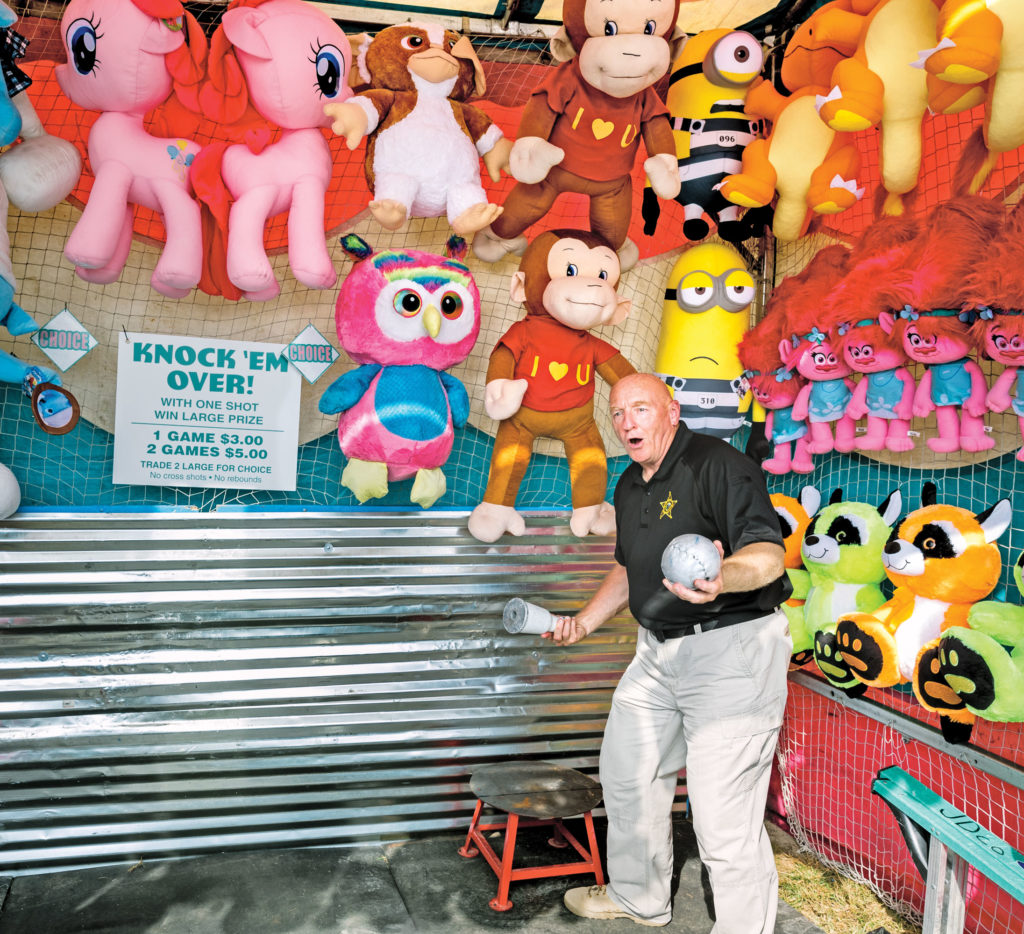 The glass milk bottles are thick and gray: two on the bottom, one balancing on top. The barker hands him a ball, but Putman climbs inside the booth instead and picks up the bottles, turning them this way and that. Satisfied, he sets them back with a clink.

Putman has been inspecting the games for 20 years. He recognizes many of the same barkers, who come back year after year, following the games down to fairs in Florida and across the Midwest.

He knows how easy it is to turn a fun game into something impossible. Somebody has to make sure the good people of North Carolina know what they’re getting into between fried Oreos and the Ferris wheel.

About 12 years ago, the sheriff’s office had an idea: Why not bring in a little help?

And so, on a hot, early-October afternoon each year, children become the game testers of the midway. “We have to be here, so we might as well have a little fun,” says Maj. Eddie McCormack, who brought his wife, Linda, and 12-year-old daughter, Kiara, for the second year. The McCormacks are part of a group of around 15, led by Wood, whose 9-year-old granddaughter, Lilly, skips along beside him. “This is a tradition for lots of people,” Putman says. “Some families from the department have been coming for years.”

As the day stretches on, the adults seek out shade under tent flaps and turn their faces toward a tiny breeze. The kids are busy throwing darts at balloons, shooting targets with water guns, and tossing rings around bottle necks. When it comes time to shoot a star with an air rifle, the sheriffs make their kids wait: It’s their turn. They line up, real guns holstered on their hips and forgotten in favor of bragging rights.

An official Wake County Sheriff’s Office golf cart follows the group, carrying a huge cooler filled with icy water bottles. The kids pile in. They sit in each other’s laps, grateful for a pocket of shade, on 30-second rides between booths. The adults walk wearily behind with clipboards. As the cart pulls up to a water gun shoot-off, the kids hop out and race to the seats. There’s no waiting in line today. No swarms of people to contend with. No impatient whining. And the air isn’t thick, like it will be tomorrow, with the smells of funnel cakes coated in powdered sugar and salty ears of buttered corn — the food vendors are still setting up. 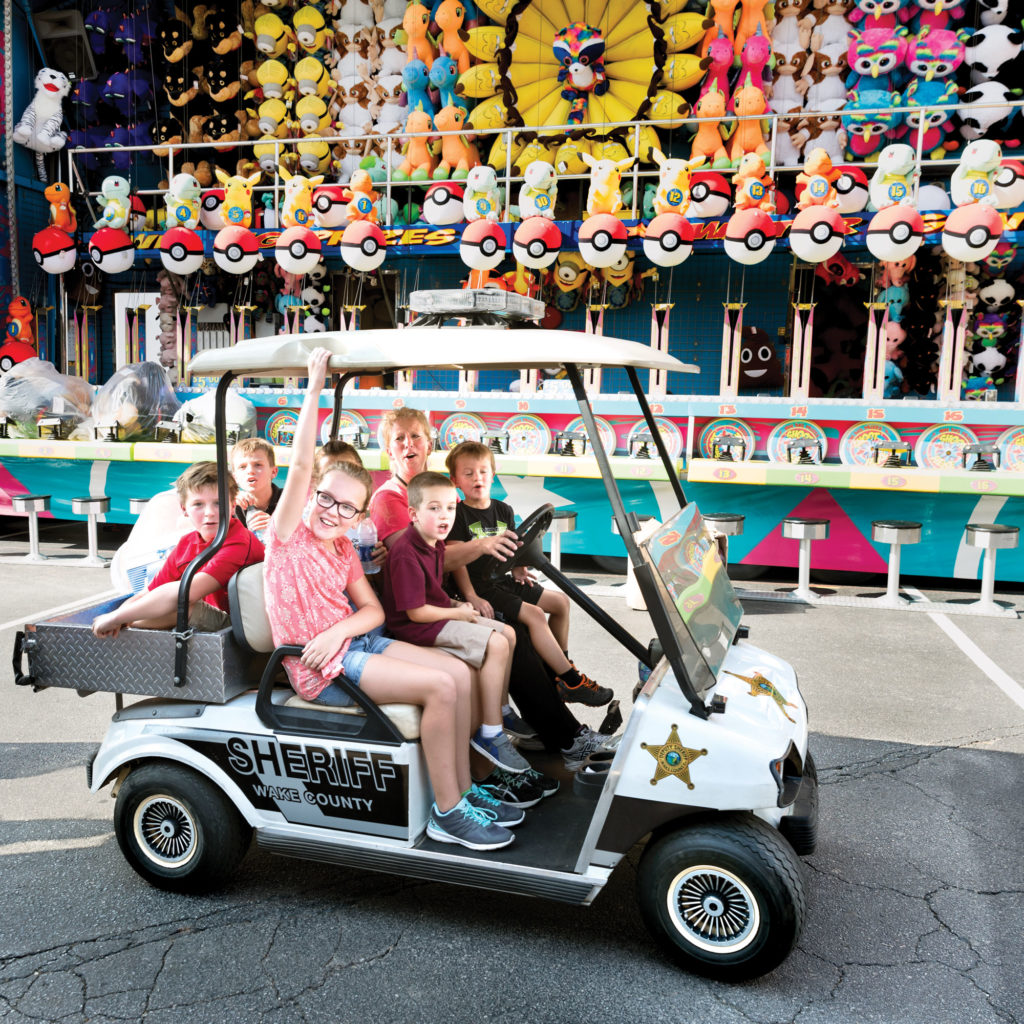 “Dad, you have to do it like this,” Allyse says as she demonstrates the perfect way to aim the water gun. Bradford nods, taking his daughter’s instructions seriously. His 5-year-old son, Wyatt, laughs at him. “Yeah, yeah, we’ll see what happens,” Bradford says, and the bell chimes.

“Took them forever to get through this section last time,” Putman says, wiping his brow. It’s already been a long day, and the games are starting to lose their charm. Good thing he has the help of some true professionals.