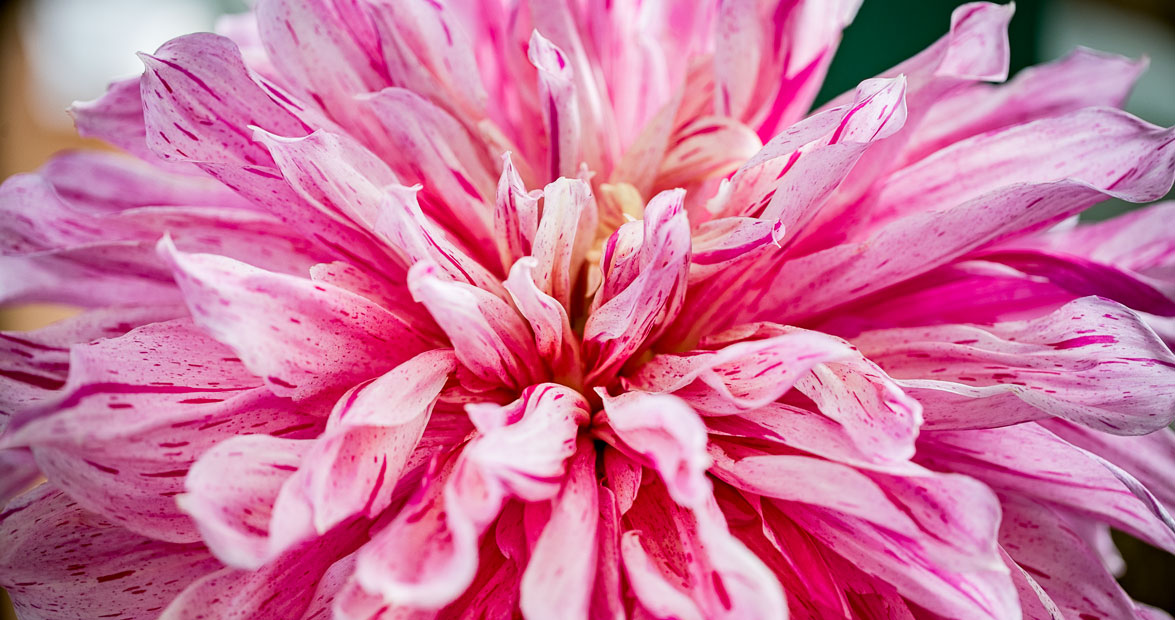 On its surface, the State Fair in Raleigh — held this year from October 17 to 27 — is all about fun, but deep down, everything is about competition. This is one of three stories about the North Carolina State Fair. Read Pickle It. Jam It. Win It. or Conquering the Midway for more.

Denise and Jimmy Speas knew their Maki dahlia was a winner as soon as they snipped the stem the evening before and brought it inside — slowly, so as not to trip. The seasoned State Fair competitors had watched the purple-flecked pink beauty bloom in their backyard in Davidson County. Unlike their buttoned-up pompons or smooth decorative dahlias, the Maki unfurled with giant, disorderly waves of color. They’d never had a bloom so big, either — it was a real showstopper.

“I posted it on Facebook and people at church said, ‘We thought maybe you’d bring it and let us see it!’ ” Jimmy says, knowing, of course, that he would never risk such a journey. He had to get it to the competition first, which he did this morning in a clear glass jug, stabilized by prayers and a sturdy flower carrier. “We stuck it in with the fennel,” Denise explains. 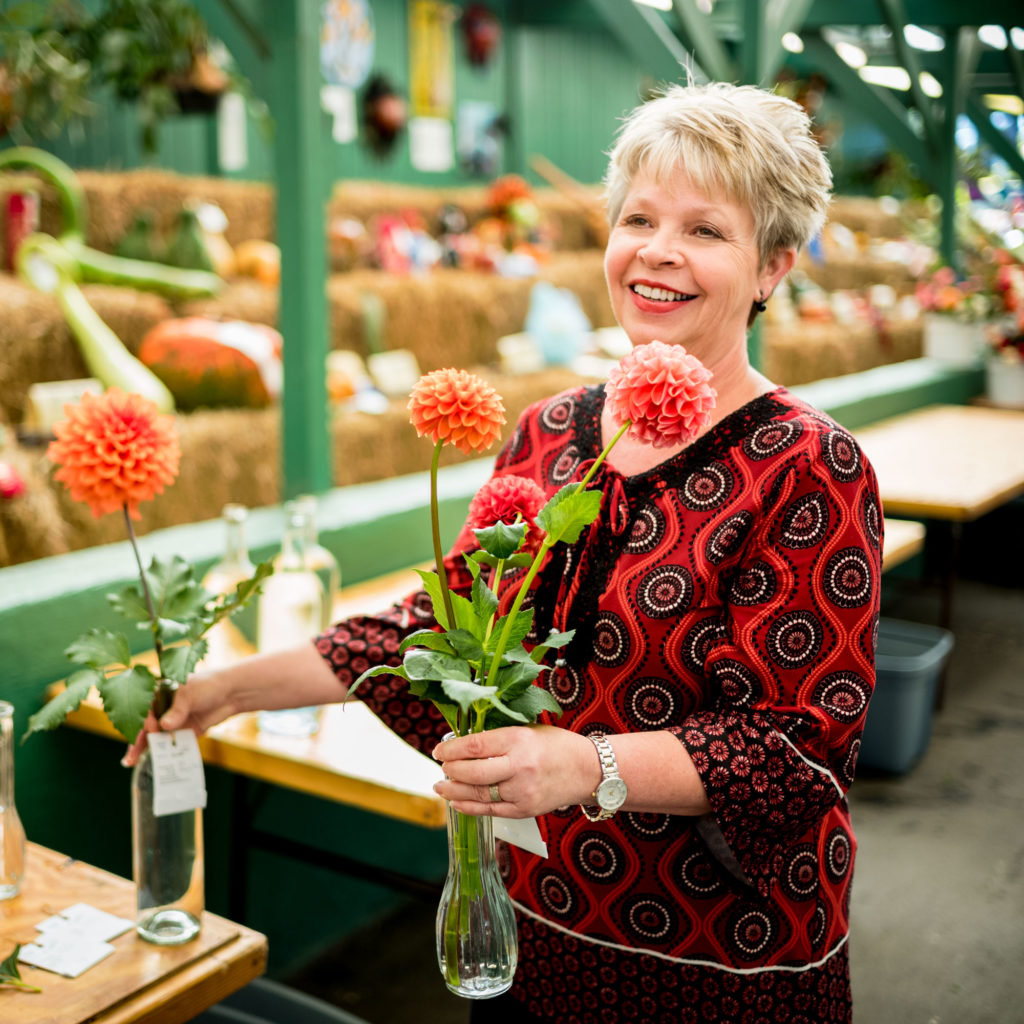 The Speases enter a rainbow of dahlias and roses each year. photograph by Charles Harris

Now, it awaits judgment under an awning outside the Flower House building, while the Speases groom their other botanical entries for afternoon competition. Jimmy snips and tweezes the last little imperfections from their stems, and Denise walks them — again, slowly, carefully — inside to the clerks. Their table is strewn with trimmed leaves, glass bottles, and discarded flowers whose necks drooped unexpectedly on the ride over. A few are worth saving. “If the leaves don’t look good, you can cut the holes out,” Denise says. Jimmy reaches into a tackle box full of grooming tools — toothpicks, embroidery scissors, measuring tape, Q-tips, peppermint Life Savers — and pulls out a pair of pinking shears. 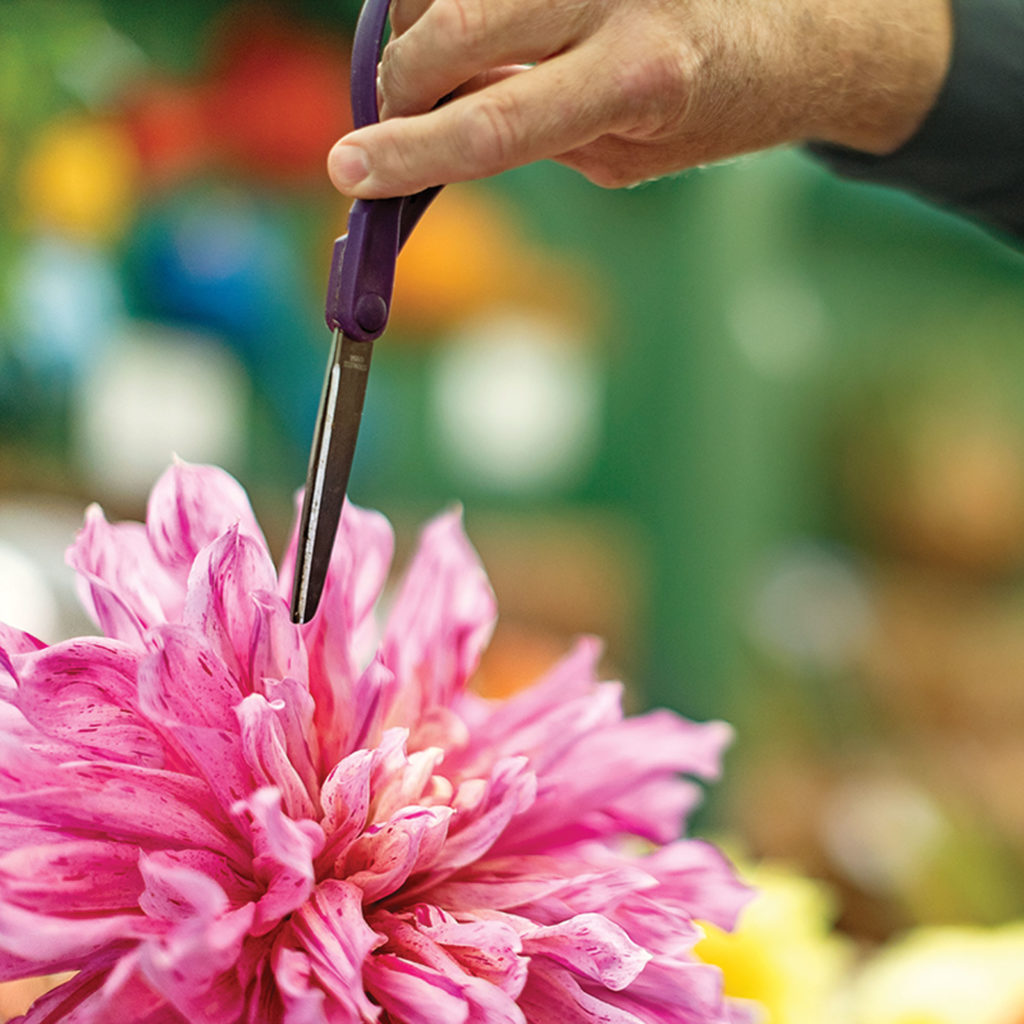 Jimmy Speas brings a tool kit to groom flower entries at the fair, including his enormous pink Maki dahlia. photograph by Charles Harris

Around noon, Kim Pendergrass, a real-estate agent who had to list a property before bringing her family’s entries, arrives with her 11-year-old son, Ivy, and slings a laundry basket filled with flowers and herbs onto their assigned table. “Are you last-minute again?” someone hollers in greeting. “I always do last-minute,” she calls back, grinning. “That’s when I do my best work!” So many contestants come back year after year that it feels like a homecoming.

Inside the Flower House, an industrial-size box fan ruffles the black-skirted tables where early entries struggle to keep their chins up in the humidity: dahlias on one side; foliage-forward entries in the middle. Roses are present, too, as are elephant ears, horsetails, and ferns. And then there’s a section of single-strand, unadorned clippings — catnip, rosemary, castor beans, goldenrod — striving to look as important as their showy neighbors several tables over.

“These are the gateways,” says Competitive Exhibits Manager John Buettner, laughing about his nickname for the fair’s most humble entries. Gateway entries don’t require much effort, but they give first-time competitors a taste of participating in the fair. “People don’t usually groom their castor beans,” he says, chuckling. “They just bring them in.”

Each year, thousands of people enter State Fair competitions, arriving with giant pumpkins and strawberry jam, home brew and hay bales, needlepoint and backyard chickens. Even bees. But it doesn’t get any easier than the cut-flower show, where it’s entirely possible to snip a sprig of mint from the yard, stick it in a vase, and win a blue ribbon.

The garden competitions just outside the Flower House take considerable work: Competitors actually grow plants on-site throughout the season for a chance to win one of the $800 blue-ribbon prizes. The competition is tough. Only three entries are allowed in each of the nine themed gardens.

Both the Flower House and the gardens are located under a canopy of trees near Gate 6, not far from the lake, on a two-acre spot that’s like a secret garden. Fairgoers who stumble upon it for the first time discover a part of the fair that has nothing to do with fried Snickers bars and long ride lines. Here, meandering pathways, lined with ferns and hostas lead to bubbling fountains, arched bridges, and a gazebo. Children can pull the rope on an old-fashioned bell, or scramble onto a giant chair to glimpse the Ferris wheel, or listen to the John Deere tractor engines churning ice cream at Heritage Circle. At night, the walkways and trees glow with twinkling lights. 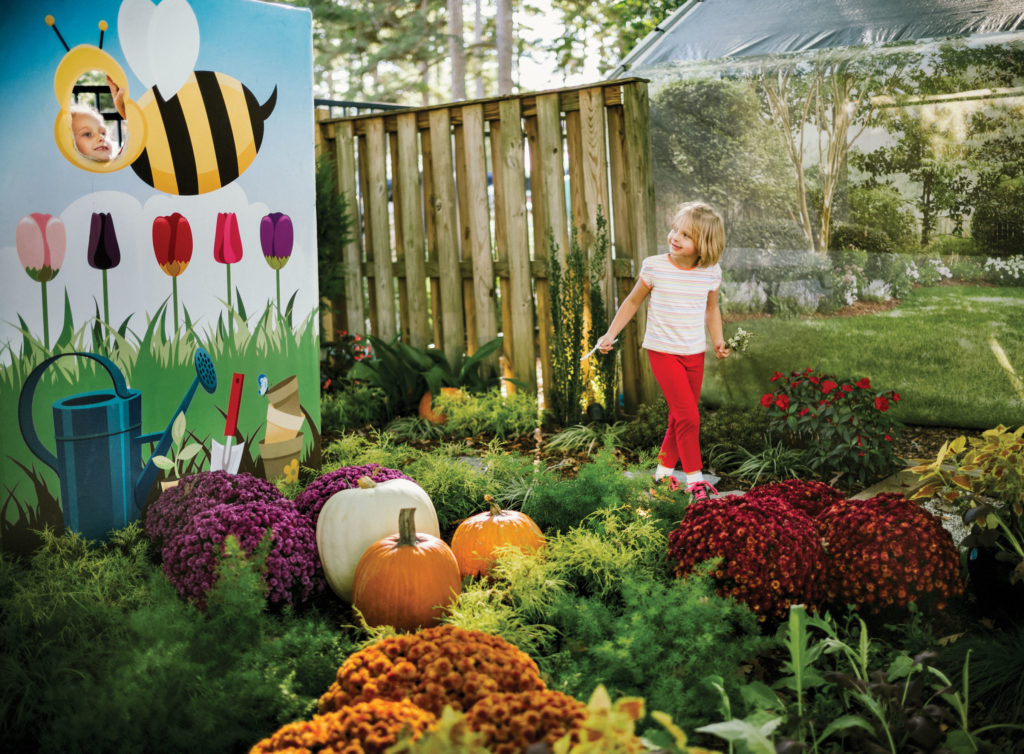 A peaceful oasis: The two-acre garden area on the fairgrounds is full of pleasant surprises, from quirky little garden plots to shady benches. photograph by Charles Harris

“This is our moment in life!” exclaims first-time entrant Shaun Millington of Pittsboro, who’s examining the plot he created with his wife of 15 years, Angie Abrams. (“People know us as “Shangie,” Angie says, “because we’re always together.”) Garden judging just wrapped up, so they’ve come to see what they won. “This is the first time we’ve been in the fair,” Shaun says. Angie scans their little garden, looking for a ribbon. Hoping for blue, of course. “Oh, yesterday, we were a wreck,” she says.

Not every state fair has garden competitions, but in North Carolina, it’s a cherished tradition. “People go nuts,” John says of the impassioned competitors, “and we get to know all of them.” Part of his job is coming up with the themes each year for the various garden competitions, like “Secret Secret Garden,” which he describes as “a garden that’s in your front yard, disguised in your flower bed so your HOA doesn’t kick you out for growing vegetables.” Shangie’s garden is in the “Color Me Crazy” category.

When they finally spy a ribbon in their little plot — a white one, alas — their disappointment is fleeting. “I don’t care that we got third,” Shaun says with a huge grin. “We got to be in the fair.”

With most of their entries turned in — half under Denise’s name, half under Jimmy’s — it’s time for the Speases to hand over the Maki. “It’s bigger than my head!” John exclaims when he sees it. The clerks place it on the far end of the table, but it’s impossible to miss, even from the other side of the building.

Outside, latecomer Kim Pendergrass has picked up her pace. Dressed in jeans and flip-flops, she murmurs to herself as she pinches off bad leaves and tags her entries.

Her son, Ivy, passes the time flinging leftover petals into the air. “Here, take this one,” she says, handing him a vase of goldenrod. “Go, go, go!” Then, not a second later: “Oh, wait, come back!” She forgot the tag.

“Fifteen minutes! Ladies and gentlemen, you have 15 more minutes!” a clerk calls over the loudspeaker. Sparrows chirp and flit in the rafters. Lazy bumblebees are roused from blooms that must be taken in. Six minutes before the 2 p.m. deadline, Kim walks in her last vase.

An hour later, judges wearing comfortable shoes, with clipboards and notebooks in hand, begin their rounds. “These people took time out of their day to come down here and bring fresh-cut flowers,” says dahlia judge Megan George, marveling at the array of entries. “And they nurtured them all summer long, just to get to this.” She and her judging partner, Sandra Zazzara, tilt the jar vases and hold them up to eye level, examining stamens and foliage. The rainbow of dahlias has become quite the attraction. Pink, red, orange sherbet, dark purple, but no blue ones. There’s no such thing. Yet. 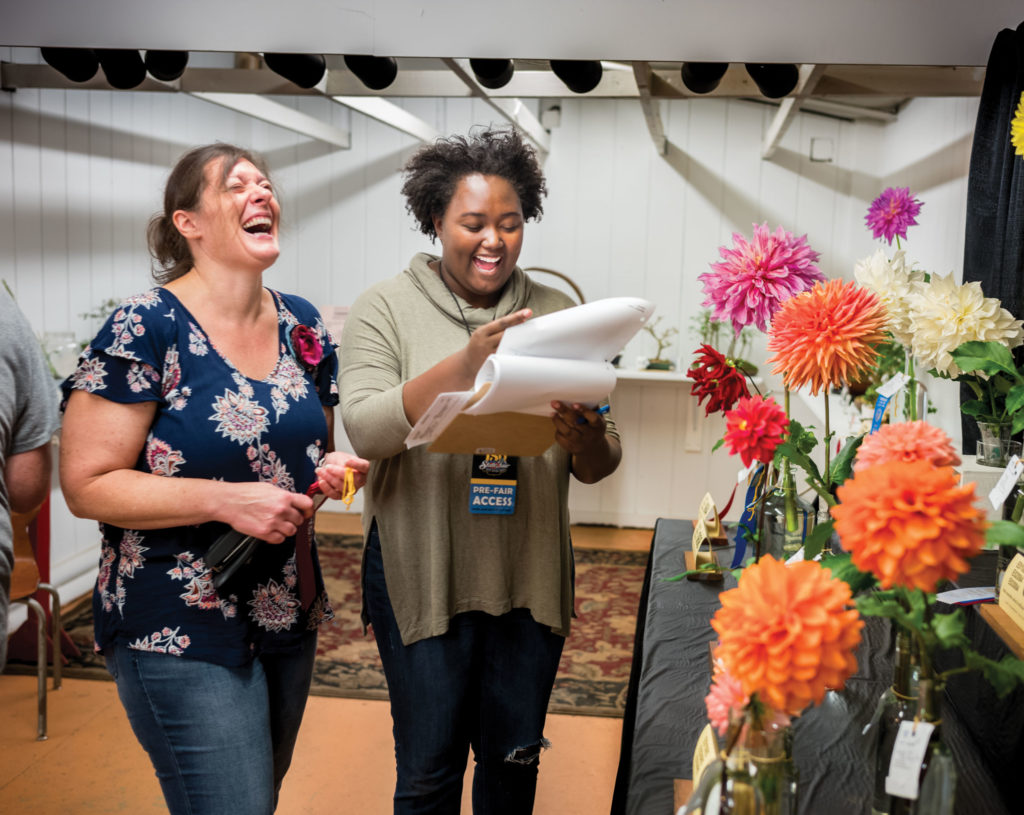 Megan and Sandra are stunned by the pink Maki. “I’m in love with this thing,” Sandra gushes. “Holy cow. It is so impressive!”

“I love that they decided to leave a little bit of foliage,” Megan says thoughtfully. “I’m a foliage person. So I appreciate keeping that nod to the actual plant.” She and Sandra continue to marvel at the Speases’ Maki: its size, its intricate architecture, its rare beauty. In fact, they seem reluctant to leave its side. “It just makes me feel,” Megan says, pausing for the right word, “a little bit joyful.”

Fair Game: Pickle It. Jam It. Win It.