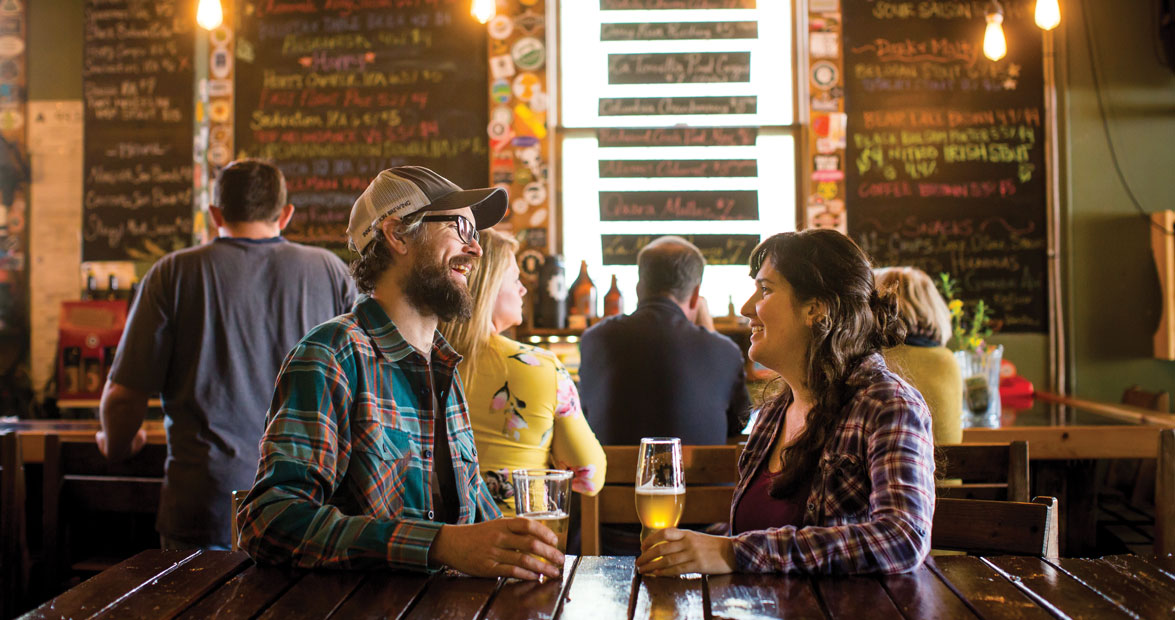 Nicole Dexter was balancing on top of a creaking old walk-in cooler when the idea came to her. Trying to stretch their tiny budget, Nicole and her boyfriend, Chip Owen, had bought the cooler at auction in Virginia and hauled it back to the brewery they planned to open in Sylva — still unnamed, six months into construction. Now they were trying to get the warped old panels to click together, which is why Nicole was on her precarious perch.

“It was sketchy and stressful, and I’m like, ‘What if we call this place Innovation?’” she says. “We’ve had to get so innovative with every single thing we’ve done in this place.” The name stuck, though not without some unexpected complications, and so has the brewery. Since it opened in 2013, Innovation Brewing has thrived, making dozens of creative, high-quality beers and a warm community gathering place in Sylva, and anchoring a newly bustling downtown. 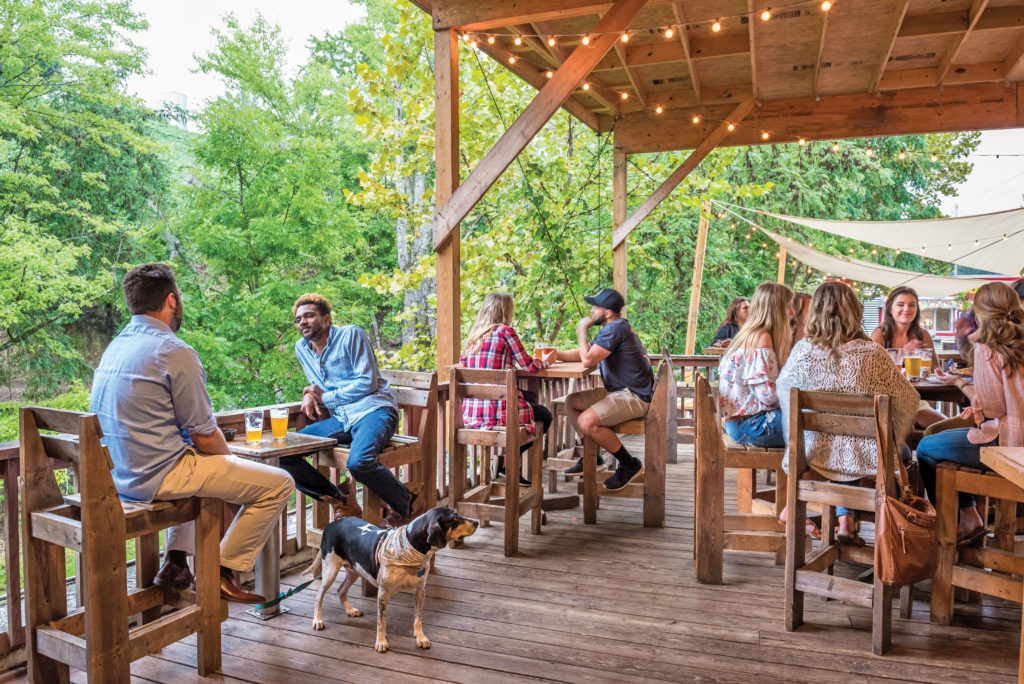 Most of Sylva sits along Main Street, a classic strip of bookstores, boutiques, banks, and offices so postcard-perfect that film director Martin McDonagh chose it as a stand-in for the fictional town in his Oscar-winning movie Three Billboards Outside Ebbing, Missouri. The cupola-topped Jackson County Courthouse looms benevolently over downtown. On a rainy late night, the scent of sweet balsam permeates the air, and the hum of friendly chatter spills out the door of Innovation. All is delightful in this corner of the world, and Sylvians know it. With a half-full pint on the bar, one local is given to declare: “Sylva is the New Orleans of the Carolinas!” It’s a knowing exaggeration, said with tongue firmly in cheek, but, as everyone knows, there’s always a little truth in a joke.

On a Saturday night at Innovation, the good times are rolling, and the New Orleans boast doesn’t seem quite so far-fetched. The taproom is colorful and cozy, and the patio outside is festooned with lights and packed with college kids and graying locals, babies and dogs. One couple studiously reads books while nursing their beers as the skinny singer on the makeshift stage leads his band through a convincing Merle Haggard cover. There’s a food truck, too, but everybody’s here for the beer: hoppy beer, malty beer, sour beer, Belgian beer — 32 total. “Our business model has never been distribution-heavy, or trying to be in grocery stores and across the country,” Nicole says. “It’s always been about creating a gathering place that didn’t really exist before.”

A lot of people dream about owning their own brewery, and a lot of them are home brewers, but not many follow through. Then again, not many have five beers on tap at home, as Nicole and Chip did at their house in Asheville. Not all have the same appetite for risk, either. “We by no means came from money,” Nicole says. “I think we had this mentality of, ‘Well, if it doesn’t work, we’re in the same boat we’re in now, so why not go for it?’ ”

The couple began scouting locations outside Asheville, knowing they didn’t want to be the city’s umpteenth brewery, and they’d all but given up when someone suggested Sylva. They fell for it almost immediately. “Sylva is like a hidden gem of the world,” Nicole says, and she really means it. “You have all the great things about western North Carolina — the rafting, the mountain biking, the hiking — but the whole economy isn’t tourism-driven. Western Carolina University keeps a year-round population, and it also keeps a really educated, open-minded population around.”

They found a filling-station-turned-wine-shop just off Main Street, on the banks of Scott Creek and across from the railroad tracks, and started renovating it, putting in hours of work after their day jobs and sleeping on an air mattress when they didn’t have the energy to commute back to Asheville. Chip’s expertise as a mechanical engineer proved essential: They crafted the furniture themselves, built the bar from old pallets, and hung drywall. In the early days of the brewery, with a one-barrel brewing system and 12 fermenters, the couple had to trade off tasks to keep the taps filled: Chip would spend the morning working to finish the brewery while Nicole brewed, then Nicole would tend bar at night while Chip brewed. Finally, friends staged an intervention and demanded that they hire help.

“I would say that planning is not one of our strong suits,” Nicole says with a laugh. These days, Innovation has a larger staff, giving Nicole and Chip, who have since married, a more reasonable schedule, and a chance to spend time with their 1-year-old son, Crosby (spotted in the taproom, sporting a T-shirt from Colorado’s Avery Brewing). Among the staffers is Chance Clendenin, who started as a volunteer and is now Innovation’s head brewer, overseeing an operation that has expanded to 14 seven-barrel fermenters producing 1,200 barrels of beer per year.

Trying to do too much — too many flavors, too many experiments — is a common mistake for craft breweries, as Nicole acknowledges. “People come in and see how many beers we have and instantly discredit us, because they’re like, ‘All these beers can’t be good,’” she says. “But we would never sacrifice quality to have a variety.” Innovation’s lineup is creative, but not over the top: The Hoppy Camper lives up to its name with a bitterness that’s offset by a malty depth. The Spaceman Pale is a smooth ale with a tropical aroma. Even a peanut butter amber is more gustatory than gimmicky. Regulars order it with a chocolate stout in a Reese’s Cup-esque black and tan.

Early on, Nicole and Chip wondered whether the community was big enough — and thirsty enough — to keep the brewery afloat. They calculated that if they poured 42 pints a night, they could break even. But the Sylva community has embraced them from the beginning. The bigger challenge came from farther away. A day or so before the period allowed for opposition to their name trademark on “Innovation” closed, they learned that a much larger craft brewery in Michigan had objected, saying the name was too close to its own slogan, “Bottling innovation since 1985.”

Lawyers got involved, and the case dragged on for four years. Finally, on December 22, 2017, Innovation’s attorney called with good news that the trademark was approved. “It was like, ‘Christmas is made for me now! I don’t really need anything else,’” Nicole says.

With that challenge behind them, Nicole and Chip were able to expand, taking over the remaining space in Innovation’s building. They’ve opened a wood-fired pizza restaurant, too. With its building in Sylva filled, the brewery also is preparing to take over an old railroad depot in Dillsboro, two miles down Scott Creek, which will house a small-batch test system, oak barrels, and other conditioning equipment — and a taproom, for good measure.

Of course, having facilities two miles apart will create its own logistical problems, especially since all the brewing will still happen in Sylva. So the brewery is also refitting a dump truck with a transfer tank to transport beer to Dillsboro. It might seem like a complicated solution, but it’s true to the name and spirit of the place. After all, innovation isn’t supposed to be easy.