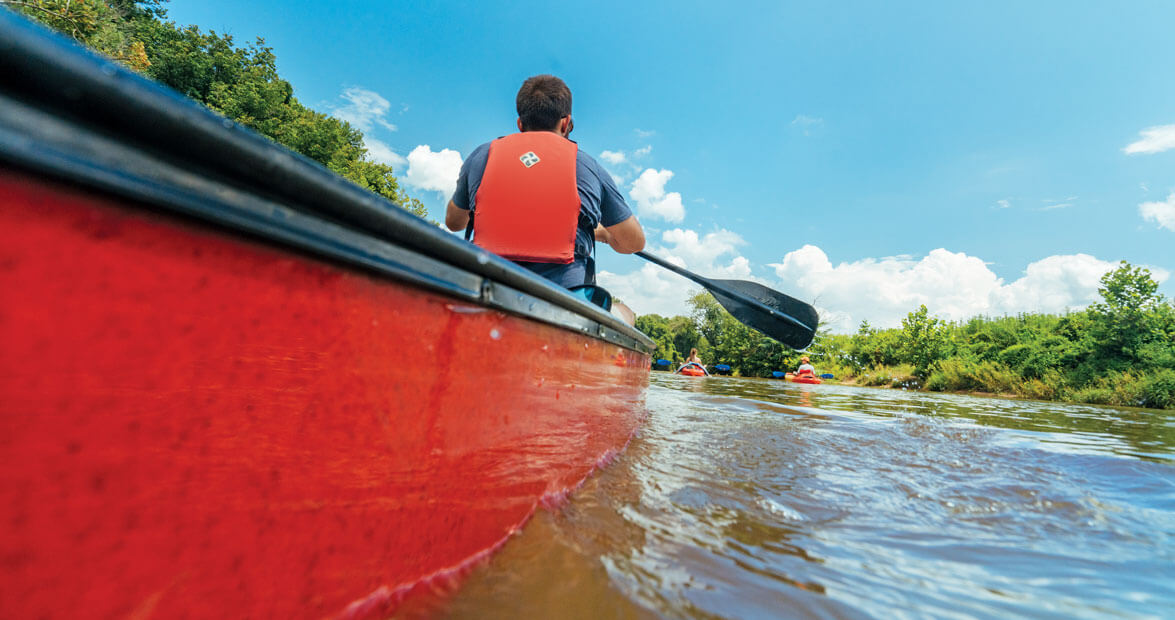 “Don’t grab on to the tree branches,” Brian Fannon calls out cheerfully, “or you might get a snake in your boat.”

Then, with a dip of his paddle, he glides past in a sleek blue kayak, a fishing hat placed on top of a mess of curly hair, the Yadkin River sweeping him along.

Brian is a riverkeeper. Actually, he’s the riverkeeper of the Yadkin Riverkeeper organization, a nonprofit based in Winston-Salem that works to protect the Yadkin River by improving water quality, promoting a clean and healthy river, and teaching “river ethics.” Brian, a Boone native, regularly goes out on the river to check up on water quality and conditions — but he also encourages people to appreciate, fish, paddle, and play in its waters the way he does.

And, sometimes, he offers warnings. Today, in addition to flying tree snakes, he’s also informed a group of paddlers of swift water near the put-in point — the result of recent rain — and thunderstorms that are threatening to pop up in the afternoon. But this trip, despite its possible hazards, has a grand finale that will make any obstacles worth it: wine.

Each summer, the Yadkin Riverkeeper hosts a series of tours along several different stretches of the river. After two or three hours on the water, paddlers reach a designated take-out point and catch a shuttle to a nearby winery for post-paddling rest and relaxation among the vines.

The river is part of the reward. One of the longest rivers in North Carolina, the Yadkin flows 203 miles from its headwaters near Blowing Rock before its name changes to Pee Dee near the South Carolina state line. Along the way, it drains city runoff and serves as the drinking supply for nearly a million people.

This paddle trip down the Yadkin River has a grand finale: wine.

As it winds its way through the Yadkin Valley west of Winston-Salem, it flows past dozens of wineries, too, including Carolina Heritage Vineyard and Winery, which is hosting today’s post-paddle celebration. Pat Colwell, the owner of Carolina Heritage — and a founding member of the Yadkin Riverkeeper — knows better than anyone the importance of protecting the river from pollution: “Clean water makes good wine,” she says. 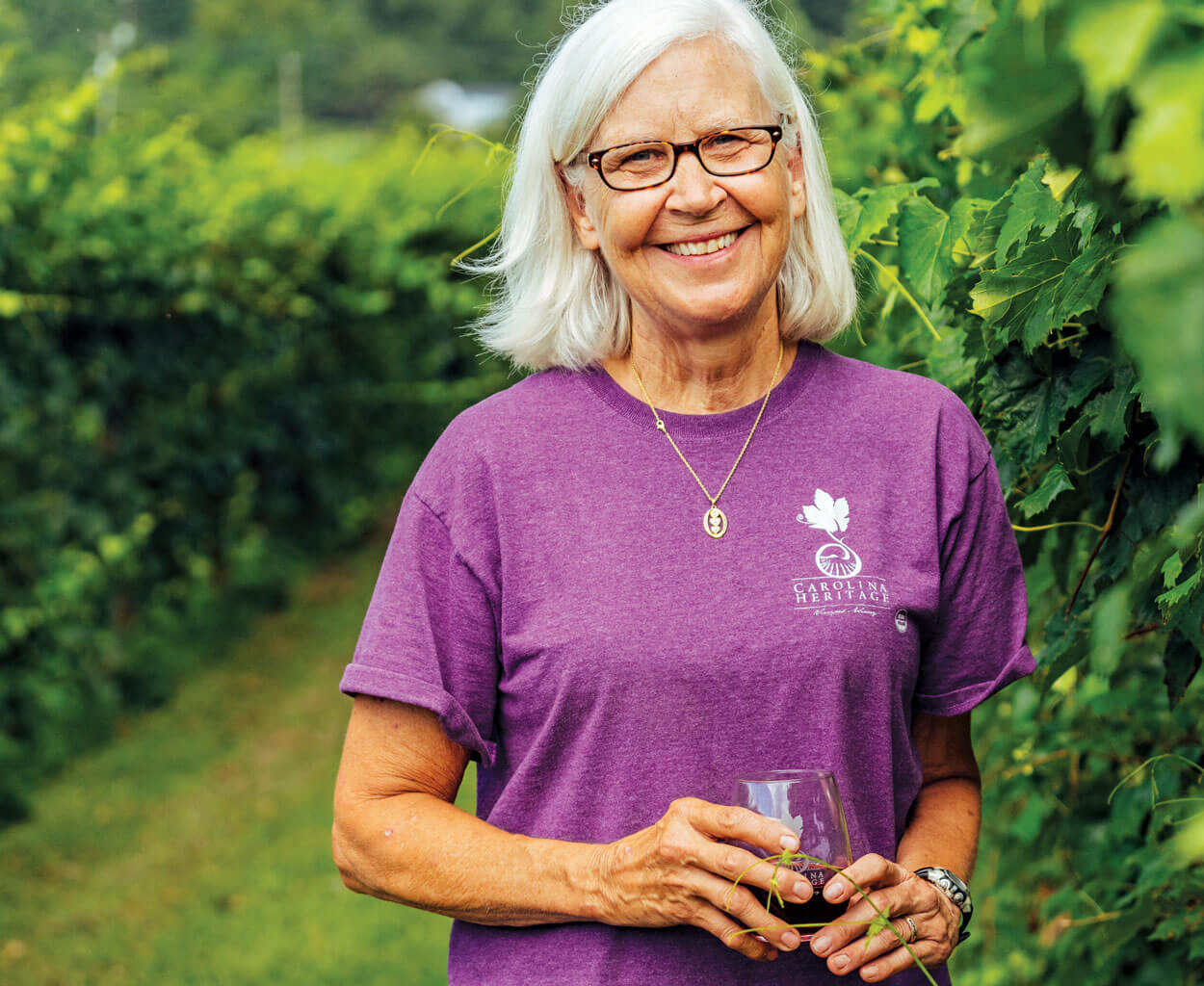 “After a couple of hours out on the river, it’s a nice reward to have a little party,” says Carolina Heritage owner Pat Colwell. photograph by Adam Mowery

It was nearly 15 years ago that Pat and her husband, Clyde, founded the state’s first completely organic vineyard and winery. Located in Elkin, in the rolling foothills of the Yadkin Valley American Viticultural Area, Carolina Heritage has a grassy lawn and tables with red umbrellas, where visitors sip in the shade while looking out at the vineyard. There’s even a glimpse of the mountains beyond. Like her visitors do today, Pat immediately fell in love with the beauty of the grape-growing region — and the river at the heart of it.

“Our vineyard property goes right up to the edge of the water, and when I would talk to people from around here about the river, about how beautiful it is, they just didn’t really care. I couldn’t understand why,” Pat says.

Several years after the Colwells founded Carolina Heritage, a member of the environmental nonprofit Waterkeeper Alliance came to Elkin to encourage protection of the Yadkin — and Pat listened closely. In 2008, she helped launch a new chapter: the Yadkin Riverkeeper.

“My dad always used to say, ‘In your lifetime, Pat, it will be all about the water.’ At the time, I never really understood what he meant. But he was right,” Pat says. “Soon, we started holding paddling events on the river, and the people who live here began to think of the river differently. It wasn’t just a place you threw old farm equipment. It was a free, healthy resource. It was somewhere you could have fun.” 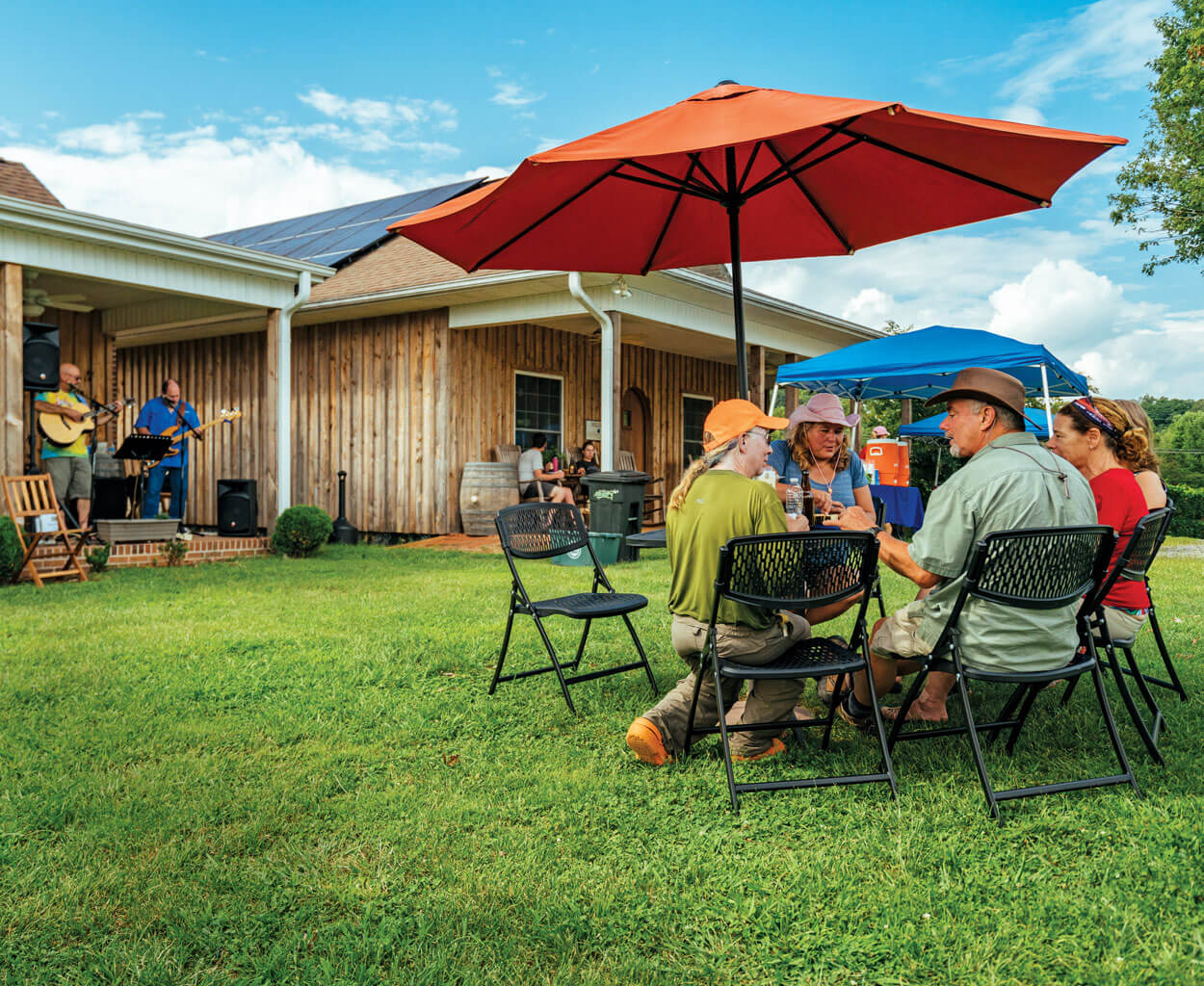 Eleven years later, the Yadkin Riverkeeper is still working tirelessly to protect the river. To encourage people to boat and fish and play in its waters, and, in the summer, to celebrate a day spent out on the river with a glass of wine and some bluegrass music.

For Pat, protecting — and celebrating — the river has come full circle. “There are very few things you get to see through a whole cycle,” she says. “We plant the grapes, they grow, we harvest them. We’ve watched the Yadkin change, too. Now we see trucks loaded with kayaks — it’s so rewarding. I think the paddles fundamentally changed the way people view the river,” she says. “It’s amazing how much we take care of the things we believe are ours.”

Out on the water, Brian takes a close look at a riverbank, then turns his kayak to keep an eye on paddlers upstream. “I see the water differently now,” he says. “I see things I never noticed before. It’s an appreciation for the water.” And the run-ins with the river’s resident reptiles? He pauses, then grins. “I’ve learned to expect things to fall into my boat.”