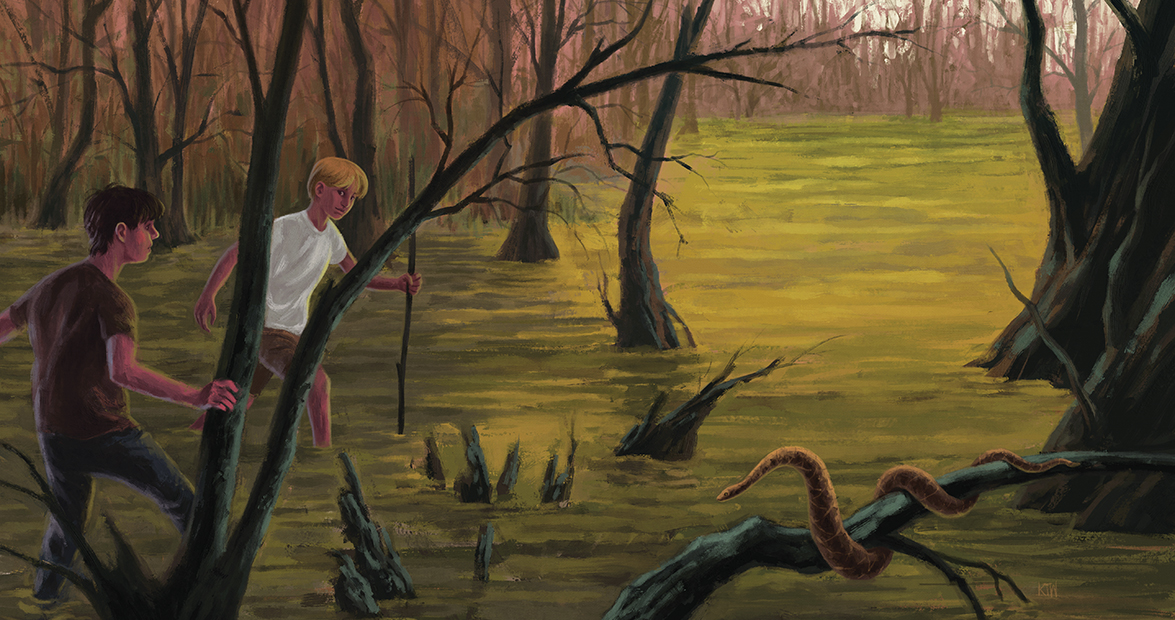 To get to the Little Coharie Swamp from our house out on Five Bridges Road in Clinton was easy: Walk down the drive and cross the highway, which was nearly always traffic-free save for an occasional sputtering pickup, school buses in early morning or late afternoon, or, during summer, a combine taking up three-quarters of the pavement. We lived in the country, across from a sizable tobacco field, and in summer, the tractors moved slowly up and down the rows, pulling trailers upon which women sat high above the freshly cropped stalks, tying leaves to sticks with the dexterity of spiders spinning webs.

The field curved down to a line of trees. The shadowy space between tree root and lowest limb resembled, from a distance, a dark mouth. Secrets and adventure flourished in those dark-mouthed woods, the most alluring of which wasn’t the forest but the swamp that began a few hundred feet from the forest line. The swamp wasn’t really a secret. Everyone knew it was there. The first of the five bridges on Five Bridges Road crosses the Little Coharie Creek, which spreads visibly for acres. The road, suddenly shoulderless, has guardrails in place to warn motorists to stay on the pavement.

Many a back road across the state could well be called a causeway, so high does the road rise above the terra infirma alongside it. But swamps, even when visible, are mysterious. Even when you’re just looking at one — hell, even when you’re splashing through it — your footing is unsure; you’re always on the lookout. Swamps are unsettling. Although I have found them to be preternaturally peaceful, possessing a kind of calm that I’ve not experienced in any other ecosystem in the state, that serenity comes at a cost. Not to knock the drive up to the top of Mount Mitchell to take in the stunning view on a clear summer day, but in my mind, rewards in nature are generally proportional to the difficulties suffered experiencing their appeal. By this measure, our many (and varied) swamps might be the most beautiful places in the state.

The preponderance of swampland in eastern North Carolina, according to an entry on the subject on the website ncpedia.org, gave rise to “considerable negative reputation for the coastal plain and sound country as being wet, wild, impenetrable, interminable, and monotonous, if not downright terrifying.” Swamps provided refuge to runaway slaves and Civil War deserters, and bootleggers during (and after) Prohibition. Not to mention the dangers posed by intolerable heat and humidity, swarming insects of several varieties (mosquitoes the size of hummingbirds being the most prevalent and worrisome), and, of course, snakes: water moccasins, coral snakes, rattlers. Our Little Coharie was too far inland to harbor alligators, though when what looks solid turns out, with the tentative tap of a toe, to be liquid, every half-submerged log or cypress knee poking from the cola-colored waters of the Coharie resembles a gator waiting around for lunch.

To trust in something I could not see felt impossible in a place where what is visible is either deceptive or so repetitive as to be indistinguishable.

Which would have been me and my two partners in adventure that day back in the mid-’70s when we decided to explore the swamp and ended up lost in it. If I could, I would call up Sam and Termite and ask them what we thought we were doing that day, traipsing around in the swamp, but both, sadly, tragically, have since died. I can only think that we were doing the same thing we did when we weren’t lost in swamps back in those days in the mid-’70s: wandering around without much of a plan, killing time, looking for adventure and excitement.

What I do recall is panic: “Wet, wild, impenetrable, interminable and monotonous, if not downright terrifying.” The first two adjectives were not only obvious, they were decidedly not deterrents. Impenetrable? We penetrated it; ergo, it was not impenetrable. I’d never thought of a swamp as interminable because I had only prowled the edges of one, or driven alongside it on the way to, well, almost anywhere in eastern North Carolina. (And other parts of the state, as well — there’s a good-size swamp just outside of Chapel Hill, and I know of at least a couple in the High Country of Yancey County.) But as we tried to find our way out of the swamp that afternoon, it certainly seemed to go on for hours. Monotonous? I was too terrified to be bored, even though it is true that, to the untrained eye, there’s not a lot of variety to a swamp. It takes some effort and knowledge to recognize and fully appreciate the variety of vegetation — of fern and cane, cypress and pine, oak and gum, of the dozens of flowers and grasses — that proliferates in swampland. That day, the swamp seemed two-toned: brackish water darkened by the tannic acid of cypress trees and peat, and the green of vegetation lush enough to bring to mind the word jungle.

The source of my terror was, curiously, addressed by one of the few phrases I had remembered from my time in Sunday school: Faith, I recall hearing, requires the believer to have confidence in things unseen. It’s difficult, in the Little Coharie or in any swamp, to see much of anything. There’s no seeing what’s beneath your feet, for even what appears to be solid ground sinks and squishes when you put your weight on it. Certainly there’s no seeing ahead of you, for the vegetation is too dense to afford much in the way of a vista. To trust in something I could not see — in this case, our survival — felt impossible in a place where what is visible is either deceptive or so repetitive as to be indistinguishable.

It was dusk — six or seven hours since we’d entered the swamp — when we stumbled onto the back nine of the Coharie Country Club, our jeans wet to the knees and our arms and faces covered with bug bites. I remember taking note of the juxtaposition between the untamed swamp and the groomed fairways of the golf course — the pinnacle of success and development in our small town. The swamp, it turned out, abutted the priciest real estate. It never occurred to me then how much of the swampland in the state was being drained to create expensive real estate or fertile farmland. The term “wetlands” wasn’t in wide use in the ’70s, and we didn’t know then how precious to the environment were those boggy marshes, which most of us looked beyond and certainly never bothered to explore.

I wish I could say that knowing — or fully appreciating — how ecologically vital and threatened our eastern swamps are has increased my admiration. But what most attracts me, then and now, to the Little Coharie, and to all swamps, is its ambiguity. A swamp, by nature, is a place between places: neither land nor water, not a forest or a river. The swamp is forever unknowable and — more important — indefinable. It’s no accident that North Carolina’s most prominent folk hero, Henry Berry Lowry, hid from the authorities in the swamps of Robeson County. Lowry, our Lumbee Robin Hood, has been cast as both hero and villain, but in all likelihood he was — like the marshy terrain he inhabited — both a danger and a redeemer.