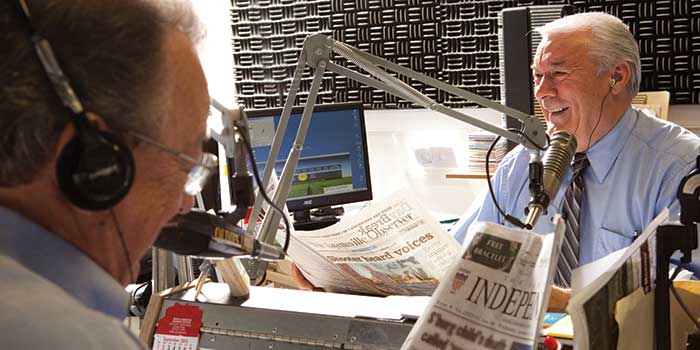 Dixon then sits down with station announcer Nolan “Z” Wiggins and businessman Lyman “L-Man” Horne, and for an unscripted, tongue-in-cheek hour, the Over the Hill Gang talks things over. The men comment on the news, celebrate community milestones, and shout to folks who pass by the studio’s big window on the courthouse square in downtown Clinton. They launch faux-curmudgeonly criticisms at one another and crack wise about themselves.

On a recent morning, L-Man is away on business, and Grandpa Pat implies that his friend will go broke for missing the show. (In truth, L-Man is not even a station employee. He’s general manager of the area’s telephone and cable cooperative, which simulcasts the show countywide. One listener calls in regularly to tell the gang they’ve forgotten, again, to switch on the TV cameras.)

“Lyman is out somewhere,” Grandpa Pat tells listeners. “I’m not sure where. He took a plane.”

In the middle of his thought, a woman rides by on her bicycle and waves.

“Hey!” Grandpa Pat shouts into the microphone. “That’s the judge’s wife. Lyman says the judge told him that he never starts his day unless he listens to us for the wisdom that sometimes we’ll convey to him in making decisions of importance. Ain’t that what he said?”

“But don’t you know,” Grandpa Pat says, “a lady called us one morning and said, ‘I want to know where y’all went to school.’ ”

“She didn’t believe that we’d been to school,” Nolan Z says.

Now in its 14th year, the show includes news tidbits from the morning paper, phone calls from listeners, fast-food giveaways, and the occasional hit song from 30 years ago. And the gang loves to muse about life as seen through the station’s picture window — they give raves to Clinton’s garbage collectors, warn about the sour mood of the downtown parking officer, and suggest more elbow grease on the courthouse windows.

“We used to make so much fun of the lawyers coming in and out of the courthouse that they started going in the other door,” Nolan Z says.

The show has no formal introduction or sign-off. They rehearse nothing and plan little.

“Too much preparation makes it drag,” Nolan Z says.

“You could make mistakes,” Grandpa Pat adds. “The way we do it, we don’t make any.”

The show’s lone goal is to kick off listeners’ mornings with a smile.

The Morning Show
WCLN1170 AM

Tim Bass, a Clinton native, teaches creative writing at the University of North Carolina Wilmington. His most recent story for Our State was “Wilmington’s Soul Food” (July 2013).