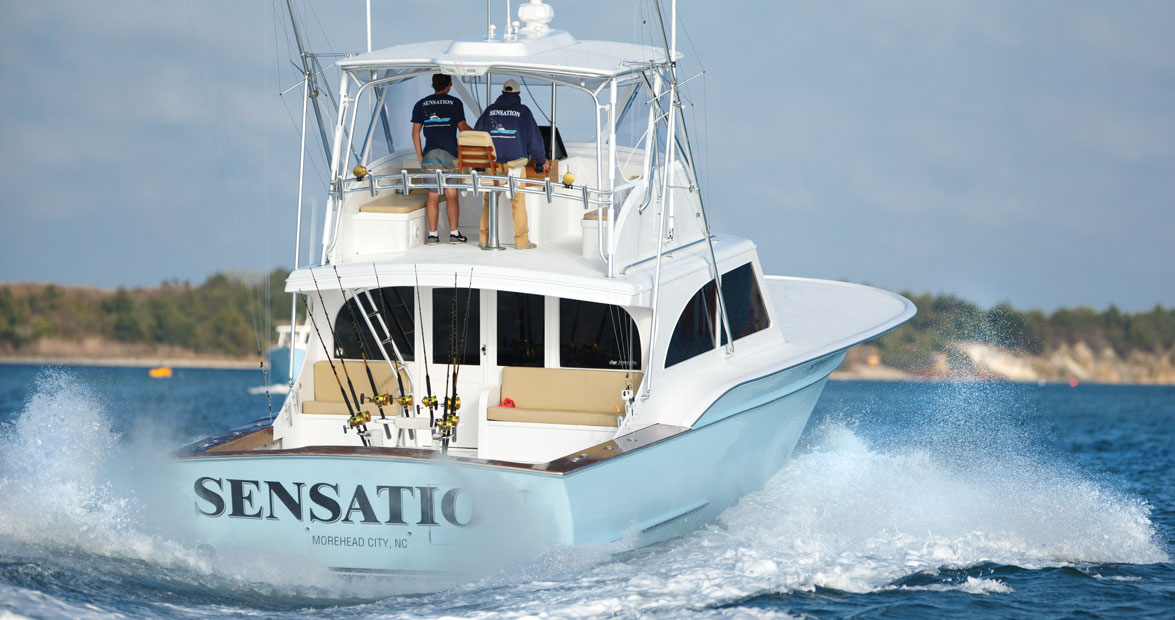 “On the teaser! On the teaser!” Capt. Dale Britt shouts from the bridge, jolting us from a lull on the boat’s rear deck.

“A fish on the teaser! Now another one on top! Get that squid chain out of the water!”

Patrick Dufour, mate on the charter boat Sensation, leaps into action. The teaser is a chain of large black plastic squid, rigged without hooks, churning through the Gulf Stream 30 feet behind the boat. I see the fish, opalescent flashes of midnight blue and emerald, drawn to the skittering squid. A rod bends double, then another one. This is how it happens out here in the Gulf Stream, 45 miles from firm ground: One minute, you’re drinking a breakfast beer with your pals. The next, you’re in the saltwater-fishing version of a three-ring circus.

But let’s take a break from the action for a moment, because this isn’t just a fishing story. Anyone who’s spent much time on the North Carolina coast knows that deep-sea fishing braids together history and local culture like few other pursuits. Early this morning, before I even stepped foot on the Sensation, before we pulled away from the Morehead City waterfront, before we lost the horizon to the deep-blue sea, I could see and smell and feel it all. The rumble of the big diesels that you can sense in the soles of your feet. The flash of a flying fish skipping across the waves. It was oh-dark-thirty when I parked across from the charter boat fleet on Evans Street, between the famed Sanitary Fish Market and the landing docks for the Big Rock Blue Marlin Tournament. The sportfishing boats were lined up like pastel bullets in a bandolier, bows pointed toward open water, ready to launch. Lights were on in the cabins, in the towers. The air crackled with expectancy. 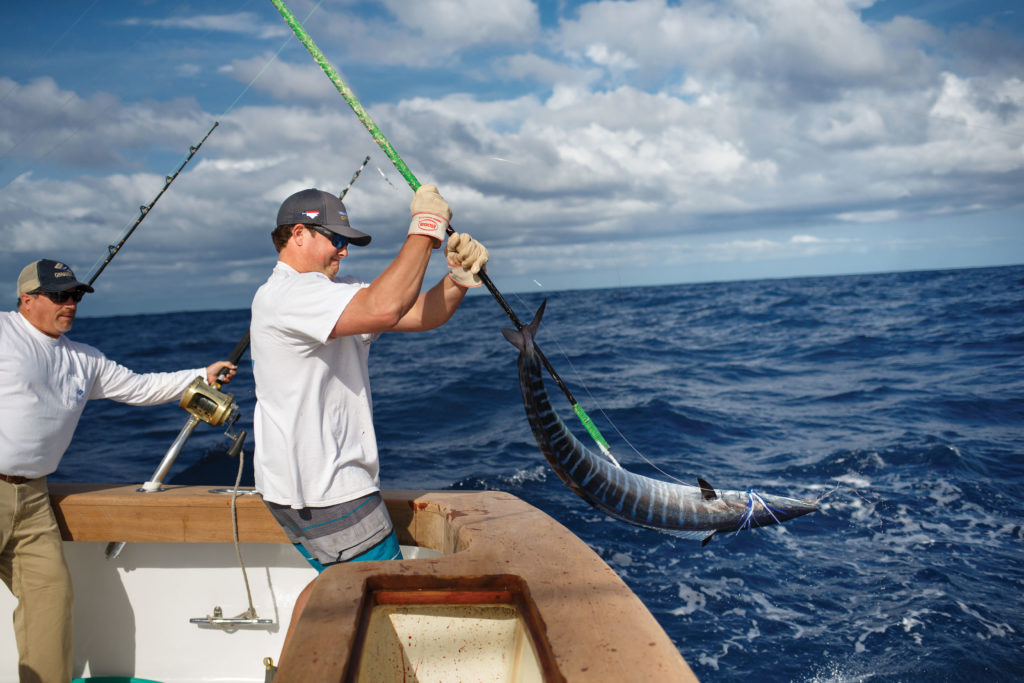 A wahoo puts up a fight, but the fish is no match for the gaffing hook wielded by Eli Blake, a member of Captain Britt’s crew. photograph by Jerry Wolford & Scott Muthersbaugh

In all the fishing realm, there aren’t many dreams bigger than those found on the early-morning docks of a big-game fishing fleet. That’s partly due to the nature of the beasts. Marlin, wahoo, tuna, and sailfish ply the warm Gulf Stream waters, and that great oceanic current requires a two-hour — or longer — run from the Carolina shore. But it has a lot to do, as well, with the weight of history and the deep heritage of blue-water fishing, North Carolina style. Even folks who have no interest in fishing can’t help but be caught up in the allure of all those acres of gleaming fiberglass on the waterfront, by the sunburned captains and mates, by the throngs waiting at the docks to watch the catch pile up, and the flashing knives as the fish-cleaners do their work.

So this is a fishing story, no getting around that. Wedged in the Sensation’s fighting chair, I crank the big Penn International reel, pumping the rod up and down, hauling in whatever it is on the end of the line that has no interest in a face-to-face meeting. The fish surfaces just enough for Britt to get a positive ID. “Tuna,” he calls out.

When I bring my fish close, Dufour gaffs it cleanly and hauls it into the fishbox. My shoulders tremble, gearing down from the fight. I take a couple of deep breaths, my eyes on the ocean surface that unfurls behind the Sensation. But there’s little time for reverie.

Few fishing craft sail with the heritage of this one. Launched in 1986 (and since restored and repowered), the 53-foot Sensation was the very first hull built by the legendary Jarrett Bay Boatworks of Carteret County. It carries the classic lines of a custom Carolina-built sportfishing boat: the exaggerated Carolina bow flare, the knife-edge deep-V entry. Jarrett Bay has grown from its humble beginnings to have a reputation as a revered boatbuilder, and “Hull No. 1,” as the Sensation is sometimes called, bridges nearly 30 years of Carolina history.

We catch three more tuna before the action dies down, so Britt moves us a few miles away, where the water temperature has ticked up four degrees. “Fish don’t like to cross into cooler water,” Dufour explains. “They get pushed up against that wall, and that’s right where we want to be.”

Indeed, despite what passes as a featureless plain, the ocean here is a constantly changing matrix, especially in the Gulf Stream. Britt’s task is to make sense of a jigsaw puzzle of water depth, tidal currents, wind speed and direction, air pressure, water temperature, water clarity, and bottom contours.

Today, he has the recipe dialed in. A 50-pound wahoo is gaffed in over the transom, four feet of sharp teeth and tiger stripes. Fifteen minutes later, another wahoo. More tuna. By the time we pull the lines, we have a mother lode of blue-water fish in the box: nine yellowfin tuna, a pair of wahoo, and a bonus dolphinfish that’s destined for epic mahi-mahi fish tacos. I climb the bridge to chat with Britt on the ride back to port. The man loves fishing like few others. He will pound the Gulf Stream for six long days in a row, and then, on some of his days off, he’ll walk out on the Oceanana Pier with a light rod and a cooler of shrimp to hang out with folks jerking spot and mullet from the breakers. Coming through Beaufort Inlet, with Shackleford Banks to starboard and Fort Macon to port, he chats on the radio with a few other captains about the catch, the weather, and the prospects, always, for the next day at sea.

“There’s still something magical about it all,” he tells me. “I’ll back this big ol’ boat into the slip on the waterfront, and there might be 80 or 100 people crowded all around, waiting to see what we’re coming in with. There are couples and families and kids running around, wild-eyed at some big ol’ dolphin I’ll hold up for them to kiss. There’s nothing else like it.”

Back on the waterfront, Dufour pulls out the haul, and lays 350 pounds of the best the Gulf Stream has to offer on the dock. It’s mid-week in the off-season, so there are no crowds to greet us, no kids to kiss the fish. But I can still feel the gaze of history. Britt buttons up the boat and comes down to slap our backs and relive the day, a steward as much as a captain, a keeper of a certain kind of beacon, one that draws folks to that place beyond the Carolina shore where the ocean gives way to the sky.