Inside Oak Island Restaurant, along with the usual beachy decorations — the sea turtles swimming along one wall, the clipper ship pictures and pastel beach scenes — there are 16 antique clocks. Nine of them — short ones with pendulums that look like grandfather clocks cut off at the knees — hang on one wall. A ship with a clock in the hull sails over one booth, two barometer/clock combinations are tucked into a cabinet, and a round clock from a high school gym hangs over the cashier’s counter.

All of them are set to different times. The closest to accuracy, the gym clock, is 10 minutes slow. It doesn’t matter: Regulars know the schedule by the menu. The Wednesday special is shrimp. Thursday is Chicken & Dumplings Day. Friday is their famous fried flounder — a fine version, with a golden crust on one side and fluffy white fish bursting out with the flick of a fork. 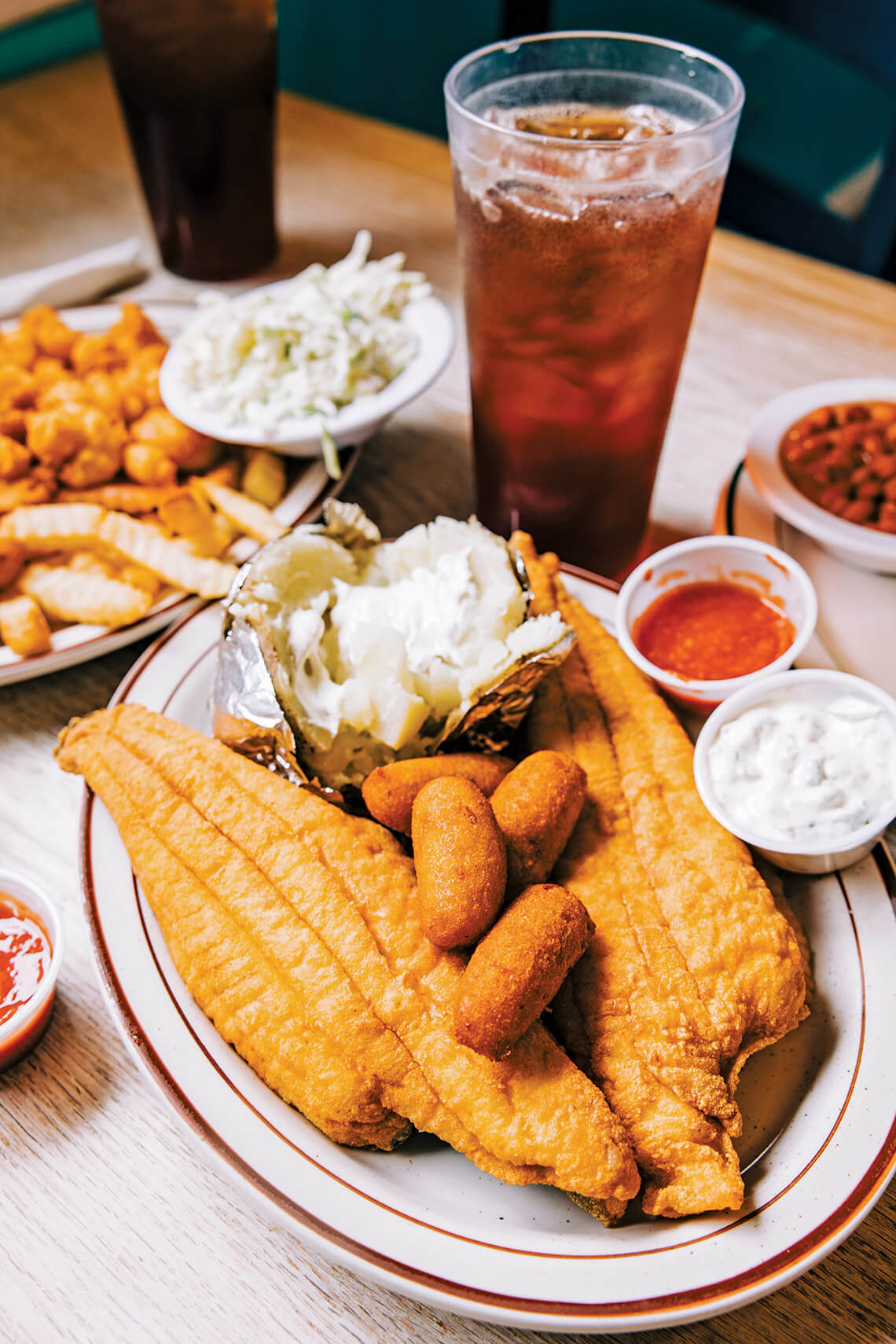 Dave Sigmon, the late founder of Oak Island Restaurant, loved to chat with his customers and serve up scratch-made meals, like fried flounder photograph by Matt Ray Photography

The restaurant’s late owner, Dave Sigmon, a Navy veteran who served in the 1950s, collected clocks. Even after he left ships and their schedules behind, he used to get up at 4 every morning so he could be at the restaurant by 5:30 to start breakfast and prep for the day. His wife, Mary, just laughs when you ask about the clocks. “I’ve got even more at home,” she says.

Dave died at 88 in October 2020, from Alzheimer’s. He worked until he was 86, when he fell during Hurricane Florence. He was hospitalized for weeks and was never able to return to work afterward. Mary and their daughter, Melissa, carried on through all that. And now, they’re carrying on without Dave. “This restaurant was his passion,” Mary says. Even when he couldn’t do kitchen work any longer, he still came in every day until 2018, sitting in a corner booth to roll silverware in paper napkins and greet his friends.

The restaurant came as a surprise to Mary, actually. Dave had been a contractor for years, building hundreds of houses on the island. “In 2000, he told me he bought me a restaurant,” she remembers. “I said, ‘Do you even know how to cook?’” It turned out that he did: He had learned as a ship’s cook in the Navy, years before.

When the Sigmons opened the first Oak Island Restaurant, Dave set the menu and the rules: Nothing fried in advance and kept warm under heat lamps. Everything made from scratch, even the lemony tartar sauce. “Everything he knew, he taught me,” Mary says. “I was surprised how well he could cook.” But what really made the restaurant go, she says, was his personality. “Everybody called it ‘Dave’s Place.’ He never met a stranger. He was a people person.” 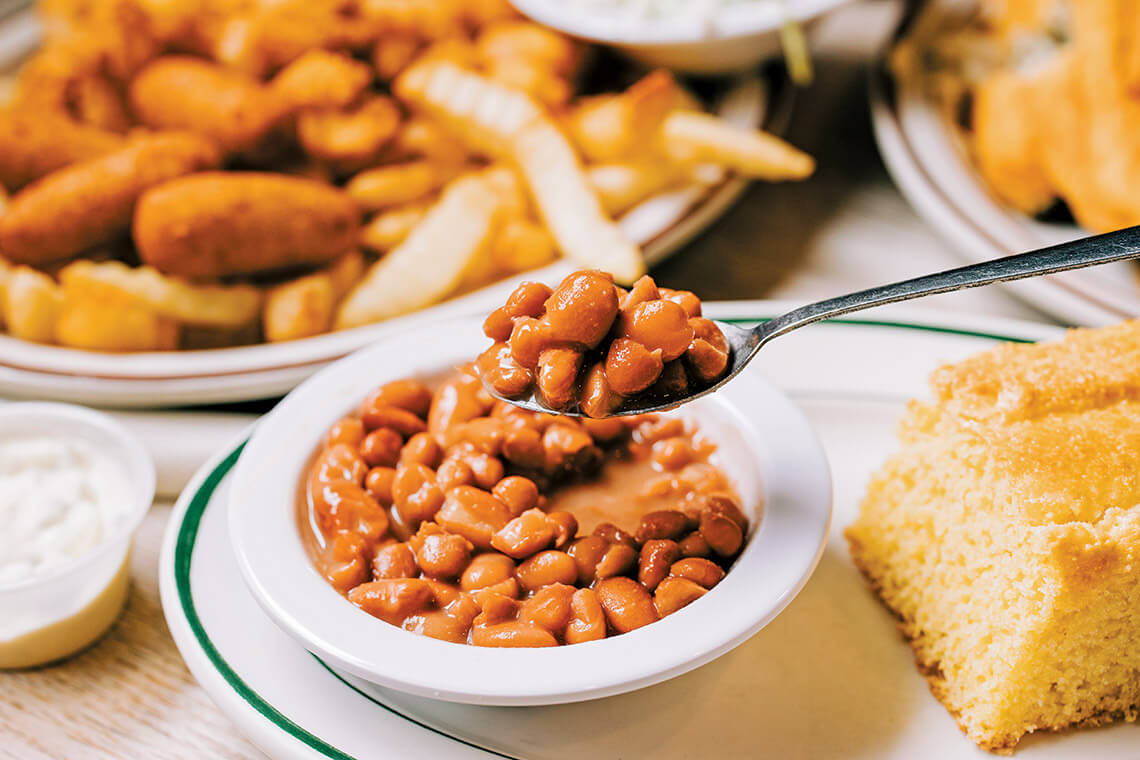 Pinto beans and cornbread are among the comforting classics on the menu at Oak Island Restaurant. photograph by Matt Ray Photography

The Sigmons sold the first location, on 55th Street, because Dave wanted to move to the mountains. But Mary’s mother got sick, and they decided to stay. In 2007 — just before the 2008 financial crash — they bought the current location, a former deli. But they kept the menu the same: a mashup of seafood — like shrimp, scallops, oysters, and their specialty, fried flounder — along with a Southern-style “meat-and-two” menu of country-fried steak, chicken, and hamburger steak, with a list of vegetables. The pinto beans (with or without onions) are so popular that the Sigmons sell them by the bowl.

Melissa and her brother Shannon Walker both grew up in the restaurant. Shannon is now a homicide detective in Wilmington, but he still comes back to help. Melissa got her degree in early childhood education and was beginning her own career in Wilmington when the blows started coming: Hurricane Florence in 2018, her father’s decline, and the closing of the G.V. Barbee Bridge, the main link to nearby Southport, for six months. And then came 2020 and the pandemic, followed by Dave’s death in the fall.

The Sigmons have cut down on the number of tables and started a busy takeout service. The hours have changed several times while the family figured out what worked. Shannon even sanded the tops of the wooden tables to keep sanitizers from making the varnish sticky. Meanwhile, his 1-year-old son, Finn, has been spending a lot of his days at the restaurant, sleeping and playing in the office.

“We’re planning to stick with it,” Mary says. “We have another generation ahead.”