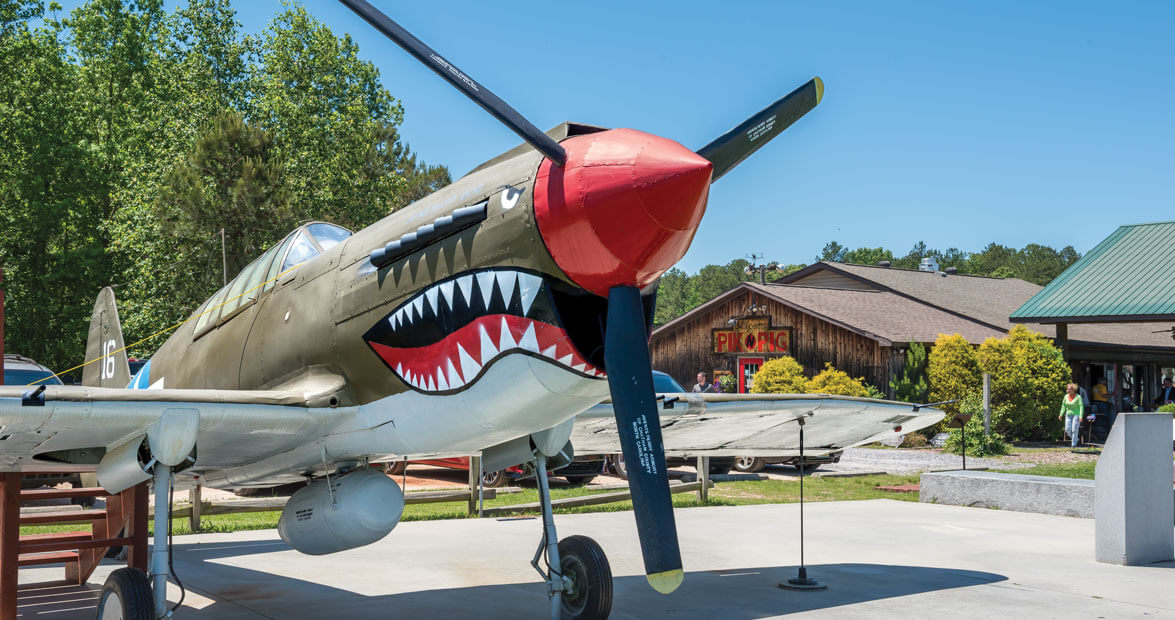 At the edge of the back lawn of The Pik-N-Pig barbecue restaurant a mile southwest of Carthage — 50 feet or so beyond the covered patio full of picnic tables — a stop sign on a red post is hammered into the ground. It reads:

There’s no fence, just a narrow taxiway and then a runway that begins abruptly to the southeast, where a canopy of pine trees gives way to a clearing about half a mile long. The runway disappears into the downslope northwest, beyond which rises a wooded vista.

It’s a strange and wonderful place, a fly-in restaurant, an unlikely melding of two legacies. It’s a cool day, so my wife and I settle into a window seat inside. A certificate above our table testifies that The Pik-N-Pig serves “True ’Cue,” cooked in an outdoor smoker fueled by hickory.

Jill enjoys the pork ’cue and I chow down on the beef brisket, and we watch the runway, hoping to see a plane appear out of the overcast sky. It’s a busy little airport, built and owned by Roland Gilliam and his wife, Nancy, home to about 22 aircraft — including Gilliam’s own vintage biplanes. There’s no control tower, just two windsocks and a radio. On the far side of the runway stretches a line of hangars, utility sheds, and other buildings. On warm, clear days, the airfield buzzes with planes landing or taking off — as many as 64 in a single day — some of them carrying golfers to nearby Pinehurst and Southern Pines.

Inside the restaurant hang model and toy planes, including one made of empty Busch beer cans. Aviation-themed posters and photographs adorn the walls. But the airfield outside the window is the star of the show.

Even on a quiet Sunday, the runway calls up a vision of how airports used to look: level spaces carved out of woods and fields. Pilots and mechanics coming and going without a lot of fussy security, in a camaraderie of shared enthusiasm for aircraft. The effect is reinforced by the sight of a replica World War II P-40 Warhawk fighter plane — Junkyard Dog — olive drab, with a snarling cartoon dog painted on its tail, and its engine cowling painted in a face with sharp teeth.

The airfield harks back to an era when flying was a dangerous novelty and aircraft were first turned into war machines. It’s partly named for James Rogers McConnell, who won the Croix de Guerre — a French military decoration — in 1915 for bravery in saving wounded under fire. He volunteered as one of the original flyers in the Lafayette Escadrille and lasted just 10 months before being shot down by two German planes in March 1917, five days after his 30th birthday. A granite-and-bronze monument that stands next to the runway was sent by the French government to McConnell’s home county — Moore — shortly after his death.

In downtown Carthage, on the long brick sidewall of Dunk’s Gym along NC Highway 24, looms a giant mural featuring Nieuport fighters wheeling through the skies in action over France, and a portrait of McConnell — smiling, cap tilted rakishly, arms casually held behind his back, as if pretending his lethal profession is mere sport. Just a memory now, a mythical figure of daring and courage in the dangerous skies of another time.

Back at the airfield, the cook hoses out the barbecue cooker in a plume of aromatic steam, and the bright planes rest in their hangars, ready for flight.

Aviation enthusiasts have a name for any excuse to make a short round-trip flight, and the cost of gassing up the plane to do so: a “$100 hamburger.” Or, in North Carolina: a “$100 barbecue sandwich.” But you don’t have to be a pilot to pay a visit to The Pik-N-Pig, where an order of pulled pork comes with a view of the runway.