In 1989, Wes Stepp hitchhiked to the Outer Banks from Huntington, West Virginia, to be a fry cook. He had vacationed with his family in the area for years, and later spent summers working in various restaurants. He thought he’d cook until a “real job” came along. Turns out, cooking was the real job. “When I was a kid, some of my fondest memories were of my mom and my grandmother cooking,” he says. “There are a lot of emotions tied up in good food. I just loved it.”

Since then, Stepp has built a career as a chef in Duck, sharing his passion for food with hungry beachgoers. In 2002, he opened his first restaurant, Red Sky Cafe, where he serves traditional Southern food with a twist, like blackberry scallops. In 2018, he opened NC Coast Grill & Bar with a different approach: Dishes like the bulgogi steak wrap and tikka masala grilled cheese use local ingredients but are globally inspired. “I just love being a chef on the Outer Banks because not only do we have so much heritage in North Carolina and Southern food to draw from, but we also have so many influences from people from all over the country and the world who come here,” Stepp says. “That challenges us and pushes us forward.” 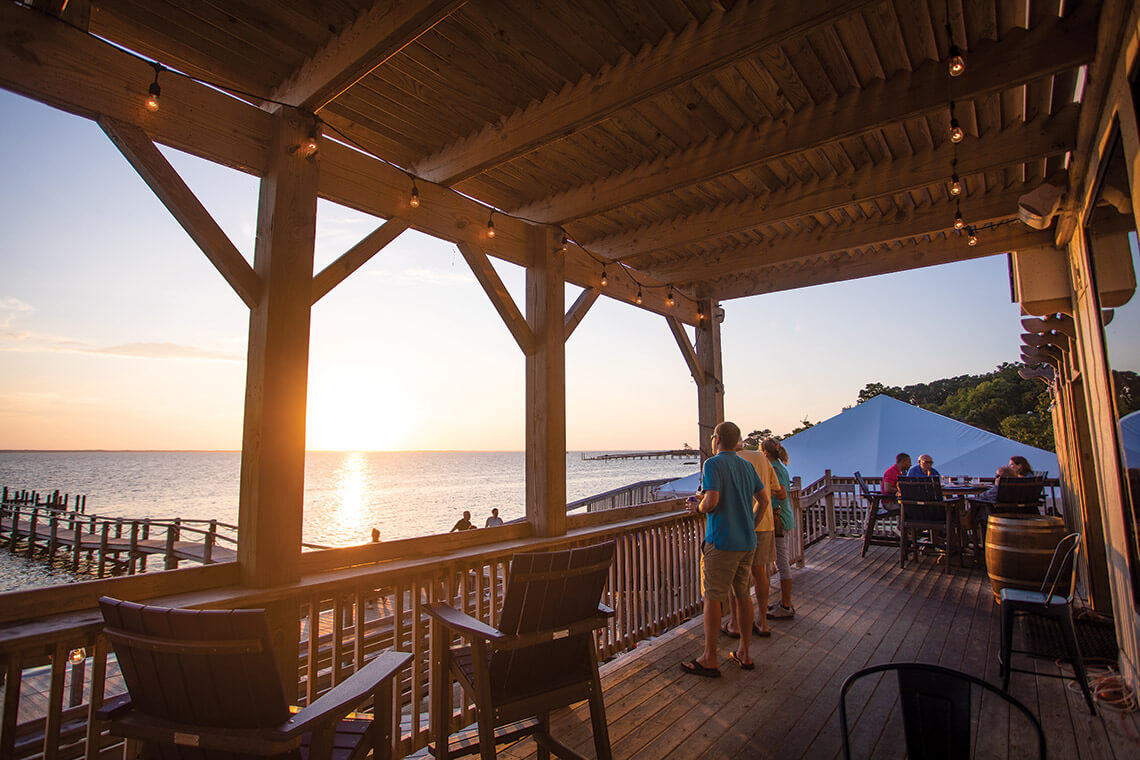 Take in the views of Currituck Sound from NC Coast Grill & Bar. photograph by Chris Hannant

The Roadside Bar & Grill. “If you’re walking down the block, you’re going to see this quaint little beach shack on the side of the road,” Stepp says. The Roadside restaurant has been open since 1995, serving up dishes like vegan pad Thai, clam chowder, and beef short ribs.

The Blue Point. “The Blue Point was the beginning of the restaurant business in Duck,” Stepp says. In 1989, owners Sam McGann and John Power combined their expertise in Southern coastal cuisine and fine-dining service to create what Stepp calls “a culinary anchor in Duck.”

Duck Donuts. There are more than 100 Duck Donuts locations across the country, but it all started on the Outer Banks in 2007. Their made-to-order doughnuts offer nearly two dozen customization options in practically endless combinations. “You can’t go wrong with fried bread and toppings,” Stepp says. 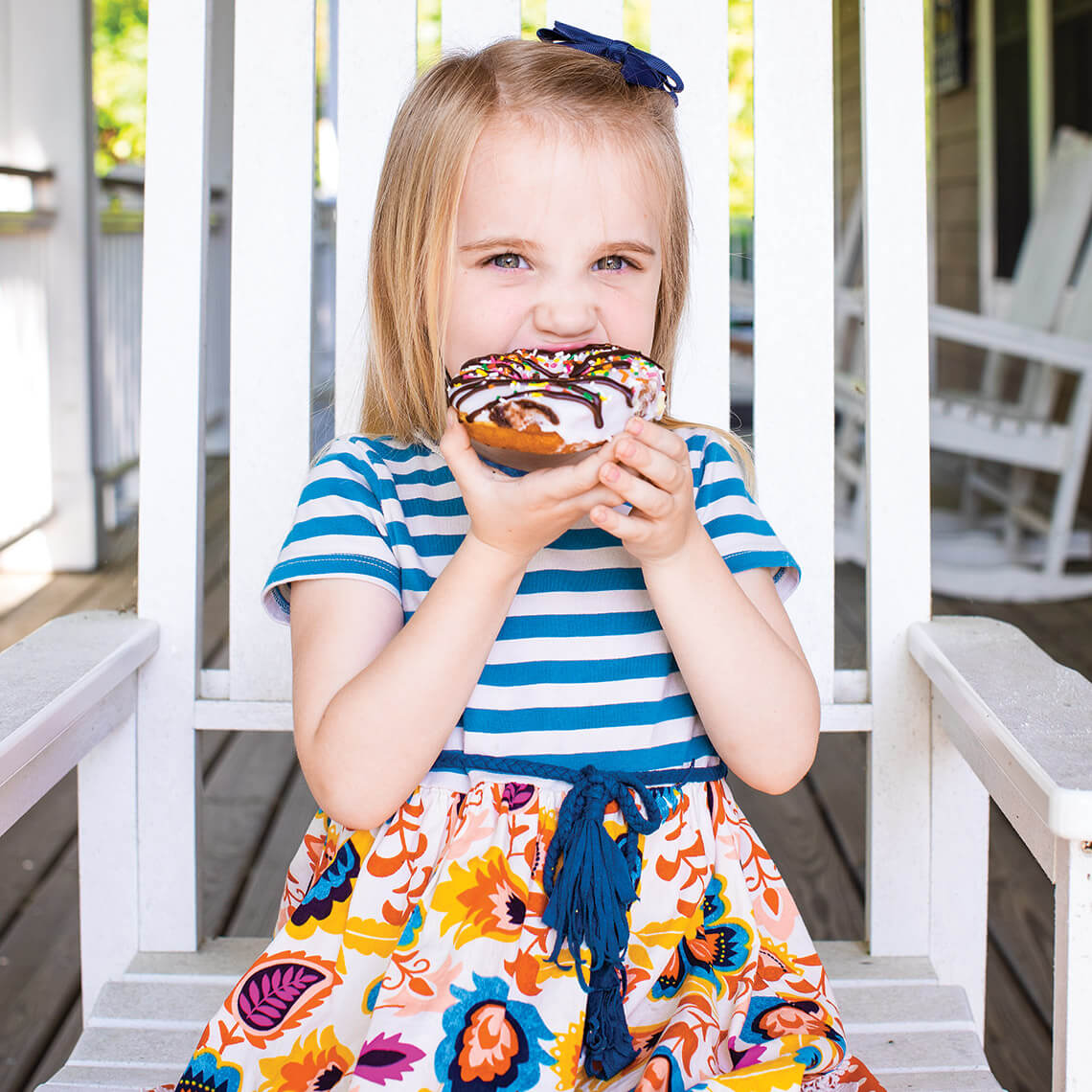 Eventide. “They’re doing some really creative and modern interpretations of panini-style sandwiches — more of a lighter touch to the food,” Stepp says. Located right off the Duck boardwalk, the restaurant is a great place to enjoy a glass of beer or wine outside while taking in a view of Currituck Sound.

Duck Deli. This third-generation family restaurant offers barbecue, subs, salads, seafood, and desserts made using passed-down recipes. “If you’re trying to feed the crew ribs, you go in, pick out [your food], and boom, it’s right out the back door,” Stepp says.

Tomato Shack. Stepp frequents this produce stand for ingredients like avocados and tomatoes to use in the specials at Red Sky Cafe, which is right next door. Owner Carlton Winslow “has been around fresh produce for a long, long time,” Stepp says. “He really knows it, and he knows where to get it.” 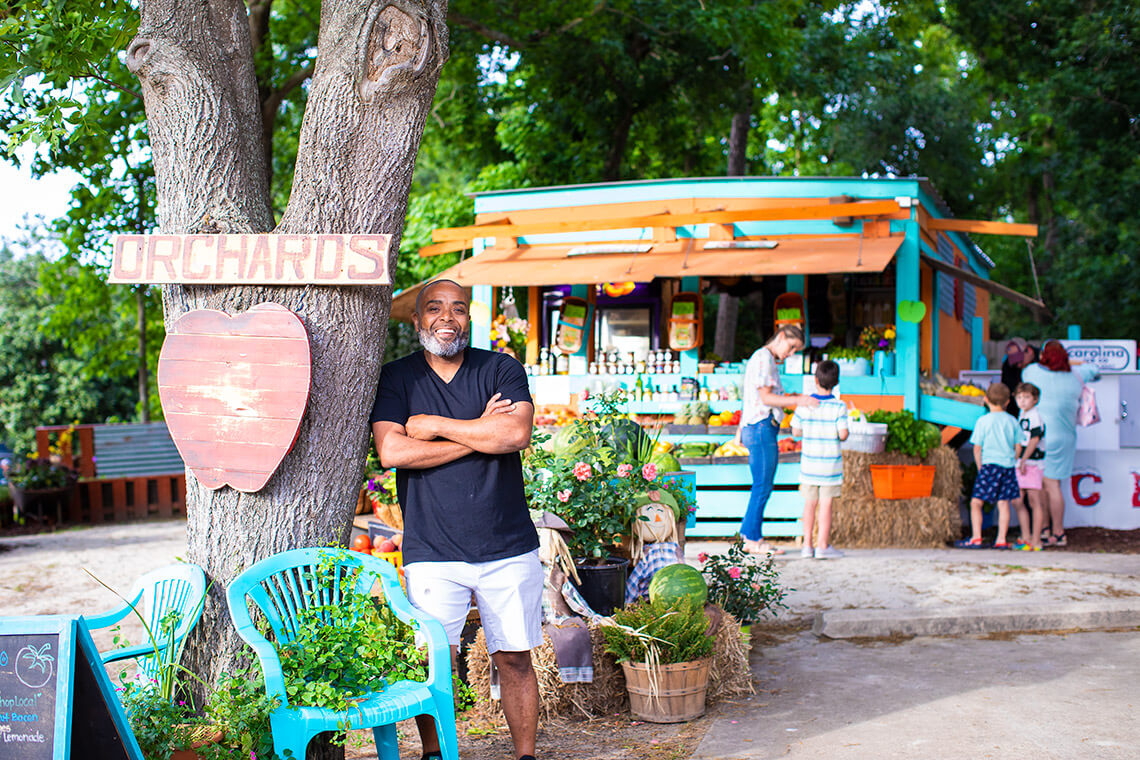 Tomato Shack owner Carlton Winslow will greet you with a smile. photograph by Chris Hannant

Tommy’s Natural Foods Market & Wine Shop. “Tommy’s market is a fixture down here on the Outer Banks,” Stepp says. The gourmet grocery store, which opened in 1987, has a butcher and seafood market, a deli, a bakery, and local wines and beers. “They also sell cigars,” Stepp says, “so you can finish your normal shopping and buy a great cigar.”

Dockside ’N Duck Seafood Market. This seafood market has been owned by a family of local commercial fishermen and farmers since it opened more than 30 years ago. “We go over there sometimes and pick up tuna or scallops that we’re going to be utilizing in specials, or if we’re running low on something,” Stepp says.

Treehouse Coffee Co. “[Owner Craig Readman] not only has top-notch coffee, but he also does an awesome job with biscuits — made-from-scratch biscuits with all different kinds of great fillings,” Stepp says. Plus, surrounded by trees, “the ambience of the place is cool as heck. It’s totally different from your beach vibe.” 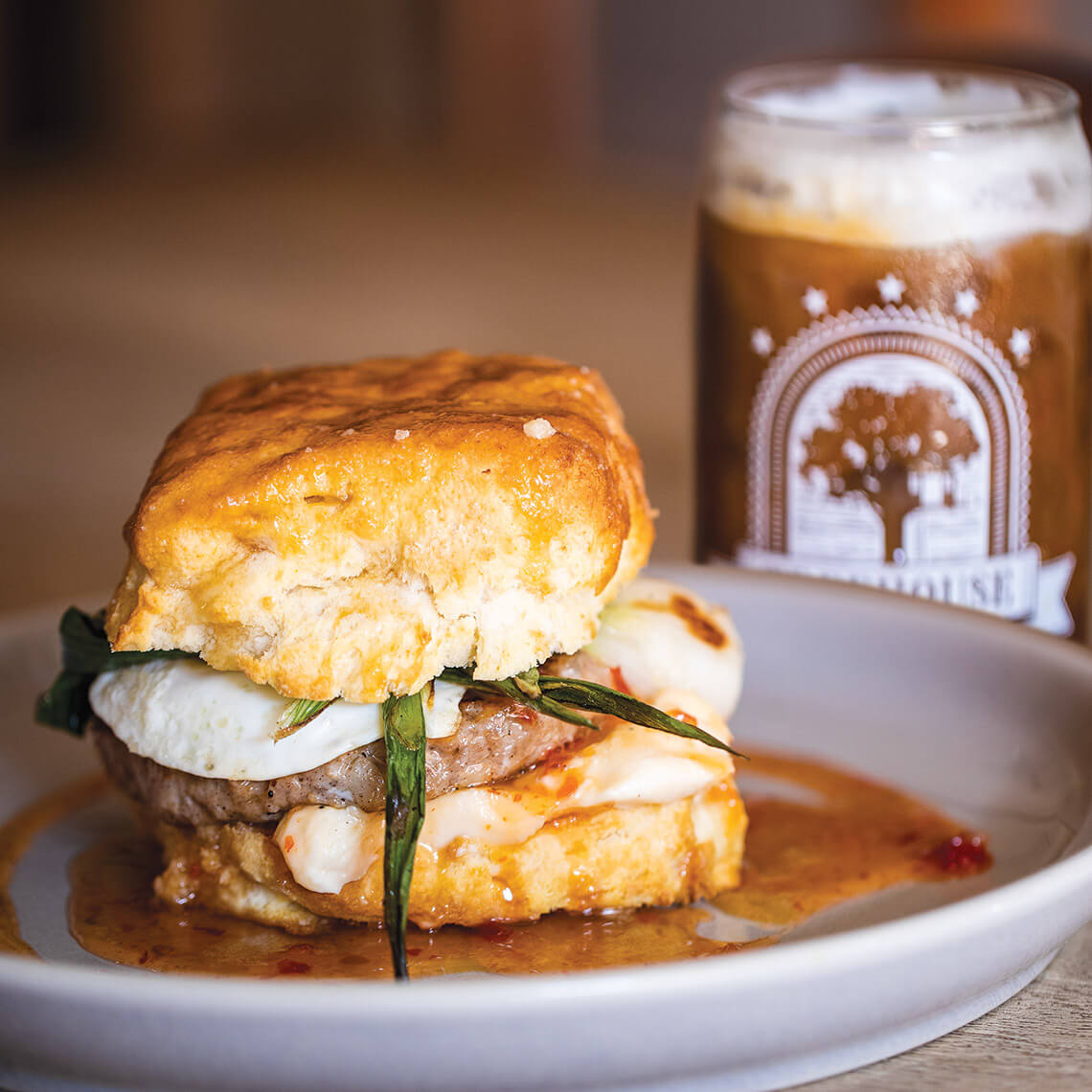 The Tap Shack. This casual outdoor bar behind Coastal Cravings restaurant “looks like a gas station,” Stepp says, “then, all of a sudden, it’s got this lively nightlife and music going in the back.” Visitors can play cornhole, Ping-Pong, or pool beneath the stars.

Duck’s Cottage Coffee & Books. This full-service coffee and book shop is housed in the old Powder Ridge Gun Club, a cottage built in 1921 for duck hunters. “It’s a step back into the past,” Stepp says. 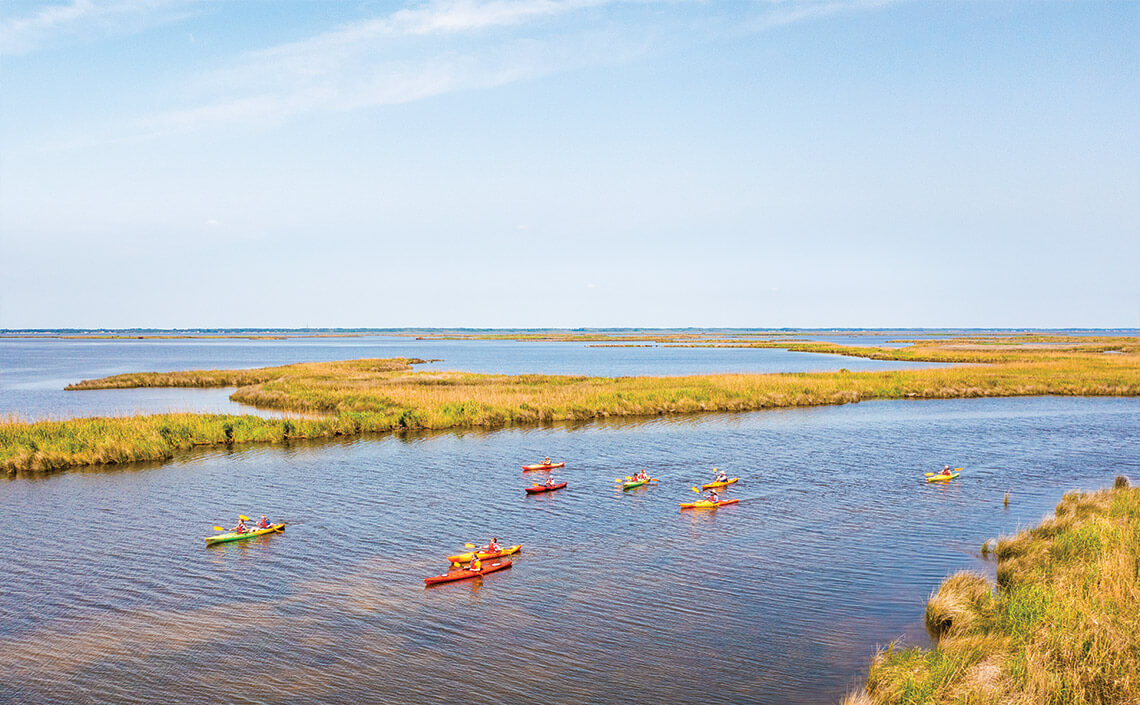 Dining is just one part of what Duck has to offer. After you fuel up on good food, gear up for a paddle or wind down with shopping, yoga, or a relaxing stay.

Beginning at the 11-acre Town Park, the Soundside Boardwalk winds for nearly a mile, with easy access to shops, restaurants, and maritime forest on one side and views of Currituck Sound on the other.

Two locations, in Duck and Corolla, feature handmade products from more than 200 craftspeople across the country, including home decor, accessories, bath products, pottery, and woodcrafts.

On the beach, on a paddleboard, or in the studio, classes range from gentle and relaxing (try the spalike “Hot Stone Bliss” class) to power flows (they’ll turn up the heat — literally — during hot yoga classes).

This beachfront resort includes full-house vacation rentals alongside its luxurious guest rooms, plus a spa, three pools, a fitness center, and three restaurants.