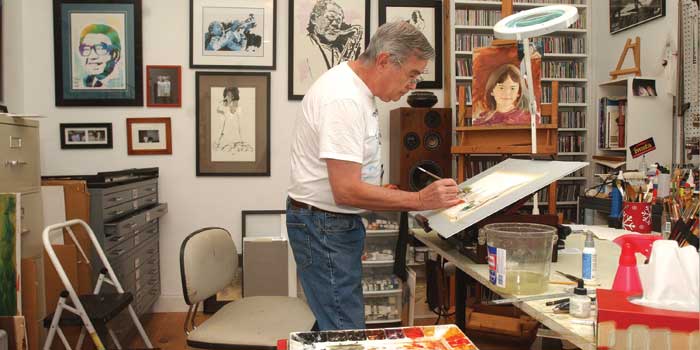 Ed Macomber’s arm darts right to left and left to right, from water to paint to decreasingly naked canvas and back again.

In a few minutes, he has completed and narrated the rendering of a farmer’s field, the foreground for a painting in progress in his Trent Woods home studio.

Sometimes Macomber might take three hours to complete one of his vibrant watercolor works, maybe less. Only recently has he summoned the nerve to ask a fair market price for a painting, even when people ask how long he worked on it.

The answer is deceptively accurate.

Macomber, a 67-year-old Long Island, New York, native, only began painting full time a decade ago. Before that, he earned an art degree from New York City’s Wagner College, served a tour of duty in Japan as a U.S. marine, married a Morehead City woman, sold Toyotas for 14 years, and owned a New Bern art-supply store for 15 more.

All the while, Macomber used nearly every spare moment to develop his skills as an efficient and prolific artist, to the point that friends in the art community convinced him to sell his shop and paint for a living.

Since then, the North Carolina Watercolor Society has twice honored him, and his colorful, emotive works have hung in galleries from Southport to New Bern to Wilson. He recently received the William James Memorial Award for a sunrise painting of the space shuttle Endeavour after its final flight, titled End of an Era.

Macomber’s subject matter is limitless; a devoted fan of jazz music and the Carolina Panthers, he’s used his quick, decisive brushstrokes to paint everything from commissioned portraits and rainy cityscapes to football players, jazz musicians, and horse races.

His efficiency comes with decades of training for a career that was long overdue.

“Well, I have to be honest and say I should’ve been doing this 35 years ago,” Macomber says. “As long as people love my art, I’ll keep making it.”