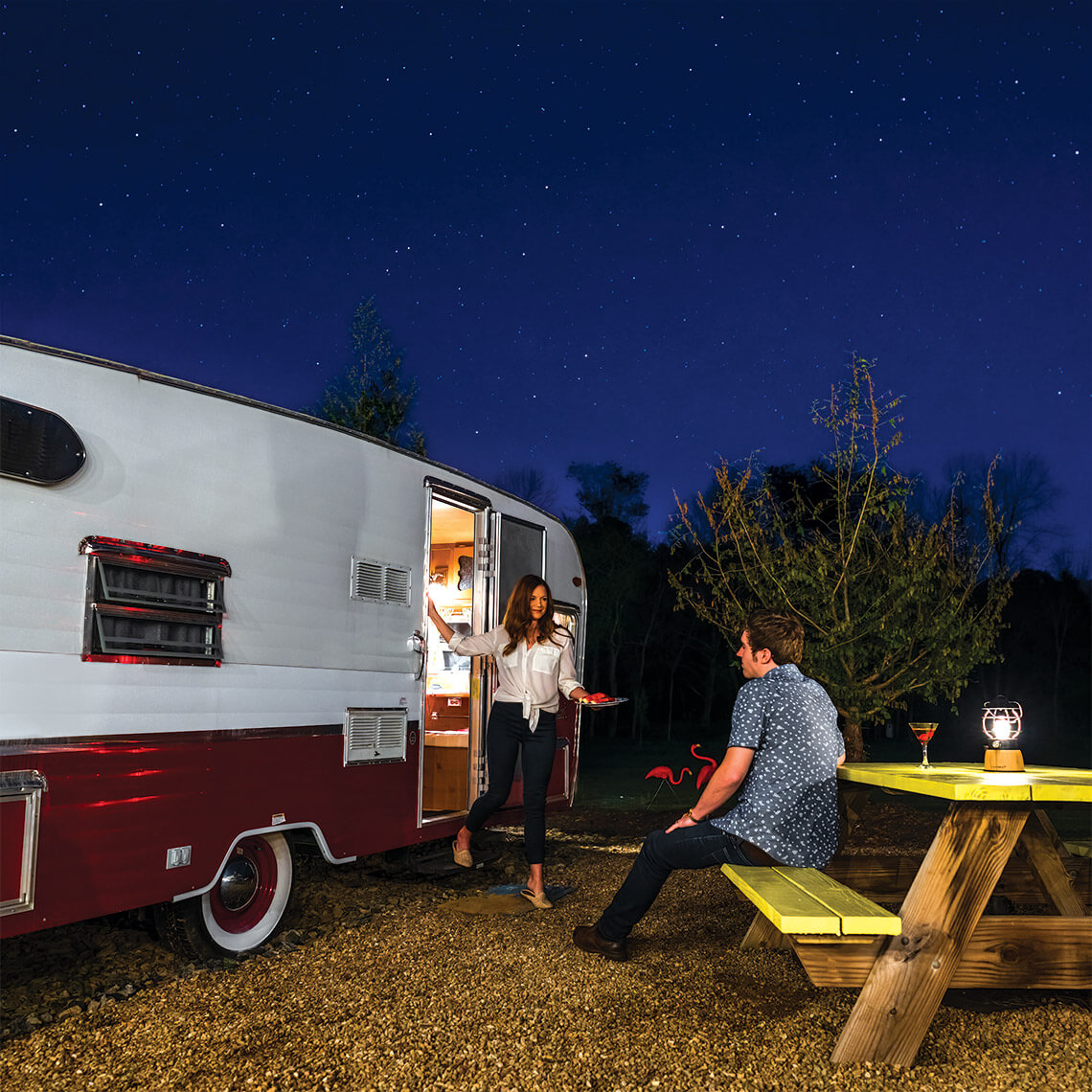 Julia Belcher and Andrew Oliver fell in love with JuneBug’s retro campers, including this replica of the popular 1961 Airflyte, which Shasta reissued for its 75th anniversary. photograph by Thomas Moors

A vision of vintage campers dawned on Tom Pagano out of the blue: One morning, he turned to his now-wife, Charlene, and said, “We should open a retro park.” Charlene had no idea what that meant, but together, they brought Tom’s idea to life, and JuneBug Retro Resort opened in 2017. On 50 acres north of downtown Asheville, the Paganos operate a farm, wedding venue, and the retro rentals that Tom dreamed up — 10 vintage campers, restored to their mid-century glory and carefully decorated with era-appropriate fixtures. Each “little tin house” has its own unique personality, Charlene says, like the flamingo-print curtains that hang in JuneBug’s 1959 pink Shasta. At night, guests gather around the communal firepit to chat and share memories — many say that the campers transport them back to family vacations from childhood. 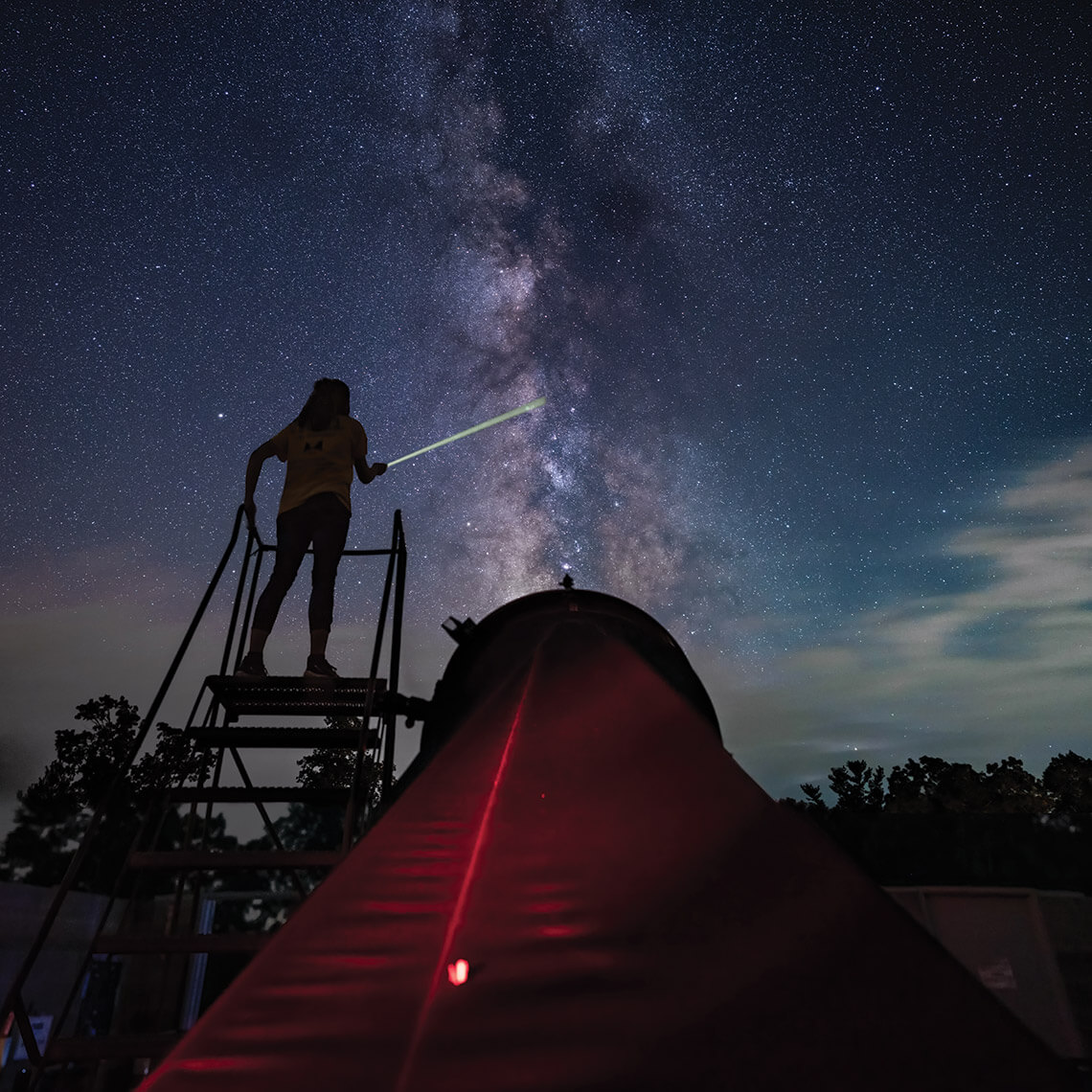 Celestial bodies seem closer at the Earth to Sky Park in Yancey County, where the lack of light pollution has earned the six-acre site, managed by Mayland Community College, a special designation from the International Dark-Sky Association: the first certified Dark Sky Park in the Southeast. Named for donors Warren and Larissa Bare, the on-site observatory takes full advantage of its 2,736-foot elevation, featuring a roll-off roof and a custom-built Newtonian telescope. The “Sam Scope” is the largest public telescope in North Carolina, and it takes astronomy students and members of the public on a cosmic adventure, exploring Saturn’s rings, distant stars, and other wonders of the universe. 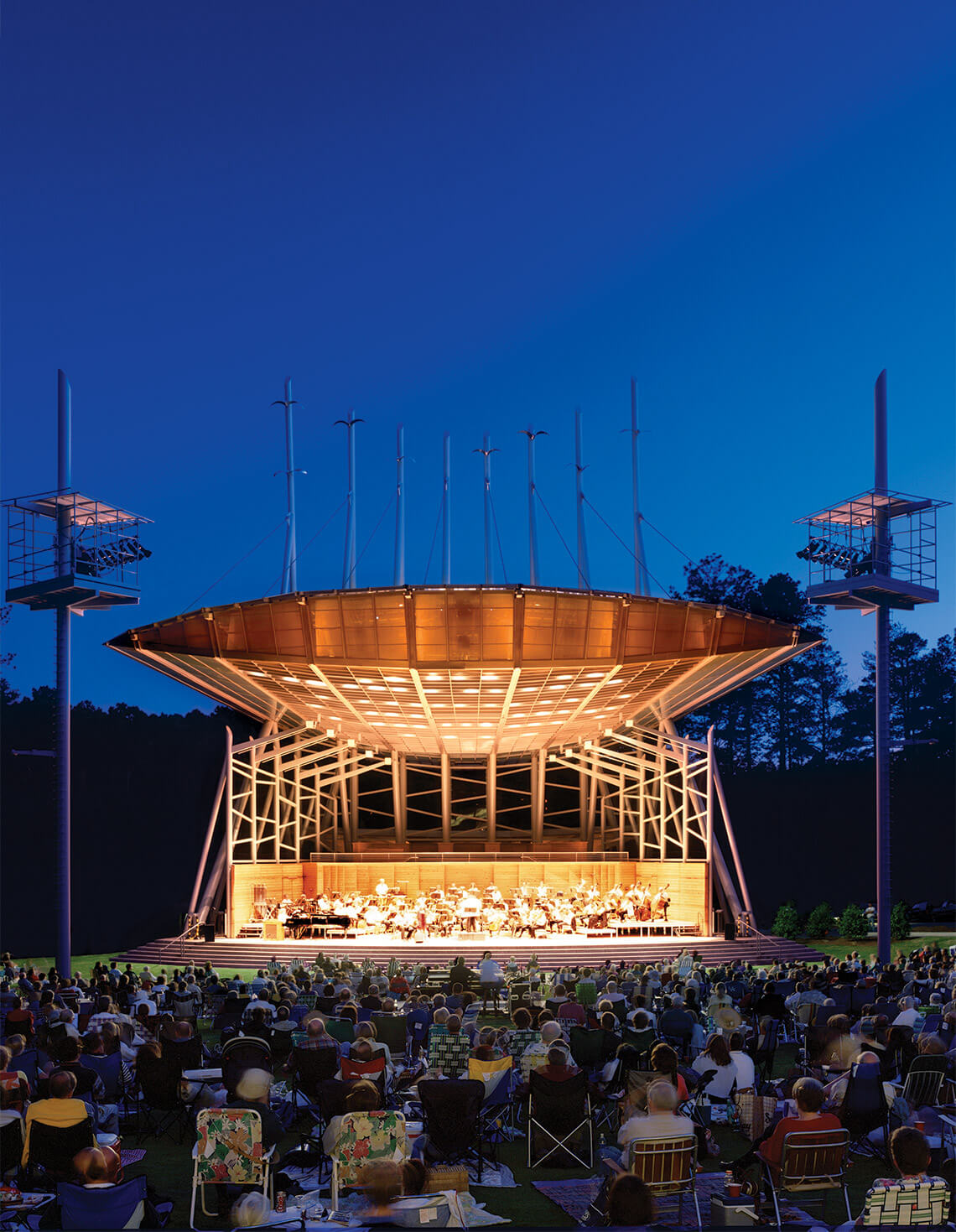 Like a secret hideaway tucked in the trees, Koka Booth Amphitheatre is a place apart. On the shores of Symphony Lake, people set up lawn chairs around the glow of a stage that’s cradled in the woods. The amphitheater, named for a former Cary mayor, is modern and spacious — it can accommodate 7,000 — but a performance there can feel as down-home and intimate as a backyard concert. Koka Booth has filled warm summer nights with classical music and jazz, bluegrass and rock since it was built in 2001. Yet it fits so naturally into its surroundings that it feels like it’s always been there, deeply rooted in the land of the longleaf pine. 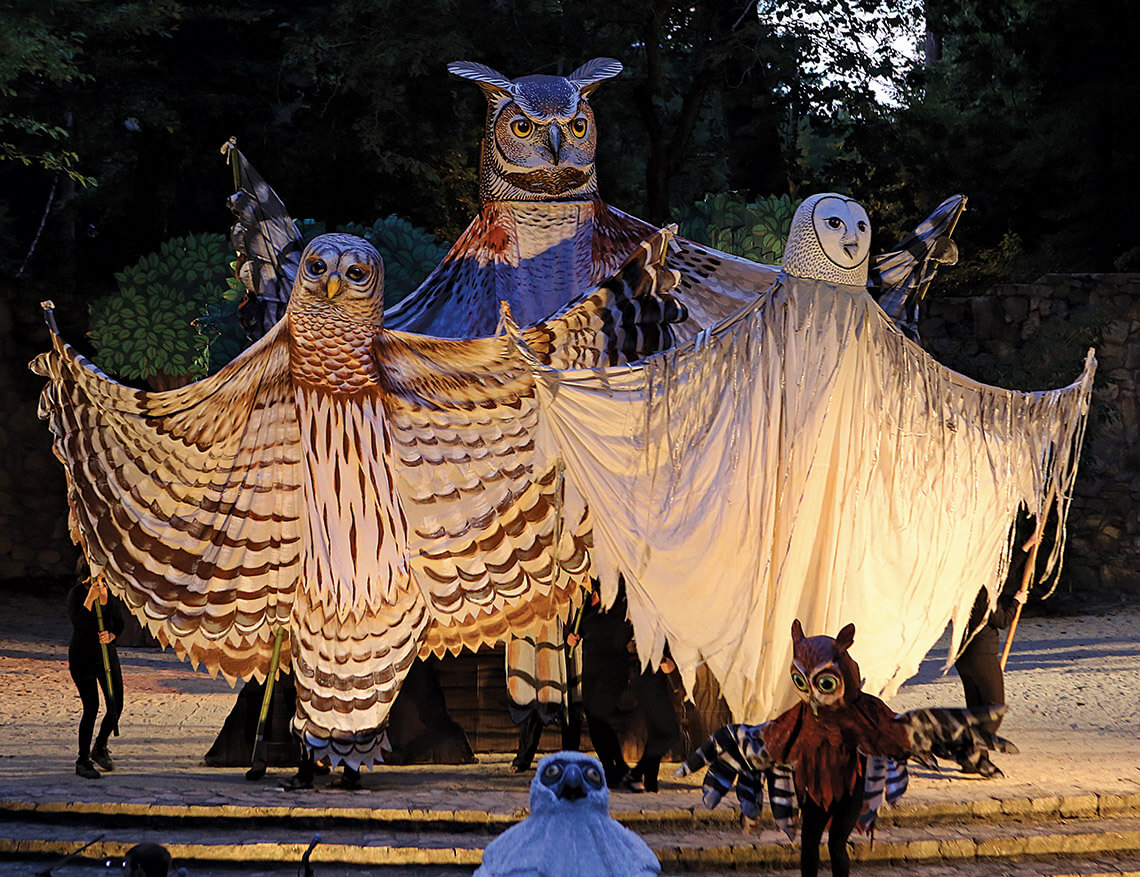 Paperhand Puppet shows, including A Drop in the Bucket, often depict scenes of nature and mythology. Photography courtesy of PAPERHAND PUPPET INTERVENTION

In another wooded pocket of the Triangle, the towering creations of Paperhand Puppet Intervention bob and whirl across the stage at the Forest Theatre in Chapel Hill. The 1940s-era stone amphitheater feels almost ancient, making it the ideal backdrop for Paperhand’s sweeping stories about the world and our place in it. Artists Donovan Zimmerman and Jan Burger founded the collective more than 20 years ago. In their Saxapahaw studio, artists, musicians, and community volunteers work together to prepare Paperhand’s annual summer production, turning humble materials like cardboard, cloth, and cornstarch into colorful characters whose ingenuity and sheer scale inspire wonder and delight. 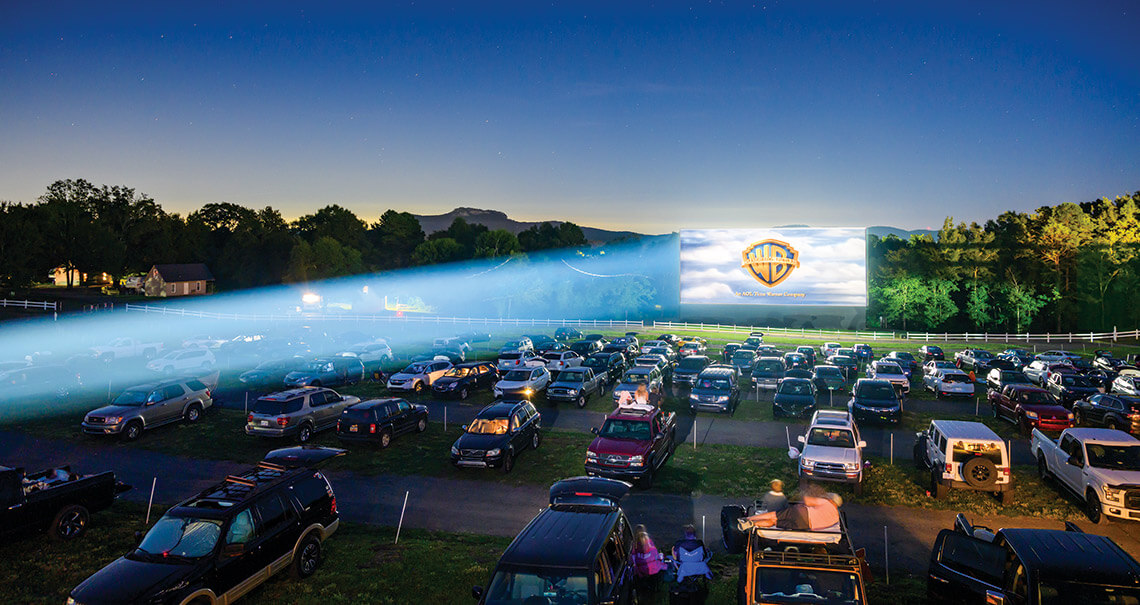 From March through November, Hound’s Drive-In offers double features every Friday and Saturday night (plus Sundays in the summertime). Tickets are sold by the carload. photograph by Emily Chaplin and Chris Council

Jada McDaniel and her brother Preston Brown have always had a special connection to the silver screen: When they were children, their family owned the local cinema in Kings Mountain. “Theaters have always been in our hearts,” McDaniel says. “It’s what we love doing.” So when Brown looked at the slope of the land where the old Glen Raven mill once stood, he saw that it made perfect “stadium seating” for cars, and plans for a drive-in theater began to take shape. Hound’s opened in the spring of 2016, and it was an immediate hit — so much so that the family added a second screen, and then a third. People come from hours away for an experience that’s not so easy to find anymore — and in a setting that’s distinctly local. As the sun sets behind rows of cars, night falls over Kings Pinnacle, rising in the distance. 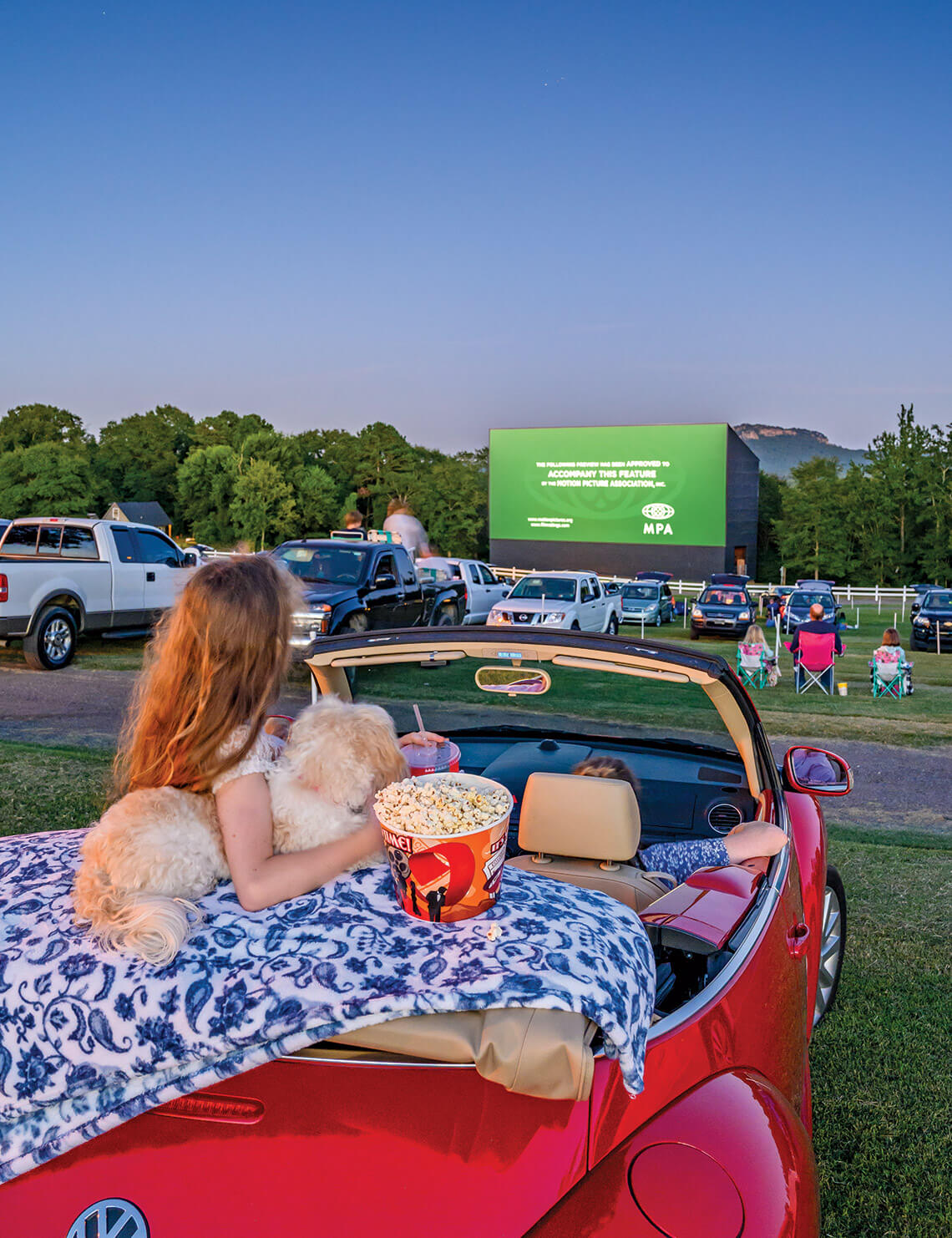 Lucianna Jane McDaniel, age 13, and Callie the dog, age 14, have been regulars at their family’s drive-in since it opened. photograph by Emily Chaplin and Chris Council

Showtime doesn’t start until dusk, but folks usually show up much earlier — both to get a good spot and to spend time visiting with friends and family. Hamburgers, hot dogs, and ice cream from the concession stand give the theater the feeling of a sprawling tailgate. Kids clamber over the on-site playground while their parents toss a football or a Frisbee. McDaniel has even seen people set up board games to play. Hound’s also hosts birthday parties, graduation ceremonies, and concerts — including, recently, a performance by Bon Jovi. The pandemic has slowed the release of new movies, but customers don’t seem to mind watching older films, McDaniel says. They’re happy to park, sit back with a bucket of popcorn, and enjoy a little rush of nostalgia. 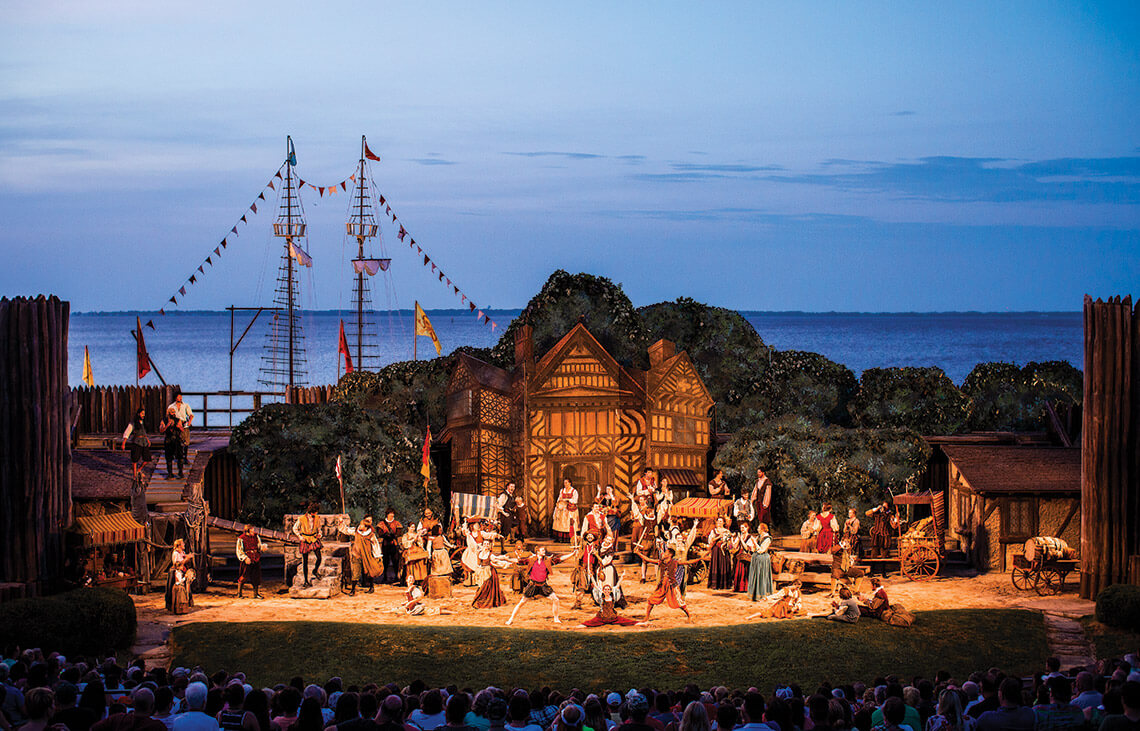 Each summer, The Lost Colony returns to Waterside Theatre, part of Fort Raleigh National Historic Site. The amphitheater was built with labor from the Civilian Conservation Corps and funds from the WPA. photograph by Chris Hannant

A sky full of stars and the deep blue waters of Roanoke Sound provide the backdrop for The Lost Colony — just as they did when the actual colonists arrived on Roanoke Island in 1587. Fascinated by the vanished settlement, Chapel Hill playwright Paul Green made it the subject of a “symphonic drama” that debuted in 1937. To prepare for that first production — attended by President Franklin D. Roosevelt — Albert Quentin “Skipper” Bell, an Englishman who specialized in skills like thatching and constructing log buildings, created the Waterside Theatre in about six months. Since then, the amphitheater has been destroyed by fire and flood, rebuilt, and improved, but it still resembles Bell’s original design — as enduring as the play’s central mystery. 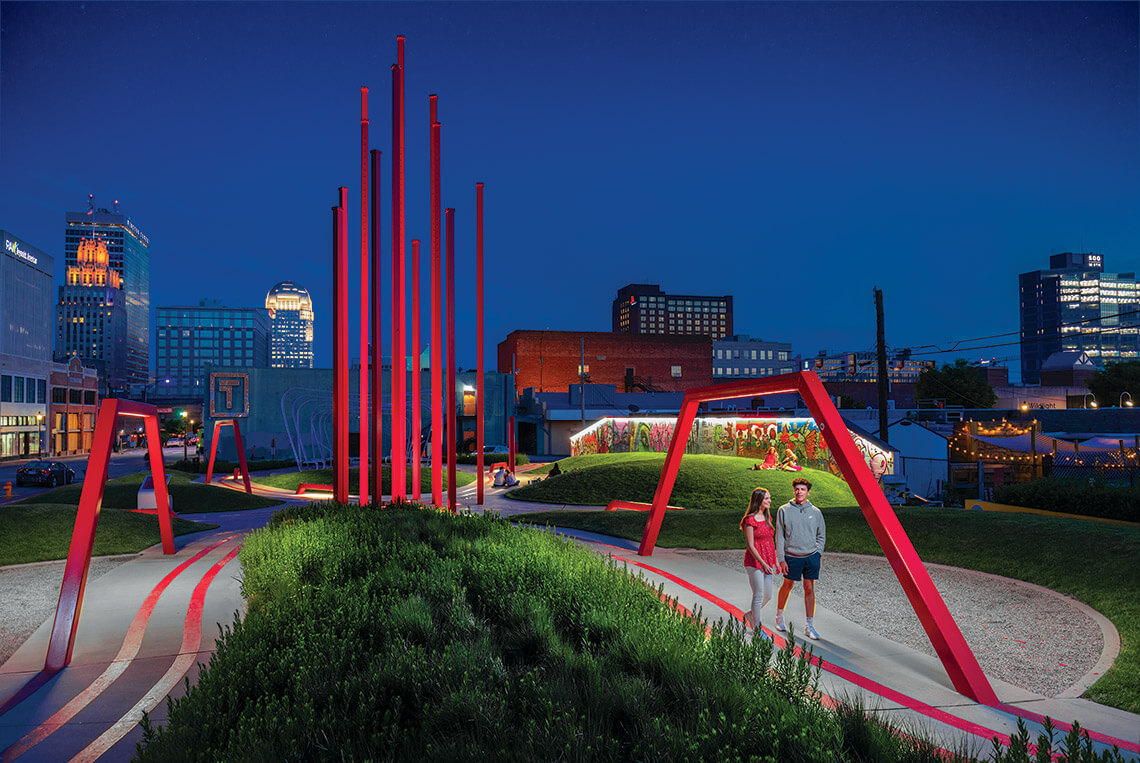 People come to ARTivity on the Green to enjoy live music, art festivals, and evening strolls around the red “Tower Cloud” at the center of the park. From April through October, the 13 “smokestacks” spout a cooling mist. photograph by Jerry Wolford & Scott Muthersbaugh

Night is ARTivity on the Green’s time to shine. The half-acre park looks dynamic at any hour, and it’s especially eye-catching when its illuminated steel sculptures splash color against the dusky skyline. ARTivity was planned with intention, drawing on Winston- Salem’s industrial past and linking two pillars of its present — the Arts District and the Innovation Quarter. When the park opened in 2015, it transformed a forgotten pocket of downtown into an inviting city in miniature: All around the red “Tower Cloud” — designed to mimic the iconic R.J. Reynolds Building — grassy hills reflect the rolling Piedmont. 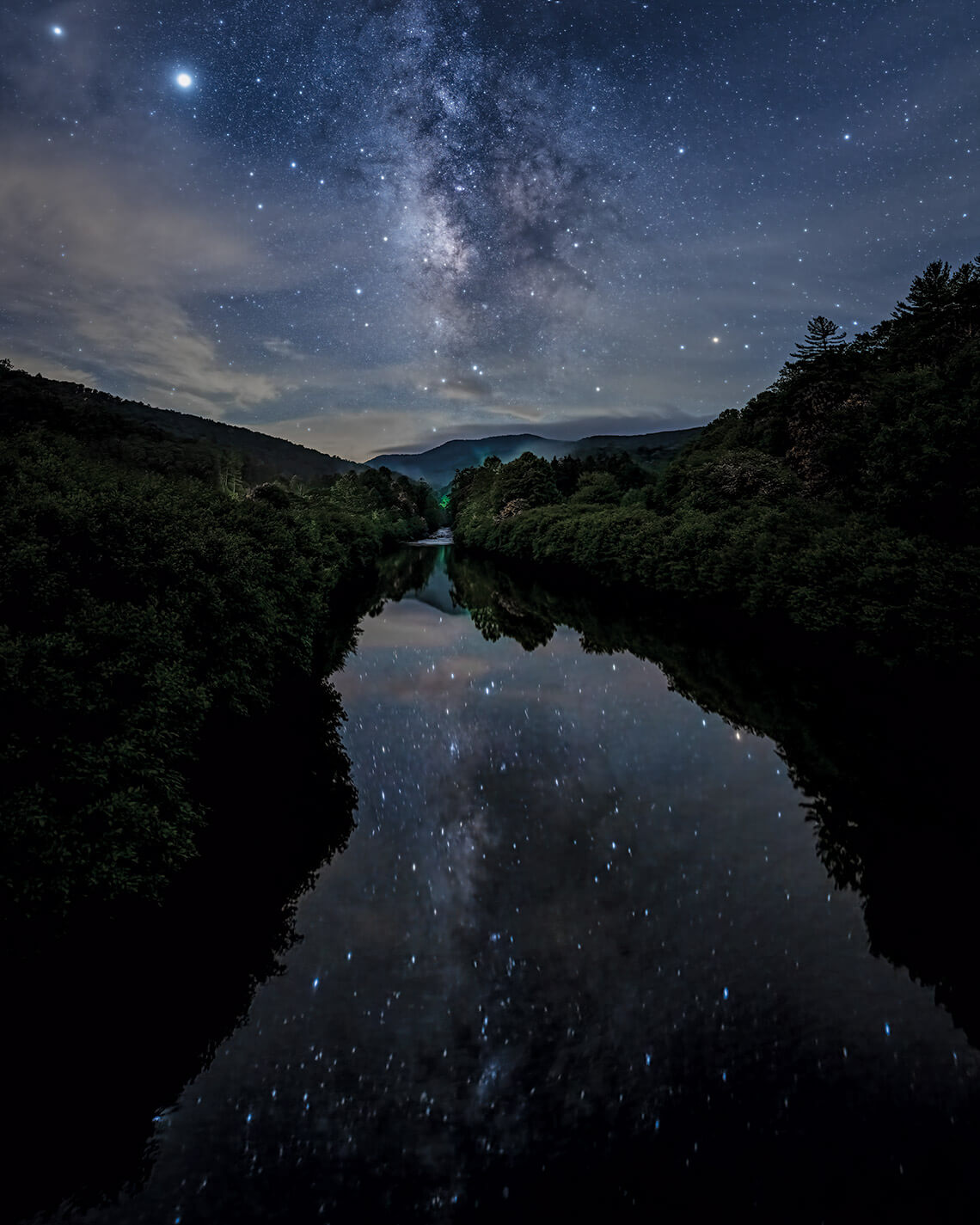 Along the Blue Ridge Parkway, near the West Fork of the Pigeon River, our mountains are witness to spectacular skies. photograph by Thomas Moors

In the west, our ancient, lofty landscape rises to meet the endless, age-old sky. Too many of us forget to lift our eyes, or we take it for granted that the stars are ever-present, whether we can see them or not. But dedicated stargazers — in the mountains and across the state — know better. Outside the cities and little mountain towns, over the Blue Ridge Parkway and the rivers that course along peaks and valleys, a stunning, sparkling scene reveals itself to those who venture into the dark. 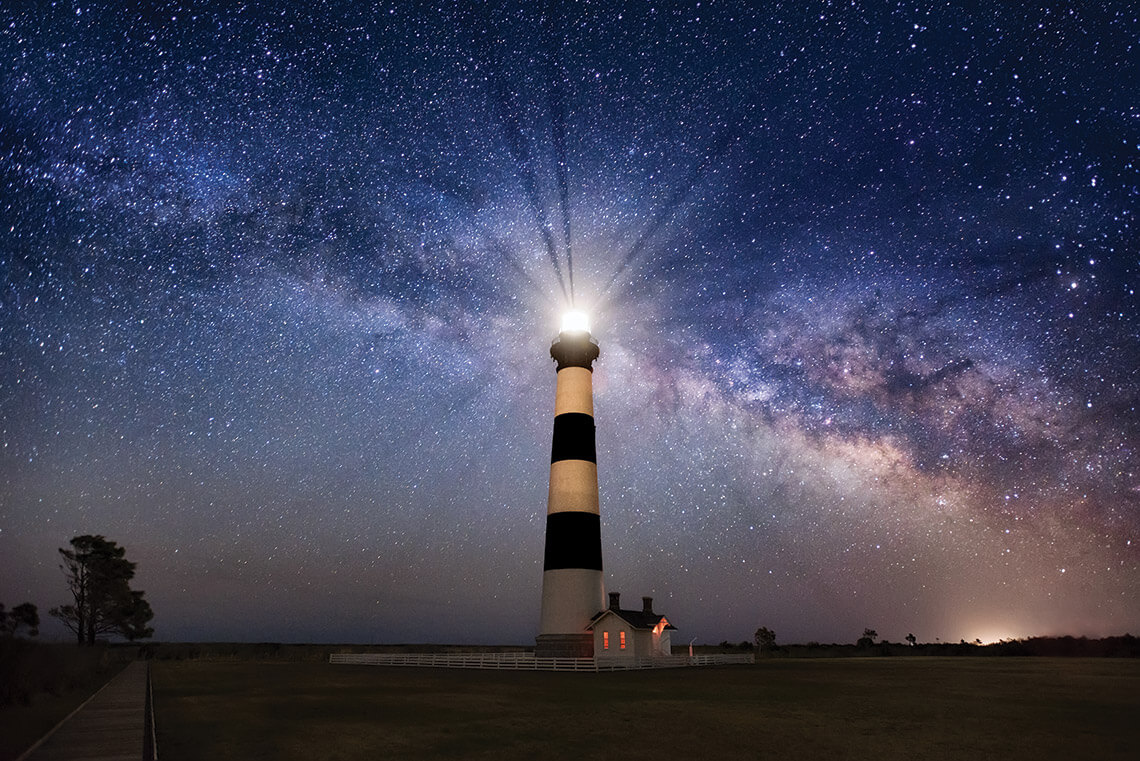 Some of the darkest night skies in North Carolina — and, indeed, in eastern America — can be found on the Outer Banks. With the sea on one side and sounds on the other, there’s little light pollution to disturb the view. Along national seashores like Cape Hatteras and Cape Lookout, park rangers and stargazers work together to preserve and protect that darkness, spreading the word about the harms of artificial light. In the dark, sea turtles can safely navigate the shoreline, bioluminescent plankton sparkle in the surf, and an ocean of stars stretches into eternity.

Stargazing: Look up! We talked to three stargazing experts about how to use a star chart, their best telescope tips, their favorite places to stargaze, and the most amazing thing they’ve ever seen in the night sky. Visit ourstate.com/osknowsbest.