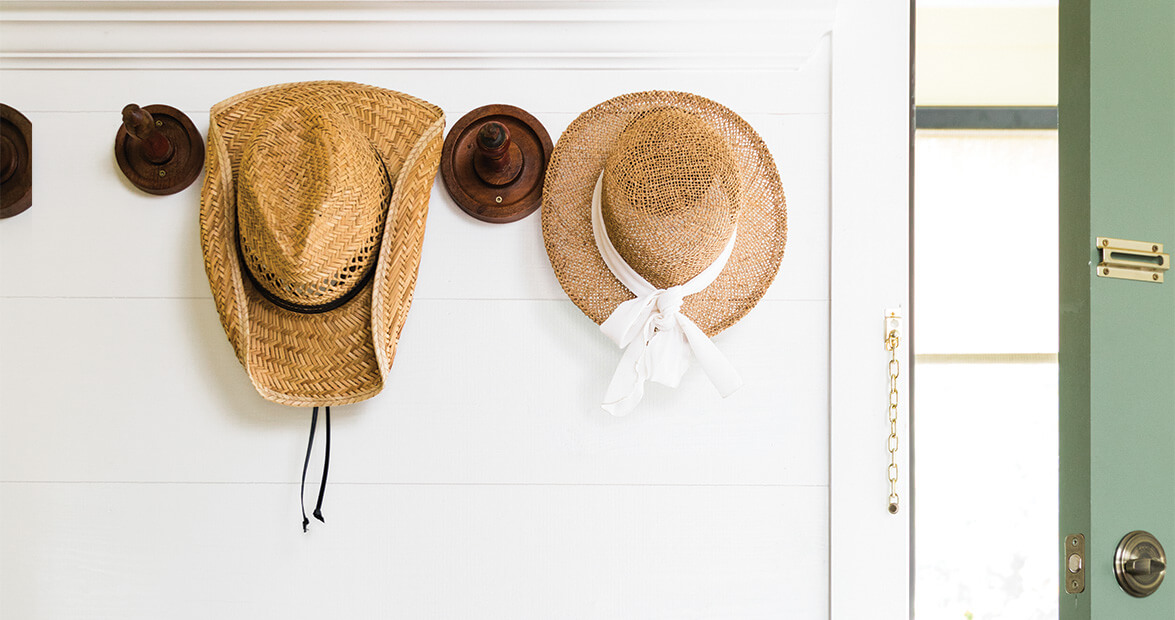 Homes We Love Series: From a carefully restored historic American Foursquare in High Point (you can stay here!), to a farmhouse with family touches in Lumberton to a mountain couple’s warm and rustic home and vacation cabin in Brevard (yep, you can stay here too), these comfortable spots in North Carolina have us eager to kick off our shoes and settle in. 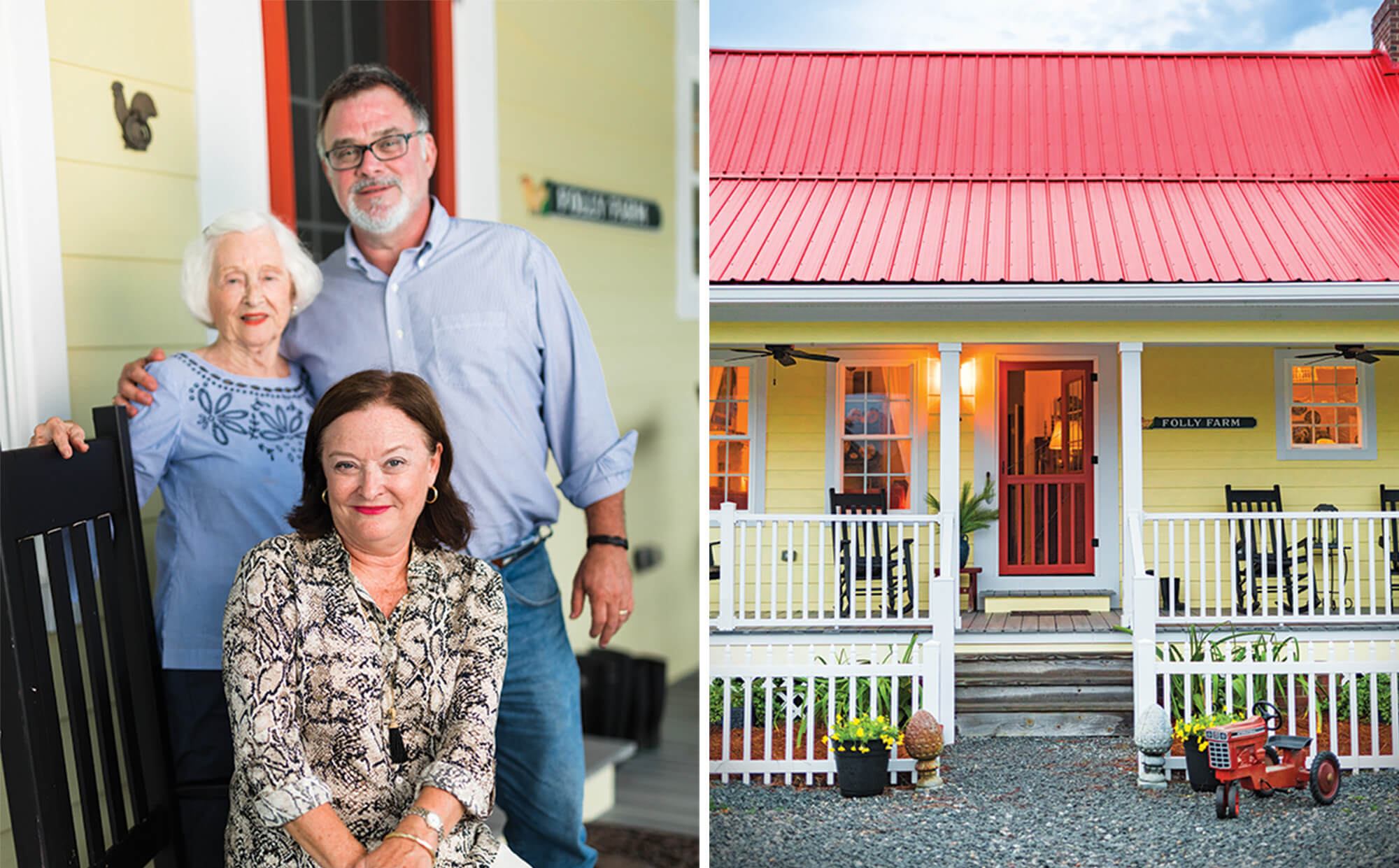 Susan Noble’s charming yellow farmhouse, which she shares with her mother, Jean, is a cozy home base for family members, like her brother, Les, who visit and hunt on the surrounding land. photograph by Baxter Miller

Picnics and tents are all fine and well on the weekends when your brother and your nephews — and you yourself — are hunting and four-wheeling on your 235-acre family farm outside Lumberton. For a while. But eventually, Susan Noble thought it might be nice to have a bona fide bathroom. And a bed. “Heck,” she says, “I just decided: I’m going to build a little house.” That was five years ago.

Like everything else, farmhouses evolve. Two rooms become three — four when Grandma moves in. And Noble has fostered that evolution, enlarging her “little house” room by room, project by project. It’s become Folly Farm, a name she’s been saving ever since she glimpsed a sign on a college study-abroad trip to England.

Noble, a retired family and consumer sciences extension agent, has had no formal training in interior design or decorating — she simply loves farms. So she took her farmhouse themes from what she knows, what she loves, and what’s going on around her. And Noble loves a chicken. Chickens in ceramic, metal, needlework, paintings, and fabrics are all over the house: on pillows and plates, atop the entrance columns, and even on the tasseled handle of an antique corner cupboard. An old egg-gathering basket has become a “chandelier,” recalling her father’s stint in the egg and produce business. A coop for the real thing was recently constructed and will welcome its first residents in the spring. 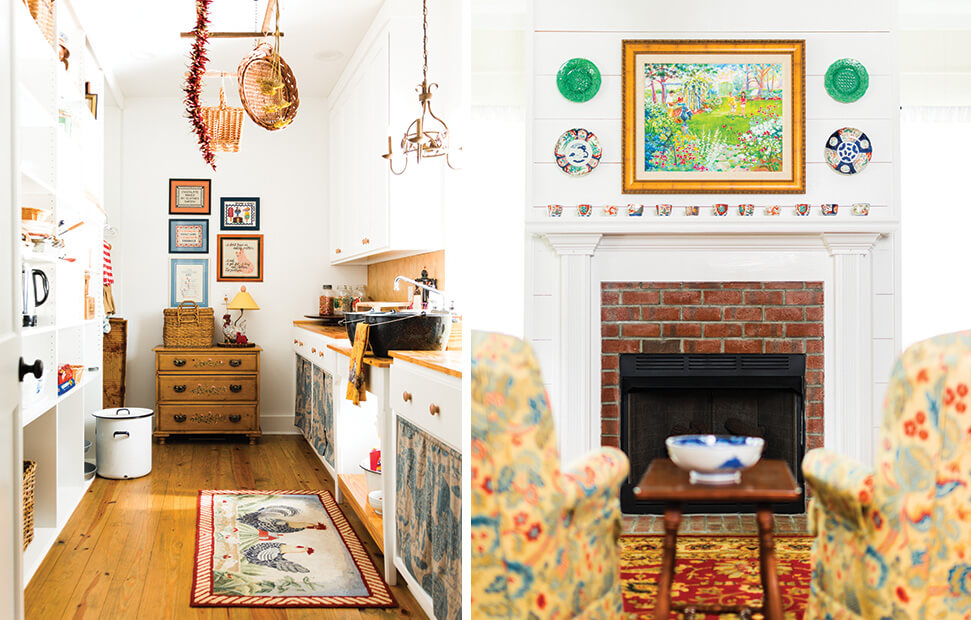 Within the farmhouse-white walls of the living room, Noble adds splashes of color with patterned chairs, rugs, and the artwork and porcelain over the fireplace. photograph by Baxter Miller

As for adapting to what’s going on around her, Noble has yielded to the hunters in her family, including her brother, Les, a frequent visitor. The upstairs loft bed is made up with camo shams, and a necklace of duck calls — instead of, say, pearls — dangles from the handle of a gun safe. A sliding barn door separates the bedroom from the bathroom, whose walls are covered in shiny, silver, corrugated tin roofing — what better waterproofing? Oversize hooks from pulleys have become towel holders.

Repurposing farming tools is a favorite challenge for Noble and her mother, Jean, who also lives at Folly Farm. “Agri Supply is our favorite place,” Noble admits. Floors throughout are pine, a decision her contractor balked at because of the wood’s softness and propensity for denting. But Noble didn’t care, she insisted. A true farmhouse has pine floors.

One of the most charming features in the house is the hall, which the Nobles call “the dogtrot,” because it has a door to the outside at either end. Local artist Thomas Ard painted a mural, in pastel greens and golds, representing a whimsical, childlike version of Folly Farm. There’s the chicken coop, the pond where Les’s dog swims, the fields. When the contractor complained that he wasn’t in it, Ard added a toolbox outside the barn.

A galley workroom-with-a-view is filled with items that represent Noble’s farmhouse mistress personality and talents, from canning implements to an antique flower press to drying racks for the potpourri she makes with her homegrown blossoms to the chains of hot peppers dangling and drying, slated to become Christmas wreaths. Spatterware buckets have been repurposed as a double sink. 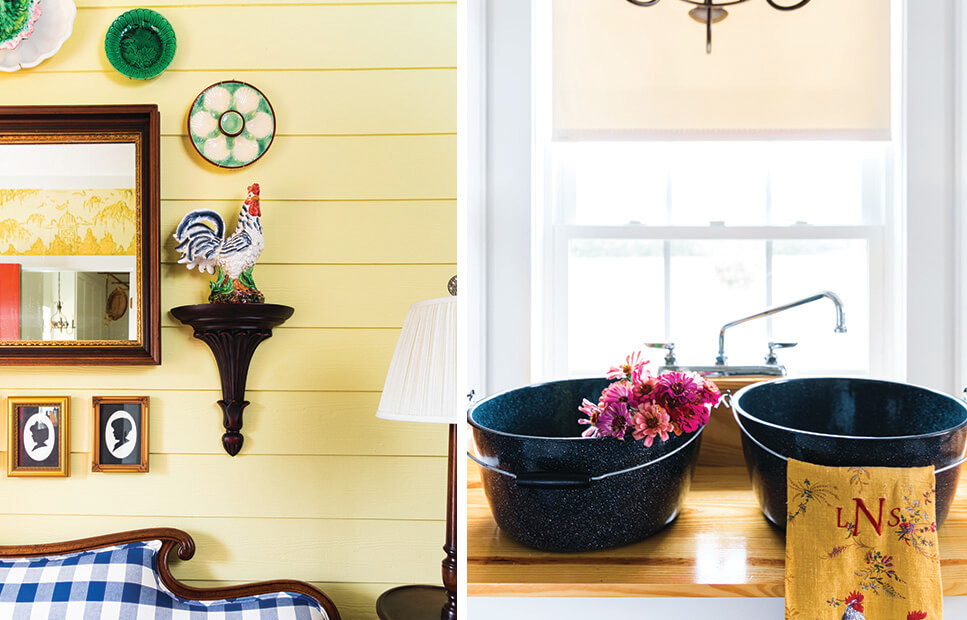 Inside Noble’s workroom, which she often uses for drying flowers, features a double sink made of old Spatterware buckets. photograph by Baxter Miller

Noble hasn’t missed a farmhouse trick. Outside, herbs thrive in an old watering trough. A trowel, hung vertically, offers a handy pull to get yourself up the steps to the porch. Tree stumps, not wicker, provide seating around an outdoor fire pit. Farmers, after all, invented the concept of reduce, reuse, recycle.

“We’re nowhere near finished,” Noble says. The twin themes of farming and hunting are down-home enough to keep her “little house” expanding, need by need, beam by beam, chicken by chicken.

Next in series — Homes We Love: Designer’s Paradise