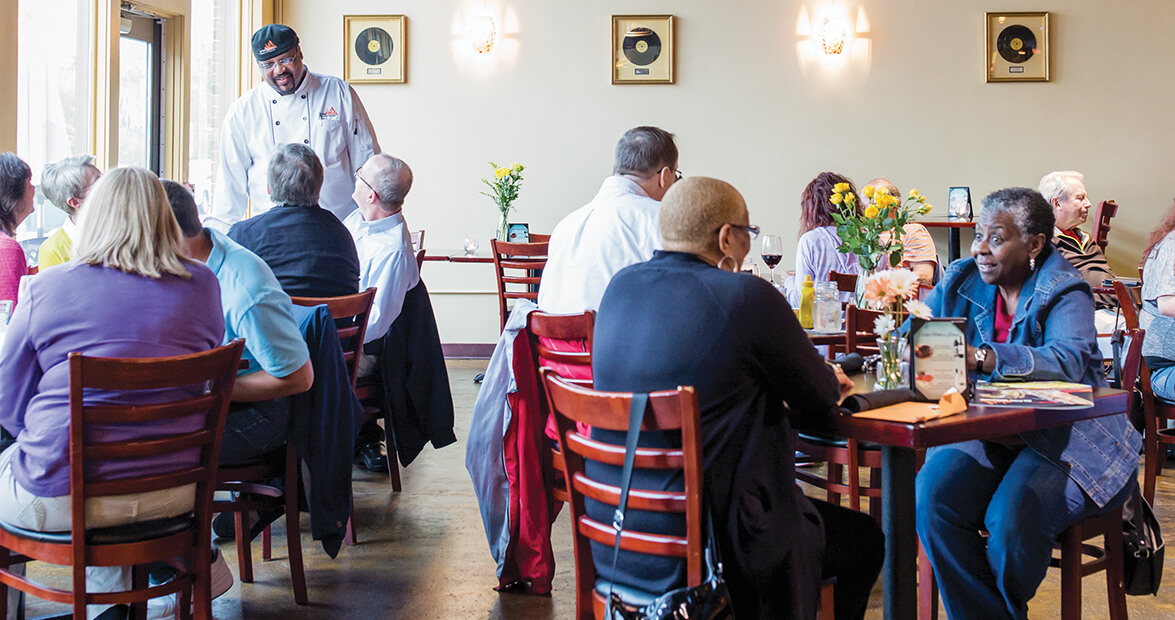 Normally, you’d start with the food. The salmon is spicier than you’d expect. The Texas brisket is, too. The sweet potatoes aren’t candied. They’re soft and delicious, made with an orange-ginger glaze. The macaroni and cheese is award-winning. The Ethiopian coffee is strong. The peach cobbler, hearty.

Then you’d look around. See the trombone, saxophone, and fedora in the corner. The exposed brick, painted yellow. The soft lighting. The big glass windows that look out onto the sidewalk tables along East Thomas Street. The craft beer on tap. The elaborate tea service. Over there, where a few tables sit a bit higher than the rest? That used to be a stage. The only music playing: jazz. Softly. In the background.

Ignore all that. Look at the people. 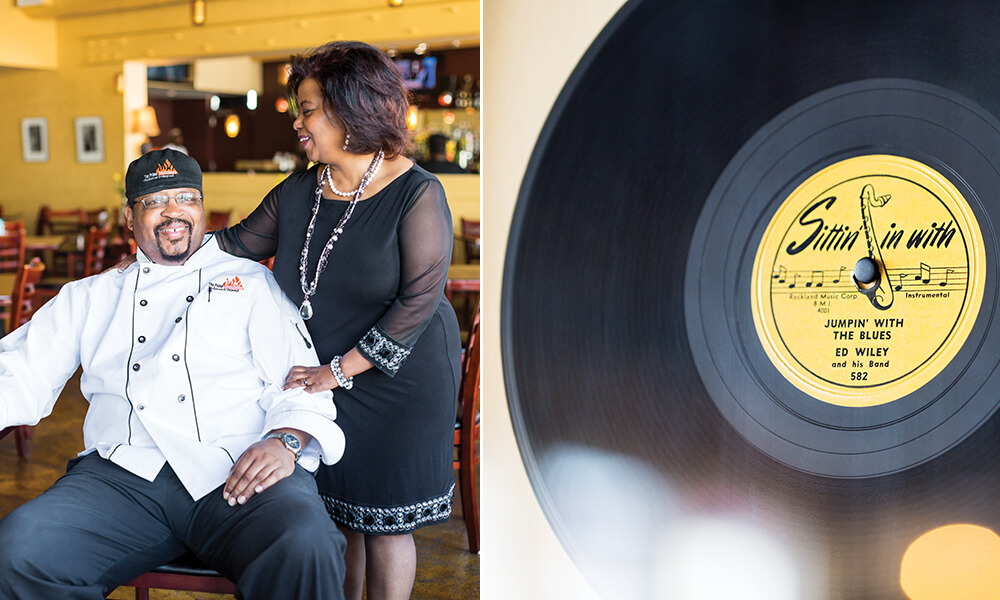 There’s a lot of Ed Wiley III’s father in the restaurant Ed owns with his wife, Yalem. Ed hung his dad’s jazz records on the walls. photograph by Eric Waters

The new superintendent of Nash-Rocky Mount Public Schools is here for a dinner meeting. The former superintendent of schools in Wilson came to have dinner with his wife. There’s a young couple who just moved here from New Jersey, and an older couple driving home from Florida to New York.

Ignore their jobs. Ignore their hometowns. Look at their faces. Some are white. Some are black. Some are young. Some are old. Some hair is short and gray, some long and dreadlocked. Some people wear suits. Some wear jeans. Look at all that. And then think about where you are. And how something like this, in this town, in this part of town, is remarkable. Even today.

Rocky Mount has long been a city divided. The double set of railroad tracks, where trains still rumble through every few hours, neatly slices through town. The Nash County side of the tracks is mostly white. The Edgecombe County side is mostly black. Historically, if you lived on one side, you didn’t cross the tracks to the other. The late Fred Turnage, the mayor here for 34 years, was among those who tried to change that, but it’s hard to alter a habit. People tend to go where they’ve always gone.

In 2010, the city broke ground on the Douglas Block, a collection of old storefronts just barely on the Edgecombe County side. The idea was to fix up six buildings that, long ago, had been African-American-owned shops. The tracks weren’t a dividing line, a police chaplain said at the time, but “a big zipper which brings us all together.” The Booker T. Theater reopened. Businesses moved in. Still, most people didn’t cross. And then, one day, a developer from Rocky Mount walked into a lively restaurant in Raleigh. He liked the food. He liked the idea of the jazz shows that the place held weekly. This is it, he thought. This is what the Douglas Block needs. This is what Rocky Mount needs.

Owner Ed Wiley III said yes, he’d move The Prime Smokehouse to Rocky Mount, but he didn’t really know what the big deal was. His late father, Ed Wiley Jr., a jazz musician from Houston, Texas, had toured the country after World War II. His band’s first big hit, “Cry, Cry Baby,” rose to No. 3 on the Billboard charts in 1950. But Ed’s father, who was black, wasn’t allowed to eat in the same places as the white people who watched his shows. Rather than go in the back door, he decided to feed his band himself. He’d make barbecued chicken, collards, mac and cheese.

Ed Jr. got off the road in 1964 to work as a machinist near Philadelphia to support his seven kids, but he never lost the ability to turn a bag of groceries into a gourmet feast. He’d make lunch for his coworkers; eventually, he bought a lunch truck, and the family made a good living selling food in Trenton, New Jersey.

Ed III, whom we’ll just call Ed now, went on to have a career in journalism, first in California, then in Washington, D.C. That’s where he met his wife, Yalem, a nurse who’d emigrated from Ethiopia. Together, they went to jazz shows in D.C. Like his father, Ed would feed everyone afterward.

In 2006, Ed and Yalem decided to move to North Carolina, and after a while, they got to thinking: We love jazz. We love to cook. What if we opened a place where people could come early to eat, and late to catch a show? 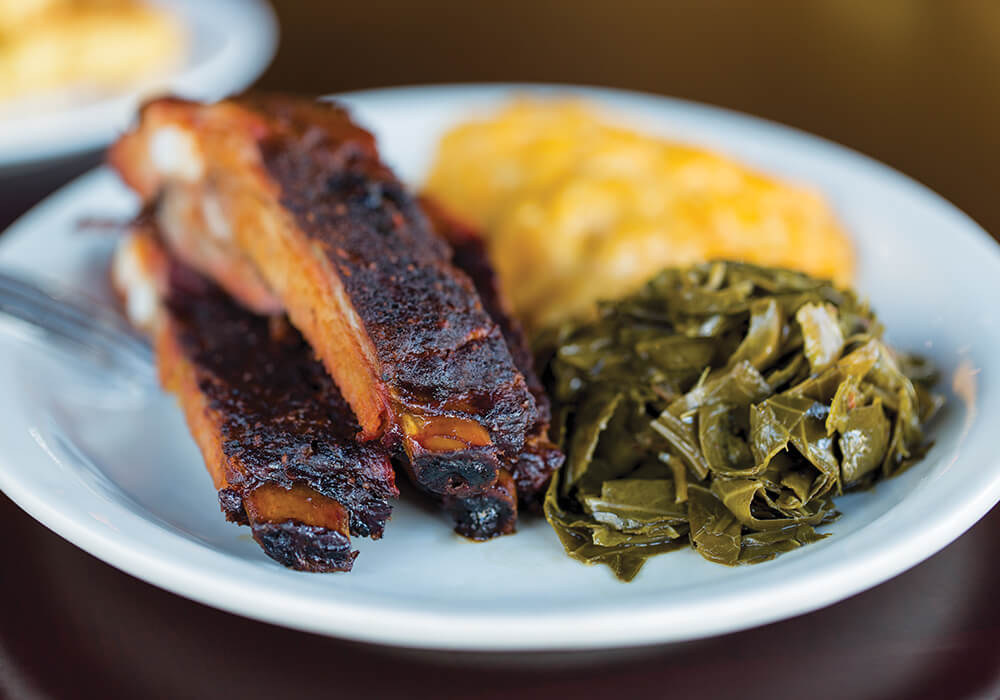 Ed Wiley III filled the menu at The Prime Smokehouse with dishes his dad used to make, like ribs, collards, and mac and cheese. photograph by Eric Waters

Two years later, they converted a space in Garner into the first incarnation of The Prime Smokehouse. Ed put his dad’s pictures and records on the walls.

He filled the menu with familiar dishes — barbecue, sweet potatoes, steak — but set out to cook the best version of each. Yalem helped make the food healthier and spicier. She refused to put saltshakers on the tables, instead pushing for Ethiopian seasonings in the recipes themselves. The dry rub for the ribs uses berbere, an African spice mixture.

Despite the food, music, and crowds, Ed and Yalem lost their lease to a fitness company. They reopened in Raleigh, but when the offer came from Rocky Mount, they jumped. The old auto garage on the Douglas Block would be more intimate. More meaningful.

Almost immediately, white people told them white people wouldn’t come. Black people told them it wouldn’t work. Ed and Yalem didn’t get it. They hadn’t grown up in the South. They didn’t understand the physical divisions. The long memories. They just wanted everyone to feel welcome. The city wanted an upscale place, but Ed and Yalem chose not to put out tablecloths. They didn’t want it to feel exclusive.

Norma Turnage came. The former mayor’s widow looked at the crowd. This was what her husband had wanted, all these years. For race not to matter. For the railroad tracks not to matter. Yalem saw her fighting back tears.

A restaurant can be many things, but it still has to be profitable. That means hard choices. Even though Rocky Mount is the birthplace of Thelonious Monk, jazz is a hard sell here today. The shows at The Prime Smokehouse went from once a week to once a month to permanent hiatus. Ed would get calls like this: You having music tonight? No? Great. Give me a reservation for 6:30. Ed didn’t want to bring in national acts just to have them perform background music. So the live music has stopped — for now.

But the food goes on. Yalem and Ed greet familiar faces. They visit with newcomers. Here, in Rocky Mount, inside a jazz-infused, Texas- and Ethiopian-inspired comfort-food restaurant, close to the busy train tracks that nobody used to cross. You know who’d want to eat here? Everyone.