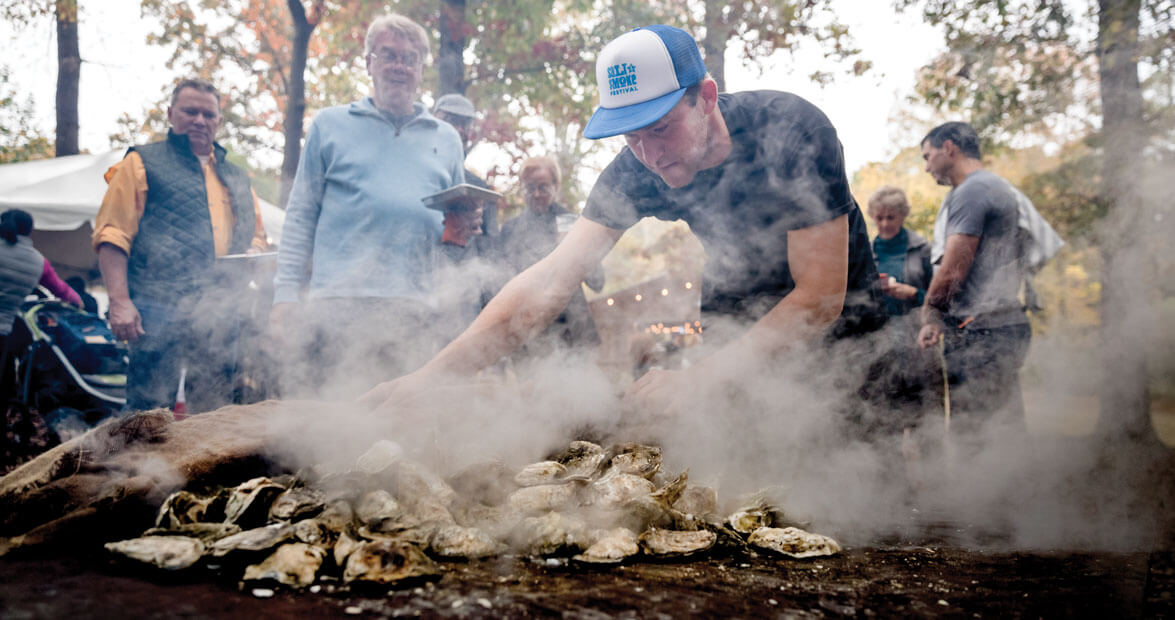 The night was freezing, but Kevin Callaghan felt warm sitting on a stump, watching embers dance above a three-story bonfire, surrounded by foodie friends in a farm field in Orange County. He also felt full. They’d brought big plastic buckets of fresh oysters from the coast and boxes of wine that they drank from red Solo Cups. They’d brought beer and marshmallows. Pans of Callaghan’s cornbread and a pot of collards seasoned with pork necks sat next to the fire. This, after all, was a celebration of the flavors of fall, and of friendship.

It started snowing, but near the fire, flakes evaporated before landing: a snow globe in reverse.

With the smoke rising and the snow falling and everyone gathered around eating oysters, “It was magic,” Callaghan says.

It was then that Callaghan, chef and owner of Acme Food & Beverage Company in Carrboro, thought to himself: We have to do this again. 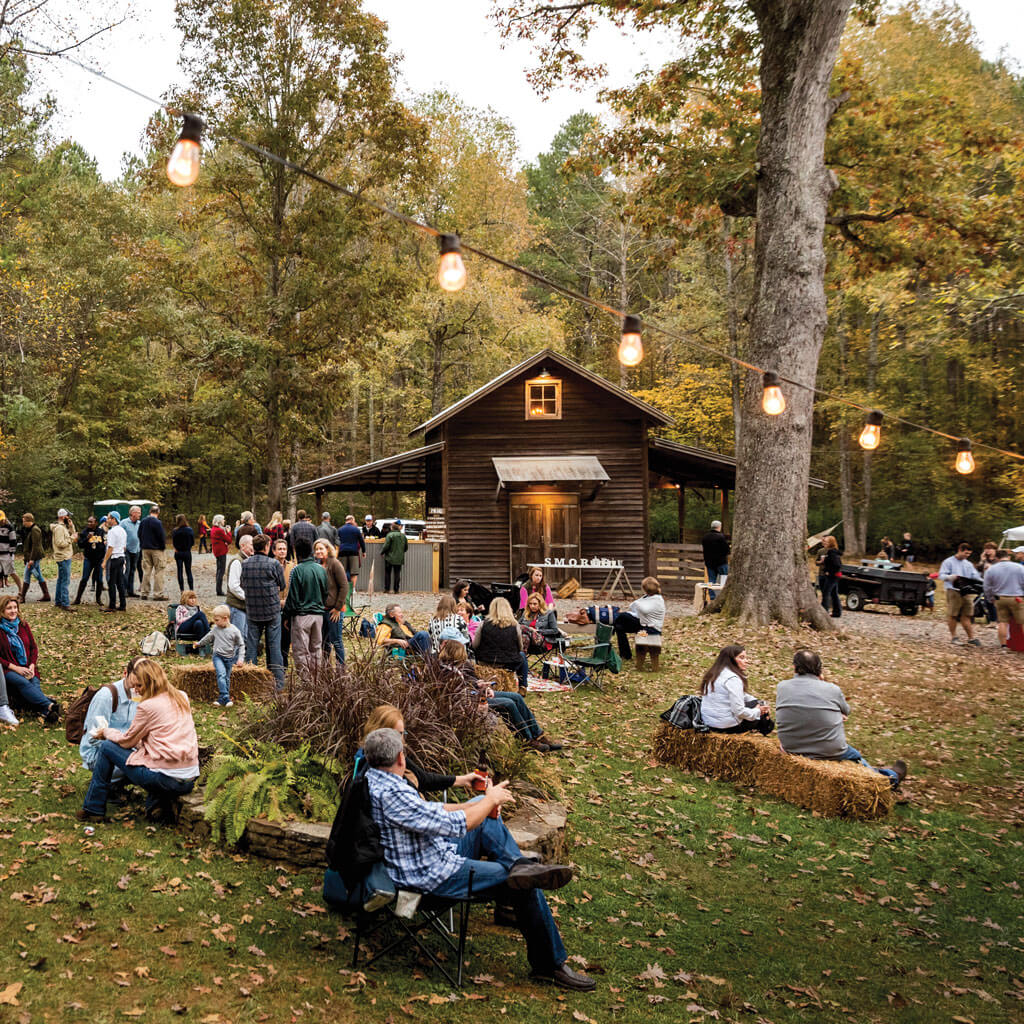 Back behind the farmhouse at Rock Quarry Farm, oyster fans and barbecue devotees gather together for the annual Salt & Smoke Festival, a party that celebrates North Carolina’s food traditions. photograph by Charles Harris

Tonight, on a slightly warmer fall evening six years later, Callaghan wears a soft blue apron over his crisp white chef’s shirt, a white dishrag hanging by his side, and a backward baseball cap as he lines up fresh oysters in big buckets of ice on the counter. A shucking knife in his hand, he pops open a half-dozen or so oysters, lines them up on a small metal tray, and hands it to the next person in line. Nearby, those who prefer their oysters roasted wait for the next batch as smoke from the fire drifts past. 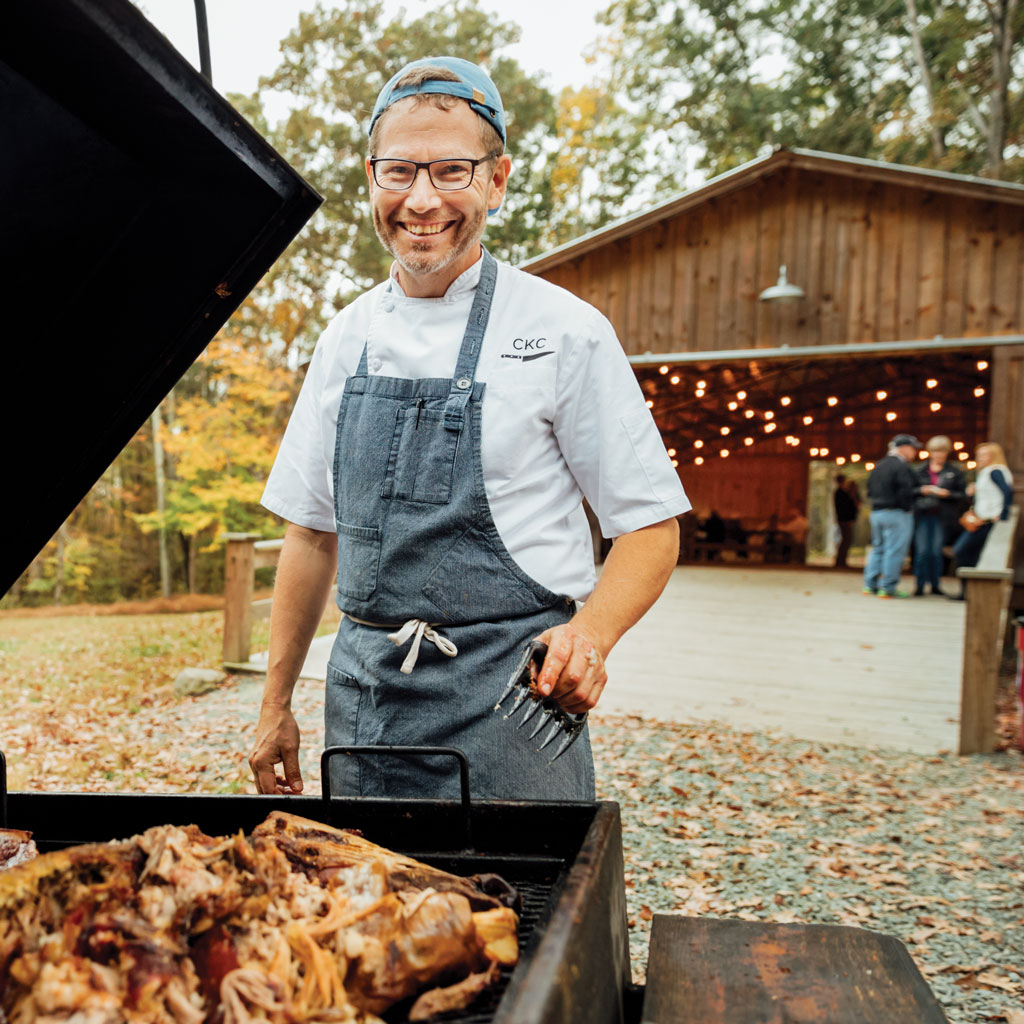 Chef Kevin Callaghan has turned a down-home get-together into an event for the national stage. Salt & Smoke festivals have been held everywhere from Quebec to Colorado. “You don’t have to be from the South to appreciate the food, the feeling of togetherness,” he says. photograph by Charles Harris

What started as a small party among friends is now a full-on festival called Salt & Smoke. But while the guest list has grown over the years, the idea behind the event remains the same. “That first party, it just sort of turned into a shindig,” Callaghan says. “We see it as a celebration of the end of the season and the deep traditions in North Carolina.”

These days, the get-together is held at Rock Quarry Farm, not far from that first field. In addition to the buckets of oysters and the local beverages, there’s also a whole hog cooking in a smoker, bluegrass bands, a photo booth, and a fortune teller. There’s even a roast-your-own s’mores bar.

“There’s something about ‘tradition’ that can sound old-fashioned somehow, but we wanted it to be fresh, new, fun,” Callaghan says.

Preserving the state’s food traditions — the community gatherings and parties that have long surrounded oysters and barbecue — is important to Callaghan, and so is sharing them with others. Callaghan doesn’t know all of the faces around the fire, but that, in his opinion, is the whole point.

“I think that’s what makes me so excited,” Callaghan says. “Food is something that unites us. We wanted this to be something where people realize, ‘We may be different, but boy, oh boy, we all loved that food.’”

For Camille Andrews, owner of Rock Quarry Farm, hosting Salt & Smoke at the homestead is a natural fit. The evening is all about a community connecting over food, just as North Carolinians have done for generations, just as Andrews’s family has always done. “Eating whole-hog pork with cornbread and collard greens is just like the meals my ancestors cooked, as well as the folks in this house and the families still living on the land,” Andrews says. “Growing up, my husband’s family had the opportunity to slaughter pigs in the fall with men in the community. They would make a weekend of it, and then would pack freezers with that.”

For Callaghan, hosting Salt & Smoke here feels like destiny. “Camille’s family, the Andrewses, they’ve been around here forever. And a few years ago, I found out that my family moved here in the 1600s and helped settle this area, White Cross, where Rock Quarry is. So our families probably knew each other and worked together back then,” Callaghan says, laughing. “It feels a bit like fate.”

After the death of her husband in 1995, Andrews needed a fresh start. A longtime resident of Orange County, she began searching for a new place to live, close to her home in Carrboro but a little farther out in the country, where she’d always felt a sense of peace. It was then that she found the 14-acre homestead. “It was run-down, had not been lived in for years, but as soon as I walked up the long drive and saw the house, the trees, the outbuildings, I knew I was in love,” Andrews says. “Everyone told me to tear it down and start over. But, I thought, it was just like me: I may be starting over, but there’s something so rich in my past, too. I just needed to restore it.” 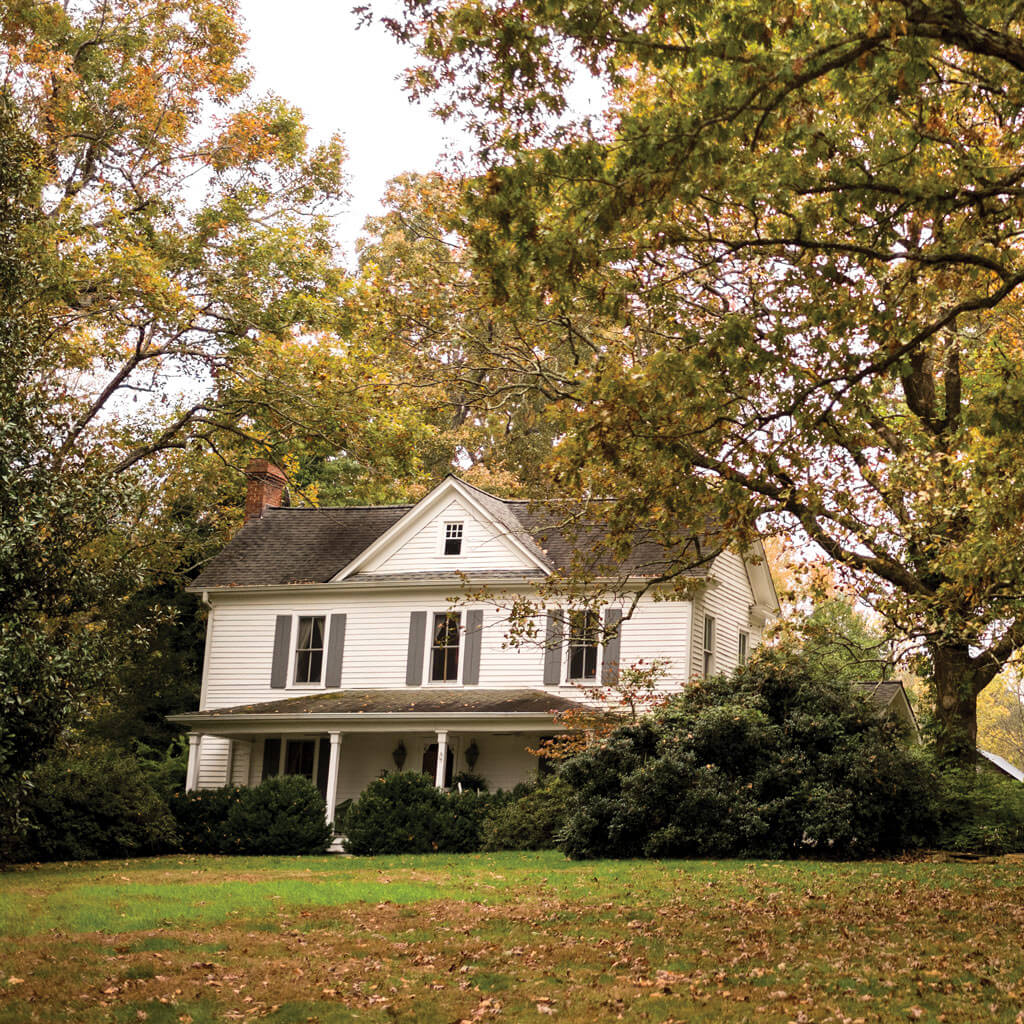 Soon, her children joined her, and the family spent countless days rebuilding, clearing the land, and painting the house. Later on, when night fell, they’d build a bonfire and cook a meal outside as they rested in the quiet. Slowly, the property became Rock Quarry Farm, named after the quarry that was once located on the land, which produced quartz that lined NC Highway 54 in the horse-and-buggy days.

Inspiration came to Andrews from years of Sunday drives out in rural Orange County with her husband. “Corncribs, sheds, small barns, gardens, fences,” she says. “All along, the restoration grew out of my desire to keep the heritage of this North Carolina homestead.” 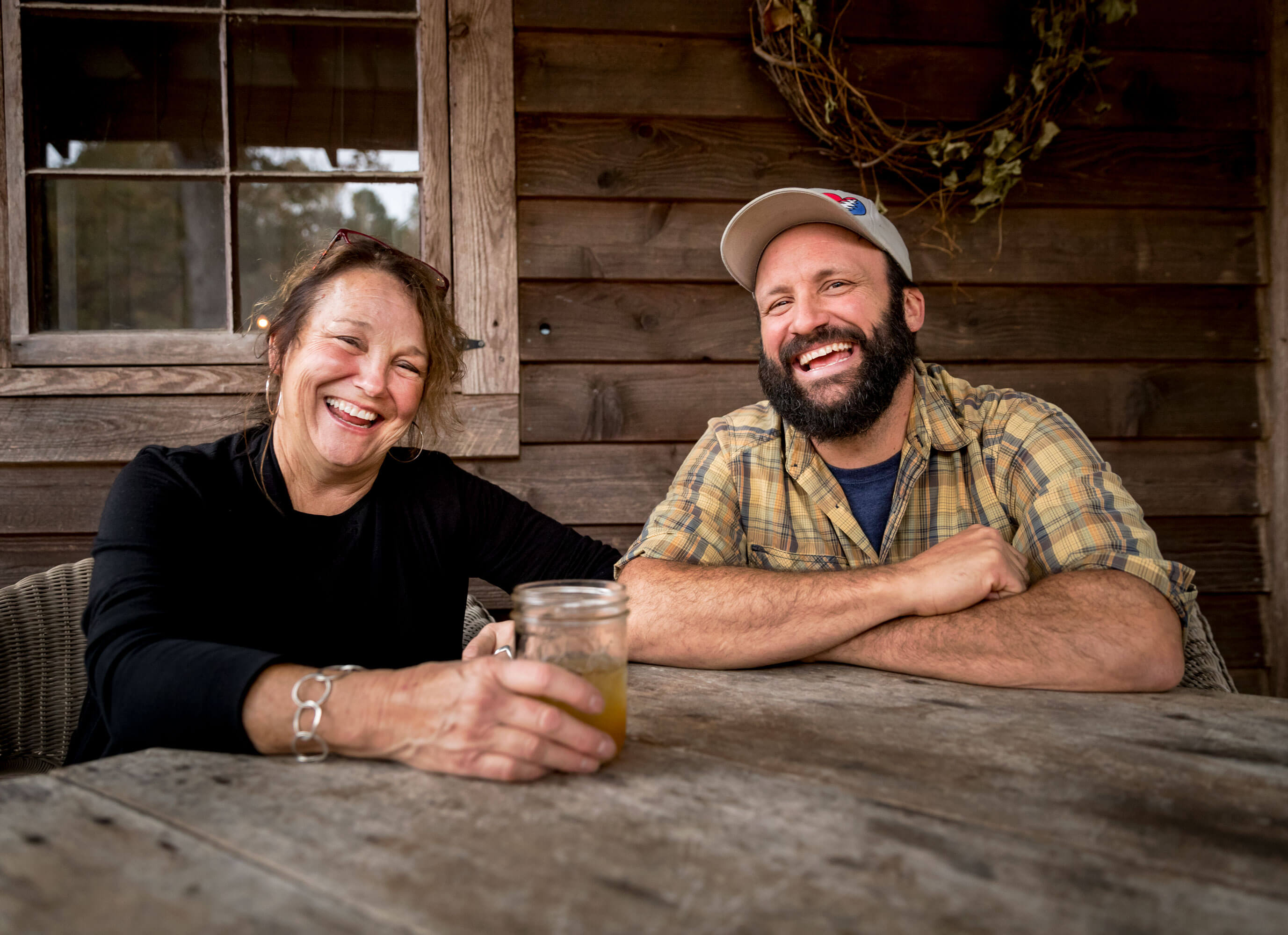 Mother-and-son team Camille and Miles Andrews turned an abandoned homestead into a warm, inviting gathering place. The sign in Camille’s kitchen reads: “May the warm winds of heaven blow softly through this house!” The Andrewses believe they do. photograph by Charles Harris

Andrews’s eyes light up as she leans back into a wooden chair and looks out at the people eating, laughing, dancing. “You feel the past here. You smell the food cooking, the forest trees turning over into fall, smoke from the cooking fires,” she says. “It’s hard to find that in any other setting.”

Callaghan agrees. “Seven years in, it’s all about this place. It’s about the wonder of what grows here, the diversity of the food, the people who want to participate,” he says. Later in the evening, he’ll finally have a chance to set down the shucking knife, to watch the people who’ve come here come together, and to make a little magic around a fire on a chilly Carolina night.