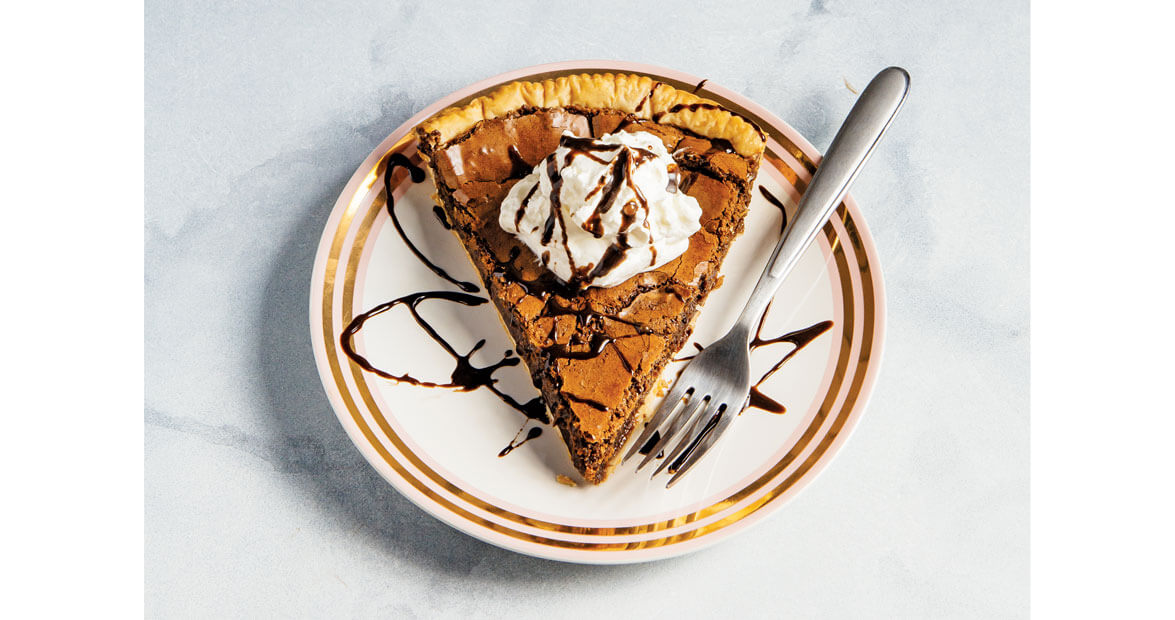 There are no telephones or take-out menus at B’s, but there is plenty of whole-hog barbecue, cooked to tender perfection and doused in an eastern-style sauce. A word of advice: Get there early. 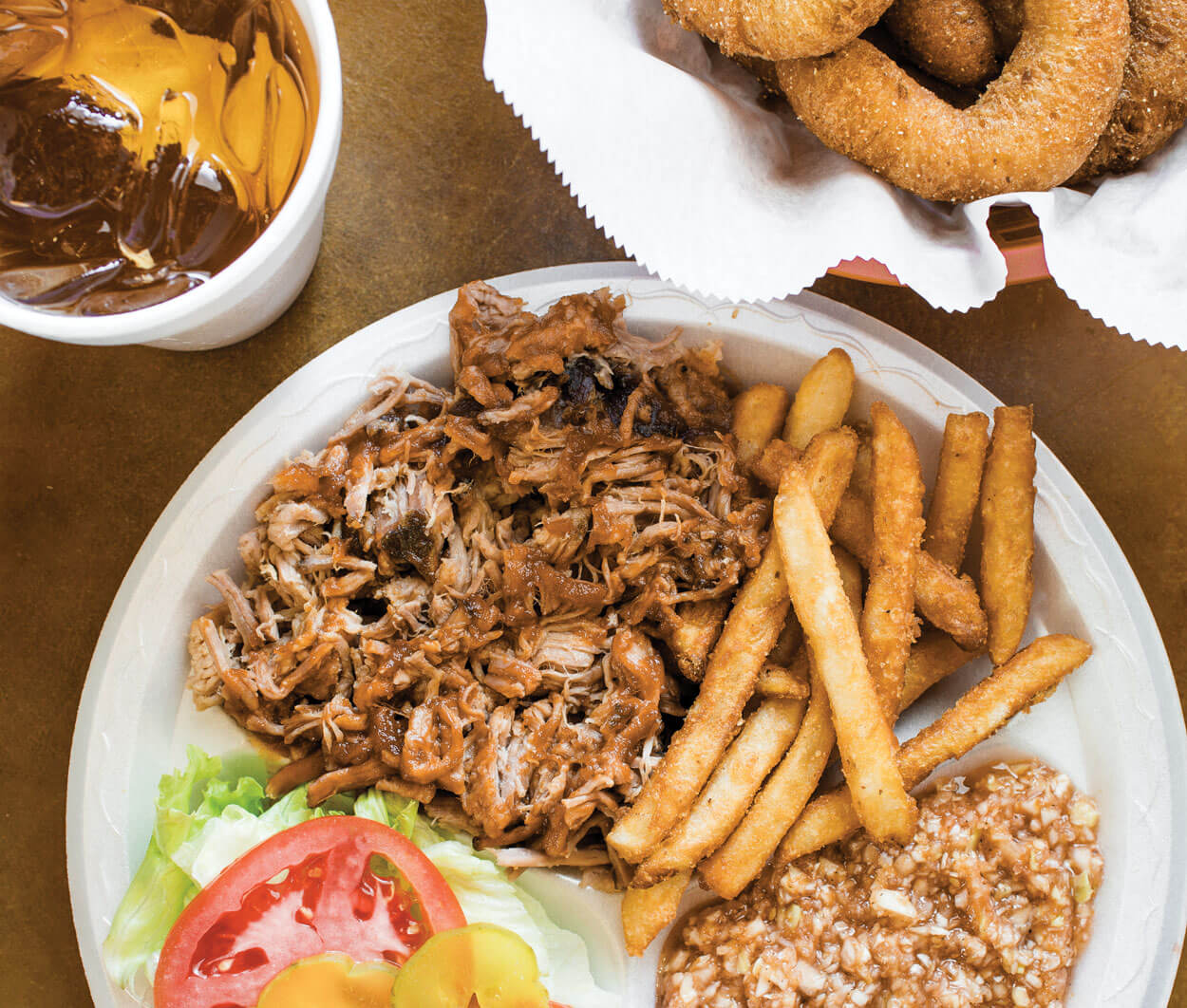 At Red Bridges Barbecue Lodge, you will want to order the ’cue, but don’t forget the perfect sides — sweet tea and hush puppies. photograph by Johnny Autry

At this legendary Piedmont joint, the meat is the thing: pulled from slow-roasted pork shoulders and enhanced by a dark, thin sauce — or “dip” — that is neither too mild nor too fiery.

Good homemade biscuits require a lot of hand-holding, and the famous, hoop cheese-stuffed cathead biscuits at Flo’s are no exception. It takes two hands to make them, and two hands to eat them.

Baked in a graniteware bowl and sprinkled with delicate flecks of hand-harvested sea salt, Kindred’s milk bread is more than a mere loaf. Warm and pillowy, sweet and salty — it’s pure magic. A hug, if you will, in carbohydrate form.

Sure, you can find it around the world, but drinking a cold glass bottle of the sugary, amber-hued soda feels far more refreshing — and authentic — in the New Bern pharmacy-turned-Pepsi Store where it was invented.

Driving up to this brewery is like arriving at a Disney theme park. And, OK, yes, the company was founded in California in 1979. But in a state filled with amazing craft beer, drinking an IPA at the Biltmore of brewing is an experience.

We can’t help but feel a little possessive when it comes to this celebrated soda. The bubbly, burgundy nectar, invented in Salisbury, has been a cherished Tar Heel treasure for more than 100 years.

You’ve seen the lighthouse labels, the billboards while beach-bound. But there’s nothing like sipping sweet, chilled wine made from our state’s native muscadine grapes at the largest and oldest winery in the South. 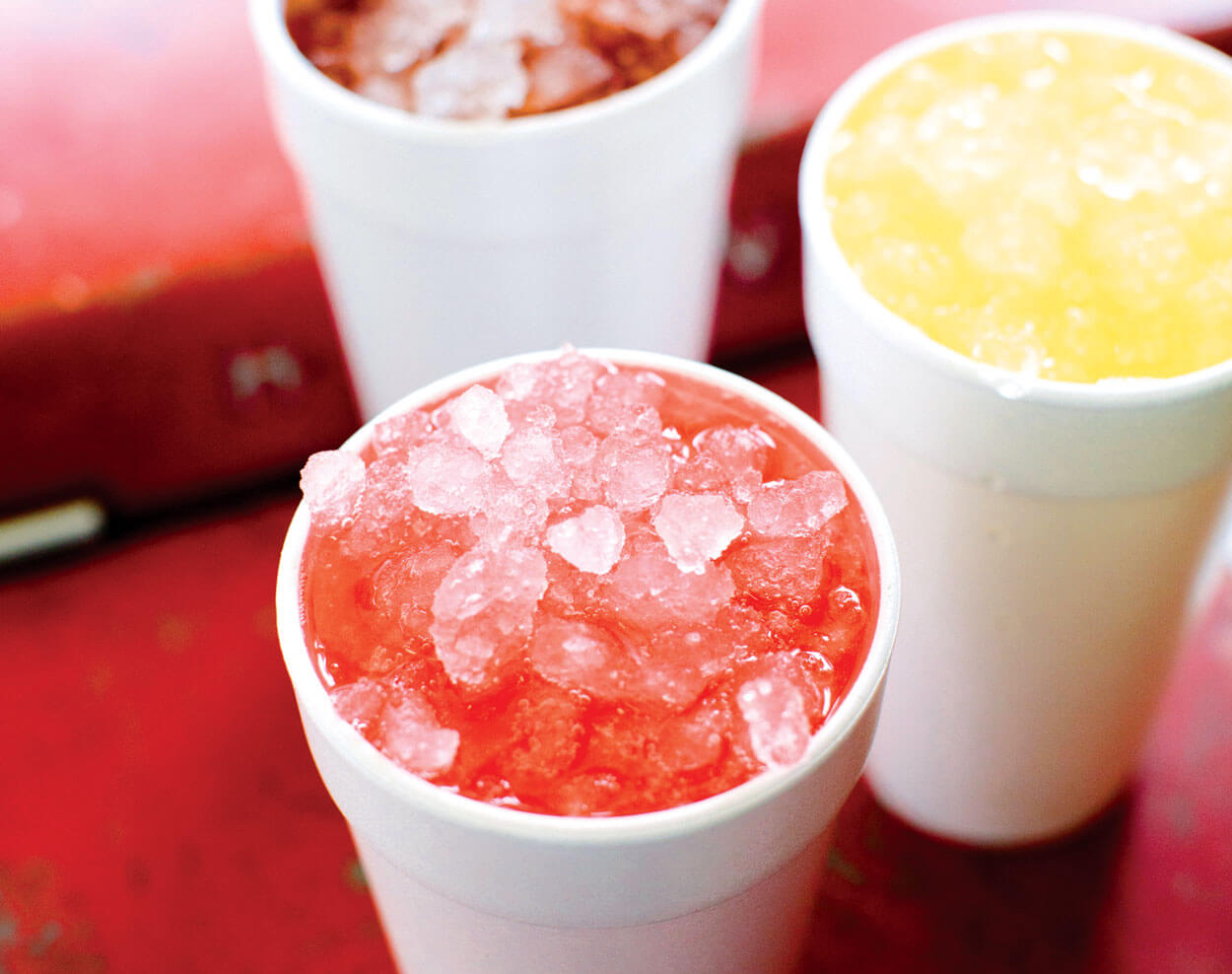 Sutton Drug Store’s icy fruit ’ades are the perfect way to cool down on a hot summer’s day. photograph by Anagram Photo

The icy fruit ’ades at Sutton’s are a tradition that goes back to the founding of the store in 1923. Perch yourself on a stool and sip a ruby-red cherry limeade.

Beep beep! Grab a cuppa at this Asheville landmark — a bright red double-decker bus that traveled to the U.S. from London in the 1970s and began its new life as a coffee shop in 1999.

“The Coop” has been dishing out the same light and crunchy fried chicken since 1962. Service is carryout only, but when customers can’t wait for that first savory bite, they simply feast inside their cars parked along the street.

The best place to satisfy a hankering for fast-food fried chicken, perfectly seasoned fries, and sweet tea? Whichever Bo’s is closest. Forty years ago, Bojangles’ opened its first location in Charlotte. Now, it’s got legions of fans as far away as Honduras.

The fried chicken at Keaton’s is dipped in a secret, magical barbecue sauce — hot or mild — and served with a white bread bun. It’s impossibly delicious … if you can find the place. Hint: Just drive until you’re lost. 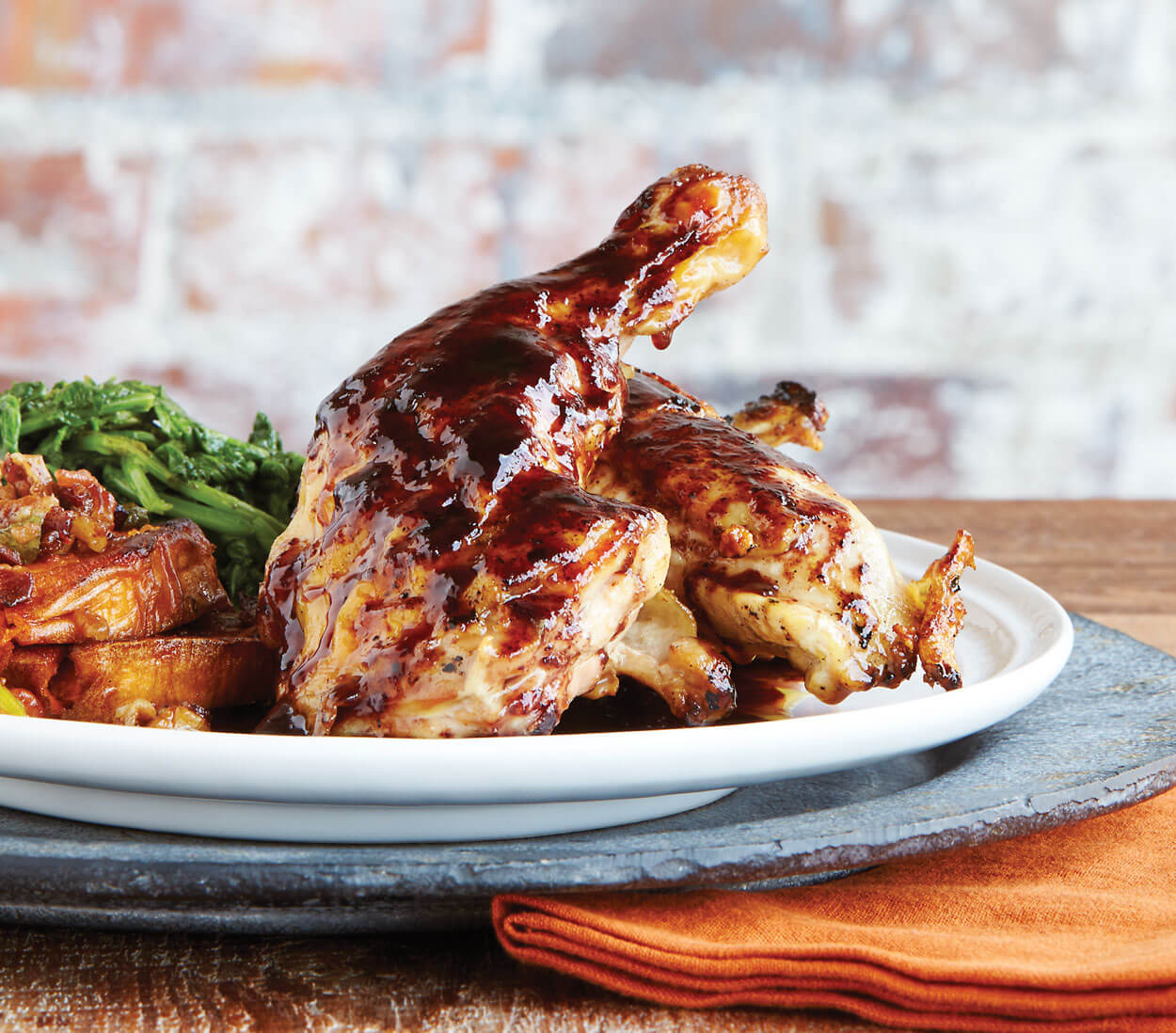 At the Chef & The Farmer, you can’t miss this signature dish. photograph by Stacey Van Berkel

More than 60 years ago at Miller’s, hamburger met pimento cheese. The rest is history. It’s no longer the only pimento cheese burger around, but the faithful — who don’t mind spreading it on thick sometimes — will tell you it’s still the best. 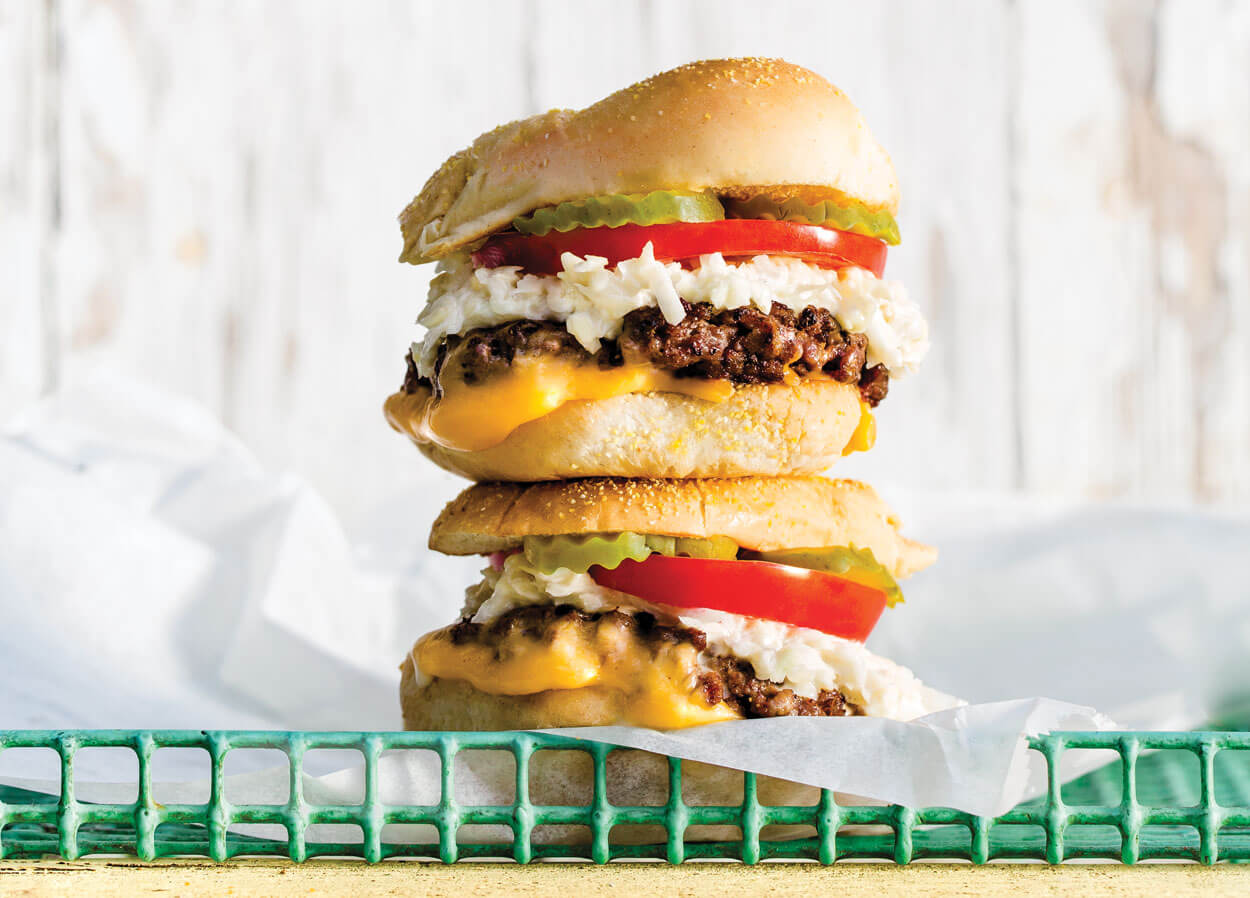 At the Shake Shop in Cherryville, a signature Lottaburger is stacked with slaw, tomato, pickle. photograph by Tim Robison

The signature meal at this hole-in-the-wall joint has always been a Lottaburger: two burgers cooked on a flattop grill and served inside a hoagie-type bun. With slaw, tomato, and pickle. Only. 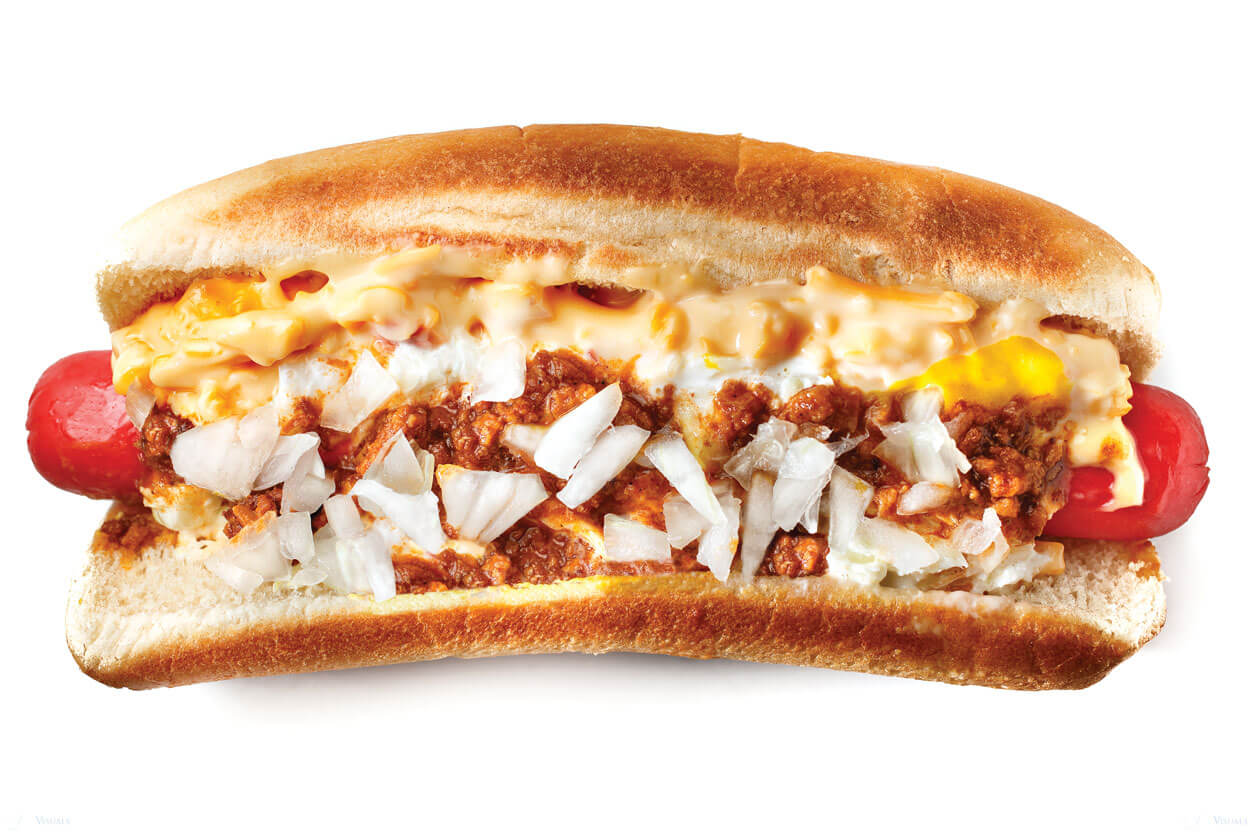 At Kermit’s in Winston-Salem, a cheese dog means pimento cheese. Who could resist? photograph by Jerry Wolford

People come to Kermit’s for a taste of nostalgia. They long for the warm buns, the freshly chopped onions, the coleslaw, and the homemade pimento cheese. And they know just what to do when they arrive: drive up to the curb and flip their lights, or head inside for the constant soundtrack of the sizzling grill.

Bill’s is takeout only. There are no fancy condiments. Just order a bag full of white paper-wrapped, oil-fried, nuclear-red hot dogs “all the way” — that’s with special spicy chili, onions, and mustard — and be prepared to share.

Eating at the original Snoopy’s Hot Dogs is a Raleigh rite of passage. Since the restaurant opened in 1978, folks have been lining up for a hot dog served eastern Carolina-style: mustard, onions, and chili, steamed in a bun.

Some customers come to Yum Yum Better Ice Cream for — you guessed it — the ice cream. It’s legendary. But so are the hot dogs, served six ways in a warm bun, each boiled weenie as red as a Christmas tree light.

A Wilson landmark, Dick’s Hot Dog Stand has been serving up dogs since 1921. And, pssst, it would be a mistake to leave without trying the chili, made from the same recipe for nearly 100 years.

There are no “show dogs” here. What brings people are charred dogs — the restaurant’s motto is “We burn ’em for you” — topped with mustard, onions, chili, and homemade slaw. The chili is so good that it even inspired a no-ketchup rule. You wouldn’t want to cover up all that flavor, would you?

No substitutions. No choices. And most definitely no menu. The Beefmastor serves rib eye — and only rib eye. Customers are greeted with a slab of meat on a wooden butcher block. They make a selection. Then, they eat their meal with a baked potato and Texas toast.

It takes a reservation made well in advance to score a booth in the low-lit dining room of this storied steakhouse on a Saturday night. But once you’ve settled in, enjoy the complimentary cheese spread and crackers, a salad, the pressed garlic bread, a martini. Then, pick your steak.

Tasting a Stump Sound oyster feels like taking a brisk dive into the chilly Atlantic and surfacing with a snootful of surf. It tastes exactly like the ocean, its brine, its sea life — and that salty taste puts them at the top of oyster-lovers’ favorites. 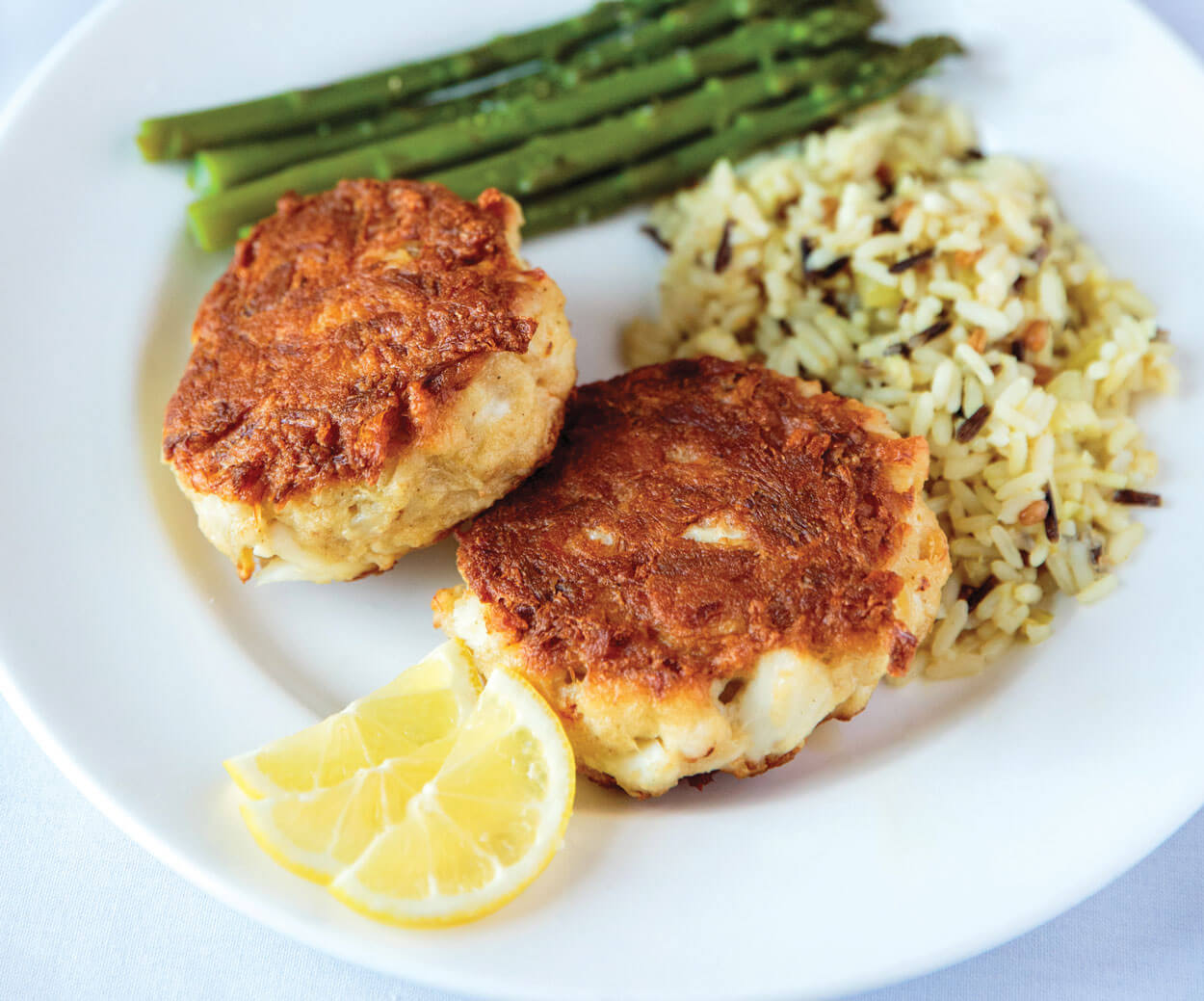 Change is overrated: The original-recipe crab cakes at Owens’ keep tourists and locals hungry for more. photograph by Anagram Photo

The dinner menu at this Outer Banks restaurant, open since 1946, remains a time capsule of seafood classics. And none are more beloved than the signature crab cakes and hush puppies.

At Big Oak, the star of the walk-up window is the shrimpburger: small, very lightly battered shrimp; a little tartar sauce and coleslaw; a little ketchup. It’s a honey-pack-the-car-I-need-one-today meal on a bun.

At El’s, the drive-in hasn’t given way to the drive-thru. Since 1959, carhops have been delivering a bagged bounty — shrimp and oyster plates, cheese dogs, the signature Superburgers — right to your window. 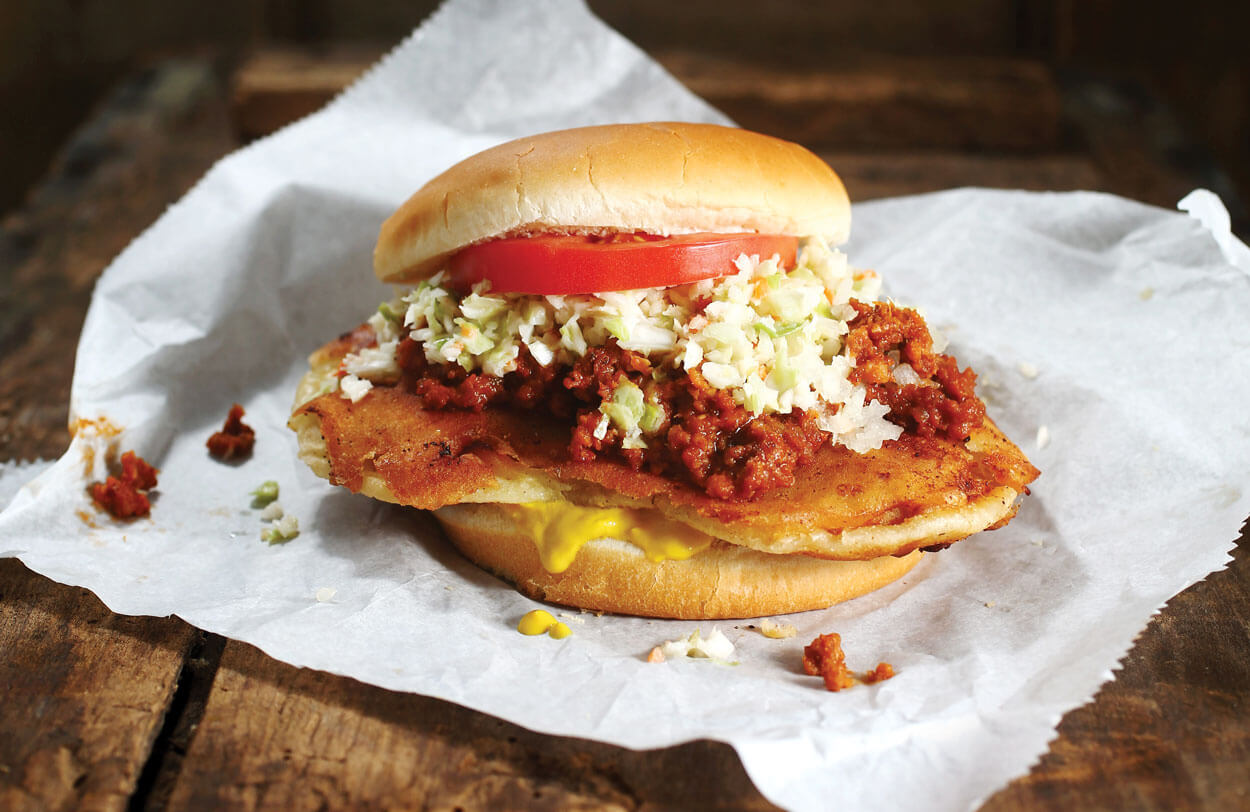 It’s the only Mount Airy business ever mentioned during the eight-year run of The Andy Griffith Show, but it’s Snappy Lunch’s pork chop sandwich that endures. Fans will drive for hours to stand in a line so they can eat, on a bun, a piece of fried pork bigger than a dessert plate.

Shelby has claimed livermush since at least 1933, when two local businesses — Mack’s Livermush and Jenkins Foods — got their start. Try the regional delicacy on a sandwich at the Shelby Café. Think of it as a softer, richer sausage patty.

Mount Airy’s (other) famous sandwich? Ground-steak: ground beef thickened with flour and water, served on a toasted, buttered bun, and topped with coleslaw, tomato, chopped onion, and mayonnaise. It’s like a sloppy joe without the ketchup.

Merritt’s calling card is the B.L.T. — a destination sandwich. And while a standard B.L.T. has a recipe only three letters long, the Merritt’s version comes in three sizes: single, double, and triple. The numbers correspond to how many layers of bacon, lettuce, and tomato the sandwich contains. Dreams do come true. 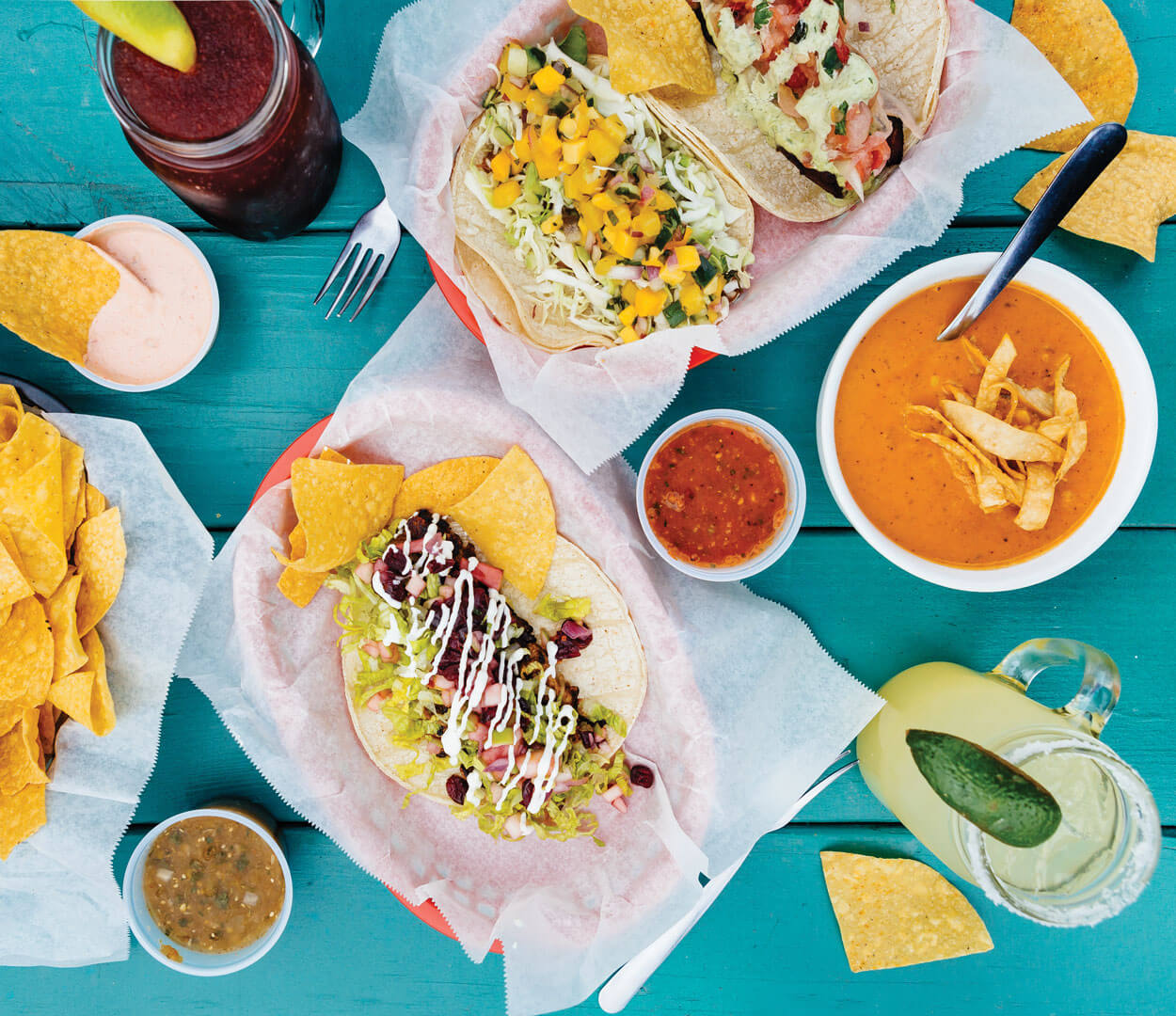 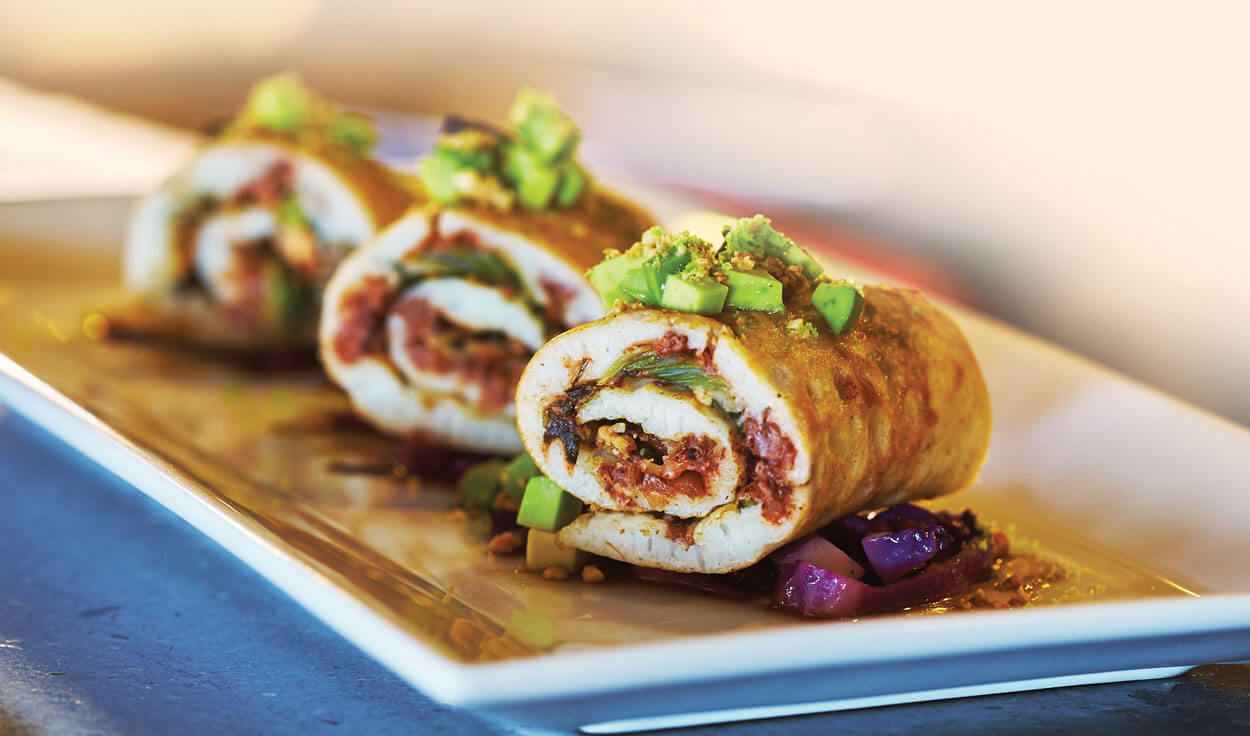 Around the world on a plate: Plant’s take on the Indian dish uttapam, a lentil and fermented rice pancake, includes house-made kimchi, peanut-and-sesame chutney, and avocado. photograph by Bill Lusk Studio

Here’s what you won’t find at Asheville’s vegan mainstay: meat, dairy, or eggs. You will find a creative menu unlike any you’ve ever seen — or tasted. Here in the Barbecue Belt, it’s perfectly fine to be skeptical. But first, take a bite.

You’ll feel like a real-life Charlie at this bean-to-bar chocolate factory. The golden ticket: chocolate bars that range from classic milk and dark chocolate to flavors like blueberry and pink peppercorn. 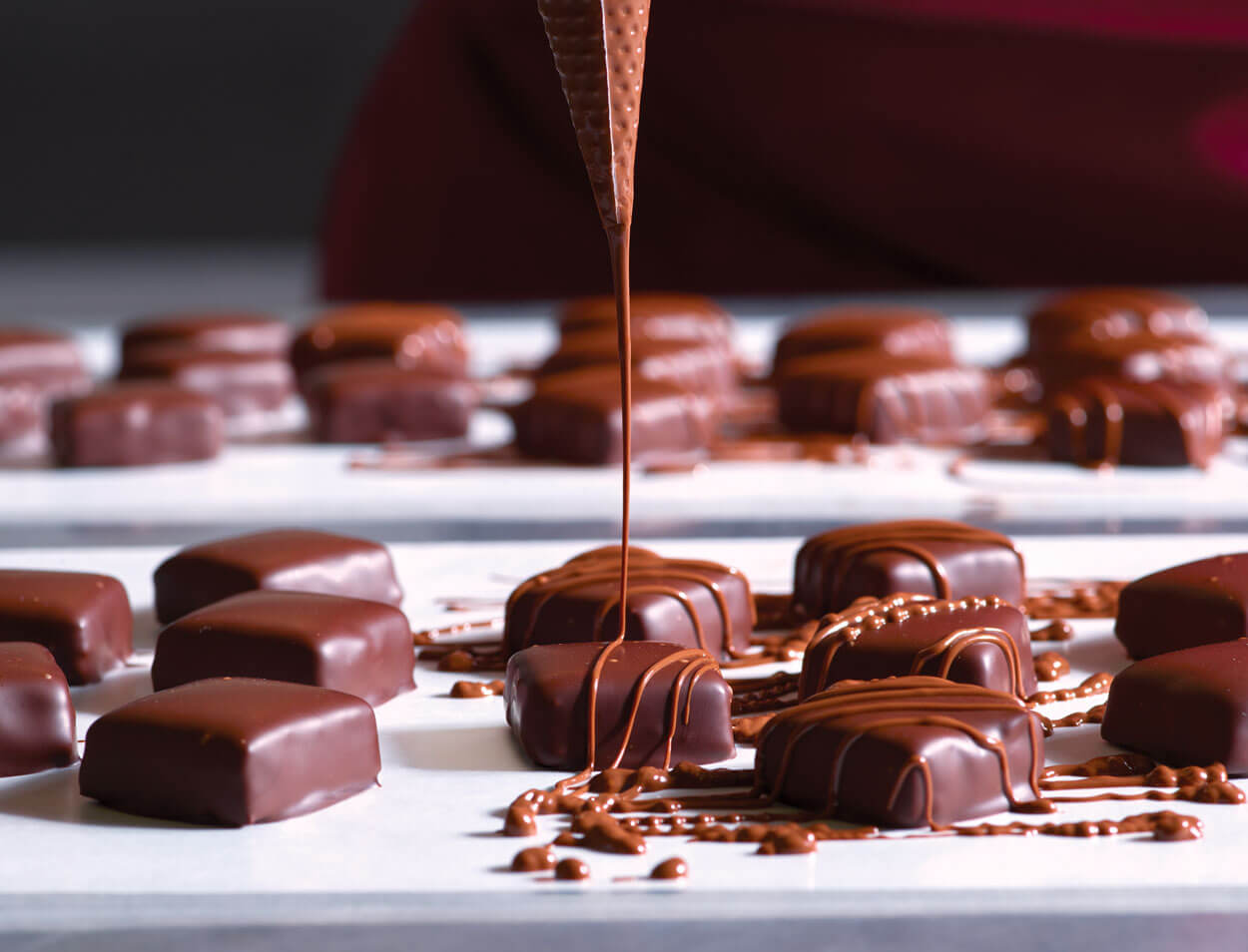 Cocoa beans from the Dominican Republic become chocolate bars and gelato, espresso brownies and salted caramel tarts at this “visible factory” in Winston-Salem. Take a peek into the process, and, of course, sample the delicious creations.

French Broad roasts, cracks, grinds, and tempers all of their chocolate in small batches. The result: unique offerings like chocolate habanero, strawberry balsamic, lavender honey, and sorghum caramel truffles, made with super-local ingredients.

The Carolina Beach Boardwalk has gone through its share of changes, but one thing about it has stood the test of time: the “Sweetest Place on Earth” and its warm doughnuts with a flaky glaze.

The glowing sign is a siren call, a thoroughly North Carolinian expression of “carpe diem.” The glazed, pillowy-soft doughnuts, invented in Winston-Salem in 1937, used to be our secret … but we can share.

Why is it called sonker? No one knows for sure. But when locals hanker for warm, juicy fruit — peach, sweet potato, cherry, and berry — baked into a sweet crust, they know just where to go.

Sure, the grilled steaks are great. But we’re here to talk about the legendary chocolate chess pie: Its signature crackly, crusty top is drizzled with chocolate syrup and dolloped with whipped cream.

Chef Emeritus Bill Smith wanted to re-create the lemon pie of his childhood on the coast — with some tweaks. Whipped cream and flaky salt instead of meringue; saltine crust instead of Ritz Crackers. He called the dessert Atlantic Beach pie. It was a hit. Then it went viral. Now, it’s legendary.

At Chapel Hill fixture Mama Dip’s, the beloved sweet potato pie has a custardy filling made with milk, eggs, and melted butter, plus warm spices like cinnamon and nutmeg. The sweet potatoes are boiled until tender, then mashed until smooth. 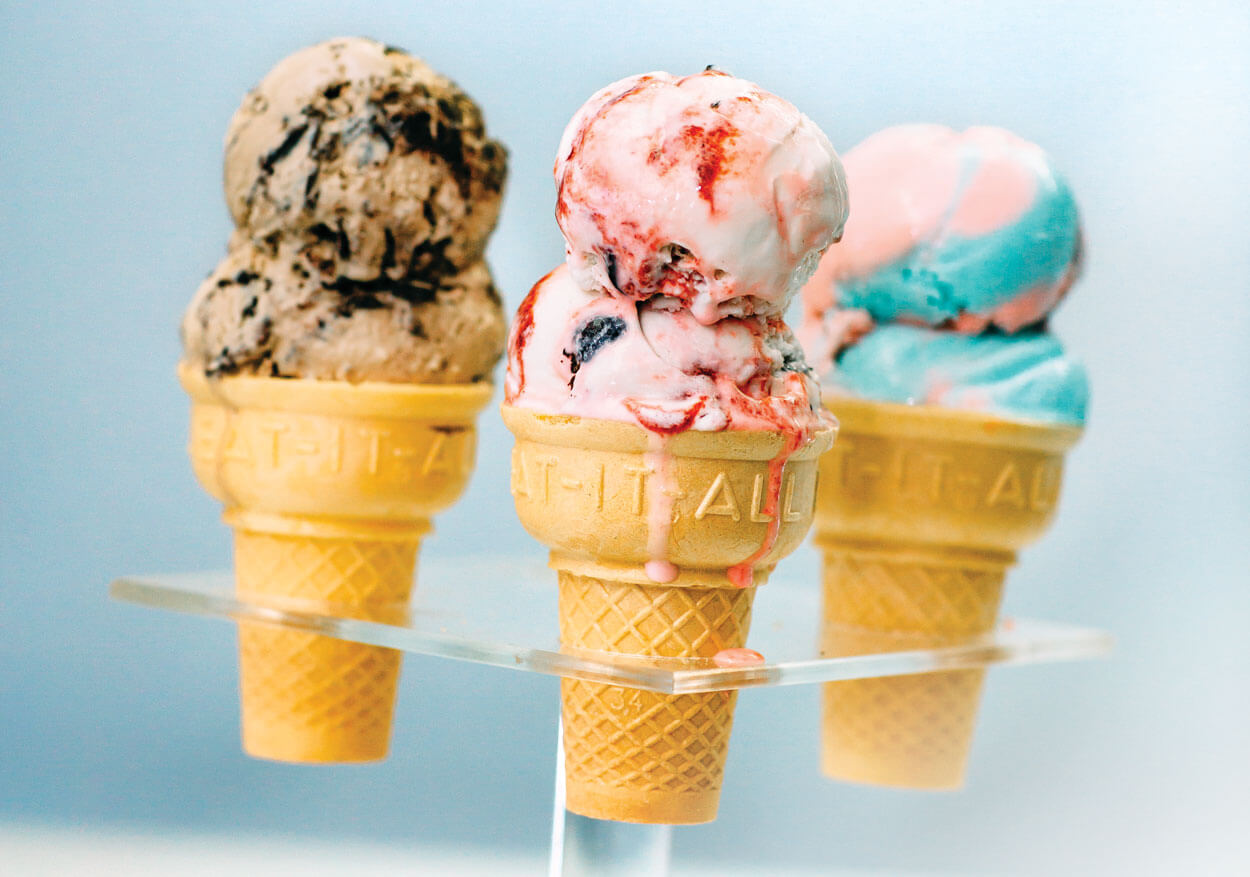 The bulbs in the Dots sign (left)don’t burn anymore, and there are cracks in the iconic cone, but it’s all part of the place, as much as the cones topped with homemade ice cream. photograph by Tim Robison

Dots has been a sweet summer standby for nearly 50 years. Scoops of German chocolate, cherry cheesecake, and rainbow ice cream are a reason to save room for dessert.

Louis Coletta’s family has been in the ice cream business since 1915. Today, he continues the tradition at Tony’s. One flavor that often takes newcomers by surprise — grape — is a nod to the Colettas’ Italian heritage.