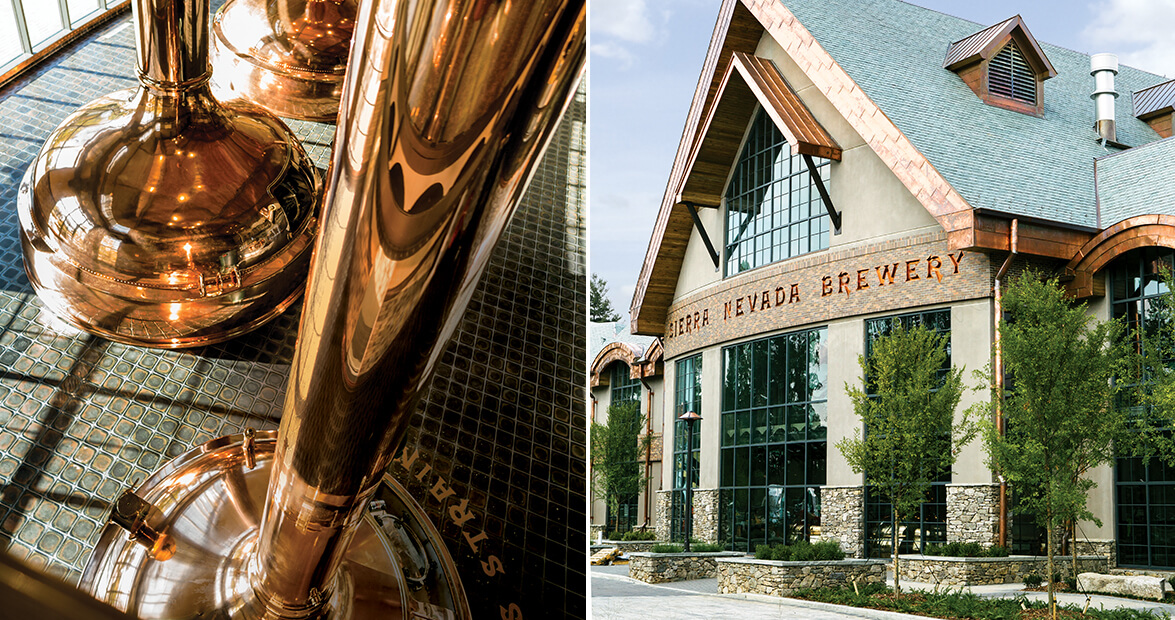 Driving up to the Sierra Nevada brewery is like driving up to a Disney theme park, a comparison that becomes obvious when you roll through the front gate with its cartoon-like sculptures of grain. The road winds up a hill through the woods, reaches a crest, and lo! There it is: A gigantic mountain lodge resembling a beer-themed Cabela’s. In the front are rain gardens full of shrubs and river birch, with huge cisterns to catch the rainwater that runs off the massive, pointed roof. Solar panels hang over the parking lot, which isn’t paved, but loosely tiled with bricks to let water through. Every so often, little signs inform you just how good all of this stuff is for the environment.

And we’re not even inside yet.

Indeed, the environment here is perfect for Sierra Nevada, which started brewing back in 2014 on this spot in Mills River, just across the woods from the Asheville Regional Airport. You can truck in the hops and barley from anywhere, but not the water. The stuff that comes up from the wells on site here is pristine, bubbling from the aquifer at 200 gallons a minute. Sure, it’s not created from melted snow, which was critical to the water at Sierra Nevada’s original brewery, out west in the Sierra Nevadas. This stuff has to be hardened, actually, to match the original. It’s also used as sparingly as possible. Only 3.5 gallons of water are used to make every gallon of beer — a shockingly low ratio in the brewery world. The whole building is certified LEED Platinum, which means, in short, that everything inside and out is really, really efficient. 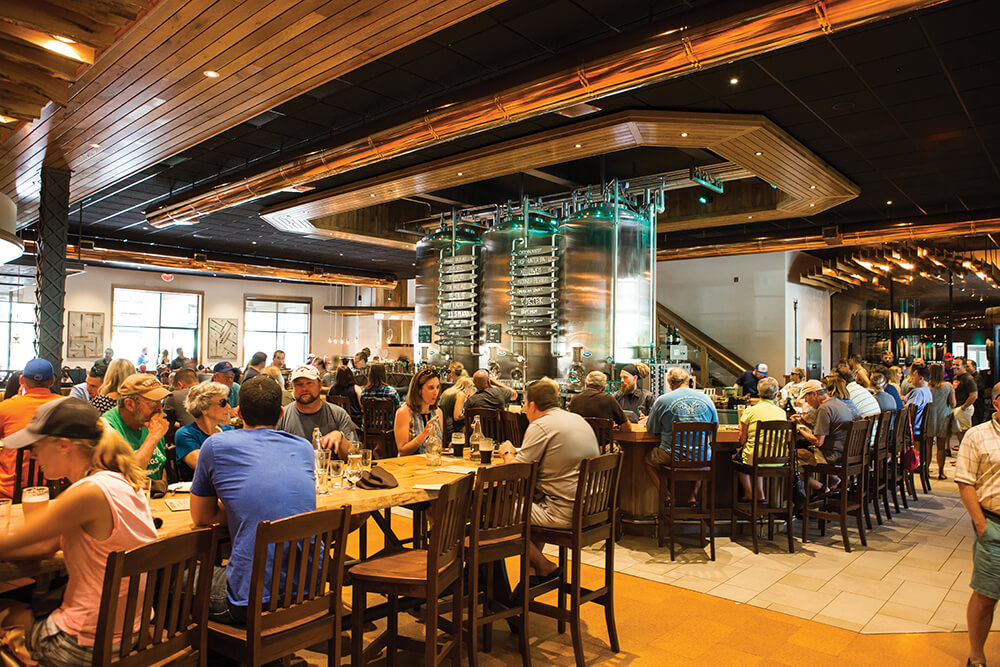 The Taproom serves upscale Southern food and has nearly two dozen beers on draft, some of which are available nowhere else. photograph by Tim Robison

Sierra Nevada, as craft beer companies go, is also really, really old. It was founded in Chico, California, back in 1979, making it practically 200 years old in microbrew years. Thanks to the growing popularity of its signature green-labeled Pale Ale, created with whole-cone hops, the company needed to expand on the East Coast. Sierra Nevada decided to go big. And so, here we are. The Asheville area has dozens of craft breweries, big and small, but this one is the most luxurious. The Biltmore of brewing, maybe.

This one is the most luxurious. The Biltmore of brewing, maybe.

There are tours here all day long. Some are guided, and free. Others are guided, and are specifically for beer nerds, and cost $30. Walk upstairs, to the self-guided area, and, oh man, everybody’s a tour guide. Hops this. IPA that. Where there are not self-appointed guides, there are know-it-alls and jokesters. One guy, leaning over a railing above the brewhouse, watches a worker disappear into a massive lauter tun. “You have to drink your way down?” he asks, waiting for the laughter. When it doesn’t come, he snaps a smartphone pic of the whole scene.

Near the middle of a very long hallway, there’s a tasting room where visitors over 21 get a free sample. “You can take a coaster with you,” a bartender says, and plenty of people stuff them into pockets and purses.

Spoiler alert: There are many bars here, but nothing’s quite like the big taproom downstairs. It’s packed. Most of the people here come in from out of town, because the brewery is halfway between Asheville and Hendersonville, not far from Interstate 26. The drinkers are dressed like models from a Patagonia catalog. One guy, in a trucker hat and beard, orders a Stout of the Union, a dark beer. The couple next to him is intrigued. “First time here,” the guy confesses, before going on to opine about the stout’s whiskey-infused character. Know-it-all.

But know-it-alls are good, because they care. We tend to think of craft beer as this intimate product that provides a level of closeness you can’t get from a can of Bud Light. And yet, at some point, when little beers become stars, the making of them has to become more industrial, with huge copper tanks and production floors full of bottling lines, forklifts, and miles of piping. This Sierra Nevada brewery, really, is meant to buy back some of that early magic, when a beer wanted so badly to be more than regular-old beer. And so the brewery comes with 215 acres of land with mountain biking trails, patios, gardens, an amphitheater, an airy brewhouse, and a bustling taproom. Yes, all of this can seem like a bit much, this over-the-top temple to hops. But strip it all away, and you’re still left with great beer. And if that’s all you’re left with, you’re in good shape.