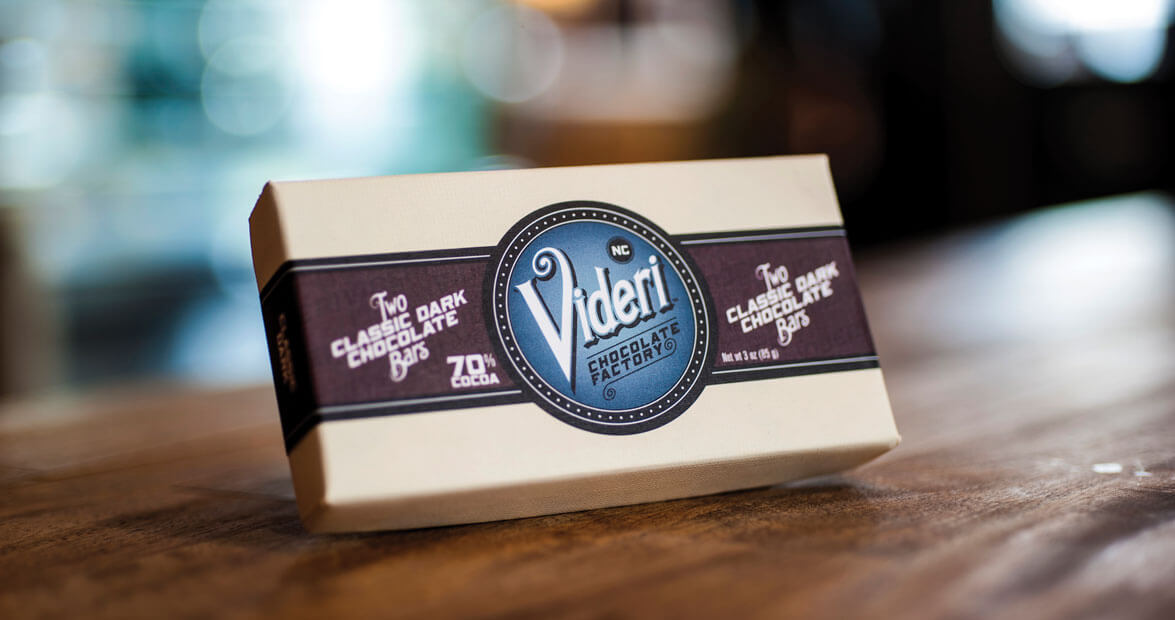 If it smells like brownies in downtown Raleigh’s warehouse district, then it’s Tuesday: roasting day at Videri Chocolate Factory.

Inside the exposed-brick and wood-beamed building, at the center of the action, is owner Sam Ratto, who’s roasting cacao beans by the bucketful. Only a waist-high brick wall separates Ratto and his 23-kilo roaster from the lines of local children taking a tour, or customers peering inside the glass-walled chocolate-making room.

One customer, Debbie DeMaris, asks Ratto what he’s doing. He explains that he’s roasting cacao beans. “We wish we could roast every day because it smells so good,” he says.

“It’s a good day to come, then,” DeMaris says. She turns to her husband and holds up her to-go cup. “This is the best mocha I’ve ever had,” she tells him.

Ratto likes the fact that visitors can see the chocolate being made and that they get an opportunity to ask questions. He also savors the inverse: the chance to see people’s reaction to his chocolate as they sit in the factory’s coffee lounge or out on the patio. Tucked inside a former freight depot on the edge of downtown Raleigh, among shops, bars, restaurants, art galleries, technology companies, and the Contemporary Art Museum, Videri is part of a movement to transform what was once the city’s railway and shipping hub. And as a bean-to-bar company, they’re transforming the way North Carolinians think about chocolate, too.

Bean-to-bar chocolate is a niche within the chocolate industry. Most companies that make chocolate bars or candies buy premade chocolate. But bean-to-bar companies source cacao beans, roast them, and turn them into chocolate for bars or confections. By controlling the process, these artisan makers can produce more nuanced chocolate, the kind that gets described with words otherwise reserved for wine: jammy, fruit-forward, citrusy, earthy, and the like. A Videri bar is a far cry from the mild, flat taste of that nostalgic Hershey’s bar: It has the sweet, rich chocolate flavor that you love, but with more depth and a bright finish.

And Ratto makes it possible for customers to see how it all comes together. That desire for transparency was the inspiration for his company’s name, taken in part from the state motto: “Esse quam videri,” or “to be, rather than to seem.”

A counter of their own

Ratto and his wife, Starr Sink, opened the factory in 2011 after career paths that were not so sweet. They met in Southern California, where Ratto worked for a shoe company that catered to skateboarders and dirt bike racers. His job involved driving a 40-foot RV to sporting events across the country. Sink had spent years working in customer service, as a record store clerk, and as a legal assistant at a global fashion house, where she spent her days talking to angry suppliers waiting to be paid. 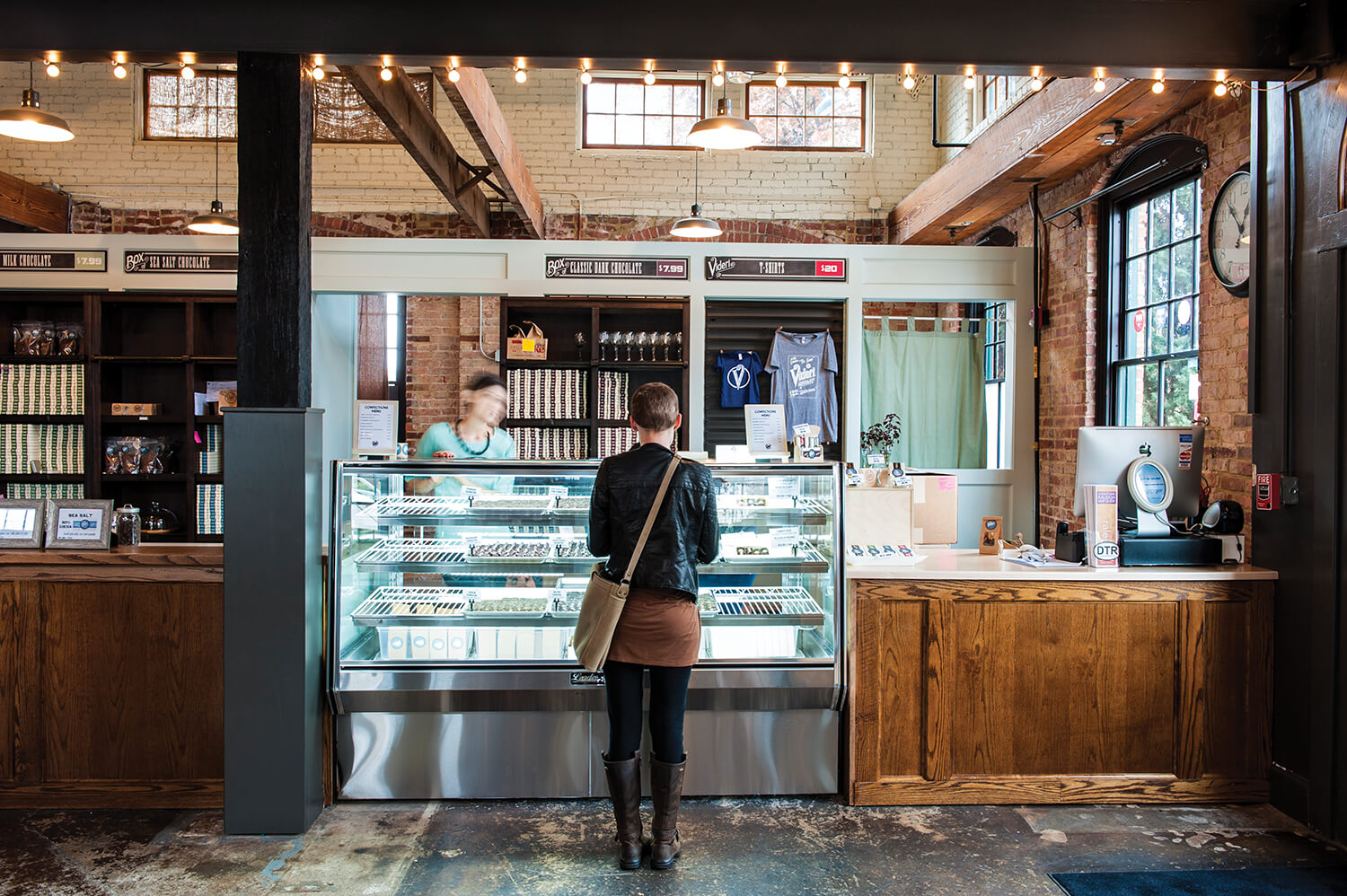 Sweets like strawberry anise ganache, winner of a 2015 Good Food Award, are available at Videri’s counter and on their website. photograph by Bryan Regan

In 2008, at the start of the Great Recession, Ratto lost his job, and the couple decided to move to North Carolina. Sink had grown up in Winston-Salem and fondly recalled a brief time she lived in Raleigh. Ratto, a golf lover, thought he’d study turfgrass management at N.C. State University. They arrived in Raleigh in 2009, and Sink found a job at Escazu Artisan Chocolates, Raleigh’s first bean-to-bar chocolate maker. When the company needed someone to sort beans, she asked Ratto to help. The couple worked at Escazu for a year before leaving, but Ratto soon realized how much he missed making chocolate.

“Sam is such a force,” Sink says. When he first raised the idea of starting their own chocolate business, Sink, who isn’t a natural risk taker, had to get comfortable with becoming an entrepreneur. She says Ratto told her: “I’m born to do this. I dream of it. I need you on board.”

The couple divided their duties: She’d handle customer service and retail, and he’d oversee production. The night Videri opened, in December 2011, they went out for a celebratory dinner, and Ratto told Sink: “I’ve watched you behind other people’s counters for 10 years. Here’s your counter.”

When Ratto and Sink opened Videri, it was just the two of them, plus two other employees. That first year, they roasted seven tons of cacao beans. At the time, there were two dozen bean-to-bar chocolate makers in the country, and North Carolina was home to two of them.

Now, Videri has almost 30 employees, nine of whom are full-time. They aim to roast about 30 tons of beans a year. And bean-to-bar chocolate makers are popping up all over the country.

Videri makes a line of chocolate bars that range from classic milk and dark chocolate to flavors like peppermint and pink peppercorn. The company’s confectioner, Nicole Evans Groth, makes seasonal offerings like blood-orange ginger ganache and sugar plum ganache. Such products are garnering attention, with mentions in GQ and Southern Living magazines and the cooking website Epicurious.com. In 2014, Videri won a Good Food Award for their Ecuadorian dark chocolate bar, the first time a chocolatier won for any product with 90 percent cacao or above. That’s not an easy feat — the higher the percentage of cacao, the less sweet the chocolate is. 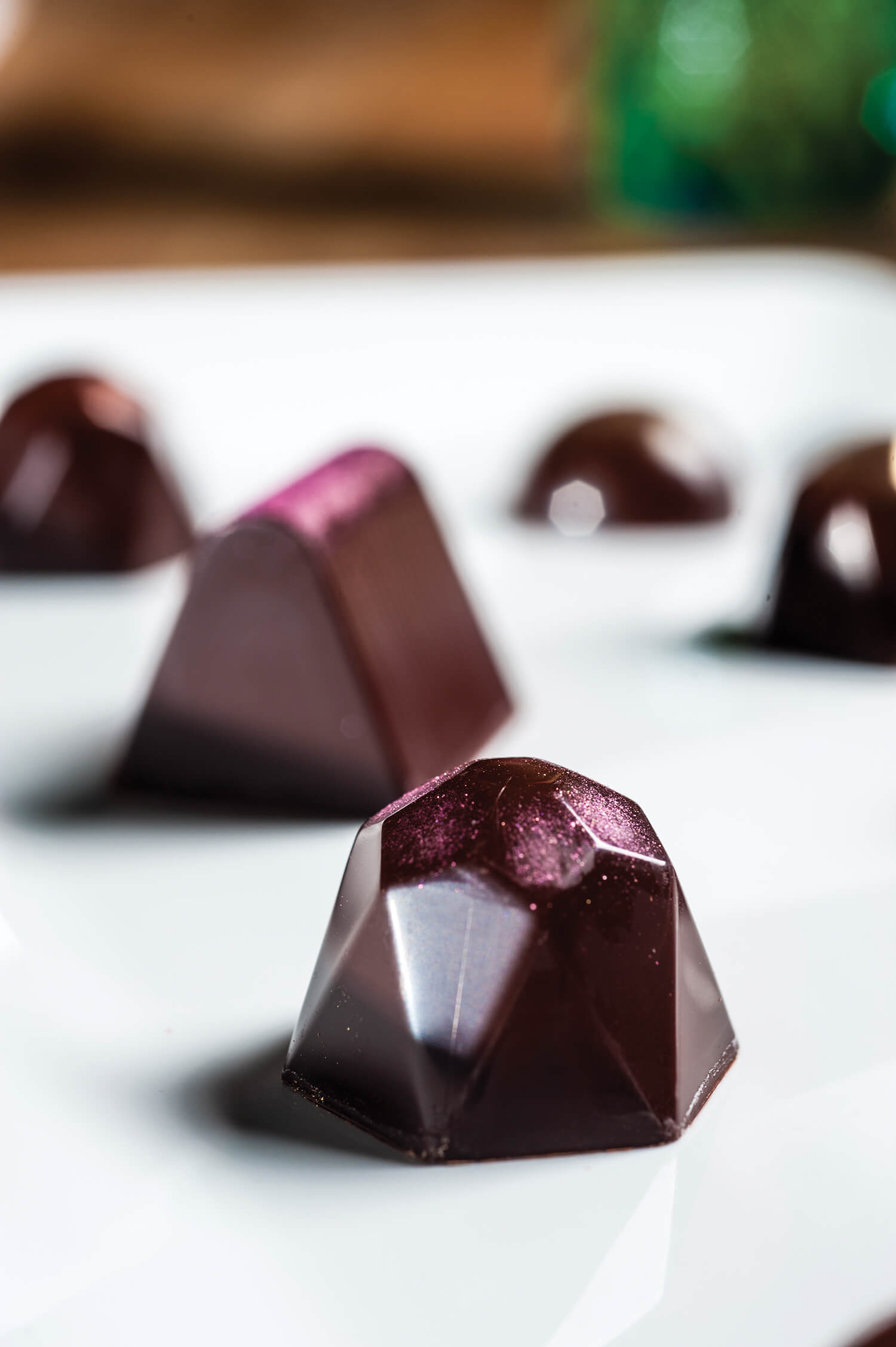 “I love doing it,” Ratto says. “My main concern is doing it more.” His zeal for making chocolate means Videri has achieved his initial goal — to make chocolate so good that it sells itself.

With success comes a challenge: The company needs more space to increase production. Ratto will soon close the factory for a few weeks to begin renovations to add 800 square feet to the facility.

If only all problems were so sweet.