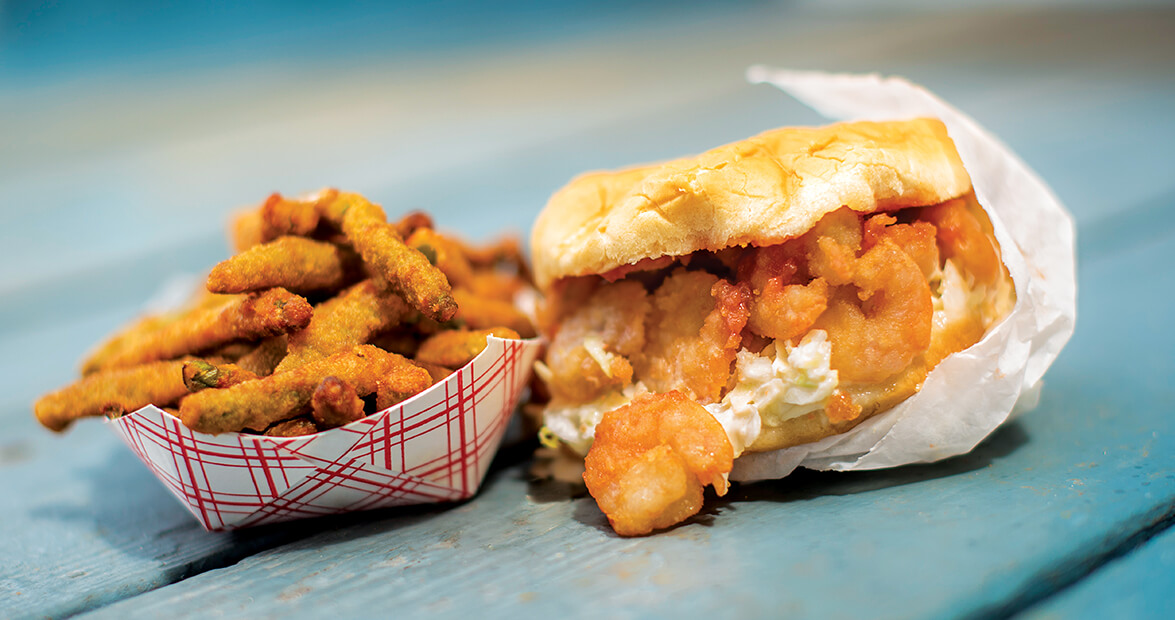 What if I told you there was a sandwich so good you’d drive two hours one way to get it? Or leave the beach early just to stand in line? That you could eat one, but two would be even better? That you’d think about that sandwich every day, long after you tossed its paper wrapper into the trash?

I have that sandwich, and now you do, too.

There’s a tidal pull to Big Oak Drive-In & Bar-B-Q in Salter Path. Appropriate, seeing as how the tiny restaurant sits almost equidistant between Bogue Sound and the Atlantic Ocean. From the parking lot, you can see the sound — glimpse boats traveling the Intracoastal Waterway — and though you can only hear the low wash of the ocean in the background, the tone of the sky and the way the clouds stack up inland tell you that the beach is right there.

A steady stream of cars pulls into the parking lot. It’s small, only a dozen or so spaces, but somehow more cars pack in, and as one leaves, another arrives, just like the waves on the shore a hundred yards away. Arriving, departing, making room for the next. 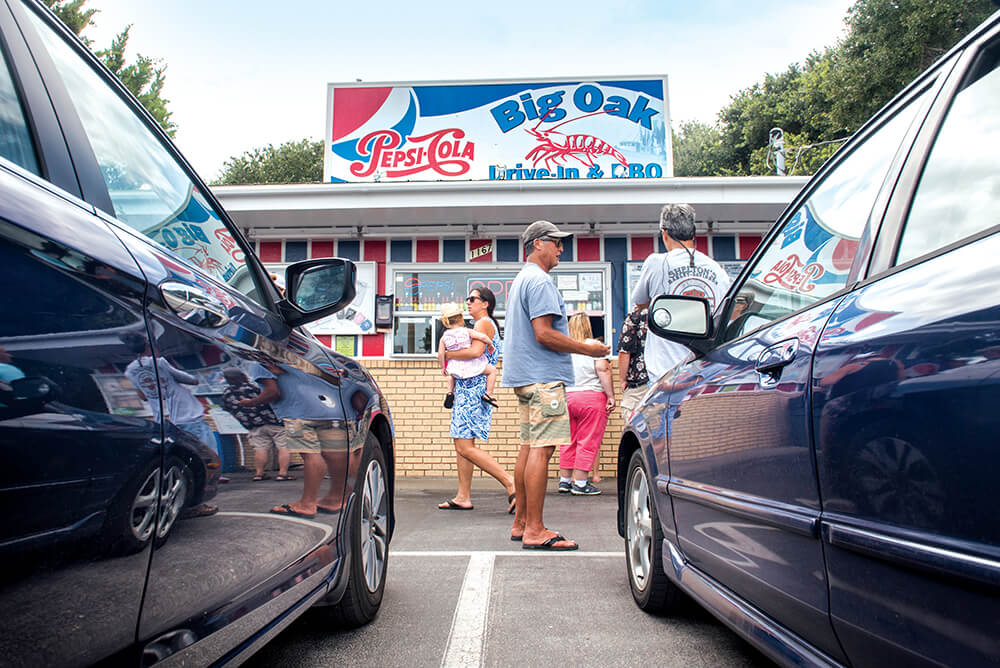 You could miss Big Oak as you drive down Salter Path Road. The little brick building with its flat roof and single sign perched there — the words “Big Oak Drive-In & BBQ” framing a shrimp — is almost a secret. But the namesake big oaks — a small forest of them, branches intertwined — around the restaurant and the traffic on Salter Path Road give the drive-in away. That traffic, especially in the height of summer, when it’s so hot your flip-flops stick to the asphalt, is a sure sign of something good ahead. On days like this, the idea of fried seafood turns off some folks, but they don’t know about the shrimpburger Jamie Godfrey serves here at Big Oak Drive-In.

But that’s a facetious answer, one that’s a bit too highfalutin for the exquisite simplicity of a shrimpburger.

A shrimpburger is a rousing round of applause in food form for the humble fried shrimp.

The simple answer is this: A shrimpburger is a steamed white bun, soft and chewy and a little sweet. The shrimp are small, very lightly battered in a cracker meal, and cooked to the ideal tenderness. Tartar sauce and coleslaw made in-house add creaminess, a spike of vinegar, and a cool crispness to each bite. The ketchup — not too much — mellows it all out. Some folks ask for a few dashes of the house-made hot sauce, but most just dive into that shrimpburger exactly as it is.

But that’s just what a shrimpburger’s made of, not what it is.

A shrimpburger is a study in texture and flavor; a rousing round of applause in food form for the humble fried shrimp; a bucket-list, round-trip, honey-pack-the-car-I-need-one-today meal on a bun.

A shrimpburger is that seemingly endless ebb and flow of diners, every day, from the moment Big Oak opens to the last order that goes flying out the pickup window. It’s the always-full parking lot; it’s the line two-dozen deep at the walk-up window. It’s sitting in camping chairs pulled from your car, or in low-slung beach chairs, or at one of the picnic tables. Or, if you have a truck, it’s tailgating — literally. People with pickups open the bed and sit there, legs swinging, waiting to hear their names called, waiting for that paper sack of food, stuffed and swollen with shrimpburgers, clamburgers, hamburgers, barbecue sandwiches, O-Rings, and H.Pups. 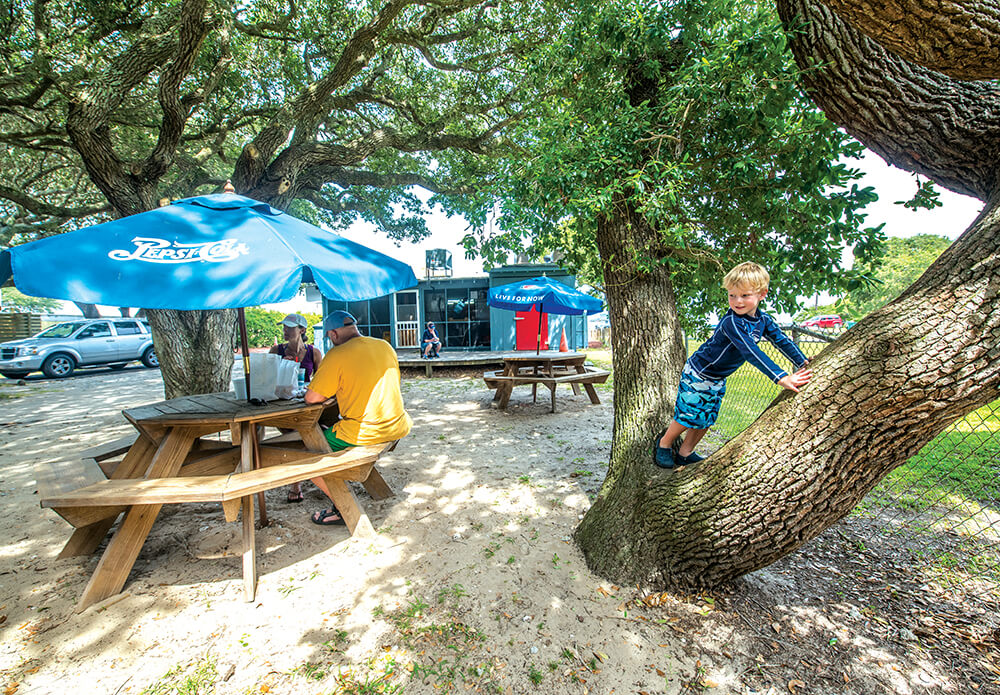 At Big Oak Drive-In, standing in line — soaking up sunshine, chatting with your neighbor, and playing on the namesake trees — is all part of the experience. photograph by Jeff Janowski

A shrimpburger is the look of joy that crosses the face of every person who ordered one the moment they take that first bite. Once you see that, why would you order anything else?

“B’cause the other stuff — our hamburgers, the barbecue, our scallops — they’re good,” says Jamie Godfrey, as he leans down to peer through the order window. “But the shrimpburger, that’s our top seller. Though I suppose some folks just want something else every once in a while.”

Not too often, though. Big Oak goes through 800 to 900 pounds of shrimp, or more, each week in the summer. Consider that each shrimpburger has about a quarter-pound of shrimp on it, and you’re talking about a mound of sandwiches bigger than any sand dune on the island.

What makes the shrimpburger so special, then, is the whole experience: the line to park, the line to order, the anticipation of hearing your name called. And then finally, blissfully, eating in your car or beside your car or on the hood of your car because you can’t stand the thought of not eating that shrimpburger right here, right now.

It’s not unusual to find a sign hanging at a seaside restaurant asking diners not to feed the gulls, but it’s not really necessary here. Every bite of every shrimpburger is savored. Each french fry eaten. Every O-Ring and H.Pup devoured. But the sign is there anyway, and a few gulls fly around, waiting for a gullible tourist or a sloppy eater to toss a wayward shrimp or fallen fry into the air. Inevitably someone does so, and inevitably they learn why you don’t feed the gulls. One gull turns to two gulls turns to 10 gulls, and that’s enough to overwhelm a kid, enough to make the parents pack up and leave before any scornful “didn’t you read the sign” looks can be cast their way. They pull out, making room for another car drawn by the tidal force that is Big Oak Drive-In & Bar-B-Q, and the shrimpburger.