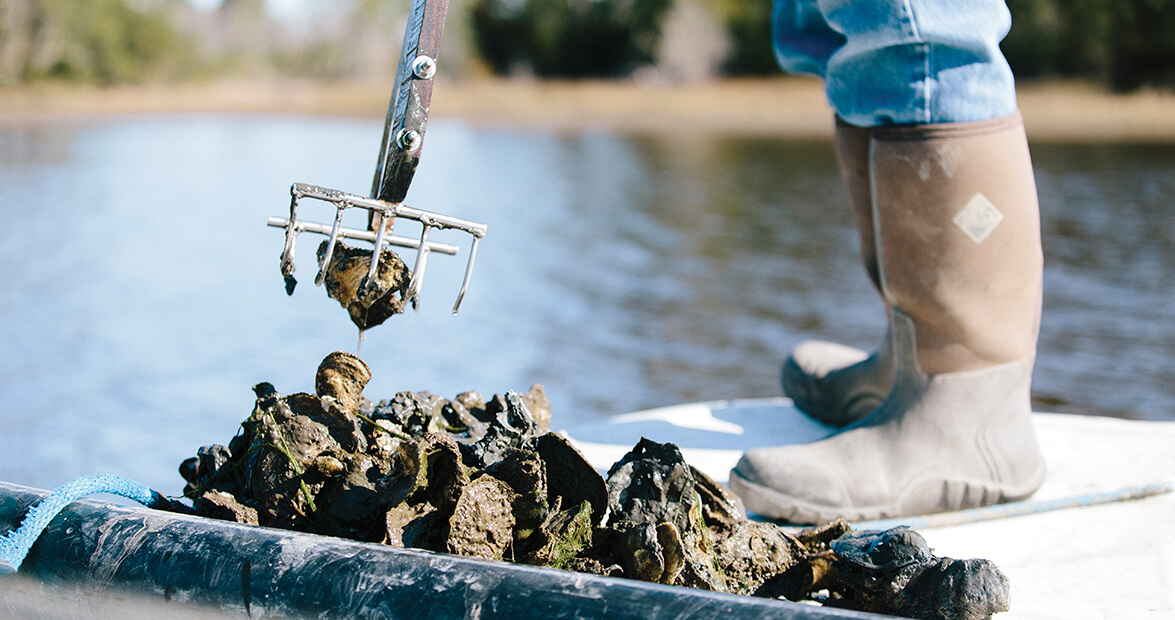 If oysters are diamonds in the rough, Stump Sound oysters are jewels in a mountain of gunk. Yes, wildlife enthusiasts often search for impressive crabs or majestic waterbirds, ignoring the humble clusters of oysters peeking through the grime. Even seashell enthusiasts sometimes dismiss the oysters’ dime-a-dozen, dirty, paw-like husks. And many people have a long list of foods they’d rather eat than those two-shelled scum suckers.

That’s fine. Oysters are a lesson of the beauty within.

North Carolina’s Stump Sound, a murky, seven-mile puddle stretching from Sneads Ferry to North Topsail Beach, is more of a lagoon than a sound. Here, among bending reeds and wiggling marsh mosquitoes, oyster hunters creep along in the silt, hoping to snare a heap of these plump stars of the goop.

Like their habitat, Stump Sound oysters are homely. The sound’s brackish waters loiter and drift, and its oysters, free from the turbulence of deeper currents, grow long and leggy. “They’re like cat tongues,” says Lin Peterson, cofounder of Locals Seafood in Raleigh. “Other oysters, such as Crab Slough from the Pamlico Sound, get tumbled with the flow so they’re round and easier to shuck than Stump Sound oysters.”

But between their narrow shells, these fat bivalves hide a divine experience. Tasting a Stump Sound oyster feels like taking a brisk dive into the chilly Atlantic and surfacing with a snootful of surf. It tastes exactly like the ocean, its brine, its sea life. David Greenwell, executive chef of 42nd Street Oyster Bar in Raleigh, says the Stumps’ salty taste puts them at the top of oyster-lovers’ favorites: “The saltier, the better,” he says. 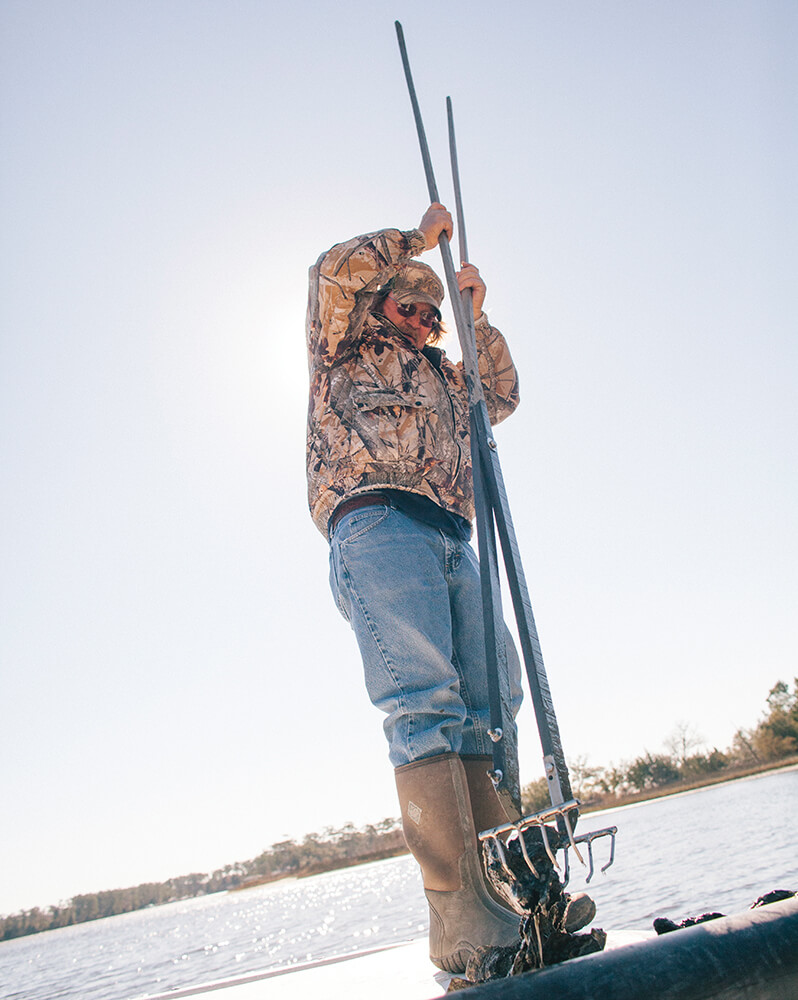 Joseph Huie has been a commercial fisherman in Sneads Ferry for 40 years. He uses giant tongs to pluck oysters from the mud. photograph by Millie Holloman Photography

Stumps derive their saltiness from their habitat and the conditions in North Carolina’s diverse estuaries. The salinity is influenced by the tidal exchanges of two inlets and runoff from the land, says Todd Miller, executive director of the North Carolina Coastal Federation. “This makes the water pretty salty.”

When you eat an oyster, you can taste its mood, its home. Because oysters eat by swallowing and filtering their surroundings, each one literally absorbs and reflects its own environment. In addition to salinity, an oyster’s flavor is influenced by the water temperature and chemistry, and the oyster’s age. “Just as if you were able to raise identical twins under different conditions, oysters raised in different locations can seem like they’re totally different creatures,” Peterson says.

You can taste the weather, as fresh rain dilutes the water’s salt content and makes for blander oysters. Warm weather puts oysters in the mood for love, and they slim down, devoting their energy to baby-making. “The colder it gets, the fatter the oyster gets,” says Joseph Huie, a commercial fisherman in Sneads Ferry who’s been pulling oysters from Stump Sound’s mud for about 40 years. “When it gets warm and they start to reproduce, they get right skimpy.”

Stump oysters taste exactly like the ocean, its brine, its sea life.

Many North Carolina oysters live in deeper waters, where professionals use dredges to dislodge them from 100-foot-long rocks, and then haul them 15 or more feet to the surface. Oysters in the Stump’s shallow, turbid waters require a different kind of finesse. These stealthy, skilled fishermen nudge their boats along the sound’s edge with a pole, careful not to disturb the sediment. “You have to try to keep the water clear so you can see them on the bottom,” Huie says. The gatherers look for glints of the shells’ mantles poking up from the mud like hopeful lips at a kissing booth. “We call those oysters growing in the mud ‘lip oysters’ because all you can see is their lips sticking out,” Huie says.

In Stump Sound, people gather oysters by hand or plunge “pick-up tongs” into the water — as if they were trying to grab a giant salad. On a good day, each bushel of Stumps takes about an hour to gather; the catch is limited to five bushels a day. That’s not a lot, considering the burgeoning demand for Stumps over other oysters, Huie says. “I’ve got people who drive 100 miles to buy them.”

• • •
As a child, before a single house stood on Topsail Island, Huie collected Stumps from his family’s oyster garden — an area of the sound where families, over generations, “plant” and tend sea life. “I still have a piece of bottom where I add my oysters, shells, and spats” — baby oysters — Huie says.

But the mainland’s rural character is changing. “The sound’s water quality is threatened by storm-water runoff that occurs when the landscape is hardened by development,” Miller says. These days, the sound is closed more frequently because it becomes polluted after heavy rain.

Under these threats, Stump Sound needs its oysters to keep it alive. One adult oyster can filter the impurities from up to 50 gallons of water a day. Their rocky shells provide homes and hiding places for plants and animals, like shrimp and young fish. The unadorned Stump doesn’t care if it’s misunderstood. It’s growing diamonds.

Live near the coast? Far from it? Either way, Stump Sound oysters are within your reach.

Preorder from these coastal companies and arrange for pickup at farmers markets in Wilmington, Spout Springs, Raleigh, Cary, Durham, and Chapel Hill. 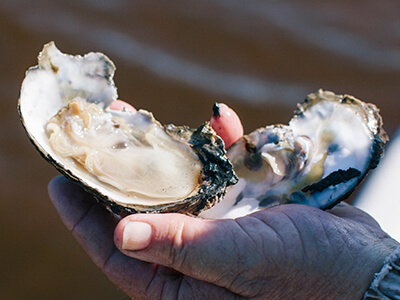