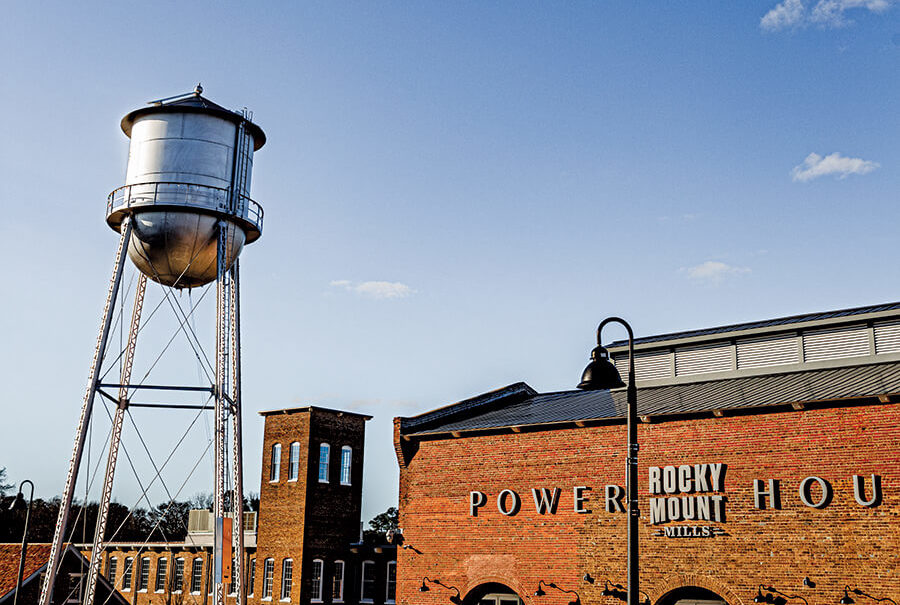 A generation has come and gone since anyone last water-skied on the Tar River Reservoir. Evan Covington Chavez is amazed that anyone tried it at all, seeing how small the flat stretch of water appears from up here, inside an airy loft in the newly renovated Rocky Mount Mills. This particular apartment, one of 67 within the former textile mill complex, is where Chavez brings prospective residents so that they can see what she saw when she first started working on this project in 2014.

“This is my favorite corner,” she says. The reservoir and dam are to the left; to the right, the tailrace curves along the mill’s foundation. “I would stand right here, in front of a huge hole cut in the brick, and I would say, ‘See, you’ll sit here, sip your morning coffee, and look out over this island.’” The precarious hole is now filled by a bank of ceiling-high windows. An Eames lounger is positioned in the corner for a woodsy, watery view, one that would be familiar to anyone who worked in or lived around the old mill in the past 200 years. Occupants of this prime real estate date back many centuries, in fact, to the Tuscarora tribes, who knew a good spot when they saw it. Just outside these windows is the Falls of the Tar, where the North Carolina Piedmont meets the Coastal Plain, one giving way to the other. All the more fitting that this is where Rocky Mount’s past and future come together, too.

“We take a very long view here. It takes time to build a community.”

Chavez, who is the real-estate development manager for Rocky Mount Mills, is recruiting a new generation for mill life on the Tar. For nearly two decades, the mill’s hulking shell of masonry and timbers sat mostly empty, a kind of permanent placeholder for a past that wasn’t coming back. But seven years ago, Capitol Broadcasting Company (CBC), which owns the 150-acre campus, began an ambitious development plan, with the intention of doing for Rocky Mount what the American Tobacco warehouses had done for downtown Durham. That CBC project fueled the Bull City’s economic revival and remains a source of business innovation today.

“We took a lot of inspiration from Durham — certainly around preserving architecture — but this is a different place,” Chavez says. For starters, Rocky Mount is a town of only about 54,000 people and is nearly an hour’s drive from Raleigh. But since the mill campus reopened two years ago — showing off its soaring, light-filled interiors, tidy rows of remodeled cottages, and even an enclave of tiny houses to rent by the night — four restaurants, five breweries, and various businesses, including a law firm, have arrived on campus. The entrepreneurs, many of them women, are cut from the cloth of all optimistic self-starters. Like Chavez, they focus on the opportunities, rather than the uncertainties, of life in a place that’s transforming every day.

“Who knows what this is going to be?” Chavez says brightly, as though that’s the most exciting part of all. She doesn’t rule anything out — even the return of waterskiing on the reservoir. “We take a very long view around here. It takes time to build a community.”

Rocky Mount Mills is the second oldest cotton mill in North Carolina, and it became one of the largest and longest continuously running mills in the state. Workers raised families in the mill village, ate lunch in the canteen, and worked until the tower bell — which, today, rings once again — marked the shift change. By design, work and life were one.

Reinventing that model meant that the modern mill would need a new purpose. “There’s no recipe book for this kind of community development,” says Michael Goodmon, senior vice president of CBC. “You have to think about what your community is going to do differently than everybody else, and hang on to that. In Durham, it’s been innovation and diversity. Here, we started with beer.”

North Carolina has more than 300 breweries and brewpubs, and wherever a craft brewery springs up, restaurants and shops tend to follow. With that in mind, Goodmon and his team decided to turn part of the campus into a beer incubator — a collective of mini breweries — and to partner with Nash Community College’s brewing and fermentation program to recruit talent. These small, turnkey spaces with all the bells and whistles included, like pasteurizing and canning equipment, make it possible for new breweries to grow. And customers are part of the package: The campus is set up as a kind of contained, rural pub crawl. Folks wander from brewery to brewery, pint glasses in hand, sampling fresh batches and then carting their six-packs and growlers home.

When Briana Brake and her business partner, Celeste Beatty, opened Spaceway Brewery at the mill, their new neighbors were already churning out notable IPAs, stouts, sours, and lagers. Brake, who grew up in Durham, was priced out of her hometown for a start-up, while Beatty splits her time between New York City and Rocky Mount. The “brew mill” incubator was ideal for a small operation like theirs. Now they plan to launch a bigger taproom project, Rocky Mount Brewery, which will sell Spaceway and Beatty’s Harlem Brew South beers, as well as others, starting in the summer.

“I thought I was just coming here to make beer,” Brake says, sipping one of her mill neighbor’s pints. “But I’ve learned so much from the people around me. I reconnected to my history — my grandfather was born and raised here. I have people coming into the brewery, and I’m like, ‘Hey cousin!’”

“There’s something the opposite of lonely here: the power of having strong women around.”

A sense of belonging is as important as the beer, says Inez Ribustello, president of Tarboro Brewing Company, which has a satellite brewery — TBC West: Taproom & Tacos — at the mill. Brake and Ribustello quickly struck up a friendship, as owners of brewing companies and mothers of daughters who are about the same age. Far from competitors, they brewed together last Halloween, and again this winter. “At the mill, it feels like you’ve got this team,” Ribustello says. “Everyone is doing their own unique style, different specialties, different skills.”

In a place where collective experience isn’t in short supply, Ribustello brings a particularly deep bench of expertise. When she and her husband, Stephen, opened their flagship restaurant, On the Square, 17 years ago in nearby Tarboro, they were pioneers in rural fine dining (predating Vivian Howard’s Chef & the Farmer by three years). “Any start-up business seems very lonely at first. You know, just the weight of the world on you,” she recalls. But in launching a casual restaurant at the mill, they had immediate support. “Everyone is excited and incredibly sincere in that they want it to work for you,” she says. “There’s something the opposite of lonely here: the power of having all these strong women around, the power of listening.”

Stories of the mill’s past continue to shape what this community will become. “We don’t bury the history,” Chavez says. For longtime locals who recall the shuffle of workers and the clang of the shift bell, Rocky Mount Mills was not always the welcoming place it is now. Built using the labor of enslaved people, and employing only white workers until 1965, these buildings can conjure opposing memories. Reclaiming this place for a new beginning, a different story, is happening all over campus.

In the canteen, a stand-alone brick building where blue sky fills the massive industrial windows, novelist Etaf Rum finally feels rooted in the town she’s lived in for more than a decade. Her business, Books & Beans, the only independent coffee and book shop in town, opened in 2019 to a full house of Rum’s new friends from the mill. She remembers standing up, tears in her eyes, and telling everyone, “Thank you for making me feel a part of something bigger than myself.”

Rum grew up in Brooklyn, New York, and moved to Rocky Mount shortly after graduating from high school in Tampa. Her parents, both Palestinian immigrants, arranged for her to marry a Palestinian man in Rocky Mount whose family owned a fish shop. While raising their two young children, she earned three degrees from North Carolina State University, and then began teaching English literature at Nash Community College. She would bring coffee for her students — “I wanted them to pay attention,” she says with a laugh. “We called our class ‘Books and Beans.’ They were the first community I had here.”

As her marriage unraveled, she began writing the deeply personal novel A Woman Is No Man, which was published last year to critical acclaim and earned Rum an appearance on The Today Show. Now at work on her second novel, she and her business partner and husband Brandon Clarke — they met at the local YMCA gym — have taken on a second restaurant project at the mill, too. “There’s such history in this place, but a future, too,” she says. “When I first saw the canteen, it was just a shell, and you could feel the potential in it.”

Goodmon of CBC felt a similar sense of possibility when he toured the empty mill with his father in 2007. “It’s a blank canvas,” he says. “We have to be different to do well.” Which explains the Wiffle ball field and the colorful tiny-house hotel near the river. Called River and Twine, the cluster of 20 modern mini cottages — named for North Carolina rivers — and three guest houses can each comfortably sleep two to four people. Wedding parties and corporate groups gather around the firepits, as do stay-cationers, grateful for a getaway close to home.

In warm weather, folks can slide their canoes and kayaks into the waiting Tar River to paddle or fish. Chavez is dreaming up plans for the teardrop-shaped island just across the way from her favorite corner. At the window, she can see openings in the woods, still marbled with silt from Hurricane Matthew in 2016. “Before we realized it would flood, we had big plans for what we would build out there,” she says. Maybe a zip line. A 1.3-mile paved loop. Now, she envisions paths of stepping-stones, families tubing and paddleboarding, whatever the Tar will allow.

“We’re not trying to tame it,” she says, pointing upstream to where the nearly endangered American eel is making a comeback. “It’s wild.” No denying that. Then, in the next breath, she adds, “It’s beautiful.”