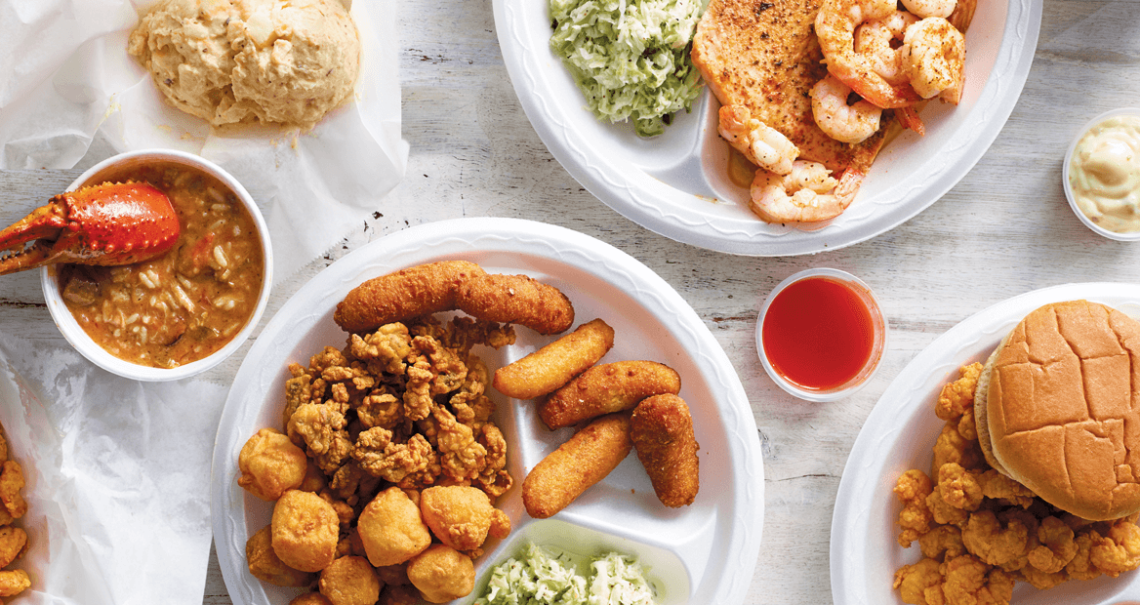 Growing up by the sea, with its tides and moods, fishing nets full or empty, is good preparation for the ebb and flow of life. Virginia Oden Hardesty and her husband, Charlie, were born and raised on the coast, in Beaufort, children of commercial fishermen. They grew up among boats, nets, and the joys and hardships of making a living on the water. And both left that life for college and landlocked jobs in the Winston-Salem area. Virginia earned a math degree from North Carolina A&T State University and an MBA from Wake Forest University, and took a job with AT&T (later called Lucent Technologies), where she stayed for 17 years. Charlie earned a degree in industrial engineering from Elizabeth City State University and set about building his career, too.

They had each other, and they had success, but they also shared a secret ambition: to own their own business someday. So around 1984, they began talking about what that dream might look like in reality. Virginia remembers the day they picked their passion: “Charlie sat down and said, ‘We’re going to decide tonight.’” The result of that heart-to-heart is Forsyth Seafood Market & Café in Winston-Salem, which celebrated its 35th anniversary last year.

“We knew what good seafood was,” Virginia says. “And Charlie had been selling shrimp from a truck that he drove up from the coast, so we decided on a fish market.” And just like that, across all those years, the familiar tug of the sea pulled them right back into the family business. 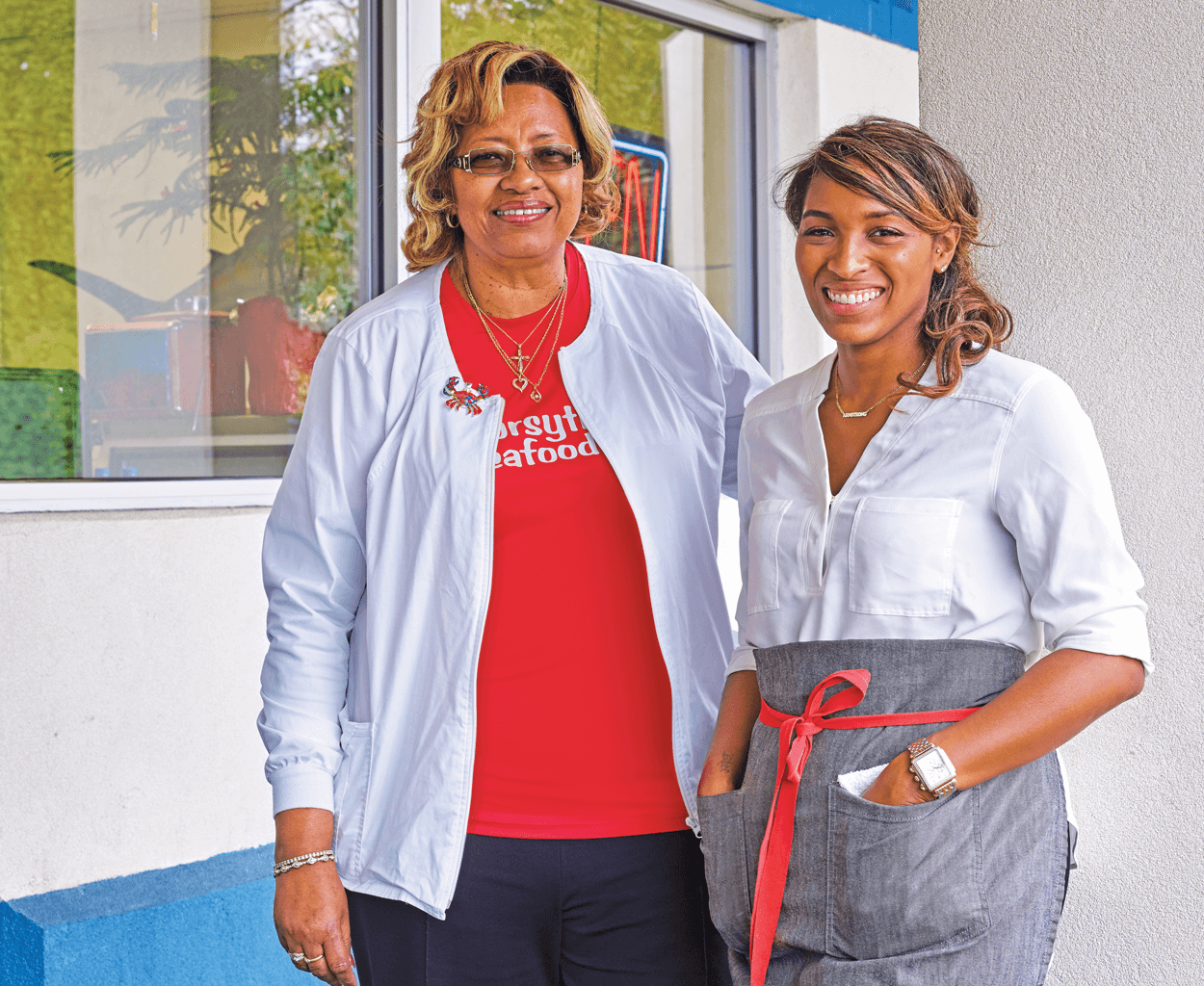 Virginia Oden Hardesty and her daughter, Ashley Hardesty Armstrong, use their popular restaurant and market to educate locals on the importance of buying North Carolina seafood. photograph by Dhanraj Emanuel

Forsyth Seafood quickly outgrew its original location on Liberty Street and moved to a larger spot on Martin Luther King Jr. Drive, where it remains today. Customers walk in the door and turn right to purchase the bright-eyed flounder and snapper that arrive from the coast. But the hungriest guests turn left to dine in the café, which serves classic fried fish, plus steamed and broiled offerings and seasonal dishes such as catfish stew and gumbo. Regulars know that they’re welcome to pick a fish from the market side, too, for the chef to cook up right then and there.

Another thing regulars know to do is check the whiteboard near the entrance, which welcomes them with a daily Bible verse. Inspired by their faith, the Hardestys have always tried to help the community around the market, which has struggled with declining property values since the foreclosure crisis. Through their church, Goler Memorial AME Zion, Charlie and Virginia started a program to feed the homeless. They also offered their expertise and encouragement to people starting their own businesses.

Then, in 2013, Virginia and the couple’s daughter, Ashley Hardesty Armstrong, encountered a hardship of their own: Charlie’s death. The community around the market rallied around them and made sure that Charlie’s legacy of kindness was not forgotten. Two years after his death, the city renamed a nearby street Hardesty Lane in Charlie’s honor. But the real testament to Charlie’s work walks through the door of the market every day: the customers. “He was helping the little guy start a business, helping kids go to college. Grown-ups will come in and say, ‘He helped me get this or that scholarship,’” Virginia says. “He was a humble man, not much for talk, but the city appreciated what he did.”

Since Charlie’s death, Virginia and Ashley have been running the place, with the help of Virginia’s brother, William Oden, who drives down from Virginia four days a week. It’s as if the family never really left the fishing business. But Ashley, like her parents, started off with different plans. She thought she’d had enough of the fish life: “I did my homework here, and I got teased a lot because my books smelled like fried fish, and because I got picked up by the big fish truck after school,” she says with a laugh. “My parents were like big celebrities. Everywhere we went, somebody would say, ‘It’s the fish people!’”

So, like her parents, Ashley picked a first profession as far away from fish as she could get: fashion. She earned a degree in fashion textile management from NC State University in 2013 and landed a job in Charlotte. “It was a small seamless-knitting factory with these huge machines, and I spent my time threading them and answering phone calls,” she says. After six months, she returned home, where she realized that she could use her marketing skills and style savvy to give the family business a fresh look. She took over Forsyth Seafood’s social media presence and branding, creating new packaging and labeling to sell fish off-site. Then, in 2016, she began a series of pop-up dinners called The Table Experience, which features local, organic foods and promotes healthy eating. Meanwhile, she honed her culinary skills at Johnson & Wales in Charlotte, graduating in 2018 with an internship at Kindred, the acclaimed Davidson restaurant.

Back in the kitchen at Forsyth, mother and daughter say that they work together with surprisingly little friction. “We have our lanes,” Virginia says. “Her lane is very different, being creative.” But Ashley is also community-focused, just like her father.

“There aren’t healthy food options in this area,” Ashley says, rattling off the names of the nearby fast-food joints. “Seafood is so good for us. We need to get more people interested.” The women have invited local elementary school groups to tour the market and learn about different kinds of fish, showing them what shrimp looks like before and after cooking, for instance. Virginia says that many of the kids have never touched a fresh fish before, and they’re fascinated.

Most of what Forsyth Seafood sells is wild caught, and the Hardestys try to source from fishermen in the state. But supply is becoming a challenge, especially after the big storms in the past year, which, at times, forced the market to source from coastal Virginia. The restaurant was hit hard after Hurricane Florence in September 2018, when lack of supply caused the family to cancel their popular Crab Fest.

“One supplier lost his boat and truck; there was no water or ice,” Ashley says. “It was hard to get some people to understand why we couldn’t do it — it was nature.”

That’s a lesson in the ebb and flow of the fishing life, of course. But, as the Hardestys know, difficult times often draw people closer together. Virginia certainly felt that way after Charlie’s death. “When your spouse passes, it can go one way or the other,” she says. “Customers support us. They pray for us.”

“They sent me wedding gifts!” Ashley says, still amazed.
Virginia smiles. “We have a lot of dedicated customers.”