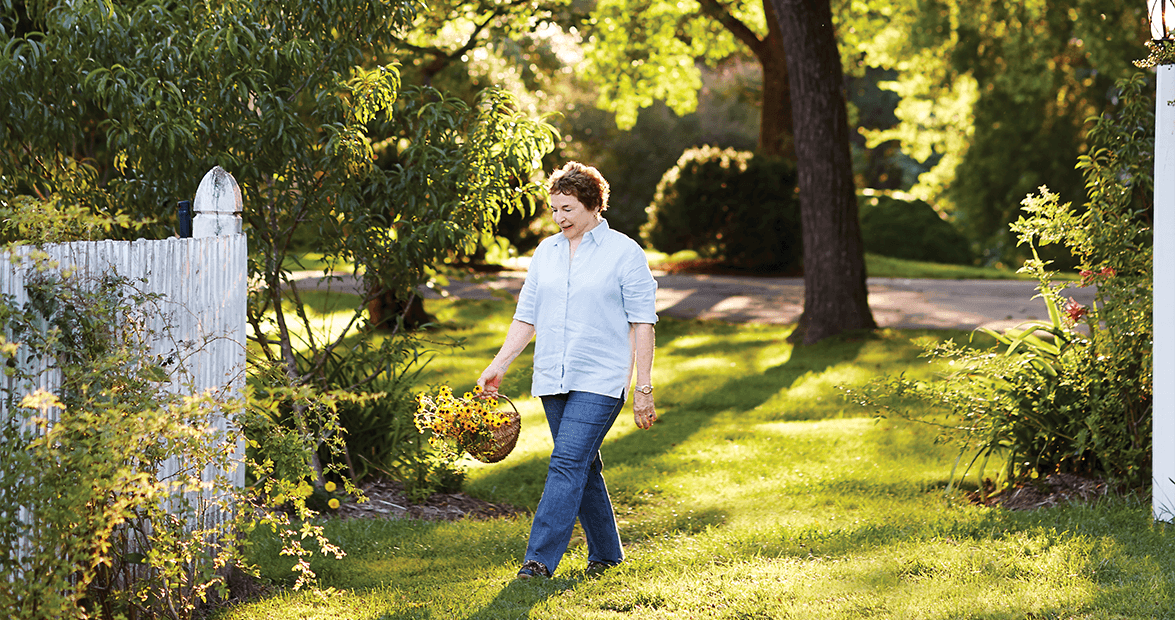 After only two years, Hillsborough seems like the home I never left. When my family and I decided to move to North Carolina after decades in San Francisco, we kept hearing from friends in this area, “You must move to Hillsborough — that’s where all the writers and artists live.” Being writers ourselves, we were magnetized by the idea of a town where creativity thrives, and, having grown up in a small town in Georgia, I wanted to return to a place with an intense sense of community. By great good luck, I found both, and more.

The decision to move to Hillsborough was sealed when we first drove around the national historic district. Clearly, I saw, local people cherish their land. Everywhere on that late spring day, the roses, jasmine, irises, peonies, wisteria, and daffodils bloomed profligately. Even on the 1768 map of Hillsborough, gardens are drawn next to houses, with notes such as “a formal parterre garden just to the east.” It’s easy to pull back the flimsy curtain of time and imagine tidy kitchen gardens, serpentine boxwood hedges, arbors heavy with muscadine grapes, somber cedar lanes, larkspur and hollyhock borders that reminded the early Scots-Irish and English Quakers of their faraway homes. Many dignified early structures remain, some with intact covered wells and detached brick kitchens.

The district, more than 400 acres of white houses and lofty trees, appeared, on that first visit, to be a little Eden. Would time bear that out? Who lived here? Was this a place that encouraged felicitous lives? Even the bungalows, cottages, and ’50s ranches among the older homes began to look historic. I spotted immediately the identical signs with evocative names: Tamarind, Pilgrim’s Rest, Twin Chimneys, Berry Brick House, Sans Souci, Sparrow, Seven Hearths, Heartsease, Elm Cottage, Burnside. When houses have names, they acquire an anthropomorphic presence, somehow causing the four walls to become more than the sum of parts. Houses named for their original inhabitants — Nash-Hooper, Webb, Newman, Scott — still hold on to their stories. Open the door, and a host of lively people clamoring for attention fades into the hall behind the present owner. In spring, the houses float on rafts of pink and white azaleas. I imagined a fast-forward glimpse of summer, crape myrtles lining the sidewalks, breaking out into fluffy mauve, milky rose, and white blossoms. In fall, there’s so much autumn that you’re thrown back to the autumns of your youth, when you first learned the smell of smoky leaves and the feel of running through raked golden and scarlet piles. Winter — well, winter is winter, but occasionally a layer of transforming snow will bring everyone out to revel in the calm silence.

On that first visit, I recall following the silver historic markers stationed along Churton, the main street, gradually absorbing that Hillsborough is a town that remembers history. Here’s where the protesting Regulators acted up about taxes before the Revolution; here’s where one William Hooper, a signer of the Declaration of Independence, lived; here’s where Billy Strayhorn, jazz composer and pianist, spent his childhood; here’s Burwell School, a 19th-century girls’ academy where the slave Elizabeth Keckley labored for the Burwell family. Eventually, through her talent as a seamstress, she bought her freedom and went on to sew for Mary Todd Lincoln.

I confess to liking cemeteries. I’ve always thought that they reveal profound truths. What’s more telling than how the dead are buried? In Hillsborough’s two old ones, many stacked-stone boundary walls among the graves speak of privacy and hierarchy. I’d like to kneel among the obelisks and headstones with tracing paper and decipher some of the many epitaphs on the weathered stones. Those I can read are pious and hopeful, and occasionally personal: “The last words she spoke to her children were ‘Be good and meet me in heaven.’ ” If it had been Sunday, I could have visited the five antebellum churches. My favorite has became the gently Gothic St. Matthew’s Episcopal Church, built in 1825, where I bask in the stained-glass light and imagine scenes in English novels.

A pleasure of wandering outside the historic district is that you begin to see that this is a town of quirky residents. I spot multiple bottle trees, which once were thought to protect from evil spirits; collections of artistic birdhouses; front porches furnished with the requisite rocking chairs, yes, but perhaps in hot pink. Driving the side streets, I glimpse Celtic crosses, beehives, unpainted barns, swans, and even one yard profusely planted with lurid plastic flowers. The long-shuttered cotton mill gives this serial-restorer serious fantasies of big-windowed lofts and a cozy farm-to-table Southern restaurant. The fate of such a place is already written; now the magician must appear. Already, the mill neighborhood rises — a few shops, destinations for coffee,  for barbecue, and two breweries where people drop in after dinner for the live music.

We bought an old place made of dreams, two miles out of town, and fell into gardening and restoration. I spent mornings at the library learning about the history of Orange, as it was originally called, and found in the locked glass case Gardens of Old Hillsborough, 1971, edited by Mrs. Charles H. Blake. Ah! A previous owner of my house and the author of its gardens. She had no idea, writing back then about every rose in Hillsborough, that she was sending a long cast forward to catch the person who tends her old musk roses, long after she’s gone. 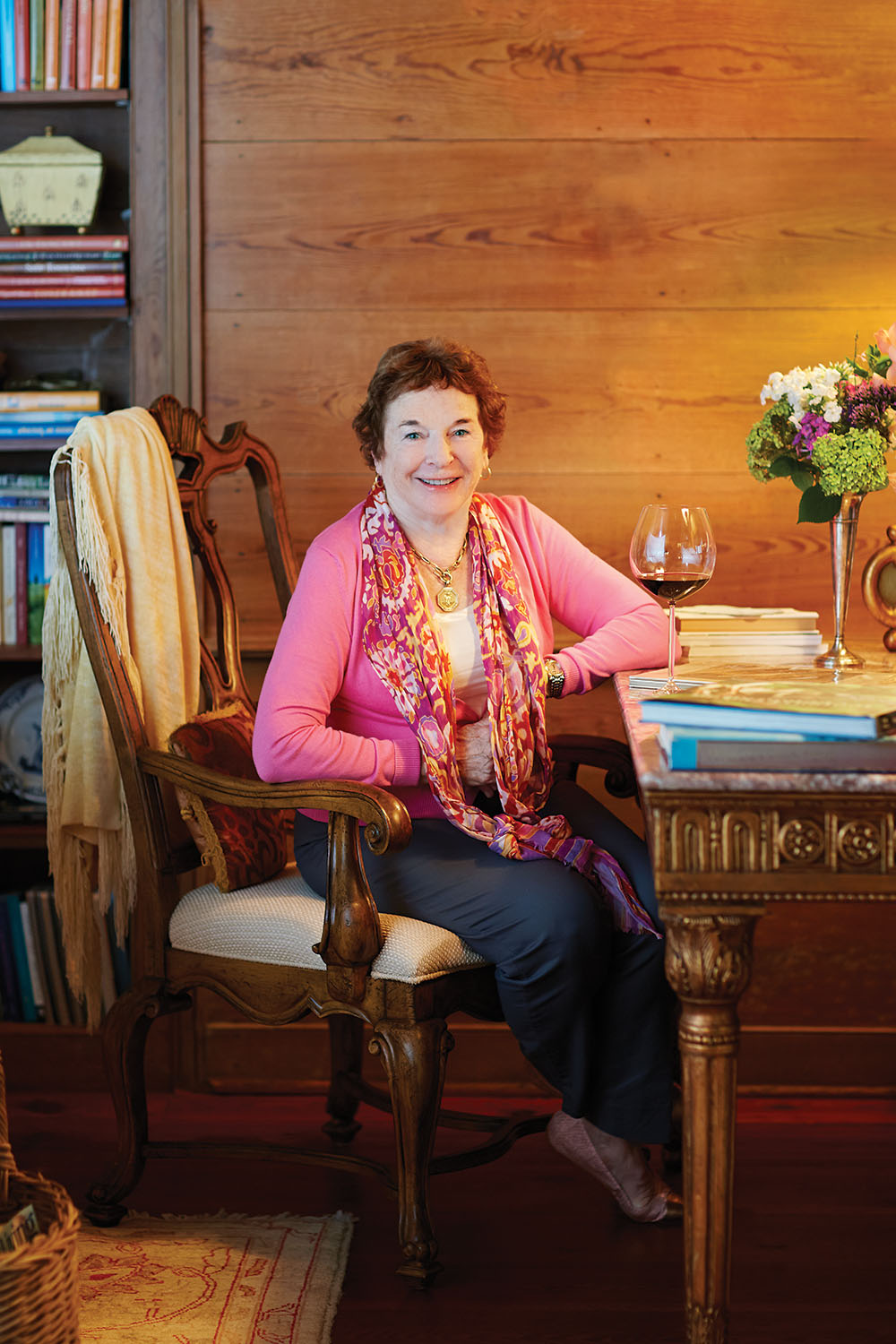 As soon as I unpacked, I set about reading the important books of the many writers inresidence here. What a cache of brilliance. Does any small town anywhere have as many novelists, poets, and nonfiction writers within its borders?  Purple Crow Books devotes a wall to their works. Soon, we joined the throngs dining along Churton on Last Fridays, a monthly get-together for all, with music on the courthouse lawn and the bookstore and galleries open late. We never miss the strictly local parades that are constantly being organ-ized. Who wouldn’t show up to see the majorettes and dance schools, vintage trucks, and scouts tossing peppermints to the crowd? Taking up a new life in Hillsborough was easy.

By now, I’ve walked every street. Everyone walks. The dogs of choice? Labs. Westies, beagles, Jack Russells, mongrels, cockapoos — a few. But mostly, gentle golden Labs. Maybe it’s just that kind of town. A favorite trek is the recently-completed, wooden and paved River Walk, starting at the end of Cameron Street and meandering along the Eno River. You’re near town but are in the woods, listening to the water flowing over rocks, spotting the beautiful but poisonous Jimsonweed flowers, sipping the coffee you’ve picked up at Weaver Street Market, all without attracting any ticks. I’m partial to towns that have a river running through them.

Living here, I find pleasures I didn’t even know I was missing. A great surprise is the music. Music everywhere! Groups pop up across from Cup-A-Joe on Saturday morning. As I’m strolling around the neighborhoods, music floats out of windows, and someone tunes her fiddle on the front porch while two friends wait to begin “I’ll Fly Away.” As I pass, they start up. A plaintive, high voice follows me down the block. At the Saturday morning farmers market, music accompanies the selection of baby beets, ready-to-go pizza dough, and butter beans. At Antonia’s restaurant, many are lured by Tuesday night jazz and half-priced wine. Even at a friend’s dinner party, a guest may share her gift of several arias, or everyone chooses parts and reads a play while the hors d’oeuvres are devoured.

I expected fun; Southerners know how to enjoy the moment, and the friendliness of the South is legendary and true. But, coming here from San Francisco, where social events were penciled into the agenda weeks ahead, I’ve been overjoyed at the spontaneity. “Come over for chicken livers and Janis Joplin,” I find in my email inbox and, “Big pink cocktails on my porch at 6.” I return to the South from a long exile and experience again, as in my Georgia childhood, the grand day-to-day human exchange that, if you’ve never lived elsewhere, you have no idea can be so rare. Strike up a friendship with the couple at the next table and exchange numbers; chat with the woman loading groceries into her car next to yours; just wave as a car passes you on your walk.

One building I always stop to admire is the 1844 courthouse. Lucky the town anchored by a structure symbolic of its history! Four solid Doric columns, mellow brick, and the classical style of a Greek temple — the building could not be more important to those who live here. And here’s the town’s heartbeat: the clock in the cupola. It dates to the 1760s — possibly a gift from King George III. Residents since then have revered and protected it through upheavals and moves from earlier locales. On the square at the center of town, we have this marking of our hours, this impartial witness to our days at home in this unique town.