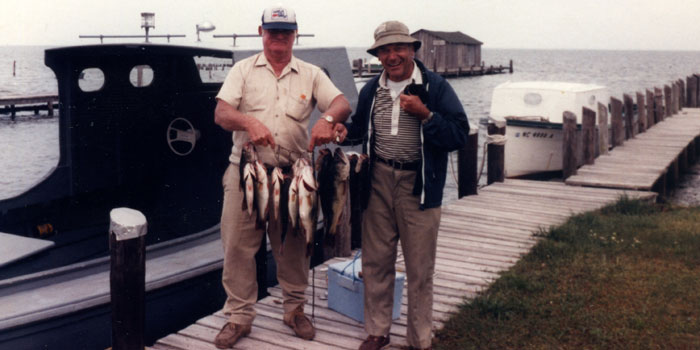 Standing on the bank’s edge at Waterlily, looking beyond the stubby pilings left by a washed-away pier, you see the historic Currituck Beach Lighthouse across the sound. If you time it right, you catch crabbers coming in with the day’s haul, just as they have for half a century.

Lying so far east and north that even today it’s only sparsely populated, the land around the Currituck Sound was once the exclusive hunting and fishing grounds for visitors who came from Asheville; Baltimore, Maryland; and New York to enjoy its abundant wildlife and brag-worthy catches. They stayed in lodges like the Currituck Club, the Swan Island Club, or the stately Whalehead Club in Corolla. At this isolated place of beauty and peace, they found a warm welcome from the residents who made their life on the water.

To troll in the right places, they needed a guide and his boat. And one of the best was Frank Carter, who navigated the waters with ease, knew the best fish beds and kept his clients off the mud shoals.

Chances were good they’d take home a new nickname along with the fish or duck they bagged — Carter was known for his good-natured teasing. A modest man, he nevertheless earned praise because of his expertise, patience, and dedication to all the sound provided. He made his own boat and tools. A strong man, he navigated the shallows using a long stick known as a shoving pole. His detailed records show a keen mind for business, with careful notations for the weight of the catch, wind speed, and weather. Like other watermen of his day, he was formidable, hauling fish by the hundreds in nets he made and mended by hand. For a half-century, he made his living on the sound, still pulling his end of the net until he died at 81 in 1995.

His gifts came from a deep bond with the water, the wind, and the weather.

“My father knew more than the weatherman,” says his son Walton Carter, 65, who lives in Coinjock, a village just down the road from his father’s old dock at Waterlily. “He always looked at the barometer and could tell you what was going to happen that day. Or he could look at the sky. That’s how he knew where to go fishing. If you had high winds, you had to get behind something, so you didn’t get blown away. That was his life.”

Even though he was busy following the cycle of the sound — commercial fishing in the summer, hunting in the winter, and sport-fish guiding in the spring and fall — Frank Carter was also a good father, Walton Carter says. Walton started going out with his dad on excursions when he was 6 or 7.

“The biggest thrill for me and my brother was not what we got for Christmas, but when [Dad] could take us duck hunting,” he says. “It was real cold, and people would say, ‘You’re not going to take them out on this cold day.’ But that was what we wanted to do.”

A former federal surveyor from Hyde County, the senior Carter gave up government work in the late 1940s to adopt a life on the sound’s terms — bone-cold winters exposed to unforgiving winds and sultry summer afternoons in the marshes and currents of the Currituck Sound. Every season had its demands and rewards. If he endured summer’s heat, he hauled in heaps of fish; if he knew the sweet spots for sport fishermen, they’d pay well and return year after year. Today, a guide makes $125 to $200 a day. Although his records don’t show his income, Carter was proficient enough to take care of his family.

The area has changed, with the Outer Banks now a popular vacation spot and retirees from around the country living beside fishing families in quaint suburban neighborhoods. Yet you can find traces of the old ways everywhere, whether in the narrow road that takes you to an aging dock or the constant sound of birds and water lapping the largely undeveloped shore.

The Currituck Sound stretches from the state’s border with Virginia south to Kitty Hawk, where it joins the Albemarle Sound and travels to the ocean. This brackish water is home to bluegill, crappy, and perch — but starting in the 1930s, the largemouth population rose dramatically, attracted by a water grass known as milfoil that thrived because of a special seawater-freshwater balance. By the 1970s, the sound teemed with bass, attracting the 1975 Bassmaster Classic. Opening ceremonies took place in the old Carolinian parking lot.

The sound’s shallow waters and reeds draw thousands of game birds, and hunters concealed in floating blinds take down so many that strict limits have been in place since the 1800s. Indeed, legends say birds flying overhead darkened the sky like an eclipse, although these days the fowl, like the fish, have largely moved on.

By the 1980s, the milfoil disappeared, and the bass dwindled. Gone, too, was the market for imported carp that came here in holding pens near Waterlily and other soundside villages. The Carolinian was demolished in 2001 to make room for oceanfront homes. But at one time, the combination of hunting and fishing drew magnates and famous figures, drugstore owners, mechanics, even coal miners whose bosses booked and paid for their vacations.

An exemplary waterman, Frank Carter had an ideal combination of rugged strength, friendly manners, and humble service only the best guides offered.

“They were hard working, earnest, and humorous,” says Sharon Meade, curator of the Outer Banks Center for Wildlife Education in Corolla, where many of Carter’s possessions, decoys, and photos are on display. “You trusted them. You were in rough water and didn’t know where you were. You put your life in their hands.”

Many guides developed lifelong friendships with their guests. They served as godparents to each other’s children and exchanged stories of what must have seemed like opposite cultures of the industrial North and the isolated Outer Banks.

People living on the Outer Banks relied on their own work and skills to provide for themselves and their families. This inventiveness and creative thinking made them exceptional in many ways, Meade says. “You lived your life by the seasons on the water,” she says. “It took hardiness. It took grit.”

In addition to his prowess as a guide, Frank Carter had a craftsman’s touch for decoy carving. The Center for Wildlife Education now displays some of his work, along with his tools.

These rough-hewn implements with their sturdy handles and blades show a concern for the practical and a command of important details — indicative of Carter’s character.

“You were looking for someone who knew the sound,” Meade says. “It’s a shallow body of water. You have to be careful, or you’ll end up in a mud flat and no one will know where you are.

“In some ways, [the guides were] the first biologists. They knew the sound, when the fish would be there — and what winds would put the fish, where. It’s a wind-driven tide. It’s knowing what direction the wind is blowing because it can shift and the water can go out and you’ll be pretty high and dry. They ‘put you on the fish’ — and consistently.”

Walton Carter says his father’s knowledge helped many amateurs avoid catastrophe. “We’ve had some interesting characters,” he says. “We’ve had all kinds. People from New York would come down and nearly freeze to death because ours is a damp cold. It goes right through you.”

Sounding like his father might have, Walton Carter adds, “When there’s ice freezing on your overcoat, that’s when it’s fun.”

Marion Blackburn lives in Greenville. Her work has appeared in Archaeology magazine and East, ECU’s flagship publication. Marion’s most recent story for Our State was “Eastern Strings” (October 2011).