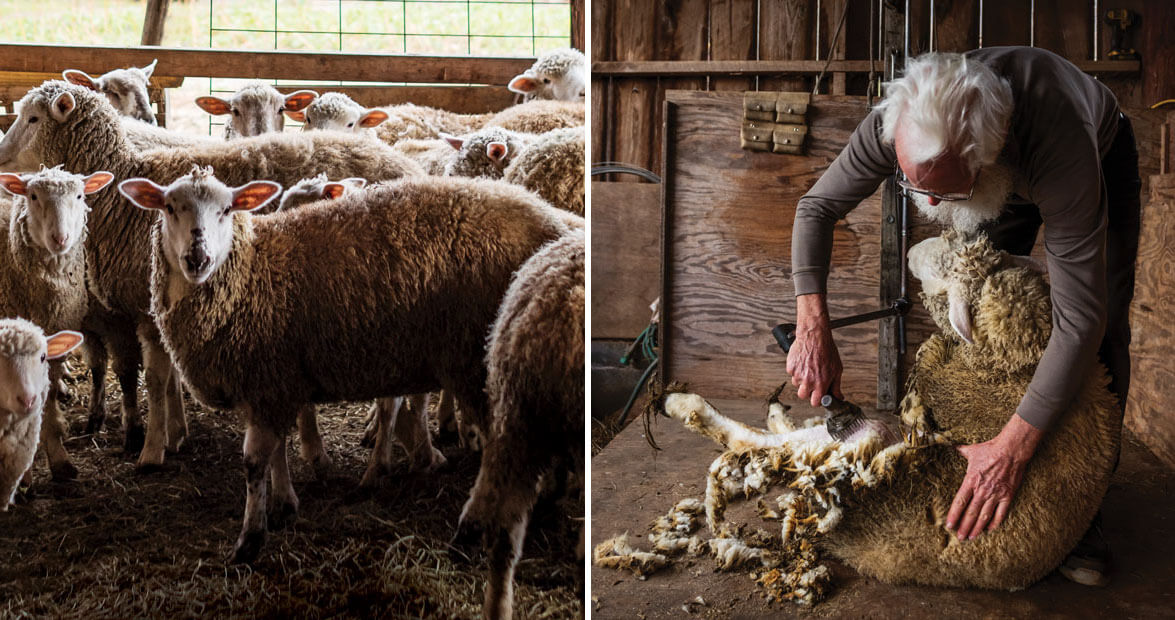 Anthony Cole has been on the road since before dawn. His wake-up call was from a French restaurant in Asheville that desperately needed 25 dozen eggs, which his brood provided. Now, as his golden yolks are making their way onto plates, Anthony is headed east with a Bojangles’ country ham biscuit balanced on his knee. He still has a long day of farm work ahead of him — shearing sheep, mostly.

A well-read man with a horseshoe mustache and calloused hands, Anthony grew up farming, but he never meant to become a professional sheep shearer. It’s just part of the diversified agricultural program that he came up with when he was laid off from a state job and had to reinvent his life. As a fifth-generation, full-time farmer, he raises vegetables, Christmas trees, and livestock. At first, shearing was just another farm task, something that had to be done: He couldn’t find anyone to take on the job when he got his first flock. “You look in the phone book under S for shearers, and you’re not going to find many of us,” he says. “There’s a whole lot to know and not a lot of ways to learn.”

Back when he was getting started, there was no Internet, no how-to videos or social media. Anthony had a step-by-step poster on how to shear a sheep nailed up in his barn. “That poster was right, but it was worthless,” he says. “To learn how to shear, you have to actually do it.” There are industry-derived, leg-to-neck patterns that are intended to guide a shearer. This predetermined map requires that nothing be missed and results in a full fleece that, when spread out, seems larger than imaginable. If one stroke of the clippers is missed, the sheep may end up with his still-attached fleece dragging on the ground. This, Anthony knows from experience: “I came through the school of hard knocks.” 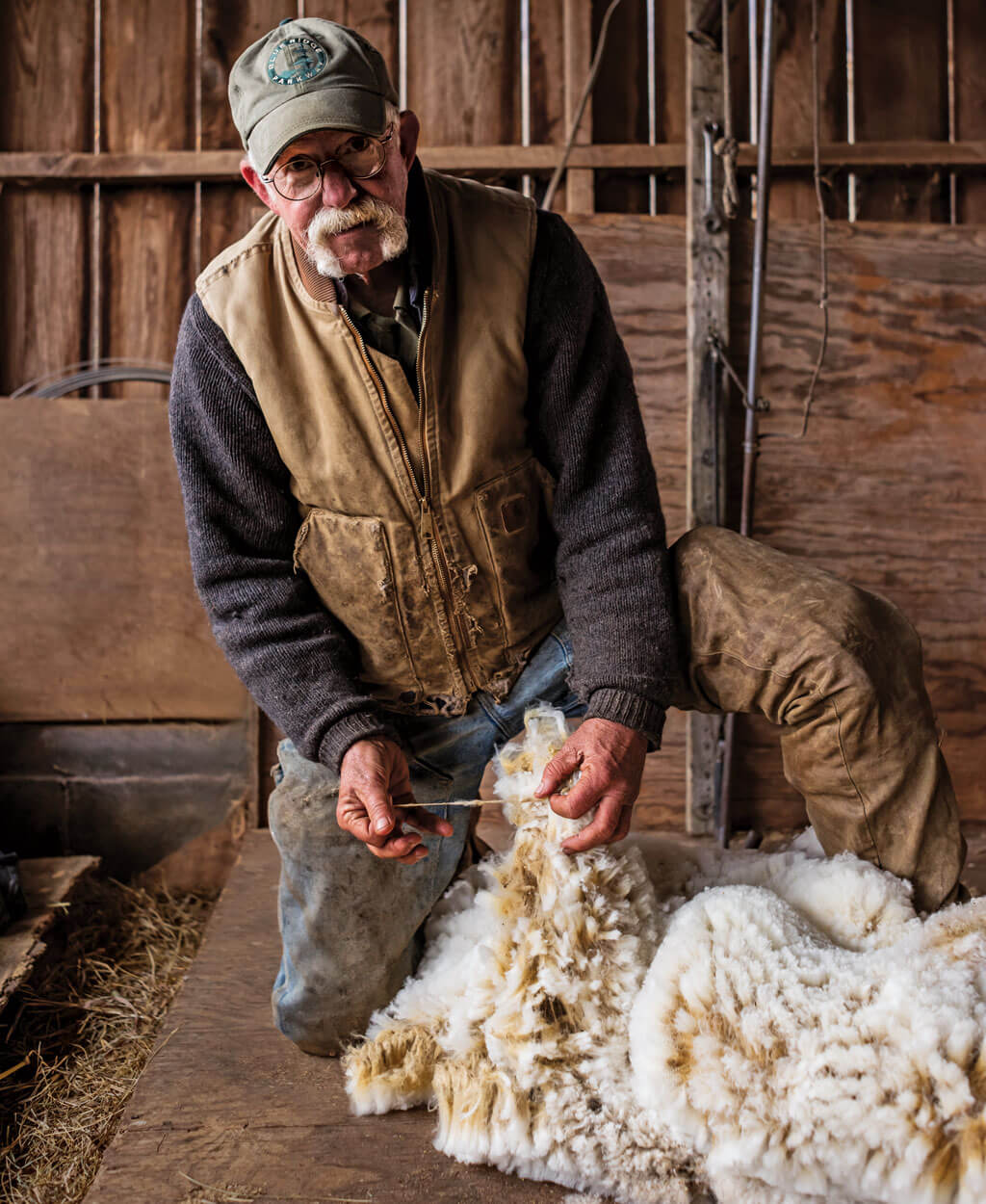 Out of necessity, fifth-generation farmer Anthony Cole became a self-taught sheep shearer. Without a yearly haircut, his 80-head flock would overheat and suffer. At the crack of dawn, he starts the day traveling to farms around his Leicester home to share his craft with other sheep owners. photograph by Jack Sorokin

One year of fleece growth is roughly enough to make three sweaters. So after two years of not being sheared, a sheep is wearing the equivalent of six cozy cardigans. Whereas ancient populations of sheep would have been fine with shedding or simple rooing — the process of picking wool by hand — many domesticated wool breeds would experience heat exhaustion without a regular close cut. “Sheep as they are today are creatures we created from ancestors,” Anthony says. “Stop shearing, and they’ll suffer.”

“You look in the phone book under S for shearers, and you’re not going to find many of us.”

Despite the need, Anthony says you could count the number of professional shearers in North Carolina on two hands and still have some fingers left. Which is why the calls that he gets from farmers and homesteaders for shearing around the western part of the state — his chosen service radius — are even more harried than the ones he gets from French chefs hunting for eggs. Dawn Church-Smith, a fiber artist, has a few such sheep in need. In the past, she’s gotten desperate enough to cut off their fleece with hair-cutting scissors. This time, it won’t come to that.

Anthony drives past Dawn’s white picket fence and backs into the gravel driveway near her farmhouse and two-story barn. Dawn, a longtime client, grows her own food and spins her flock’s fleece into yarn on-site. “Places like this, they’re like seed banks,” Anthony says. “Only this is about preserving life skills. What we think of as folk crafts, those are the things that have kept humans alive, historically.”

Anthony takes a seat on the tailgate of his pick-up so he can swap his work boots for a worn pair of sneakers. Boots are too bulky. Shearing requires agility, feeling. “Shearing is a whole-body experience. Has to be,” he says. “A big sheep could launch you into next week.”

Dawn has sequestered the few sheep she needs sheared in her barn. Anthony puts a plywood board down on the earthen floor and plugs in his electric clippers with an extension cord. Then, he opens the barn door to greet a ewe named Smokey.

Just as gardeners plant according to climate zones, farmers choose sheep that were bred for a specific environment. Smokey’s a Finn sheep. “Finns are usually fairly docile,” Anthony says, pressing his toe against a pressure point on Smokey’s hip. It’s a pause button on her instinct to run. Smokey, sensing that there’s nothing to be done, sits at attention like a human waiting to receive a haircut. Anthony removes the wool from her belly before he starts in on the main fleece. (After he’s gone, Dawn will hand-wash it and set it out on the porch to dry.) 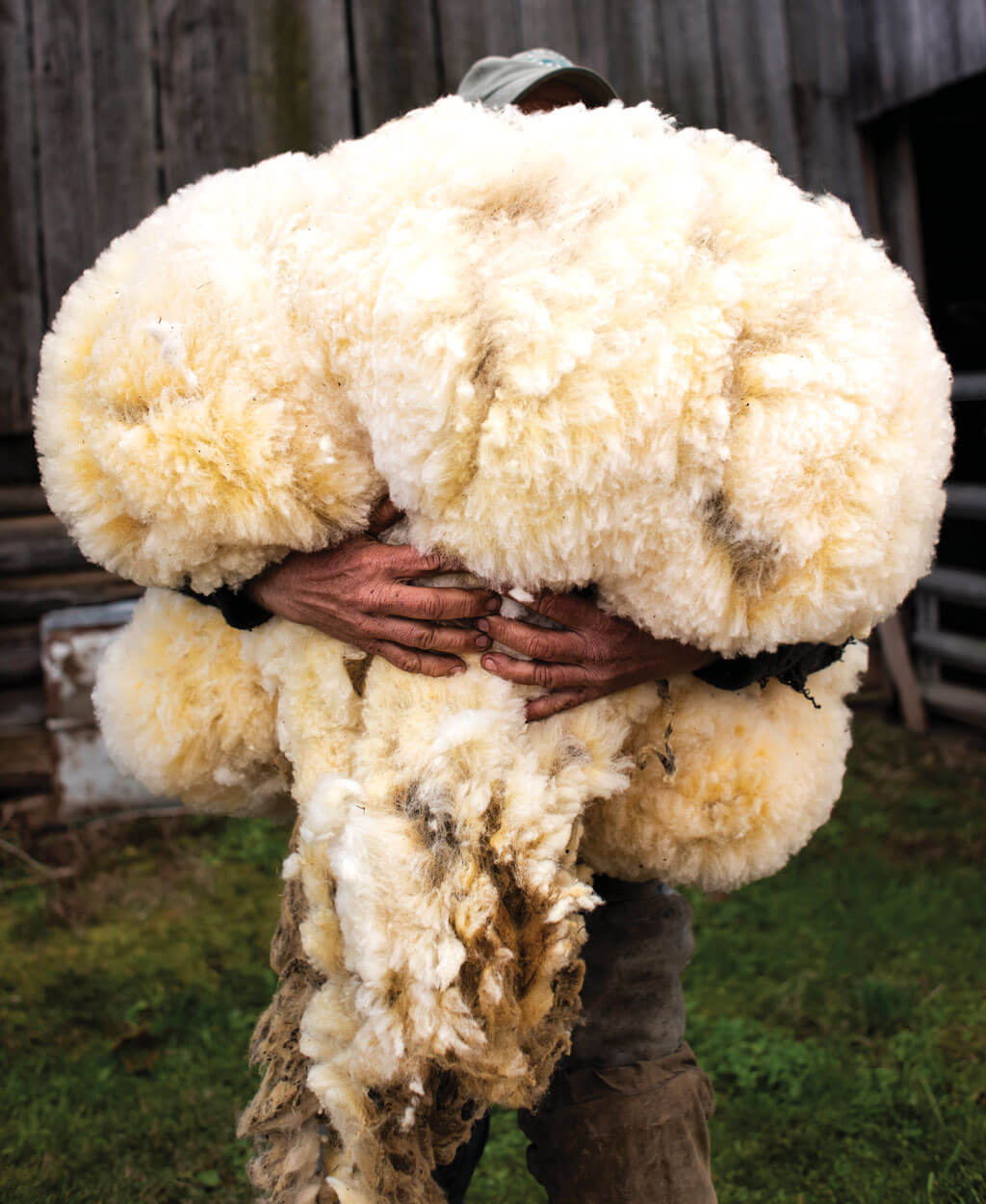 When shearing Anthony Cole follows a predetermined map, which results in a full fleece. photograph by Jack Sorokin

Wool-producing countries like Australia and New Zealand have experimented with robotic shearing, but Anthony is of the opinion that traditional shearing techniques will never be overtaken by technology. His arm goes up and around, finally dipping Smokey’s head back as if the two of them were contestants in a dance competition. “Sheep respond to every muscle and every movement,” he says, releasing his grip. “All over the world, this is how it’s done.”

Anthony sometimes gives public demonstrations of the trade, which, to modern eyes, has the look of ancient artistry. When he started out, he would ask if anyone in the crowd had ever lived on a farm, and a few people would raise their hands. Over time, it was a challenge to find people who’d even spent time with sheep. Now, he just asks who’s seen the movie Babe, which stars a sheep-herding pig.

“This disconnect from the source of things like food and wool has only come in the last couple of generations,” he says. “When you work with sheep, you’re part of a partnership 10,000 years in the making. It’s hard not to feel a certain obligation to continue that.”

At his own farm in Leicester, Anthony has a few lambs that are overdue for shearing. “It’s a ‘cobbler’s family has no shoes’ sort of situation,” he says, driving toward home. His 80-head flock lives in the shadow of mountains that have belonged to his family since before the days of household electricity. Parts of the property were sold off generations ago, but he and his brother have been able to reclaim its north-facing slopes. “Originally, the Coles came from England — Colehill, specifically,” he says. “You look that place up, and the first thing you’ll see is a picture of sheep.”

To get the day’s job done, Anthony has enlisted some help. Unbelievably, out of the loose handful of shearers left in the state, three of them live in the same neighborhood. Their farms are within three ridgelines of each other. Leicester is, inexplicably, the land of sheep and shearers. 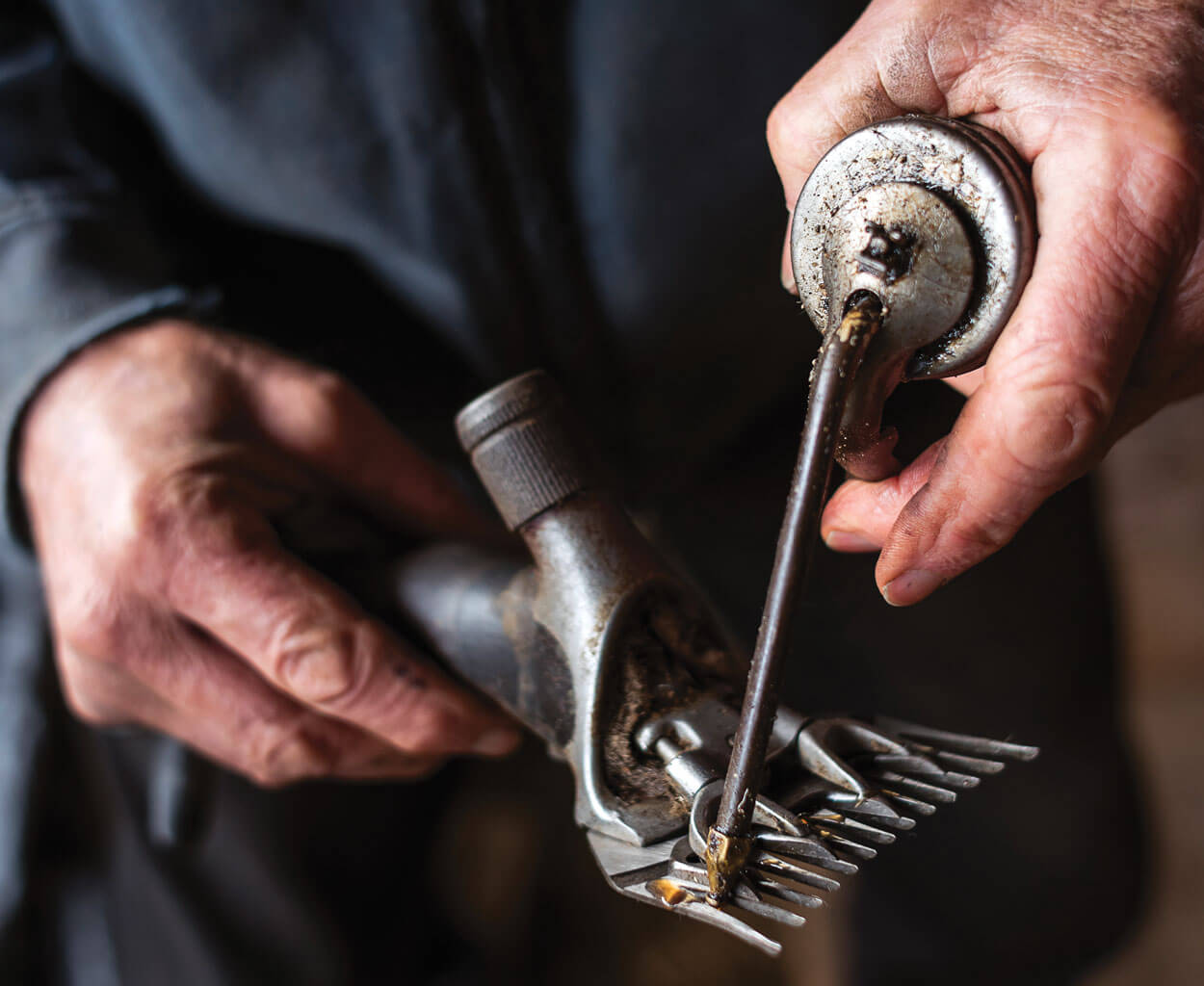 Jonathan diligently oils a pair of clippers used to shear sheep. His tools must be in tip-top shape, especially when he works next to professional shearing teams in wool-producing countries like Australia. photograph by Jack Sorokin

Whereas Anthony mostly makes day trips to tend small flocks nearby, his neighbor, Jonathan Hearne, and Jonathan’s son, Ben, cover the entire Southeast, traveling more than seven states to handle flocks that number in the hundreds. They’ve even sheared in Australia, where they held their own against high-output traveling teams, which value speed.

“Shearing is a whole-body experience. A big sheep could launch you into next week.”

The three men convene in the mouth of Anthony’s barn. Almost immediately, they fall into a choreography that they perfected during fall shearing season, when they last worked together. Without verbal communication, they’re sweeping, assembling, preparing the barn’s built-in shearing platform, which is elevated like a stage. Light falls through a far window, spotlighting Jonathan — the most seasoned among them, with nearly a half-century of shearing experience — as he steps up with a sheep.

Jonathan looks like a figure from Michelangelo’s imagination. His wiry white beard is uncommonly full. His hand is pressed against the chosen lamb’s side as a steadying presence. Stroke after stroke, he begins to peel away fleece from tender flesh. Slowly, an unbroken, ivory fleece billows into a cloud around them.

For the most part, defensive tendencies have been bred out of sheep, but individuals can still get rowdy. When that happens, Jonathan talks to the animals in soothing tones. His mentor used to sing. Anthony has developed a calming regimen of blowing into a disturbed lamb’s nostrils, as parents of newborns are taught to blow into their babies’ faces to startle them out of crying.

Ben stands in the barn’s shadows, watching his father. He went to college to study philosophy before choosing to live as a tradesman. “We don’t have Zen in Western philosophy, and I wouldn’t claim to know what Zen is, but shearing is definitely associated with mindfulness. There’s an awareness, a muscle memory that goes beyond thinking,” he says. “It’s honest work because it’s necessary work. Not everyone knows how to do this. When I’m shearing, I feel valued. I feel valuable.”

These shearers are also shepherds, and good shepherds never take their flocks for granted.

Behind him, young sheep rustle through the barn, with its smell of sweet hay and distant wood fires. Here, sheep shearing isn’t a dying trade; it’s a living tradition. Jonathan puts down his shearing tool. Ben picks it up. The rhythm continues. All afternoon, the flock bleats as newly sheared sheep re-enter the enclosure, naked for the first time in their lives. They’ve endured a strange transition that’s forcing them to reintroduce themselves to their brethren. Freshly shorn, they appear to trust that, even now, they’ll be warm, fed, protected. These shearers are also shepherds, and good shepherds never take their flocks for granted.

Anthony lifts a tuft of wool from the floor and twists it into a tight spiral. Then, he releases it, and the fibers double back, tightening and strengthening, as if by instinct. “When humans realized wool could do this, it changed everything,” he says, watching the fleece twirl itself into a rudimentary form of yarn. “It’s almost like the wool itself has memory.”