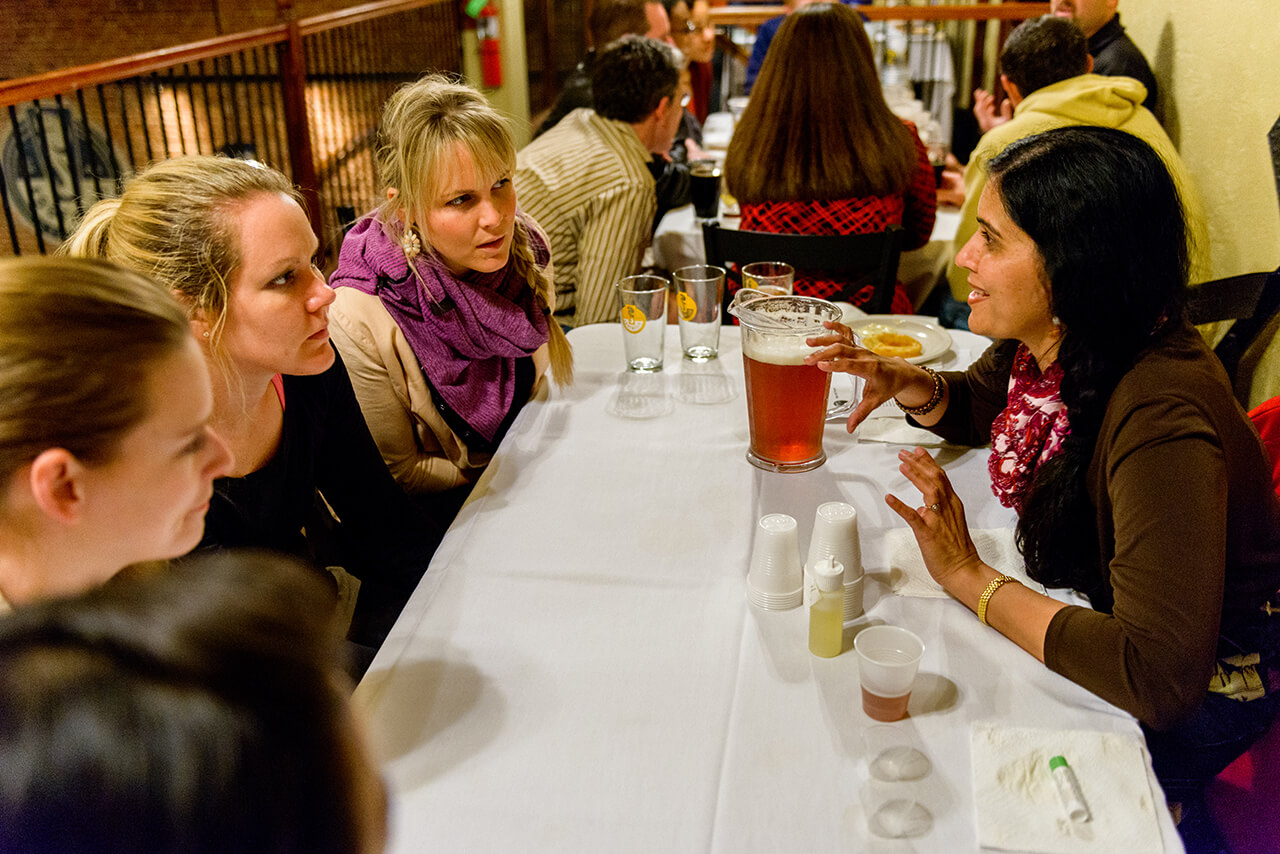 I’m in a room surrounded by a bunch of people who are a heck of a lot smarter than I am. This sort of scenario is a regular exercise of humbleness writers should expect nearly every time they cover a story.

Usually, I know a little something about a subject prior to when I report on it. In this case, I know absolutely nothing. But tonight, that’s perfectly OK. I’m asked if I’d like a beer, I sit down, and I simply listen because here at Geeks-N-Taps, a traveling event series that explores the science behind beer, a lack of knowledge among attendees is not only permitted, it’s welcomed.

“Super hardcore beer enthusiasts, this I think will enhance some of their knowledge, but the average person who loves a craft beer but doesn’t know everything that goes into beer [will enjoy Geeks-N-Taps, too],” says founder and organizer Pat Phelps. “I mean, I’ve learned so much already.”

Phelps, a former Smithsonian Institution educator, launched Geeks-N-Taps in February and hosts several events throughout the state each month. Topics range from cryogenics to how DNA influences beer preference, but tonight I’m learning all about hops and how they’re not only used for bittering, but also for aromas and flavors. 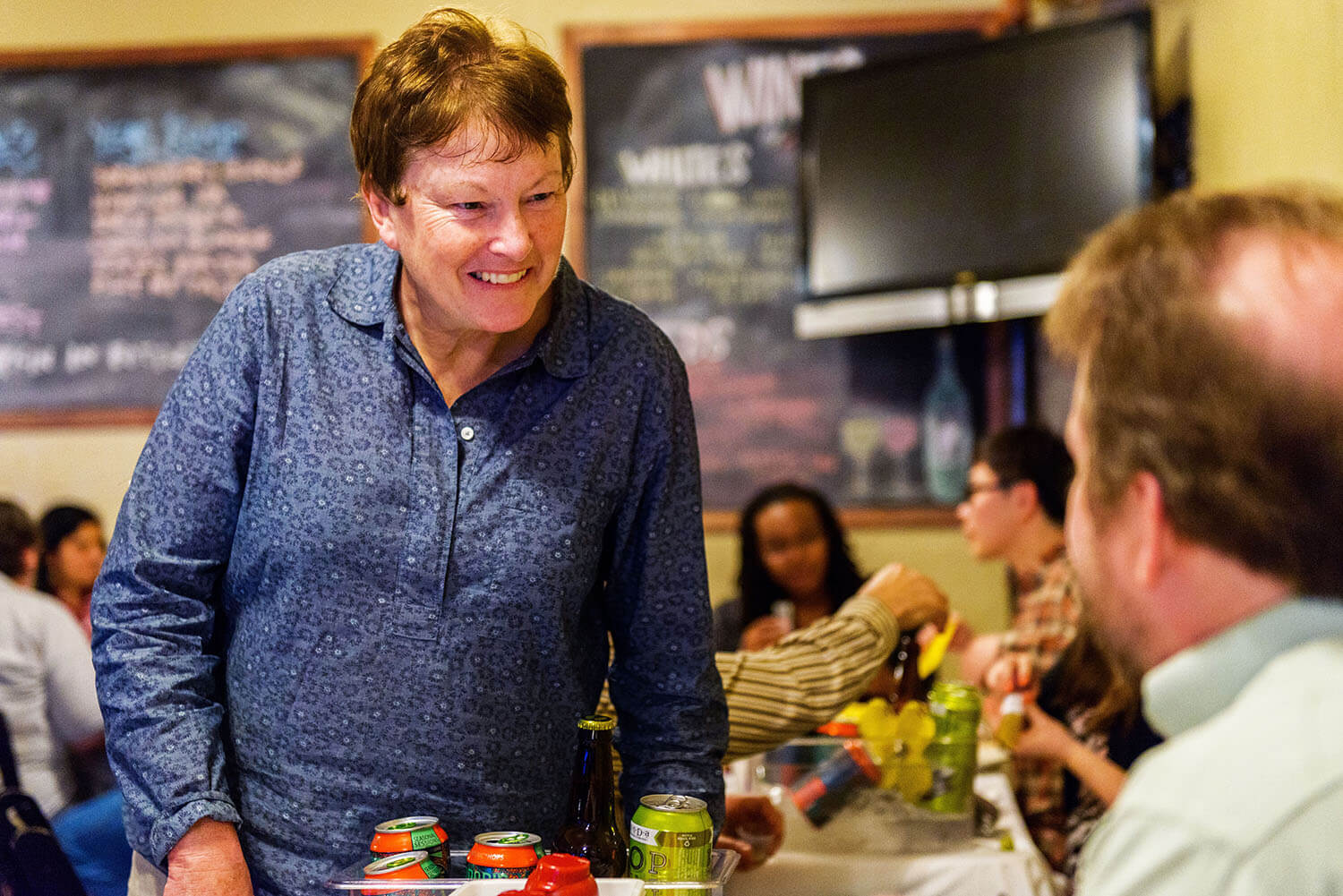 Medicine cups used for tastings are strewn about each of the informational booths that line the upstairs event space at Foothills Brewing’s pub in downtown Winston-Salem. There are hops flowers on one table, big pitchers on others. Test tubes are labeled with unusual names of hops: “Fuggle” and “Citra” and “Chinook.” It’s all a mad experiment fueled by high-gravity beer, and I am in over my head.

There’s talk of a bunch of words I keep asking those sitting behind the tables to repeat.

Ah, did someone say “lipids”? Finally, a word I understand. Let me tell you a little something about lipids: I studied them in high school biology … and that’s all I have to say about that. (Read the last sentence in the style of Forrest Gump, as that was how it was written.)

Here’s the thing: I drink beer. I enjoy beer. If I were president, I’d make a national holiday out of Blueberry Wheat Day at Chapel Hill’s Top of the Hill. But I couldn’t tell you what makes a Saison a Saison, and until much more recently than I’d care to admit, I didn’t know what “IPA” stood for.

But what I do know is this: The best way to learn something is to teach it. That’s what I love about being a writer. I have to take complicated, oftentimes brain-racking bits and pieces of information and turn them into something digestible and enjoyable to others, almost, you could say, like a scientist or brewer. Sometimes that requires me to drink beer on the job. Cheers to journalistic truth and keeping the public informed.

At Geeks-N-Taps, I can’t help but feel like I’m surrounded by my kind of people. Yes, these very intelligent, incredibly accomplished scientists and teachers recruited from local universities and schools to teach the layman-ist of the laymen like me. (Bless their hearts.) Sure, each has more educational degrees than I have fingers, and they all research complicated things, such as atherosclerosis — or is it arteriosclerosis? — in mice.

But. BUT. We might all be different, but we’re all the same, you see, especially when imbibing beer, the most unifying beverage of all among the 21-and-up crowd. At this event, there’s just about an equal number of women and men, of blue collar and white collar, of young and old. 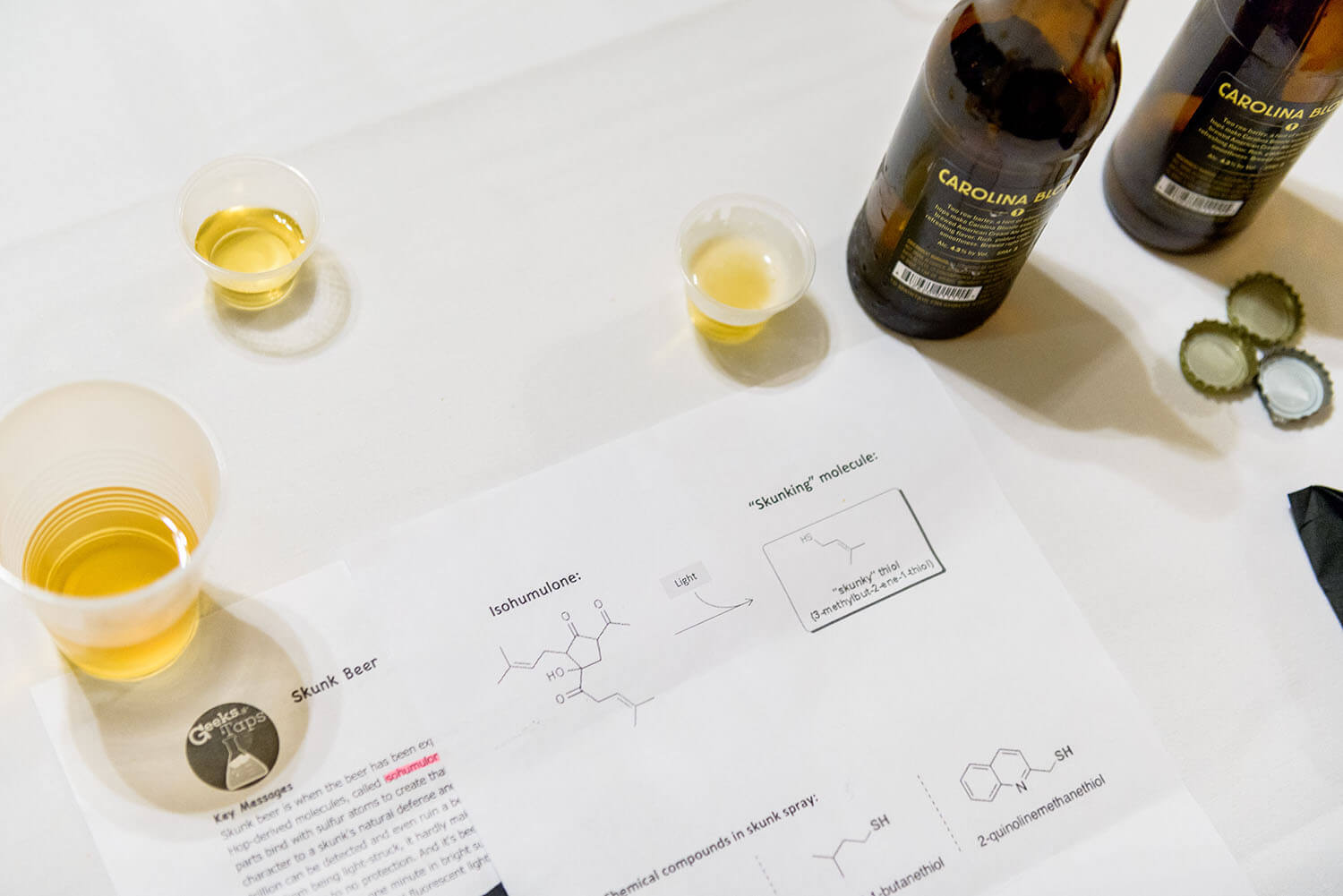 These scientists are patient. I ask a bunch of rhetorical questions to make myself appear as knowledgeable as the homebrewers who sit next to me. Sometimes I just rattle off random beer terminology I learned five minutes prior.

My transparent attempt at fitting in isn’t working, so I begin to let my defenses down. At Geeks-N-Taps, you come to learn, and did I ever.

Did you know hops prefer to grow above a certain latitude? That’s why there are so many hops farms in the Pacific Northwest and very few in the South. A hops farmer from Yadkin County taught me that at his booth.

And did you know that skunked beer is caused by a chemical reaction when hops are exposed to too much light? That’s why it’s best if beer is packaged in brown bottles.

AND did you know that IPAs were first crafted to survive the long voyage from England to India, so that’s a reason why they have a higher hops concentration? I had no clue.

Excuse my brew naïveté, but the other attendees seem to be getting a kick out of what they’re learning, too. The impressive homebrewers among me, who almost always have impressive beards, scratch them slowly and mull over whether the beer they’re tasting has fruity or floral notes. Meanwhile, I sit there, giddy that I now know the difference between a pilsner and a porter.

The formulas and chemical reactions up for discussion might be complicated, but Geeks-N-Taps is a mixture of all that is fundamental to a successful evening gathering: good conversation, the sharing of knowledge, and tasty libations. It’s simple science.

“I hope the public develops a better understanding of what they’re drinking, and it helps them become more aware of the nuances of all the craft beer and make a better choice when they go to the breweries to pick out a drink,” Phelps says.

That I can manage.