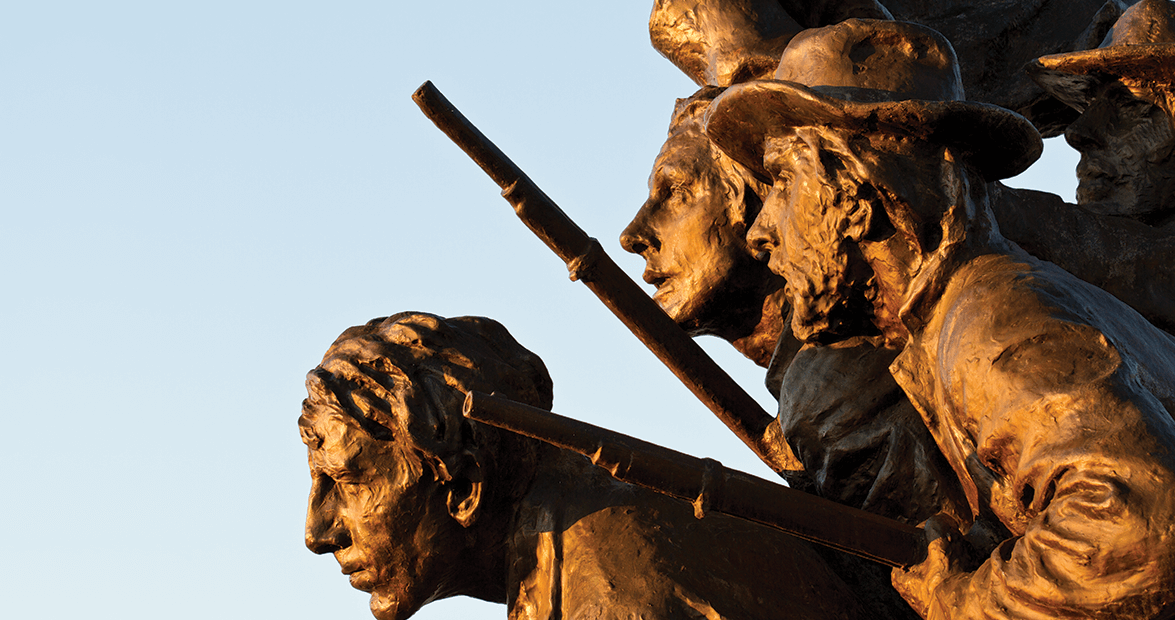 The darkest hour of the war lasts for three days.

It is an hour named for a place, the slaughter of North Carolina troops spelled out in the name of a small crossroads town in Pennsylvania, 350 miles north of Raleigh — far beyond Richmond, Washington, even Maryland: Gettysburg.

The name becomes shorthand for death on a massive scale, for blunder and miscalculation, for unimaginable courage. And for defeat.

July 1 to 3, 1863. It is an hour whose penumbra burns for weeks and months afterward, the breaking point between before and after.

Before Gettysburg, the 26th North Carolina Regiment is the largest in the Army of Northern Virginia. After Gettysburg, it virtually ceases to exist, a legion of ghosts and a handful of shocked survivors.

Even in the chronicle of this bloody war, Gettysburg is extraordinary. It exceeds all other battles in the number of casualties — more than Shiloh, Chancellorsville, or Antietam.

More extraordinary is the absoluteness of the Confederate defeat in the absence of an absolute victory for the Union.

Gone is the possibility of Southern victory — which seemed so tantalizingly close just weeks earlier, when Gen. Robert E. Lee celebrated a stunning defeat of the U.S. Army at Chancellorsville. He has invaded the North to force the issue, to place his army between the Federal army and Washington, giving President Lincoln no alternative but to sue for peace and guarantee the sovereignty of the Confederate States of America.

Lee’s army, spread out in three corps marching through Maryland and Pennsylvania, blunders into battle as one regiment advances on the town, searching for shoes. But Gettysburg has neither a shoe factory nor a shoe warehouse. And Lee’s cavalry, under its storied commander, J.E.B. Stuart, is unaccounted for somewhere in the Pennsylvania countryside. Thus Lee’s army marches blind in enemy territory, straight into the Army of the Potomac.

The regiment searching for shoes is set upon by Union cavalry blocking their road. Within hours, nearly 170,000 soldiers are locked in a desperate fight.

Other figures tell the tale with numbing clarity. Over the next three days, as many as 51,000 men are killed, wounded, captured, or missing in action — many of the missing simply obliterated by artillery.

Some 28,000 of these men are Confederates — nearly one-third of the army.

The numbers are staggering, and every state in the Confederacy mourns its dead. But North Carolina endures a special grief: One in four of the dead is a North Carolinian.

On the first day, nearly 14,000 Tar Heels march into battle: 32 regiments of infantry, four regiments of cavalry, one attached battalion, and four batteries of artillery. By the third day, some 6,000 of them lie wounded or dead on the field.

All the numbers are approximate, for it is impossible to keep track of the fates of so many men in violent motion — especially as the Army of Northern Virginia retreats south, leaving behind its dead and many of the wounded, who will disappear into hospitals and prison camps, many to die there, others giving false names to their captors.

Each of the three days is counted off in brutal assaults. On the first day, the 43rd North Carolina, under Col. Thomas S. Kenan, joins eight other North Carolina regiments in the assault that drives the Federals from Seminary Hill west of the town.

The 26th North Carolina advances against the Iron Brigade — resolute veterans from Michigan, Indiana, and Wisconsin — at McPherson’s Ridge.

Charging uphill into the murderous fire of seasoned troops, Henry King Burgwyn Jr., the “boy colonel” of the 26th North Carolina, is shot through the lungs while bearing the colors of his regiment. He is 21 years old. Thirteen other color bearers are shot down — yet the regiment never loses its colors.

Command passes to Col. John Randolph Lane. He turns to rally his men and almost at once is shot in the back of the neck, the minié ball passing through his mouth. He is two days shy of his 28th birthday — for, like his brigade commander, Gen. James Johnston Pettigrew, he was born on the Fourth of July. He will survive the war, though he will suffer four more wounds.

One by one every colonel, major, and captain on the field goes down, except Capt. H.C. Albright, who now takes command of the whole regiment.

Capt. J.J. Young, assistant quartermaster, sends an after-battle report to Gov. Zebulon Vance — who once led that same regiment into battle: “We went in with over 800 men in the regiment. There came out but 216, all told, unhurt.” One company now musters a single sergeant and no one else — and he falls on the third day.

To Colonel Burgwyn’s father and namesake, Captain Young writes, “How beautiful he looked even in death. There was none of the usual hideous appearance generally apparent in those killed while contending in mortal strife, but he looked like one just fallen asleep.”

Young and his comrades bury Burgwyn near a walnut tree: “Capt. Iredell of the 47th is on his left side & Capt. Wilson Co B of the 26th on his right. I was fearful to put his uniform coat on knowing if the vandal Yankee knew it they would disinter him. I wrapped him closely in his red woolen blanket to preserve the body as much as possible.”

Tom Setser, a 21-year-old private who survives the battle unhurt, writes home, “You may talk of this big fite and that big fite, but tha hante bin sutch fiting as was dun over their for the first days fite. I could all but walk over the field on dead and wounded. I never hav seen the like before.”

Finally, the soldiers must retire from the field and leave the work to other troops.

On the second day, other regiments assault Little Round Top on the southern portion of the battlefield, a mile from the town. Attacking straight up the rough, boulder-strewn slopes, they almost take the hill.

Pvt. Louis Leon of the 53rd North Carolina, held in reserve throughout the day after a hard fight on July 1, describes advancing under an artillery barrage: “Just at dark we were sent to the front under terrible cannonading. Still, it was certainly a beautiful sight. It being dark, we could see the cannon vomit forth fire.” Leon is so exhausted that, despite the thunder of the guns, he falls asleep.

On the third day, seven North Carolina regiments, including once again the 53rd and 43rd, assault Culp’s Hill at the north end of the Union line under withering crossfire.

Private Leon, one of the two sharpshooters in his company who survive, records the slaughter: “Here we stayed all day — no, here, I may say, we melted away.” Repeatedly, the North Carolina troops charge downhill through a swale in order to charge uphill, and the result is murderous. “It was truly awful how fast, how very fast, did our poor boys fall by our sides . . . You could see one with his head shot off, others cut in two, then one with his brains oozing out, one with his leg off, others shot through the heart,” Leon writes in his memoir. “I know that our company went in the fight with 60 men. When we left Culps Hill there were 16 of us that answered the roll call.”

Walking on the dead

Meanwhile, 15,000 Confederate troops under the command of Maj. Gen. George E. Pickett assault the center of the Federal line on Cemetery Ridge. The troops include the remnants of the 26th North Carolina in the brigade led by the celebrated scholar General Pettigrew. North Carolina troops under Pettigrew reach the stone wall atop the ridge and almost take the position — until they are repulsed by a point-blank torrent of canister shot and a swarm of reinforcements.

Pettigrew is wounded, his brigade decimated, and about 100 more men of the 26th fall. More than 3,000 Confederate bodies, including the dead from the Pickett-Pettigrew charge, lie on the battlefield — unburied for days. Close to 1,000 of them will never be identified.

Col. Edward Porter Alexander records the grim search for fallen officers: “Negro servants hunting for their masters was a feature of the landscape that night.” More than 6,000 slaves have accompanied Lee’s army. Alexander brought along two. Col. Isaac Avery’s slave, Elijah, retrieves his master’s body from the field and buries him along the line of retreat in Maryland.

On the first day of battle, Tillie Pierce, a pretty 15-year-old blonde who lives in Gettysburg and attends the Young Ladies Seminary, takes refuge in the home of Jacob Weikert, the father of a schoolmate, near Little Round Top. When the fighting surges around the house, they flee again. Of her return after the din of battle has receded, two days later, she writes, “Upon reaching the place, I fairly shrank back aghast at the awful sight presented. The approaches were crowded with wounded, dying and dead. The air was filled with moanings and groanings. As we passed on toward the house, we were compelled to pick our steps in order that we might not tread on the prostrate bodies.”

Like many homes in Gettysburg, the Weikert house is filled with wounded soldiers from both sides, many of them with mangled limbs. Surgeons work their saws and knives in plain sight, amputating arms, legs, hands, and feet. They probe for bullets, while an assistant holds a cow horn over the patient’s face to administer chloroform.

For months after the battle, the stench from the unburied or shallowly buried corpses remains so pungent that locals carry bottles of peppermint oil or pennyroyal to blunt the smell.

A Vermont soldier describes the condition of bodies left on the field in the July sun for days on end: “The faces of the dead, as a general rule, had turned black — not a purplish discoloration, such as I had imagined in reading of the ‘blackened corpses’ so often mentioned in descriptions of battlegrounds, but a deep bluish black, giving to a corpse with black hair the appearance of a negro.”

On the Forney farm, overrun on the first day of the fight, the bodies of 79 North Carolinians lie side by side in a neat row exactly where they fell, cut down by a surprise volley fired by soldiers concealed behind a stone wall.

Because the battle has been fought well beyond the reach of Confederate authority, there is no practical way to recover the bodies of the dead North Carolinians and bring them home for burial, though some families try.

The retreat of Lee’s army turns into a series of running skirmishes, with more casualties. Pettigrew is killed by a Union cavalry trooper, who is then cornered in a nearby barn by enraged Confederates who swarm him and crush his chest with a stone. Pettigrew’s slave, Peter, conveys his body home.