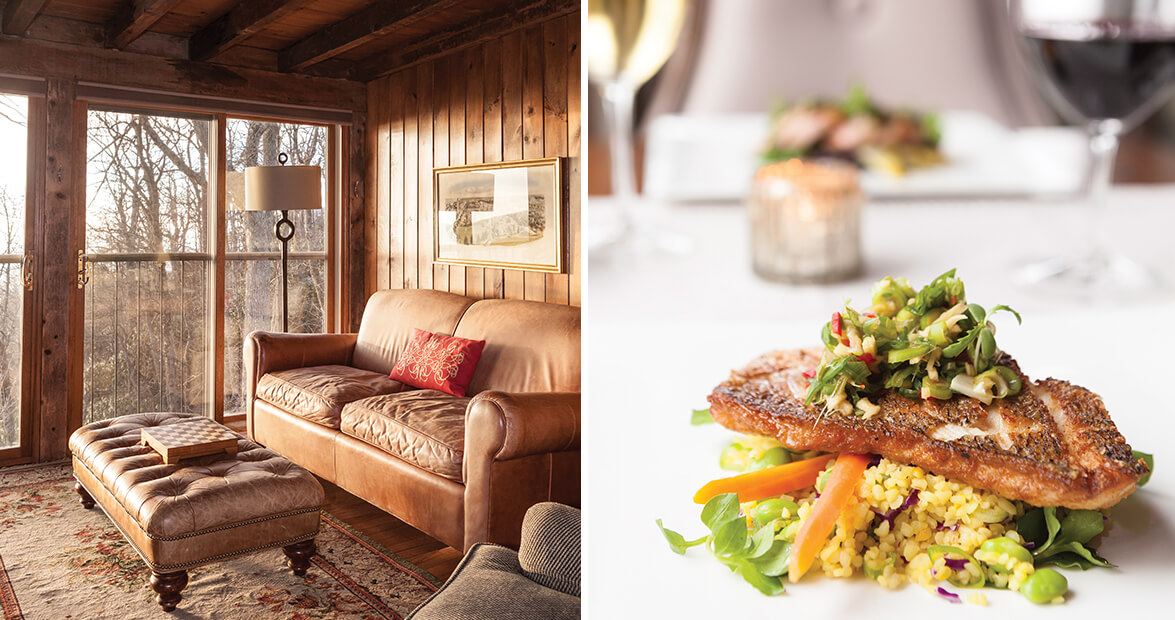 One afternoon about 15 years ago, Cindy Milner noticed a car idling in front of her inn. She went out to see if it was a guest needing a hand with luggage or just an onlooker, curious about the stone house atop the steep hill. Instead, it was the past come for a visit: the elderly Lindau sisters, Judith and Nancy, who’d spent their childhood summers in this remarkable home near Blowing Rock.

Judith decided to come in for a peek, while Nancy stayed in the car, convinced that “we’d ruined everything,” laughs Cindy, who has owned Gideon Ridge Inn with her husband, Cobb, since 1998. The 10-bedroom house was built in 1941 as a summer retreat for the Lindaus, a Boston family who wanted a secluded haven from the spreading anti-Semitism of the war years. Perched on five acres — most of it straight down the mountain — the home was designed to take advantage of Blue Ridge vistas that unfold in blue, gray, and green.

While it’s cozy by the fire in fall and winter, the house was made for open windows and mountain breezes. That’s how the Lindau sisters experienced it, Cindy says. “We try to keep it as close to being a summer home as possible.”

It’s hard to find a place without a view here, from the sitting room with its original French doors and windows, to the covered porch, which overlooks rhododendrons that burst into hot pink and purple every June.

Guests who discovered the inn when Cobb’s parents owned it in the ’80s and early ’90s came for a quiet, homey getaway with hot breakfasts, home-baked breads and simple suppers. When Cindy and Cobb left their corporate lives in Chicago to take over, they found a ready-made roster of loyal guests, but they wanted to attract new visitors, too. So the rooms got a few updates, as did the menus for breakfast and afternoon tea.

Dinner has seen the biggest changes. Hunter Womble, the young chef and inn manager, is constantly tweaking the small, seasonal menu. Local farmers drive up with a few pounds of whatever’s fresh; ducks, chickens, and mushrooms are local, too. Womble’s sorghum mustard gives a jolt of sweet heat to slices of country ham, cured and aged on his family’s farm.

Young couples from Charlotte and retirees from Raleigh arrive, recharge, and set off again. For the Lindau sisters, this was a temporary sanctuary, too. When Judith walked into the house — for the first time since girlhood — what she asked to see first was the view. In her day, the trees and thickets had been cleared to make room for a carpet of pansies and a nearly 360-degree panorama of the mountains. But nature has come roaring back, with trees, branches, and blooms framing views, and memories, anew.