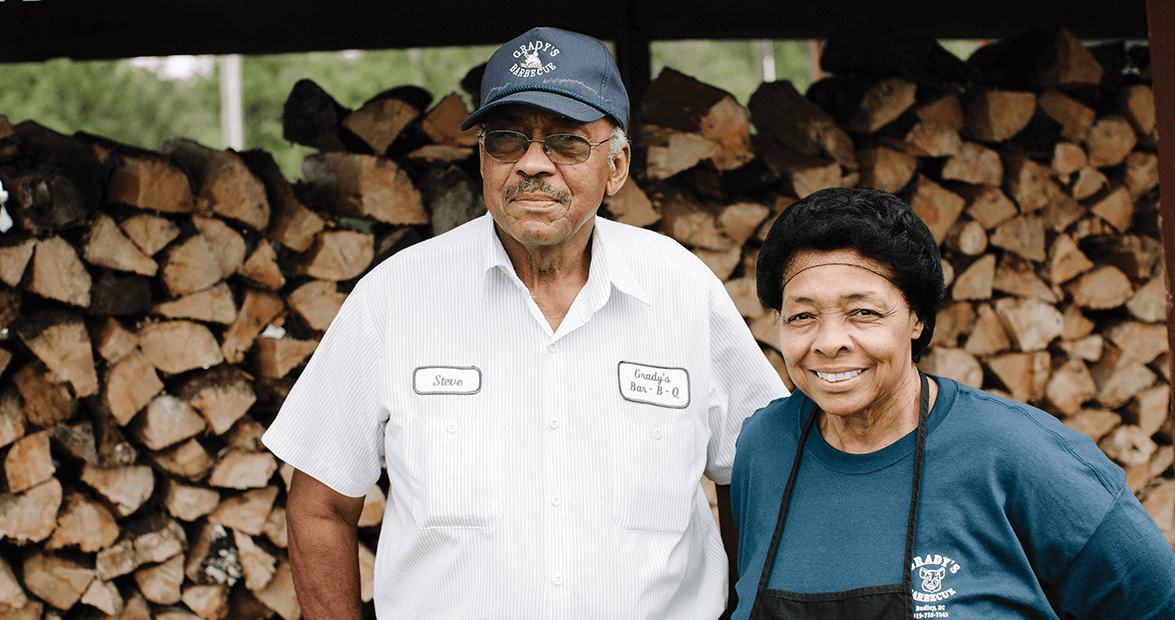 The coals are finished. By 8 a.m., splintered hickory and oak give way to a heap of smoke-tinged, whole-hog barbecue. You’d be hard-pressed to find someone who doesn’t pine for the slow-cooked meat Steve Grady prepares four days a week at his cinder-block building in Dudley. But locating someone who would like to do his job is another story.

“Nobody wants to fight grease and sweat like we do,” says Gerri Grady, Steve’s wife, who runs the restaurant with him. She learned that lesson on her first day in 1986 when her brother-in-law started the restaurant. He opened it on a Friday and decided by the start of Saturday he was done with barbecue.

Steve’s brother told him, “I can’t stand the smoke. There ain’t nothing about it I like.”

But Gerri did enjoy it, so Steve’s brother made him an offer: He’d sell the business to him for less than he paid. About three weeks later, armed with loans from the bank and Steve’s boss from the local sawmill, the Gradys entered the barbecue business. Gerri had recently lost her job at Wayne Memorial Hospital, but Steve still held his job at the sawmill in addition to working on his farm.

“Gerri had one day of experience, and I didn’t have any,” Steve says. But he knew he could handle it, thinking to himself, “I can cook a pig; I’ve always known how to cook a pig.” 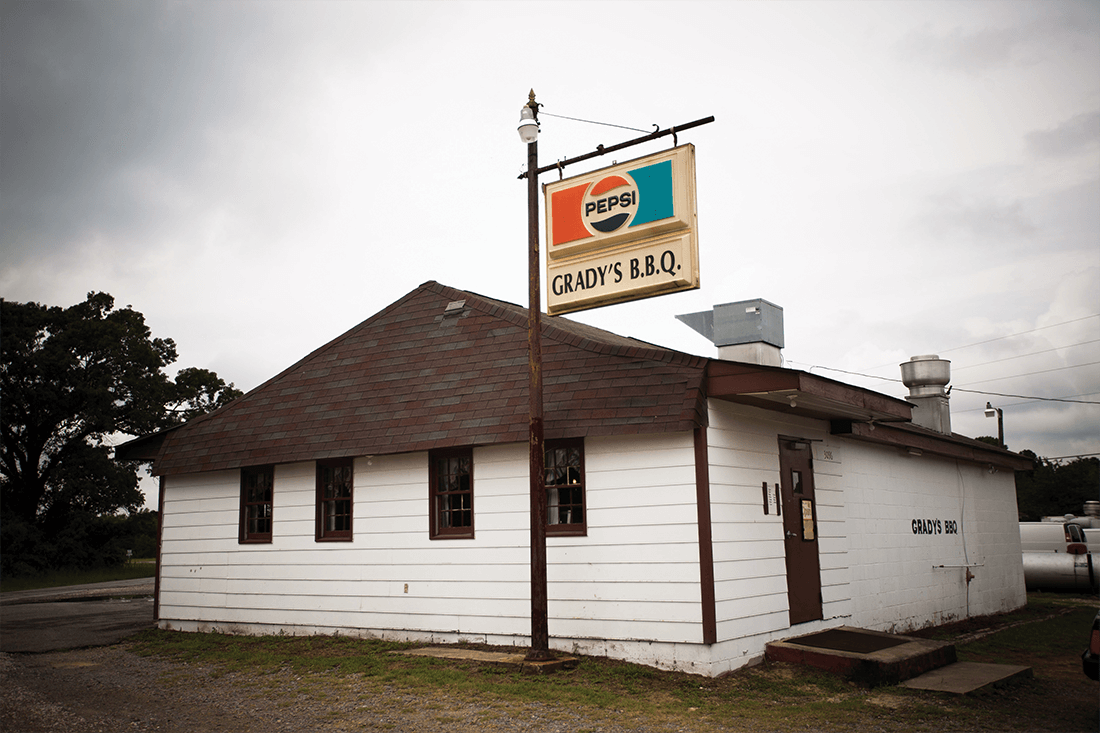 Grady’s Barbecue in Dudley doesn’t need much of a sign. The smell of the hickory and oak smoke is enough to stop barbecue-savvy travelers on Arrington Bridge Road. photograph by Geoff Wood

Steve and Gerri grew up on farms in nearby Seven Springs. And whenever someone in the community held an event, Steve watched his grandfather — the neighborhood pit master — smoke a hog over coals in a hole dug in the ground. The method is similar to the way Steve cooks today. He lights fires in a pit built with bricks that form an eight-inch wall.

“You don’t need something that fancy to cook a pig,” Steve says. “All you need to do is manage the heat.”

The pit house at Grady’s sits a few feet behind the restaurant. And if there’s any question about what happens inside it, the open shed next door provides a hint. Steve chops hickory and oak logs and stacks them inside the shed for all who drive by to see. He receives a call whenever a storm hits Wayne County.

“Usually somebody always has some tree they want to cut, and I cut it,” he explains. The tornadoes that swept through eastern North Carolina in April 2011 left him with a seemingly endless supply of wood. “I might cut a little bit this winter,” he says.

For years, Steve worked at the sawmill, manned the pits, and raised his own hogs. But keeping three jobs — including one that required him to stoke a fire most hours of the night — became too much. “I didn’t have time to tend to [them],” he says of the hogs. So while he still farms 15 acres of hay and 23 acres of soybeans, he now buys his livestock from a grower who lives a mile from the restaurant. The driving route is longer, however, looping around a swath of trees. 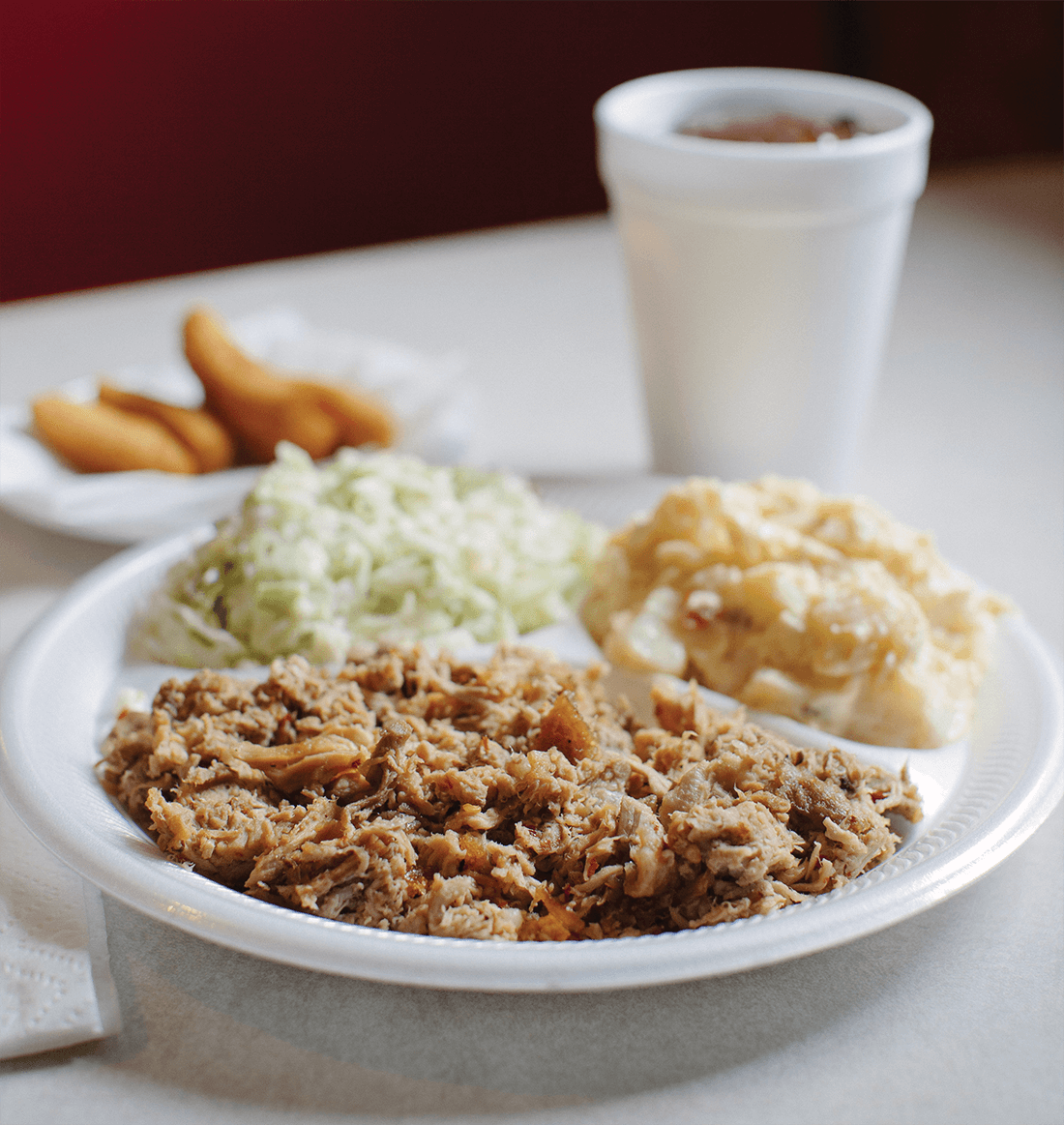 They know that smoke on the outside means plates of flavorful pork on the inside. photograph by Geoff Wood

Steve and Gerri tend to stay away from shortcuts. At the restaurant, Gerri brews tea on the stove top, and peels and chops vegetables for side dishes — stewed collards and cabbage, slaw and potato salad. Like Steve, she learned from working with her family on the farm.

“My mama used to have me in the kitchen when I was 9 or 10 years old, and I learned from her,” Gerri says. “I try to cook like her, my grandmother, and my mother-in-law. They were three good cooks.”

Gerri makes the fourth in that line, adapting family recipes to serve on a larger scale. That quantity was one of the hardest things to master. On the first day of business, most barbecue plates went out with no bread.

“But we did have slaw,” she says. “We got by, and the next week we tried to work it out a little better.”

In the 26 years since, the Gradys have worked it out quite well, appearing in the pages of USA Today and GQ, talking to groups for the North Carolina Barbecue Society and the Southern Foodways Alliance, and serving good food to hundreds. “We’ve had people fly from New York just to have a taste,” Gerri says.

Customers make the hard work worth it, she says, but a few other advances have also eased the Gradys’ efforts. Gerri once used a little black pot for bread making but eventually replaced it with multiple deep-fat fryers.

And three to four years ago, Steve, now 77, found a way to get a little more rest. Instead of starting a fire with wood at 1 a.m. and staying up the rest of the night, he builds the first fire with charcoal at 11 p.m. and is back in bed three hours later. At 4 a.m., he rises to smoke the hog with hickory and oak, finishing by 8 a.m.